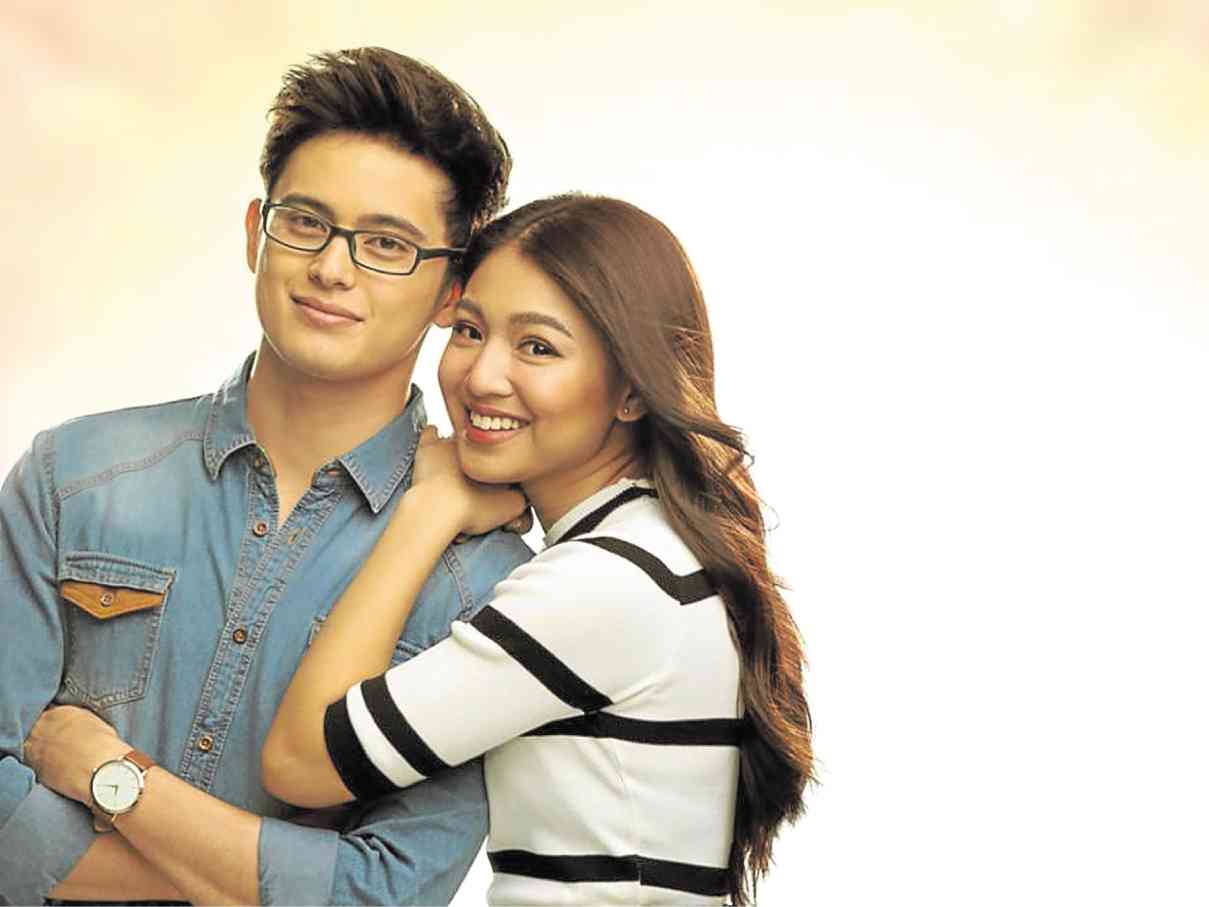 (Ed’s note: This article originally appeared in Scoutmag.ph on February 16 this year, when JaDine made the famous leap from reel to real.)

“Nadine.” James Reid, the usual cool, careless bad-boy, has a smile plastered across his face. He is vulnerable, yet overly ecstatic. The cameras tighten their focus and the huge screens flash his face for the entire crowd to gaze at. The audience was incredibly ecstatic, but the deafening screams managed to soften at just the right instant—enough for him to heave a sigh, and let a few words escape from his mouth. “I love you,” he says to the girl in front of him.

And the crowd goes wild.

JaDine, the phenomenal loveteam of James Reid and Nadine Lustre, has sold out Araneta Coliseum. This is a stadium capable of seating 22,000 people; it is also a stadium capable of cementing a celebrity’s status and prominence in the country. VIP and Patron tickets were sold out a few days after the concert was announced. A week before the event, the whole thing was declared sold out. A few days later, standing room only tickets were released due to insistent public demand. It’s a safe assumption that this is a concert that has drawn a crowd of all ages, from all walks of life: teenagers, students, lovers, barkadas, professionals, parents who gave in to their daughter’s whims, grandparents who gave in to the unexplainable kilig.

“Kilig.” This is a word thrown around casually in the domain of show business. It’s the stuff that love songs, blockbuster movies and sky-high ratings are made of. But it rings truer to some vehicles than others, and at this particular point in time, it fits most effortlessly with these two. JaDine has practically laid claim on the word kilig, and made believers out of even the most cynical. Every single night, on their hit show, On The Wings of Love, James and Nadine as Clark and Leah give viewers a rollercoaster ride of emotions: often blissful, sometimes poignant, never boring. And everywhere else, on billboards, magazine covers, and commercials, the two give their audience a glimpse of who they are in real life: honest, charming, and real.

If there’s another word in the lexicon of JaDine Land that has defied ordinary textbook definitions, it’s this: “real.” Because in the last six months since the show began, viewers have grown to love this crazy game of “taguan ng feelings”—between the characters they play and the stars themselves.

In a nutshell, OTWOL (as the fans have called the show) has a pretty uncomplicated story: simple Filipina girl marries working class Fil-Am boy for a green card. She needs him for the legal status; he needs her for the money she’s going to pay him. They are forced to live together and pretend to actually be married to convince immigration officials that they’re not committing marital fraud.

In all their pretending, they have managed to find a truth. Beneath all the charades, they have conveyed a certain brand of genuineness, the kind you no longer see on television. Or anywhere else for that matter.

Predictably, the characters fall in love, but it’s the way the story unfolded that got the audience sitting at the edge of their seats. The teleserye’s strongest aspect is the fact that despite its very “ordinary” premise, it manages to bring forth a lot of truth and sincerity that a lot of Filipinos could relate to. The dialogue is authentic, the plot twists very realistic. No kontrabidas or kidnappings here; just two young people trying to make things right for their family while they try to do right by each other. It’s simple enough and yet the way their characters were written (and have evolved) have made such an impact. One moment they’re denying what they feel, and the next, they’re fighting for their love. It was all a big farce, until it wasn’t. Before long, they have found themselves in a twisted, beautiful, complicated mess of a love story—one serendipity seemed to have written for them but one they could now call their own.

Wait, are we still talking about Clark and Leah, or James and Nadine?

See, this, this, is precisely why people—myself included—cannot get enough of these two. In all their pretending, they have managed to find a truth. Beneath all the charades, they have conveyed a certain brand of genuineness, the kind you no longer see on television. Or anywhere else for that matter. Every other artista is so eager to play by the rules of the game: land a show, make a movie, flirt with your on-screen partner, keep the audience guessing. Never confirm or deny, and just stick to the script. Appease the fans. But that was never the case for this enfant terrible of loveteams. In fact, they have managed to break practically every rule in the book. James had his parties, Nadine had her video games. James answered back to haters, Nadine made deleting sprees on her Instagram feed. It seemed as if the more they tried to break the stereotypical loveteam mold and remain true to themselves, the more trouble sought them out.

But much to the naysayers’ dismay, what tried to tear them apart only made them closer. So close, in fact, that they found a safe, happy bubble within the set of the show instead. And it translated pretty well onscreen. When Nadine and James were being hounded by issues left and right, Clark and Leah were professing their love. The story flourished, peaked, and eventually reached a plateau—a kind of normalcy almost unheard of in the world of soap operas. How can primetime stars be dealing with fights about overtime work and demanding bosses? How can there be no mistresses, no vengeful stepmothers? It was all so simple, and yet it made sense. These are problems people we know are dealing with. It was real life staring right back at us on screen.

OTWOL has dared to ask very important questions: Love or family? Love or career? When does loving your partner cease and loving yourself begin?

It was probably why OTWOL became difficult to watch for some people, especially in the last few months. The reel part was hitting too close to home. When Clark laid down an ultimatum, I had to switch off my television and shed a tear, not just because I was so blown away by the acting (I was, very much), but because it was a predicament I would never want to be in. It pained me to see it unravel like so on screen, let alone be actually in it. And probably everyone else was thinking the same.

OTWOL has dared to ask very important questions: Love or family? Love or career? When does loving your partner cease and loving yourself begin? In the real world, it’s often these questions that bring us at the crossroads, and the paths we take after define the story that becomes our lives. Some of us may have already made our choices; others may still be dreading the day life dares ask them the same.

Because don’t we all just want both? Love and family, love and career—don’t we all hope to just take a risk and have a shot at having them at the same time? Unfortunately, not everyone can have the luxury of not having to choose. And so we go on with life, feeling a little bit jaded, a little bit disheartened, long after the credits have rolled and the theme song has ended.

And then we think of these two. James and Nadine, both professing their love for their own families, both acknowledging the priority that is their career. Both aware of the perils of giving in to certain feelings. And yet, also keenly aware of what happens when you let go of people you hold dear, as taught to them by the script they’ve read and the scenes they’ve acted out. Perhaps it’s the show itself that brought about these affirmations, perhaps it was already there all along. But regardless, we see these two individuals, who have the privilege of learning from the mistakes their characters have made and choosing to do something that feels like a step in the right direction.

Real—does it begin when reel ends, or does it happen at the same time? Maybe that is only for James and Nadine to know. But if it is for us audience to find out, then, we are only more than happy to continue seeking it. Confirmation notwithstanding, we will see the answer in their partly stolen glances and longing embraces. It is written all over the footprints they left in San Francisco, it is nestled comfortably in between the sweeping piano riffs of Panama’s Always.  The way they have given in to the pretense that is Clark and Leah, the way they have surrendered to the chorus of Bahala Na—they have dared to take the leap that only some of us can truly make in life. Love or career, it doesn’t have to be either-or for the two of them.

“It is what it is, and that’s what I feel about her,” he says, with conviction. The whole stadium roars, but there is a quiet kind of relief that spreads across their faces, the kind that makes them look young and naïve, but also wise and sensible beyond their years. This is what “real”—the kind as defined by the JaDine dictionary—looks like, apparently. She is left speechless, as are we by the revelation, like devotees finally witnessing an apparition.

And for some of us, that is more than enough.

SHAREWe’re not exaggerating when we say that the sneaker game has come a...