Anime fans who’ve mastered the art of reading subs will know what I’m talking about: sometimes you pick up a phrase or a few words, and you can piece together what may be going on in a scene.

Based on experience, it’s not the most comprehensive way to learn the language, but it does put words into context. If you’re more of a visual learner, this might be right up your alley. 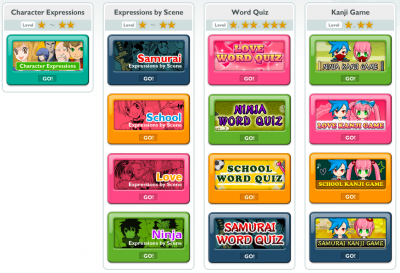 The Japan Foundation Kansai Center created this study site as a learning resource for anyone interested in learning the language. The site offers a range of quizzes of varying difficulties in four anime genres: school, romance, ninja and samurai.

Shoujo and shounen fans alike can enjoy immersing themselves in scene-by-scene playthroughs in their genre of choice. As someone who watched “Ouran High School Host Club,” “Sailor Moon,” “Gintama” and “Naruto” so much in their childhood, I’m here for it.

You can also take a dive into learning Kanji, which closely resembles traditional Chinese characters. Kanji is one of Japan’s writing systems and is often found in manga, along with katakana and hiragana. There are thousands of kanji characters, but don’t worry―the kanji quizzes have novice and expert modes so you can set the pace however you like.

The Japan Foundation has more language learning resources, some of which focus more on culture and everyday conversations. You can even try and find friends in virtual communities to talk about anything and everything related to Japan. There’s more to love about Japan than anime and manga, after all.

SHARESometimes, we don’t want to book a rocket to the moon or interpret...

SHAREToday’s episode of “Unang Hirit” got chairman of the Philippine Red Cross, Senator...