We’re all for representation, but only if it’s done properly. Because sometimes there are media entities who intend to give a platform to diversity, but end up leaving it in the hands of people who are out of touch with that reality—like Marvel allowing a cis man to write the very first nonbinary superhero.

Their twin brother? A defensive-type hero who can conjure shields for people in danger called Safespace. Look, I understand what they were trying to do here, but the twins Snowflake and Safespace are literally colored solid blue and pink, respectively.

In an attempt to “reclaim” these slurs and gendered colors, the writer may have inadvertently created caricatures. The whole idea of fair representation is to have these minorities step away from the unfair stereotypes, not written into them and subverted as “reclamation.”

Let’s not forget their trusty teammate Screentime, described as a “meme obsessed teen” who accidentally breathes in his grandfather’s experimental internet gas, which connects him to the internet 24/7. Chuck didn’t have to go through all that, just saying.

Together with vampire rebel B-Negative and magic-backpack user Trailblazer, they form the new “New Warriors” team. If you need me, I’ll go back to reading “Birds of Prey” for now thanks.

The New Warriors are reuniting to mentor the next generation of heroes. @kibblesmith introduces you to…the NEW New Warriors! pic.twitter.com/NEgf1heDVq

As someone who reads Sana Amanat and Stephen Waker’s amazing “Ms. Marvel,” this comes as a disappointment. Quick comparison with how the first Muslim superhero was given a respectable debut: “Ms. Marvel” tells the story of Kamala Khan, an Pakistani-American living in Jersey city. She’s your everyday teenage girl who writes Avengers fan fiction, questions her parents and deals with the day-to-day expectations in a Muslim household.

Here, her life is normalized, not exaggerated. She deals with racist microaggressions, but is shown to be more than those labels—which is what fair representation is about. 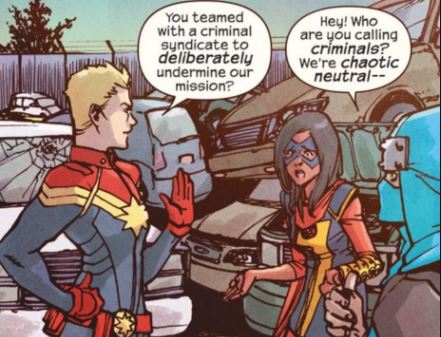 Kamala being unable to defend her team’s alignment to her space mom, Captain Marvel from Ms. Marvel Vol #11

Fingers crossed for “New Warriors” though, and hopefully they save it by hiring the people they want to represent.

SHAREPasig City Mayor-elect Vico Sotto makes it clear: He has no plans of...