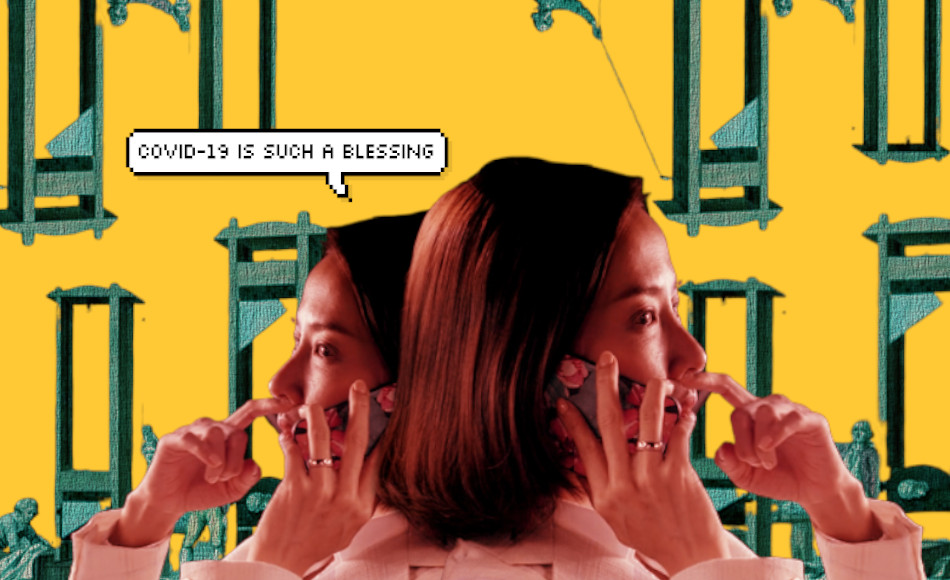 Sorry, Drew Arellano and other elites: We are not the virus and COVID-19 is definitely not humanity’s cure (‘cause hello, it’s a fucking pandemic). Just see how everybody’s lives have been turned upside down half a week into lockdown.

From the littlest nuisances like cabin fever to big-scale problems like the suspension of public transport, our daily routines have drastically changed. A lot of us are suffering—but it’s the working and lower class who are suffering the most.

Three million workers prepared for the worst morning rush hour last Mar. 16. People struggled to get to their jobs, suffering even more on their trip back home, with health workers having to walk for two hours after their shifts just to rest and contractual workers (who have no work-from-home privileges) wondering if their shifts are paid or not. What makes it worse is people with their Netflix and chill on thinking that these three million workers have a choice in the matter.

Newsflash: You’re too privileged to understand the plight of the poor and it shows.

It’s a combination of people-in-power like Presidential Spokesperson Panelo and out-of-touch influencers in social media. They have been hosting pointless press cons ever since the outbreak started. And to tell us what? To stay at home and eat a banana while you’re at it (which will not combat COVID-19, by the way). None of the press cons ever started on time and for what? A few vague details and appeals to emotion? Please.

Remember that scene from “Parasite” where the rich family slept comfortably in their homes, while their helper’s family rushed to their house and saved whatever furniture they could from the flood? The next morning, the mom called a friend to say how the rain was such a blessing. Folks who say COVID-19 is a blessing in disguise have the same energy as this meme:

this moment in parasite… just speaks for itself, doesn't it pic.twitter.com/w9jLejpoEb

Cat Arambulo’s Instagram story is everyone’s fave example. She blasts workers getting arrested on TV, saying: “God, why don’t you motherfuckers just stay at home?” On Twitter, there are also reports of rich people bragging about their yayas for panic buying for them. They laugh, brag and mock people who are struggling out there—folks walking five hours to get home.

The work from home policy isn’t applicable to everyone’s jobs, such as those of frontliners and medical workers. Let me spell it out for you: For folks who are not made of money like you, not working a single day means not meeting basic needs during the lockdown.

This is Cat Arambulo. A rich, elite social influencer cursing out WORKERS, daily wage workers, no pay no work labors, for going out to work or else their family will starve. Parasite isn't just a movie. It's our reality

Save your lame-ass attempt on TikTok stardom on drafts, log off your Netflix account and get your thousand-peso Brazilian blowout head out of your ass. Here’s how the government’s lack of preparation fucked over millions of Filipinos’ lives.

For some people, going home means risking their lives

People run to reach the border of Batasan in Quezon City and San Mateo, RIzal after they were given around 30 minutes to cross by PNP personnel manning the checkpoint before closing it after declaration of "enhanced community quarantine." | via @DemayoMark #COVID19quarantine pic.twitter.com/SHdZXPr9co

Before the lockdown was properly announced, military personnel were already placed in some checkpoints across Luzon. The Philippine National Police (PNP) gave people from the border of Batasan, Quezon City and San Mateo, Rizal 30 minutes to run shortly after the lockdown was announced.

In this video by ABS-CBN, we can see frightened and exhausted faces running for their lives. There were gun-strapped PNP personnel whistling for them to go faster. This video alone is just the tip of the iceberg on how badly is handling the Luzon-wide lockdown. Through these actions, we can see how people in power lack remorse and understanding when it comes to the working class. And it will only get worse as the lockdown continues.

If you’re a worker with no private vehicle, you’re fucked

Starting Mar. 16, employees who had no choice but to travel or commute to their jobs struggled the most. Public transport options were little to none during the start of the week. Since the transportation ban was implemented, frontliners, medical professionals, factory workers, construction workers, vendors, street sweepers and more had a hard time going to their respective workplaces.

Why do they still go to work and not choose to stay home? ‘Cause they have no choice. As the classic Sylvia La Torre tune goes: No money, no honey and basic human needs for a week.

“To be frank, I don’t see the point of [setting up checkpoints at the border]. So what are the military officials doing there? Just standing around and causing traffic jams,” says Jay. Meanwhile, some citizens decided to reach out to the Metro Manila Development Authority (MMDA) through Messenger.

When asked about their alternative options if a person doesn’t own a private vehicle, the MMDA admin responded: “Wala po, sir.” Don’t you just love that lack of empathy from the powers that be?

LOOK: A stranded health worker waiting along the intersection of Edsa and Roxas Boulevard, Pasay City carries a note, "I'm a nurse, pasabay po!" She, along with two other commuters, were on the way to Cardinal Santos Medical Center in Greenhills, San Juan on Wednesday, March 18, a shuttle service for health workers moments later arrived to give them a ride. ? | Richard A. Reyes/Philippine Daily Inquirer

Medical professionals and frontliners are our heroes in all of this. Regardless of the pandemic’s risk and the lack of funds, they still do their part to save lives. It’s unfortunate that though they’ve been here for us since the beginning, we seem to not be there for them—the perfect example of which would be the lack of shuttle services for frontliners when the transportation suspension started.

According to pediatric neurosurgeon Ron Baticulon’s tweet, two ER nurses from the night shift walked from Philippine General Hospital (PGH) to Baclaran, hoping to get home to Cavite. These nurses begged for the police’s help—to which the policemen allegedly replied: “PGH dapat ang mag-ayos niyan.”

At one point last Mar. 17, PGH lacked nurses since they were having a hard time commuting to the hospital. “Currently lacking nurses in some hospitals because public transportation is suspended.

There were other stories of frontliners walking long distances. After their shifts, they endured added anxiety over how to go home. Fortunately, there are government officials like Vice President Lenny Robredo and Mayor Vico Sotto who did their part to accommodate them.

Robredo gave free shuttle services for frontliners the day after the transportation suspension. Although the Department of Interior and Local Government denied Sotto’s request, he found an ally at Global Electric Transport (GET). They provided Pasig with zero-emission vehicles to aid frontliners in traveling to and from their jobs. Take that, petty government boomers.

The elderly and the homeless have nowhere to go, arrested at worse

Elderly and homeless people flock to Manila bay boardwalk to take shelter from the threat of the novel Coronavirus. “Authorities told us to stay home. We have no home,” says 68 year old Lamson. “We’re not afraid of the virus. We’re more afraid of hunger and the elements.” #philippines #everydayphilippines #everydayeverywhere #covid_19 #lockdownph #onassignment for @nytimes

The quarantine hits the elderly and the homeless harder than the rest. People with homes can participate in the Luzon-wide quarantine with ease. And presumably, younger workers can somehow endure long distances (although it will, of course, cause fatigue). What about 70-year-olds with ailments? Or what about folks who don’t have homes? Where will they go?

In CNN’s coverage of the suspension, they spotted a 64-year-old man walking from Floodway, Pasig City to Greenhills, San Juan in order to get his 84-year-old employer some medicine. Rappler reported how cops arrested a 69-year-old homeless grandmother for violating curfew hours. In their piece, she is facing three charges, including prohibiting resistance and disobedience of authority.

She hurled insults at the barangay officials who reprimanded her for violating curfew. If you’re homeless, we suppose you have to find a way to quarantine yourself—which is impossible ‘cause you don’t have a home. For her violations, she is faced with a P100,000 fine and up to six months of imprisonment.

It only goes to show how anti-poor this authoritarian state really is. If you’re still ranting about why folks just can’t stay at home, here are the reasons you’re looking for. Homelessness, the daily grind of our labor force and the elderly who have to go on in order to stay alive.

Hello influencer, meet 68yr old vendor Carlota. She doesnt earn from clicks or likes. This morning she was forced to walk for 2hrs from Caloocan to Divisoria because there was no public transpo. She needed to buy veggies, so she can sell & earn. Otherwise, she earns nothing. pic.twitter.com/6nGz6jFqJG

The month-long quarantine is hitting laborers who depend on daily wages to get by. Vendors and public transportation drivers are struggling to cope with the quarantine’s restrictions. It is something none of them have prepared for, something they barely have any emergency funds for.

Read more: Just a reminder: give a damn about workers’ rights

SHAREI haven’t followed any sport in quite some time. I know nothing about...