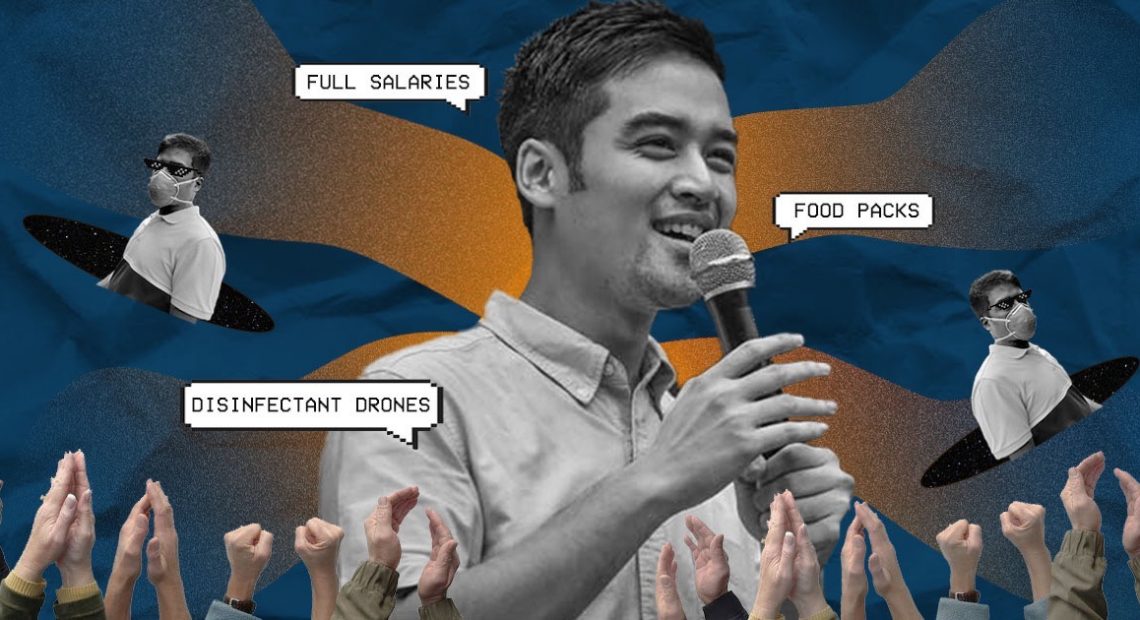 “[Mayor Vico Sotto] is the best gift ever to Pasig City,” Senator Panfilo Lacson said on Mar. 19. What a grand remark. What was Sotto even doing that deserved such high praise?

Well, the 30-year-old mayor was seen distributing medical supplies and fronting a makeshift counter made of supply boxes—one of his many ways to combat the threat of COVID-19 during Luzon’s month-long lockdown (or, uhm, “enhanced community quarantine”). Considering each action individually, he’s not performing some kind of magic. He’s a mayor, and serving his people—especially during a pandemic—is simply part of his JD.

But how come he’s topped the Twitter charts for days? And not even because of some problematic statement (which many politicians conveniently defend as “taken out of context”). People keep reposting his interviews, defending his views via #ProtectVico and even making Vico cup sleeves—all because he is doing his job. But considering how stories of neglectful officials are the norm, a question worth asking would be: Can we blame ourselves?

Read more: Luzon lockdown stories that will make you check your privilege

We don’t want to lionize this public servant, as this is also what Sotto is against. He shouldn’t be treated like a celebrity, his every action taken like a pleasant surprise. But our drought in good governance has pushed us to react happily to his initiatives. We’ve been living in a hole for quite a long time now, that a teensy bit of sunshine is naturally enough to make us jump for joy. We forgot what we deserve from public officials.

Pasig’s Disinfecting Team. Led by Dr. Dancel and our Sanitation Office, we have disinfected all of our schools and other public places. To multiply the city’s efforts, we turned over this afternoon 500 Backpack Sprayers with #disinfectants and full PPEs to our barangays. (Personal Protective Equipment, including hazmat suits, face shields, gloves, and boots) #COVID19 #PreventiveMeasures #HandaPeroKalmado

It’s a sad realization, but we shouldn’t be hard on ourselves for appreciating what Sotto has done and continues to do. Call it the bare minimum, but the Pasig mayor’s efforts shouldn’t be discredited. In a political climate of questionable authority and corrupt anti-poor officials, Sotto going against the system by simply doing his job is a commendable feat. That alone is worth the acknowledgement.

Read more: This millennial wants to end the reign of a Pasig dynasty

Acknowledging what Sotto does is a step towards remembering, again, what we deserve from public officials. In the middle of the COVID-19 pandemic, we’re reminded that someone empathetic and proactive will make things better. Sotto isn’t a star. He, instead, embodies what a leader should be doing in a crisis. And trapos better take notes.

Here are instances that prove why Sotto’s leadership should be the new norm.

More transparent than my 3 a.m. tweets

Receipts? Sotto always has them. This may be one of his overlooked traits, but this is just as important as his ability to churn out solutions. In an interview posted by Jeff Canoy, the mayor revealed the LGU’s expenses in setting up mobile kitchens for the frontliners—even if nobody exactly asked for receipts. “So ang lumalabas po, gumagastos kami dito ng P153,000 [worth of food packs] per day. Per meal po, nasa P38.”

On social media, you could also see how he makes efforts to disclose his offices’s regular expenses—in digitized copies at that. From food to vitamins, his people wouldn’t need to wonder where their taxes go. Can’t the whole country be afforded this kind of security?

Pro-people leadership (as it should be)

Aside from fighting for workers’ rights and regularizing employees, his initiatives during the COVID-19 pandemic also prove to be pro-people. Because of the “enhanced community quarantine,” members of the working class face the risk of not getting paid. But Sotto quickly addressed this problem.

According to Inquirer, Sotto made sure that regular, contractual and job order employees would get their full salaries. This was in an executive order “identifying offices under an alternative work arrangement.”
He also pledged to give hazard pay, overtime pay and other benefits to frontliners. In building the mobile kitchen for frontliners, he also shared how this could help them lessen their tasks for the day, given that they’re already tired from work. We stan a leader who sees the bigger picture.

Keeps his promises (not people’s money)

Although he still has his full term to prove this, he made a good start a few months ago. Sotto has been able to curb corruption—one of his long-standing goals—in his office. In a Facebook post last December, he revealed that Pasig was able to save P150 million because of their “open and honest public bidding for the city’s goods and services.”

As for keeping promises, it looks like he’s sticking to what he swore by during his mayoral campaign. In his interview with Karen Davila in April 2019, Sotto shared his plans to earmark P2.4 billion pesos (almost a quarter of Pasig’s P10.7 billion budget) to implement a universal healthcare system. Fast forward to this pandemic, we see how much he really prioritizes this.

Sotto is walking his talk through the purchase of sanitation tents, disinfectant drones, sets of backpack sprayers and more to combat the virus. Dahlia Hotel Pasig has also been converted into a quarantine facility. Regular rounds of disinfection have been held all over the city.

Contrary to popular (and corrupt) practice, he has a basis for everything

Instead of spearheading impulsive, poorly-made decisions, Sotto’s moves rely on his risk assessments. When mass transportation was suspended in Luzon, he appealed to the national government to allow tricycles to operate, so they can aid the travel of frontliners, employees under essential services, and those who need to go to the hospital for emergencies.

Unfortunately, the national government didn’t allow this initiative, claiming that it goes against the goal of “social distancing.” The Department of Interior and Local Government also told Sotto to be “more creative.” They allowed Manila Mayor Isko Moreno’s e-trike initiative, though.

Good thing Pasig now has eco-friendly shuttles called Comets, which offer free rides to frontliners and city personnel. There are Bike Share units too. I guess those are creative enough.

2) Kasama sa trabaho ko ang pag-report ng ginagawa ng LGU. but our social media team is composed of only 2 ppl, and we can’t rly control what goes on here. pic.twitter.com/hwsCJXKG0D

Vico Sotto has proved that empathy with action is the formula to good leadership. So to those who make Vico Sotto fan edits? We don’t blame them one bit.