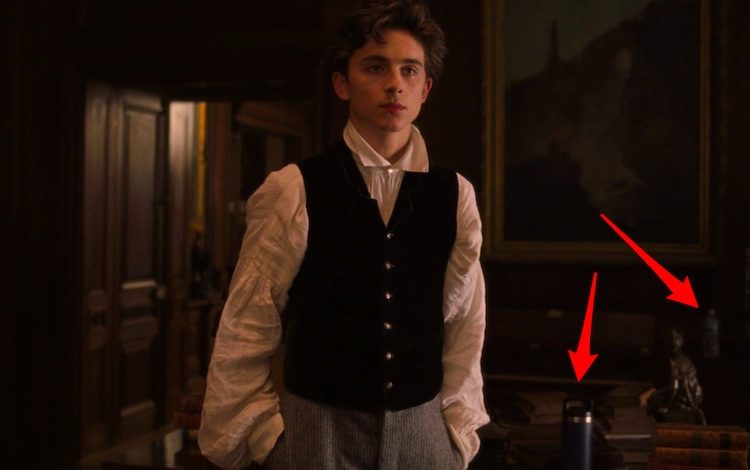 Remember the Starbucks cup on that one “Game of Thrones” scene? Well, it seems like the industry has yet to learn from its mistakes—that, or it’s just an easter egg defining our times. Count “Little Women” among those who’ve made this blunder, as fans have spotted two things that seem out of place: a Hydro Flask and a plastic water bottle.

Over on Twitter, @DUNENATION pinpointed the unlikely set props sharing a scene with Timothée Chalamet. According to Teen Vogue, the Twitter user was alerted through a TikTok video made by @madelynrancourt, who zoomed in on the objects right behind Laurie’s shoulder. “[They’re] just casually sitting there during some of the scene,” @madelynrancourt says.

PLEASE THE HYDROFLASK AND WATER BOTTLE I CANNOT pic.twitter.com/KxwFOSAfOL

Read more: Uh, there’s a coffee cup in a Game of Thrones scene

If you want to catch the scene in question, Mashable revealed that this occurs right in the 38:56 mark, when Amy shows up at Laurie’s house after being punished by her teacher.

Is Greta Gerwig taking notes from Sofia Coppola, who intentionally left a Converse sneaker in “Marie Antoinette”? Whatever the case may be, one thing’s for sure: They’re staying #hydrated.

SHAREFrom catcalling to holdap incidents to the infamous budol-budol modus, the streets of Manila can be...