SONA 2020 lewks are dropping, and the category is: “anti-fascist chic” 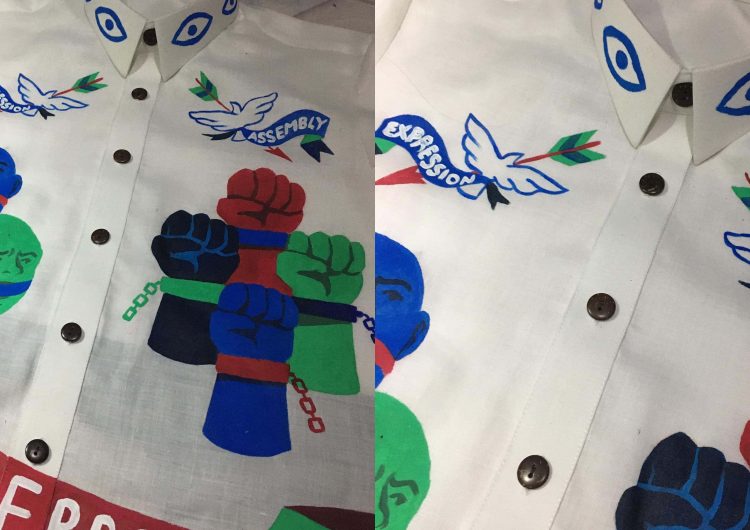 Anyone who tunes in to the State of the Nation Address (SONA) every year remembers at least two things: the president’s statements and the guests’ fashion choices.

Some opt for glam while others seize the opportunity to make bold fashion statements, and we can expect to see lewk reveals from legislators and government officials in the coming days.

The design depicts visibly angry faces with mouths gagged on one side and clenched fists in chains on the other but both awash in what’s obviously ABS-CBN’s color palette.

The concept visualizes SAKA’s interpretation of two pressing issues in the country: ABS-CBN’s franchise denial and the controversial Anti-Terrorism Law, “which stifles the freedom of assembly and expression represented by doves shot through with arrows.”

SAKA has been vocal about their disapproval of the constitutionally challenged law, considering it “another attack on the peasantry whose struggle for free land distribution and state support for sustainable agriculture has been red-tagged and now labeled as terrorism.”

Bayan Muna party-list representative Carlos Zarate will be wearing the barong in the preview. Zarate is one of 11 lawmakers who voted against both the shutdown of ABS-CBN and the enactment of the Anti-Terrorism Law.

This isn’t the first time that the legislator has readily utilized fashion for a political statement, as he has been sporting hand-painted barongs on the SONA red carpet. Last year, his hand-painted barong depicted the dispute between Filipino and Chinese fishermen over the West Philippine Sea.

As our friends over at Nolisoli wrote, “fashion is political” and this is an opportunity for leaders to make timely statements about the issues plaguing the nation and remind us that these issues must be addressed.

It is also an opportunity for us as constituents to watch our leaders carefully, understand the issues we’re facing and truly recognize the state of our nation.