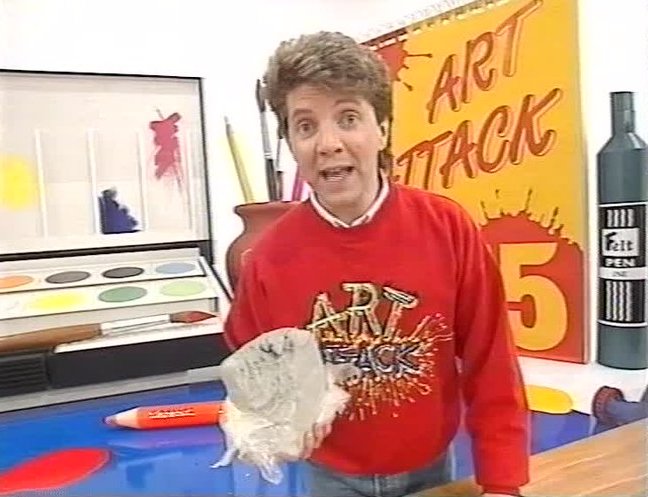 Just like any other kid who thought they were some kind of art connoisseur, I had an “Art Attack” phase. I, too, wondered about the unanswered questions: What the heck is PVC glue? Did they make it up and we just nodded along?

Thirteen years later, the “Art Attack” host is making a comeback. Not to explain what PVC glue was (again, why not), but to deny conspiracy theorists: Original host Neil Buchanan is not Banksy. I repeat: He is not Banksy.

The internet’s latest conspiracy theory involved “Art Attack” host Neil Buchanan, who helmed the show from 1990 to 2007. Twitter users pointed out similarities between Buchanan and anonymous artist Banksy, claiming that the famous street artist’s works sprung up in places where Buchanan’s former band Marseille once played gigs (ICYDK, Buchanan used to be a metal guitarist. Yes, that one’s actually true).

Another user chimed in, saying that Banksy being Buchanan’s Hannah Montana-ish alter ego was entirely plausible. “Neil Buchanan WAS known for his big outdoor pieces utilizing multimedia props and items to craft uncanny replicas,” one wrote. “And then sometimes getting chased down by a perturbed member of authority who he supposedly ‘borrowed’ the materials from.” Coincidence? They think not.

(and then sometimes getting chased down by a perturbed member of authority who he supposedly “borrowed” the materials from) pic.twitter.com/YiW9BnAL2F

While internet folks said “I’ve connected the two dots,” Buchanan was quick to respond with a figurative “You didn’t connect shit.”

“Neil Buchanan is NOT Banksy,” a statement on his website says. “We have been inundated with enquiries over the weekend regarding the current social media story. Unfortunately, this website does not have the infrastructure to answer all these enquiries individually, however, we can confirm that there is no truth in the rumour whatsoever.”

They also added that Buchanan spent the coronavirus lockdown with his family and is now preparing to launch a new art collection in 2021. One Banksy artwork, on the other hand, was last spotted in July inside a London train.

So, there you have it. Neil Buchanan is definitely not Banksy. But that’s also something Banksy would say.

SHAREA lot of users may be dedicated to maintaining a curated Instagram feed,...

Currently crossing out “body shamed by tito/tita.” Hbu, what’chu get?