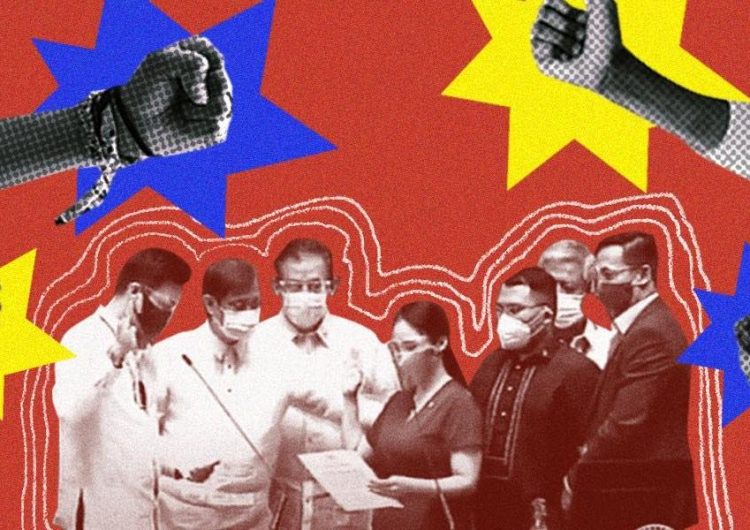 On Oct. 13, Duterte Youth’s Ducielle Marie Cardema (touted as a group repping the country’s younger crowd) took her oath as a newly-minted representative in Congress. But wait—are they even a legitimate partylist in the first place?

That’s the point being raised by several of the country’s youth groups who have taken to protest the proclamation with the hashtag #BlockDuterteYouth. With several pending cases, Duterte Youth (formally known as the “Duty to Energize the Republic through the Enlightenment of the Youth Sectoral Party-list Organization”) has been in the hot seat regarding its legitimacy. The group’s proclamation was under questionable conditions, according to election lawyers and other partylist officials, with some even dubbing it the Commission on Election (COMELEC)’s “most unconstitutional act in its 80-year-history.”

“Hindi kailanman kikilalanin ng kabataan ang Duterte Youth bilang representante nito sa Kongreso,” said Vinz Simon, Anakbayan national secretary-general in a recent press release. “Duterte Youth’s illegitimacy proves that youth representation is not their agenda; their only goal is to get a share of the ‘loot’ from the 2021 national budget and to cosmetically consolidate Duterte’s hold on power.”

HAPPENING NOW: Ducielle Cardema takes oath as the representative of the Duterte Youth Partylist to Congress. Behind her is husband Ronald Cardema. | @NAMercadoINQ pic.twitter.com/gaJxzfAS1E

“The railroading of Duterte youth’s proclamation means worse political and economic crisis,” continued the youth leader. “This means more rampant killings, widespread corruption, and subservience to foreign powers by the national government. Under the COVID-19 pandemic, this means that an effective and pro-people COVID-19 response became farther from reach.”

So, the issues—well, where to begin?

In a letter of opposition sent to the COMELEC en banc on Sept. 21, a group of election lawyers—on behalf of youth leaders—argued that Duterte Youth’s petition to register had not been granted in time for the May 13, 2019 elections and hadn’t been published or publicly heard.

After that, the COMELEC will publish the petition in at least two national newspapers, then resolve the petition within 15 to 60 days—but this should only be after due notice and hearing.

READ: More than a hundred youth formations take a stand vs the impending @COMELEC's proclamation of Duterte Youth's Ducielle Cardema.

"We call on the COMELEC Commissioners not to sacrifice their integrity over this clear as day illegal and unconstitutional act," they wrote.
1/3 pic.twitter.com/Fbucaz2KJH

As reported back in June 2019, a COMELEC division had initially rejected the group’s registration because they hadn’t met those conditions. But plot twist: It was eventually reversed by the COMELEC en banc, voting to accept it instead—even if they did disqualify other partylists due to reasons like “wrong choice of words.”

According to the lawyers, the COMELEC en banc’s reversal, shouldn’t be taken as a “grant of registration.”

“Without first acquiring jurisdiction over Duterte Youth and without prior registration, the Comelec would have no authority to allot a seat to Duterte Youth or proclaim Ducielle Marie Cardema who technically represents a nonentity,” they write. “Under prevailing laws and the 1987 Constitution, only nominees of duly-registered party-list organizations may be proclaimed by Comelec and allotted party-list seats in Congress. Thus, to proclaim Ducielle Marie Cardema would not only be clearly ultra vires, but would be grossly illegal and patently unconstitutional.”

Aside from that main crux, election lawyers have also pointed out how representative Ducelle Marie Cardema was presumed in office too early. The wife of former National Youth Commission chairman Ronald Cardema (who was overaged to become the Duterte Youth rep himself), Ducelle Cardema was already included in the House’s roll call during the special session on 2021’s proposed national budget. This was even before she took her oath later that day.

The lawyer also said that the partylist violated the Revised Penal Code with their presumption.

For Marañon, this is just the tip of the “series of illegalities and unconstitutional acts” made by the partylist. “From the moment they filed their petition to register until now. They seem to cannot even follow very simple rules. Hindi ko maintindihan kung bakit feeling nila exempted sila parati sa lahat ng rules, lahat ng batas, even sa pag-take ng oath office.”

Wait, who should’ve proclaimed it?

Among that long list of issues is the body that proclaimed Cardema’s seat itself—the COMELEC en banc. According to Marañon, it should’ve been the task of the National Board of Canvassers (NBOC).

“Now, we have to take note that the composition of the NBOC and the COMELEC en banc is the same however, under the Constitution, they are two different entities. That is why during the NBOC hearing, sinasabi nila na we are convening as the National Board of Canvassers, not as a COMELEC en banc,” he added. Because of this, an “illegal composition” could’ve taken place, which happens when “a particular candidate is not actually authorized by law.”

With so many laws bypassed and played around by the powers-that-be themselves, it’s no wonder that our system has become less of a mandate or more of an optional thought. We can only hope that the law will continue to prevail somehow—because dura lex sed lex, right?

Our required reading is getting a wider audience (as it deserves)

ManilART, the longest-running visual arts fair in the Philippines, is happening on Oct....