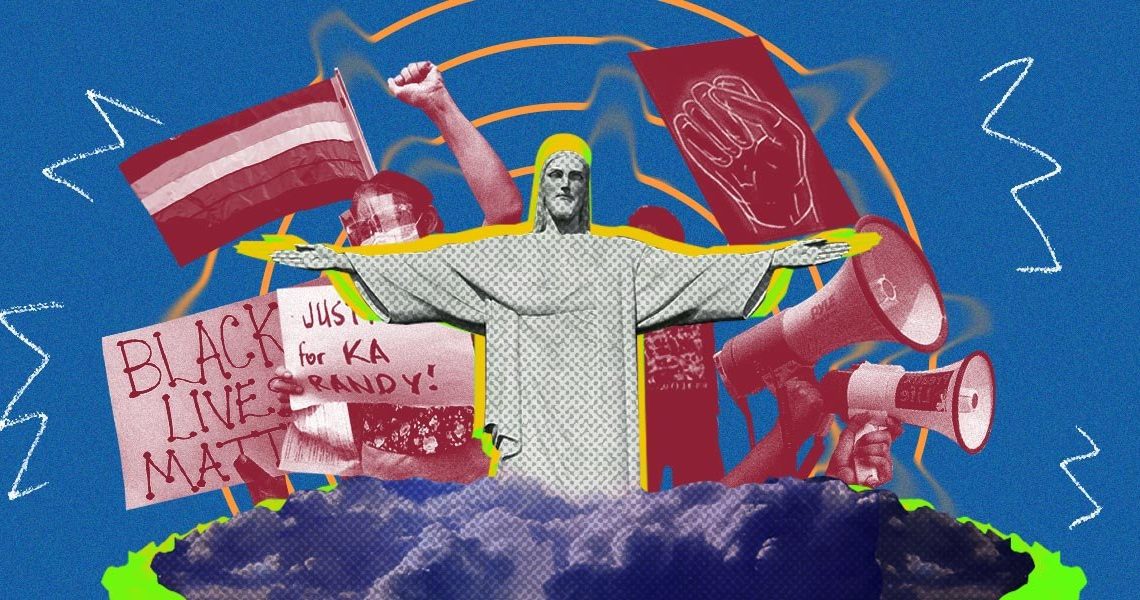 Religion and I have been estranged for a while.

If you’re like me, a queer woman of color with non-conservative views, it’ll be hard to find yourself in the pages of the Bible. I have no problem with religion. There are people who find solace in spirituality and that’s okay. It’s just not for me.

However, the Student Christian Movement of the Philippines (SCMP) made me reconsider my stance for one hot minute.

I interviewed them for last year’s State of the Nation protest. Their representative said something that stuck with me. With eloquence, they explained how activism is the most Christian action you can do.

“Deutoronomy 16:18-20 teaches us to pursue justice, and it obviously involves pursuing the rights and welfare of our brothers and sisters,” says the SCMP. “Just like what Jesus Christ did, Christians must understand the life and struggles of the poor, deprived and oppressed, and uphold His teachings of peace based on equity and justice.”

This interview excerpt came to pass, until Pope Francis released a statement on LGBTQ+ rights. In the new documentary “Francesco,” he voices his support for same-sex couples’ civil rights, explaining that the community has rights just like everyone else.

“If Christ were here right now, he would be the first to accept the LGBTQ+, and fight for our rights to form families.”

“Homosexual people have a right to be in a family. They are children of God and have a right to a family. Nobody should be thrown out or be made miserable over it,” says the Pope. “What we have to create is a civil union law. That way they are legally covered.”

For centuries, bigots used the Bible to oppress minorities, especially the LGBTQ+ community. Conservative lawmakers such as Senate President Tito Sotto and Senator Manny Pacquiao used the word of the Lord to deprive queer Filipinos of their rights. Sotto even went as far as calling LGBTQ+ people “homo sapiens.”

We keep reiterating in our articles that the LGBTQ+ community is tolerated, not accepted in our country. And it’s evident in the state’s apathetic approach to the SOGIE equality bill. And of course, the violence queer Filipinos face every day.

Bible thumpers justify their actions using Bible verses, launching sermons on what happened in Sodom and Gomorrah no matter how unclear the Bible was on what led God to destroy these cities. Regardless of the existence of some Catholic and Christian denominations accepting queer parishioners, majority of the Catholic Church has condemned LGBTQ+ rights for so long. So when Bahaghari spokesperson Rey Valmores-Salinas said on national television that Jesus would’ve been the first to defend queer rights, we had to agree and stan wholeheartedly.

“It’s a huge thing by itself that the head of the Catholic Church, which as we all know has historically been very much against LGBTQ+ rights, recognizes the inalienable rights of the LGBTQ+ community to form families,” says Valmores-Salinas in an ANC interview. “If Christ were here right now, he would be the first to accept the LGBTQ+, and fight for our rights to form families.”

“If Christ were here right now, he would be the first to accept the LGBTQ+, and fight for our rights to form families”. https://t.co/VVHsdWnfut

The word of the Lord has been used against queer people for so long. It has deprived us of civil rights, of basic freedoms and of being true to and unashamedly ourselves. My relationship with religion might be awry but I know well enough that hatred and bigotry are the most unchristian feelings anyone can exercise. Being Christian meant following Jesus’ footsteps. When was Jesus ever spiteful against the marginalized?

“Just like what Jesus Christ did, Christians must understand the life and struggles of the poor, deprived and oppressed, and uphold His teachings of peace based on equity and justice.”

Days like these led me to recall a Rappler opinion piece by Melo Mar Cabello. Around Christmas Eve 2019, he reminded everyone how Jesus Christ was a radical activist since a lot of us seem to forget that fact. He wrote how Jesus confronted problematic social structures and paved the way for the oppressed to seek justice.

“Being born to a peasant family, Jesus became the vanguard of liberation for the marginalized peasant class and stood for truth and justice, which placed him on the blacklist of the state and became the reason for his execution,” writes Cabello. “People should be reminded that Jesus, in choosing the side of the downtrodden, was a radical change maker who dreamt and worked for a better world.”

Conservatives and devout Christians who have twisted views on queer rights should remember what Jesus really stood for. Hopefully, Pope Francis’ statement on queer rights is just the beginning. It’s hard to be hopeful during these times. But screw it, someone has to be.

Read more:
While Duterte’s tired, these young Filipinos remain restless
No, Sen. Sotto, you can’t call queer people ‘homo sapiens’
Allyship 101: How to amplify the voices in the LGBTQ+ community

Photo by Delia Giandeini on Unsplash
Art by Yel Sayo