TW: The images on this list contain body horror, blood and gore. Proceed with caution!

If anyone’s doing horror well, it’s Junji Ito. The same man who penned some of the most visually terrifying manga pages to date and thought this cute gray anime cat is scary. It’s no doubt that Ito, a wholesome man to many’s surprise, has created some of the weirdest and creepiest manga out there, making us think twice about innocent creatures like snails and inanimate objects like chairs.

You may have discovered his works after coming across “Tomie” or even “Uzumaki,” and you’ve since binge read almost every Ito short there is. Every short is just as (if not more) horrifying than the last, and some shorts have been etched on our brains for good.

“The Enigma of Amigara Fault”

This is the source of the “this is my hole” memes. After a strong earthquake, a fault appears on Amigara mountain with human-shaped holes. Even stranger than the holes themselves is that they seem to be calling out to people, telling them to enter “their” hole. Imagining the pitch-black darkness of a human-shaped hole is scary enough, but it’s not a Junji Ito masterpiece if there’s no sick twist added. 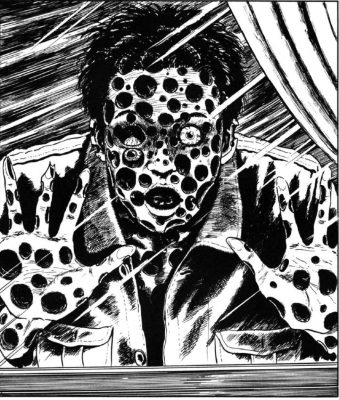 Hello, trypophobia, we meet again. “The Chill” follows Yuuji, who observes that his neighbor Rina has holes all over her body and remembers how his grandfather had the same condition. Soon, he discovers that the holes were actually a curse from a jade artifact, the curse inflicted upon anyone who touches it. It’s not as scary re-reading it now, but the body horror may still be disturbing to anyone uncomfortable with clusters of holes. 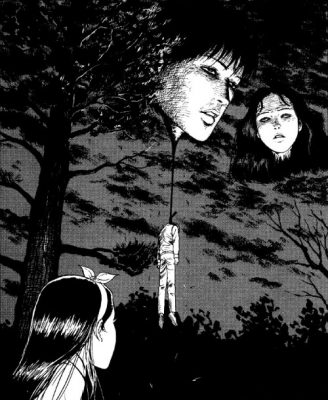 From Junji Ito’s “The Hanging Balloons” 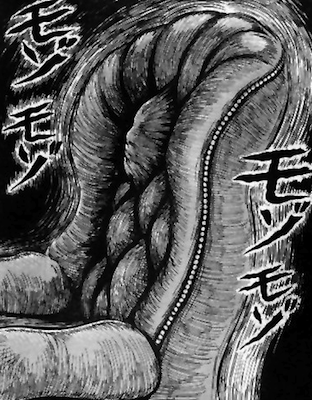 Obsession seems to be a recurring subject in many of Ito’s works, whether over an object, an idea or even a person. In “Human Chair,” a famous author is sent a manuscript about a man who lives in a chair to comfort the woman he admires from afar. It almost sounds like a confession and though the author receives a follow-up letter that it was all fiction, she hears strange noises from her own chair. As a writer myself, I’d be lying if I say I didn’t glance at our sofa chair after reading this manga.

“The Thing that Drifted Ashore” 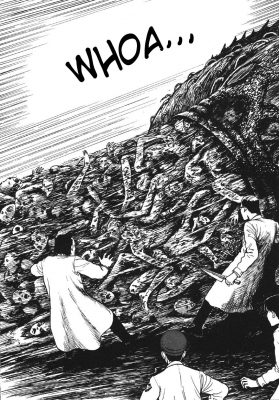 We’ve seen blood-sucking leeches and tapeworms that feed off our guts, but what if humans become the parasites? In this manga, a strange giant worm-like creature washes up on shore and nobody knows what it is, only that it’s dead and the stench is awful. What’s worse is you can see through its translucent skin―people who were lost at sea once, barely alive and feeding off the giant creature’s insides. Maybe what’s more terrifying is the fact that there are things much bigger (literally and figuratively) than us humans, and we are all part of a larger ecosystem with creatures of greater scale. 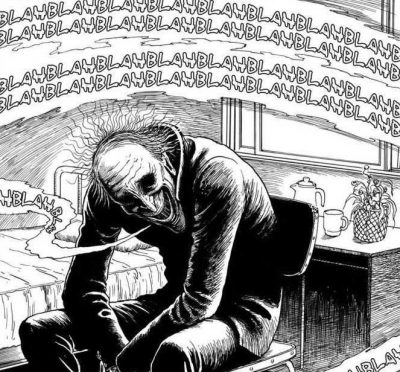 From Junji Ito’s “Voices in the Dark: Splatter,” Chapter 5

Bibliophile check, where you guys at? While it’s normal to love books and take good care of them, the protagonist in this comic has an unhealthy obsession with his home library. Goro meticulously checks on his library every day, and soon meets ghoulish hallucinations of the books that haunted his childhood. Reading someone else’s diary isn’t cool, but his wife had to do something to put an end to his misery.

Rather than the usual body horror short, this comic is more on the melancholic side, touching on the subject of death and our fear of it. A man starts dreaming longer than most people, sometimes even lives alternate lives in said dreams. When he wakes up, his body gets older, even though he may have only slept for a while, and he ponders the possibility of him dreaming forever. It’s scary in a way that it makes you think, what if you wake up to a reality that the literal years you think you’re experiencing right now are all a dream?

Haruhiko’s family business goes around the country performing puppet shows. Their father says he loves puppetry because he gets to control it himself, but Haruhiko’s brother Yukihiko thinks otherwise. It’s the puppet controlling the puppeteer, he says. Years later, we discover that Yukihiko, rich and with his own family  is no longer human and was actually being kept and manipulated on strings. It’s scary to think that this is akin to real life when you deal with the powers-that-be―maybe not literally being manipulated by strings, but we become puppets in our way when we trade what’s valuable to us for something bigger. 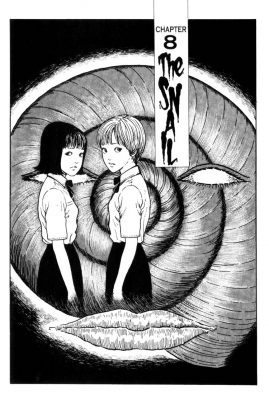 Ito apparently loves snails the same way he loves holes. A few chapters from his well-known work “Uzumaki” feature some humanoid slugs, but this one is the most disturbing. I had to take a moment to think about what I just re-read. Bullied student Katayama only comes to school when it’s raining, and one day his classmates notice that the spiral on his back keeps on growing. He soon turns into a snail, ostracized further at his school. There’s a lot to unpack in this manga: bullying, parental neglect and… snails mating. You heard me. 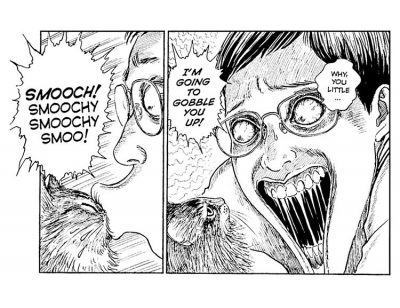 Not really horror, but Ito actually created this wholesome comic about cats, starring himself and his wife Ayako. In this manga, Ito tells us about his experiences with cats as a dog lover, depicted in his signature creepy art style that it’s actually pretty hilarious. Leave it to him to make a wholesome manga about getting a cat look like it belongs in the “Souichi” series.

Header from “The Enigma of Amigara Fault” and “The Hanging Balloons”

SHAREOkay, Adventure Time fans, we’ve got some sad news for you. Even though you might...

SHARE“Four Sisters and a Wedding”—a movie that brought us an iconic confrontation scene,...