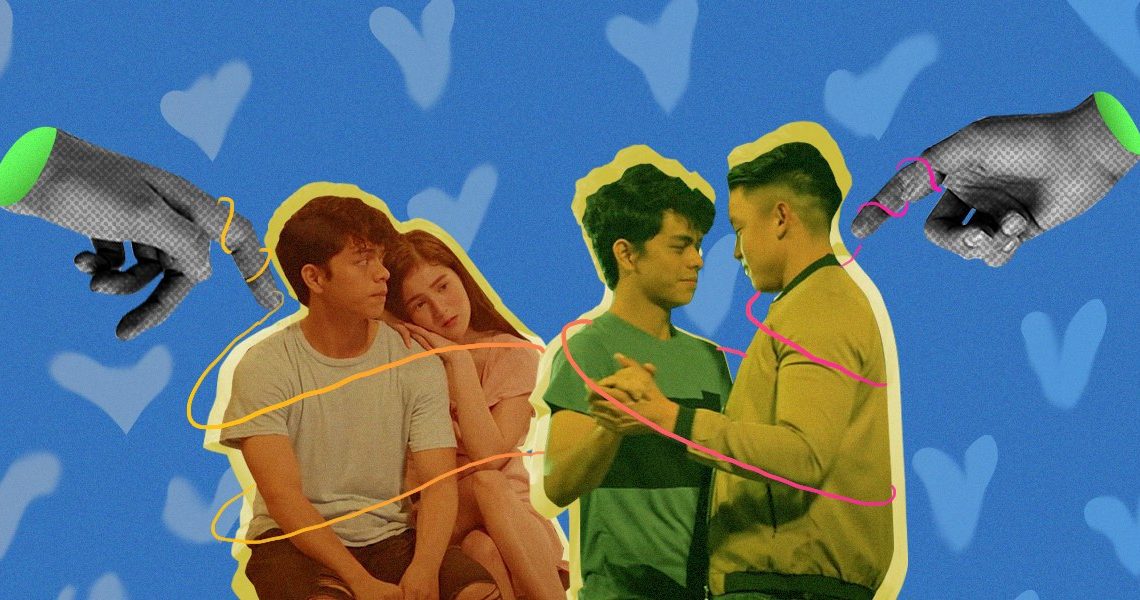 For anyone who’s fallen down the BL rabbit hole―from the widely popular Thai series “2gether” to local faves like “Gameboys”―it’s been a whirlwind romance with tons of new series just waiting for us to binge watch them.

The queer Filipino coming-of-age era is slowly making its mark, treating us to both feel-good rom-com vibes and honest messages on the realities of queer youth. But here’s the thing: Many of these queer stories are (still) categorized as BL or GL, separated from the rom-com genre of your streaming platform of choice.

Enter romantic comedy “Oh, Mando!”―yes, a rom-com. Not just BL, but a rom-com.

“Oh, Mando!” follows Armando (played by one-half of our fave “Gameboys” ship Kokoy de Santos) and his self-discovery journey. He literally has it all: the lead role in a play, great friends, an amazing girlfriend and a pretty fun time at college. But he’s not being true to himself though: He’s been suppressing his feelings for boys despite having a relationship with Krisha (played by Barbie Imperial). That is, until he meets bisexual jock Barry (played by Alex Diaz).

Right off the bat, we’re treated to fuzzy rom-com moments between the characters. But what’s also interesting is we get snippets of the colorful narratives that the series aims to tell: embracing yourself wholeheartedly, acknowledging that love is love (is love) and even showcasing Pride for what it is.

Director Eduardo Roy Jr. took inspiration from his friends’ experiences of coming out and dealing with its aftermath, taking great care to portray the queer community’s sentiments through the little hints of the emotional roller coasters the characters (and possibly we, too) would go through.

“Oh, Mando!” also adopts an ethos to break boundaries through its cast given that Alex himself is queer.

“I feel like, as a person, I don’t need to study for a BL role kasi I have experienced BL in my life. It’s more of being honest with myself.”

His character Barry is openly bisexual, leading a basketball varsity team with members who are pretty chill with their captain’s preferences. Whether or not someone’s preference matters in love, it all boils down to the series’ message: “Love is love is love.”

“Love really has no gender,” Alex says. “If we vibe, if we click, if we get along, babae man o lalaki, and there’s a level of communication na, alam niyo ’yun? Naiintindihan niyo talaga ‘yung isa’t isa, I think that’s what’s important.”

Even Kokoy, who’s had a shot at a BL series with the success of “Gameboys,” agrees, unbothered by the potential stereotyping.

It’s not about who you sleep with. It’s about what you can bring to the table, what you can offer and what talent you possess.

There’s (still) a lot of stigma toward the LGBTQ+ community, across all colors of the spectrum, TBH. With a diverse cast, “Oh, Mando!” tackles the leads’ fluidity and bisexuality in particular, the latter sometimes misunderstood even within the community itself.

Bi-erasure happens and the series reworks the narrative to amplify voices in the community. Alex himself has a thing or two to say about that: “It’s not about who you sleep with. It’s about what you can bring to the table, what you can offer and what talent you possess.”

“Oh, Mando!”’s message on love is for all kinds of it, across the broad queer spectrum and even self-love as seen in the trailer: “Don’t be afraid to be yourself.” Which is something that is at the core of Barbie’s struggles with body positivity and the way she deals with it.

Love has no gender, just as how this series has no particular target demographic. It’s a rom-com for everybody, from the boomers stuck in the boomer mindset to young people who have yet to understand the colorful LGBTQ+ community.

As “Oh, Mando!” joins the list of rom-coms to look forward to, Direk Eduardo hopes that the popularity of queer narratives is not just a fad. It’s the age of the queer self-discovery, and they’re just as real and valid as the coming-of-age stories of heterosexual people.

“Oh, Mando!” is streaming on the iWantTFC app and website starting on Nov. 5.

"I didn't wanna make something that would end up in a landfill in...

SB19 in their ambassador era? We love to see it

SHAREAnother day, another round of topics from the Twitterverse. And this day’s trends...