It’s almost always guaranteed that something related to K-pop is trending every day since it’s not a secret how K-pop fans are devoted to their idols.

While it’s true that some people aren’t exactly fans of K-pop, there’s no denying the K-pop stans’ dedication and support. It could be a hashtag celebrating a music show win, some wack shit like the “Karl Marx versus Jin” beef, or new albums dropping.

E-commerce aggregator iPrice conducted a study to measure this devotion. Using data on their website, iPrice determined how much K-pop fans spend on average if they bought merch, all of their faves’ albums so far, plus concert tickets. 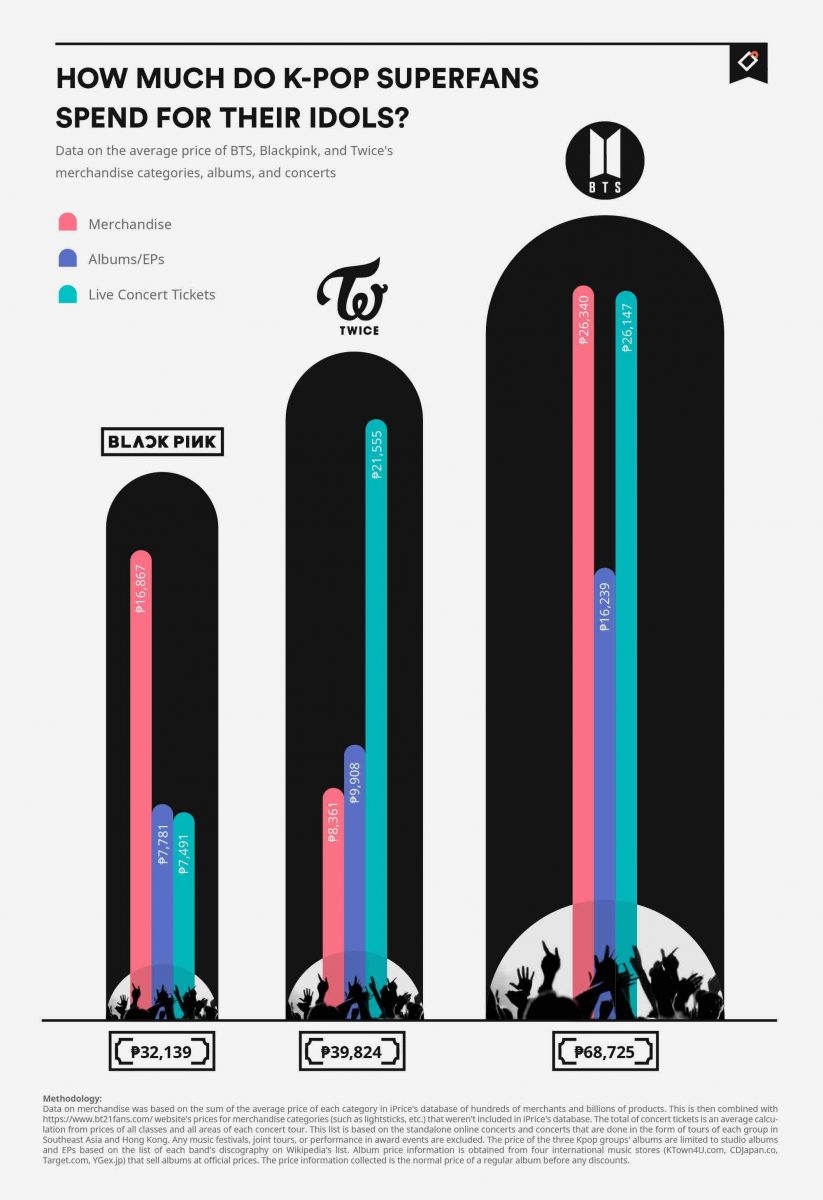 No surprise that BTS fans took the top spot. An average Army would have spent up to P69,000 from buying at least 15 albums and attending at least five concerts. To put that into perspective, the price of iPhone 12 Pro is almost P68,000 on iPrice.

Twice’s fandom comes in second, with the average Once’s spending totaling up to P40,000―14 albums, four concerts and a ton of merch. The average Blink meanwhile spends about P32,000, which is pretty interesting considering that Blackpink is fairly new and has fewer releases compared to the first two groups.

Of course, you don’t need to buy physical albums or lightsticks to be considered a true fan. You’re not a fake fan if you don’t own stuff from your faves’ latest collab with a beauty brand. Your faves won’t be upset with you if you don’t buy their annual Season’s Greetings kit or special DVDs.

As much as these things are great to have, a lot of these merch are admittedly overpriced, the price tag racked up even more by shipping fees if you’re not from South Korea. If you have the means and you’re willing to shell out cash then go ahead, spoil yourself. You deserve that with your hard-earned money.

But your faves will understand if you decide not to give in to capitalist temptations. You can still support them by streaming their music, leaving nice comments on their social media posts, tuning in to their livestreams and voting for them on music shows. Perfect timing, it’s MAMA season now―don’t forget to vote for your faves.

Read more:
These 7 celebs are certified ARMYs (maybe even more than you)
Why I love Park Seo-joon: A “scientific” study
Among Us is sus for gamers’ stress, according to science