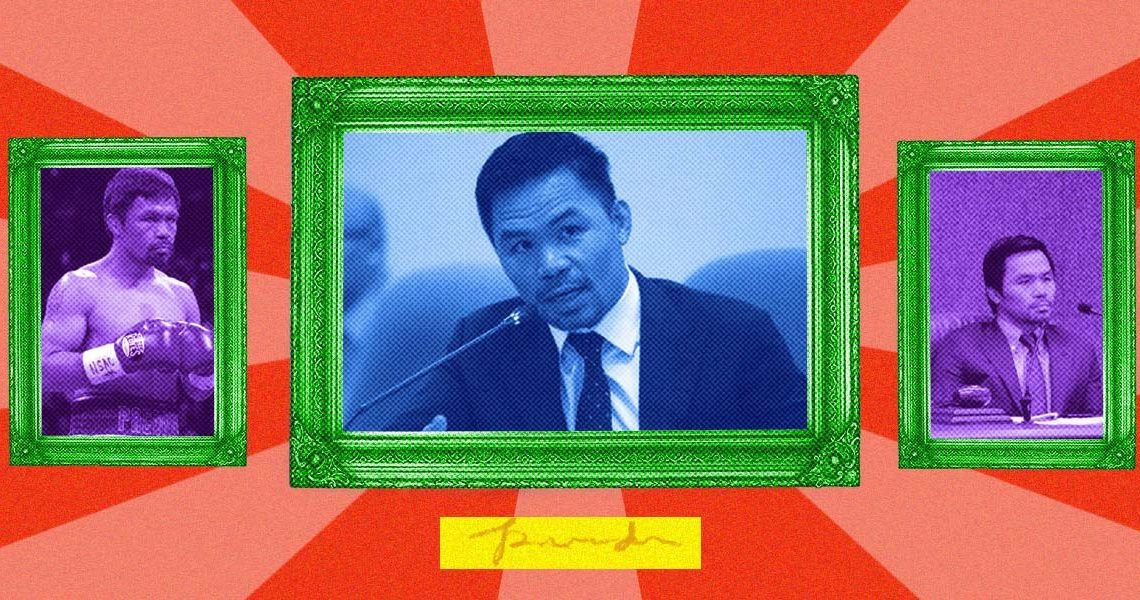 Supposedly, Pacquiao will bring “modern ideas” (according to PDP-Laban executive director Ron Munsayacto) and “more discipline” and “energy” (according to Pimentel) to the table, with an advocacy focusing on “peace and economics” and a vow to “shun corruption.”

We don’t know what those “modern ideas” are yet, but that’s a pretty strong claim about someone who cites an old religious book to make decisions about today’s issues. Now about the party’s new president “shunning corruption,” may we remind everyone that PDP-Laban’s own chairperson, Pres. Duterte, still refuses to namedrop “corrupt” public officials, despite naming some on his infamous drug list and drug matrix in 2016?

We don’t know what kind of “energy” he’ll bring, but we hope it could have been channeled to work, like he does with his boxing career. (Side note: Pacquiao promised back in 2015 that he’d give up “one of his careers” if he wins as senator. Which career that is, it’s not boxing.)

In the last few years, it’s been rumored that Pacquiao will eventually run for president. His former boxing promoter Bob Arum has been saying so for years, with President Duterte even naming the boxing champ as his “successor.”

Pacquiao hasn’t confirmed if those are true, but should he run for president in 2022, he just might have a chance given how popular he already is.  Even his controversial stance on the SOGIE bill, death penalty and his proposal for a National Bible Day have only added to the name recall factor.

Pacquiao may be a generous philanthropist, always ready to lend a helping hand to those who need it, but being in public office requires a different approach and mindset apart from “being a good person.”

But then again, we’re not just talking about Pacquiao and his possible presidential run. We really should keep tabs on elected officials and monitor their fitness for public service.  Popularity and name recall have so far carried the day for so many actors, celebrities and families in politics, and might yet again do so in the 2022 polls with Pacquiao leading the pack.

Let’s keep an eye out for those worthy of our votes, and make sure others know about them. Let’s also make sure we’ll be out there exercising our right to vote and decide our future.

Read more:
Here’s what you need to register to vote for the next elections
Voting 101: Friendly reminders for first-time voters
Your vote matters: Local elections that needed one vote to win

From creative corsets to standout dresses, these garments are peak unique

SHAREBy Nico Pascual Image: Tonyocruz.com Today is the day Rodrigo Duterte is being...