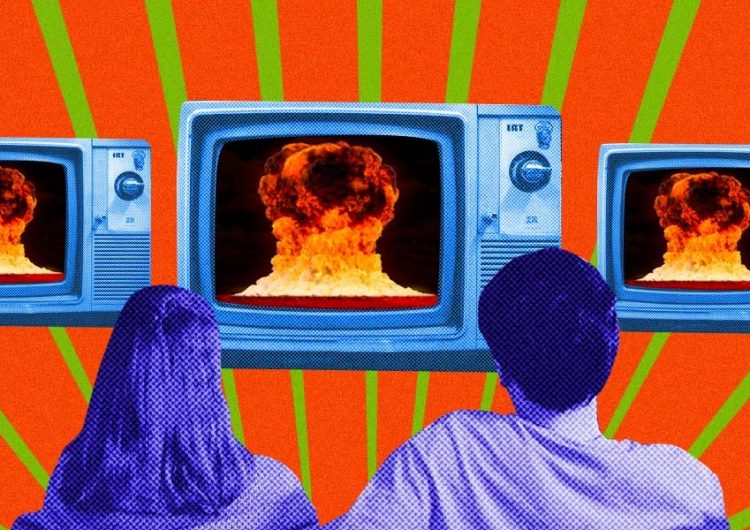 Here’s a POV: You’re in the CEO search of “Start-Up’s” Sandbox. To score the title, you need to submit the best keywords related to “2020.” I bet the lineup screams one thing: whack.

There’s so much to unpack this year that the phrases “in these trying times” and “more than ever” sound like broken-record word vomits. A new month becomes another “Black Mirror” episode—just before you start wishing for a cleaner slate.

But if you’re starting to feel that EOY numbness, let this primer of 20 fucked up events help you look back: people, things and words we should never forget. After all, “bad luck” isn’t just randomly shoved by the universe. (Imagine if we had competent leadership in the mix. How many of these could we have survived?)

If history repeats itself, then for fuck’s sake, we definitely don’t want to repeat this timeline.

Many Filipinos opened their year chasing stocks of surgical and N95 masks (weird that a couple months later, they’d wear them again for a different reason).

After a 43-year dormancy, Taal Volcano had a phreatic eruption on Jan. 12, damaging nearby areas like Tagaytay, and Batangas towns Talisay, Agoncillo and Lemery. The volcano spewed bleached steam, ash and volcanic rocks, and eventually reached alert level 4.

At the height of the crisis, President Rodrigo Duterte and Senator Bong Go were criticized for having a motorbike jaunt around Malacanang. Here’s what Go had to say to people  who called them out: “The President works 24 hours. Can he not ride a motorcycle even for a short while just to remove the stress from work?” On Jan. 20, Duterte urged Congress to secure a P30 billion supplemental budget for the eruption.

Need we say more? Miss ‘Rona hasn’t left our table since Jan. 30, when the first suspected case was confirmed: A 38-year-old woman who traveled to the Philippines from Wuhan, China—the OG epicenter—nine days prior. It was only after the first COVID-19 death in the Philippines (and four days after the first confirmed case) that  President Duterte ordered a travel ban, as he had first thought that officiating it would be “unfair.”

As of writing, the country has 469,005 cases and 9,067 deaths. After nine months of literal quarantine patintero—with cities going back and forth on restrictions—one thing remains constant: the call for mass testing. Nine months into the pandemic, the idea finally dawned on President Duterte, and the Department of Health is now gearing for free swab tests.  “Well I am thankful that somewhat, he said that testing is important. As early as March, VP Leni has been calling for the need to do mass testing,” Office of the Vice President spokesperson Barry Gutierrez said in an interview.

3. Plight of healthcare workers not prioritized

Delayed hazard pay, the ignored call for a time out and the lack of strategy to protect frontliners? Our healthcare workers deserve better. “We are usually painted as heroes and I appreciate that. But we can’t always live up to that expectation. We have a sense of service but we do not have superpowers. We need the support of the government for us to do the job that we signed up for,” said Jairus Cabajar, MD.

4. Our fave hangout places as casualties

This year, we penned one crushing eulogy after another—even for our favorite places. Because of economic distress, our ride-or-die spots had to close down: Route 196, XX XX and Today x Future, to name a few. It left people jobless, plans destroyed, and indescribable heartbreak for both its loyalists. And who wouldn’t be heartbroken, if you didn’t even get the chance to drop by for a last look?

Fortunately, some were able to slowly shift to digital. When Maginhawa’s gem Cinema Centenario said goodbye, it  connected to Cabin Fever Hit Cinephiles through MOOV, which streams Filipino films. Nothing may beat the tangible place, but here’s to hoping (and helping) these businesses relocate, even virtually.

Let’s see: “Clueless,” “Avatar,” “Winx Club.” Hard pass. Our only request? Please, please stop making them gritty. And maybe don’t rely on nostalgia that much? It’s not as if we don’t have storytellers with fresh ideas.)

The death of George Floyd sparked #BlackLivesMatter protests not only in the US, but also globally, with people  denouncing police brutality as being connected to deeply ingrained systemic racism. Floyd was killed by police officer Derek Chauvin in Minneapolis last May. Chauvin was charged with murder and manslaughter. Floyd was the 105th Black American killed by the police in 2020. (See the full list here and here).

In the same year, another African-American named Breonna Taylor was shot and killed by Louisville police. Andres Guardado, an 18-year-old Salvadoran-American, was also shot by a Los Angeles County sheriff’s deputies. The list goes on, and the fight for racial justice continues. According to The Washington Post’s documentation, for every 1 million Black Americans, 31 are killed by the police.

In the Philippines, cops have been the focus of various news headlines, often for disappointing reasons. Just days before the end of 2020, 52-year-old Sonya Gregorio and her 25-year-old son Frank Gregorio were shot dead by Police Senior Master Sergeant Jonel Nuezca after a heated confrontation in Paniqui, Tarlac. Based on World Population Review’s data, the Philippines ranks third with 3,451 cases among countries with the most police killings in 2020.

7. Sudden death of young celebrities—and pretty cruel at that

Kobe Bryant and his daughter Gigi passing away in a helicopter crash. Naya Rivera drowning in Lake Piru in Ventura County, California. Chadwick Boseman succumbing to cancer. Lloyd Cadena testing positive for  COVID-19 and dying of a heart attack. The list is long—and we’re still in disbelief.

8. Red-tagging and arrest of activists

The cases of Piston 6, Pride 20, Randy Echanis, 7 Cebuano activists against Terror Bill, Reina Mae Nasino, Human Rights Day 7 and more make us ask: What happened to democracy? Does our justice system even listen to the people?

And don’t even get us started with red-tagging people, including students, who just want to voice their opinions.

9. The Arctic Ocean having chlamydia

There hasn’t been a solid answer to this discovery, but researchers have some theories. Chlamydia probably plays a bigger role in marine ecosystems than we think. Or, it might explain how the bacteria infected the human race in the first place.

Who knew our collective dread would live vicariously through a large flightless bird? On Aug. 4, a runaway ostrich was caught in a private Quezon City subdivision. It pretty much validated everyone’s theory: Someone’s playing Jumanji (or maybe Animal Crossing… too much?)

But no, this isn’t a comedy. Less than a week after, that same ostrich reportedly died due to stress. It was handed over by Jonathan Cruz, the alleged owner, to the Department of Environment and Natural Resources. That got us thinking: Can ostriches be kept as pets? Yes, but owners should have a Certificate of Wildlife Registration from DENR (and maybe a sense of responsibility).

This one’s a pretty thick book, so here are major points:

12. Grammy snubs (should we even be surprised?)

Are we pretending this doesn’t happen every time? Yes. Are we still going to bring it up? Yes. If The Weeknd’s “After Hours,” BTS’ “Be” and Rina Sawayama’s “Sawayama,” aren’t in the honor roll then WYD, Grammys?

13. The continuous disparity between rich and poor

The rain scene from “Parasite” doesn’t get repeatedly shared this year for nothing. Quarantine pretty much highlighted the class divide more—even in the most mundane act of buying cake.

On Mother’s Day, customers flocked to bake shops around Manila for the confection to be given to celebrants.  On the same day—at the other end of the spectrum—people flocked to the Bagong Pag-asa Elementary School for the promised  financial assistance as part of Department of Social Welfare and Development’s (DSWD) social amelioration program. Given that it was the deadline and space was limited, physical distancing wasn’t possible. At the height of the lockdown, the rich kept demonizing  ordinary citizens who violate health protocols. Haven’t they realized that most of these poor citizens have no choice but to go out and work?

Facebook dupes, Wattpad hacking, productive websites suddenly self-destructing in the middle of your 9 to 5? That’s a whole ass mood right there.

15. ABS-CBN’s shutdown… and our questions during the hearing

See, about 11,000 employees got retrenched. According to the Bureau of Internal Revenue (BIR), the Securities and Exchange Commission (SEC) and the National Telecommunications Commission (NTC),  the network didn’t even violate any law. But the government says we should all move on.

It’s no secret that students suffered tenfold this year (unless you’re DepEd, which laughs at suicide cases among students). Never-ending hashtags embodying appeals from students keep dominating the interwebs, which isn’t surprising in a school year that lacks inclusive planning and empathy.

We have 11 words after these typhoons wreaked havoc in our country: Stop using the Filipino resilience card. Demand accountability. Declare a climate emergency.

18. (The audacity of the) PhilHealth corruption issue

Filed under: Top 10 Anime Betrayals. Former anti-fraud officer Thorrsson Montes Keith claimed that a “mafia” existed in PhilHealth. Also according to him, about P15 billion were stolen from the agency via fraudulent schemes among some of its officials and partner medical institutions.

Health secretary Francisco Duque III  dubbed “godfather” of the corruption, immediately rejected the claim. “The whole institution of PhilHealth is composed of decent and competent public servants. The rotten eggs are not the be all of the institution. I thank the President and Secretary of Justice in pursuing a clean-up,” he said. The President recently rejected the call for Duque’s suspension amid allegations from several senators  endorsing his resignation because of failing to properly handle the pandemic.

It would improve our mental health, government functionaries said. It’s not a waste of taxpayers’ money, they said. IDK anymore, but let me be musician Chall for a while and stare at the glorious white sand for five minutes.

Pandemic anxiety made us sleepy, forgetful and angry, Washington Post reports. This year has been Too Much—and this list doesn’t even count every single thing.

SHAREWe’re not exaggerating when we say that the sneaker game has come a...

SHAREReserve your TV marathon for the weekend. Go out with your friends on...