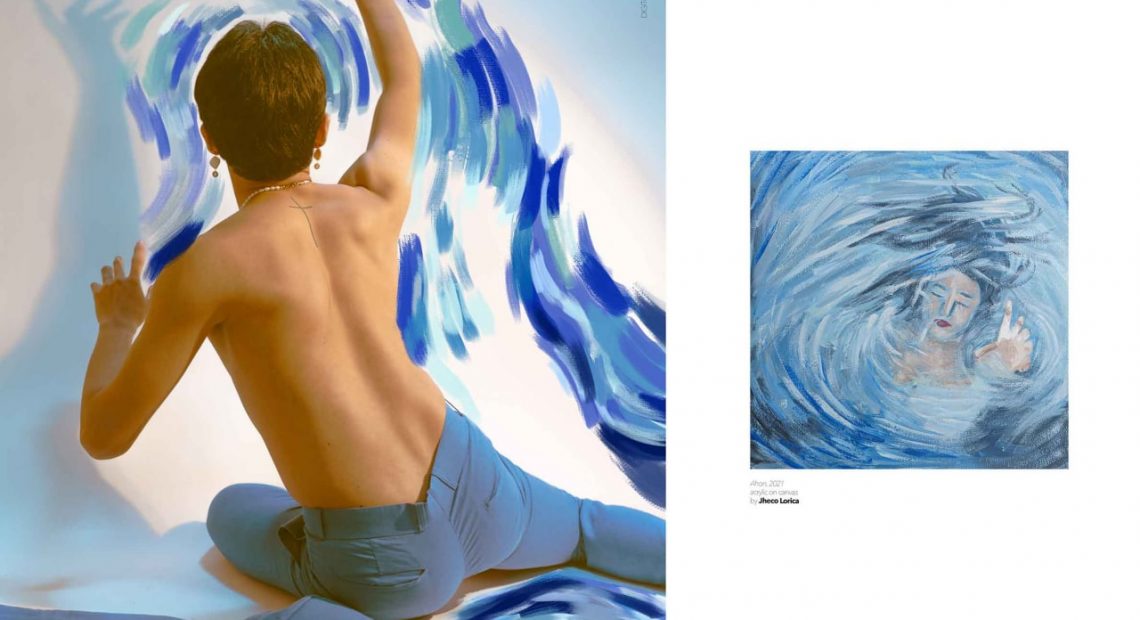 During the Renaissance, bodies were protagonists in artworks. In fact, there was a symbiotic relationship between artists and physicians. Renaissance artists were fixated on learning more about the human body and its anatomy, as it could help them paint and sculpt their pieces more flexibly. In return, physicians hired artists to illustrate for anatomy textbooks.

And while artists like Donatello and Michaelangelo heavily focused on bodies in their creations mainly for spiritual meaning,  the period also marked the time for Renaissance artists to connect with their surroundings better.

If bodies were important in making sense of the world and its changes centuries ago, it also plays the same role for one virtual exhibit this 2021—even if we’re in an entirely different situation. 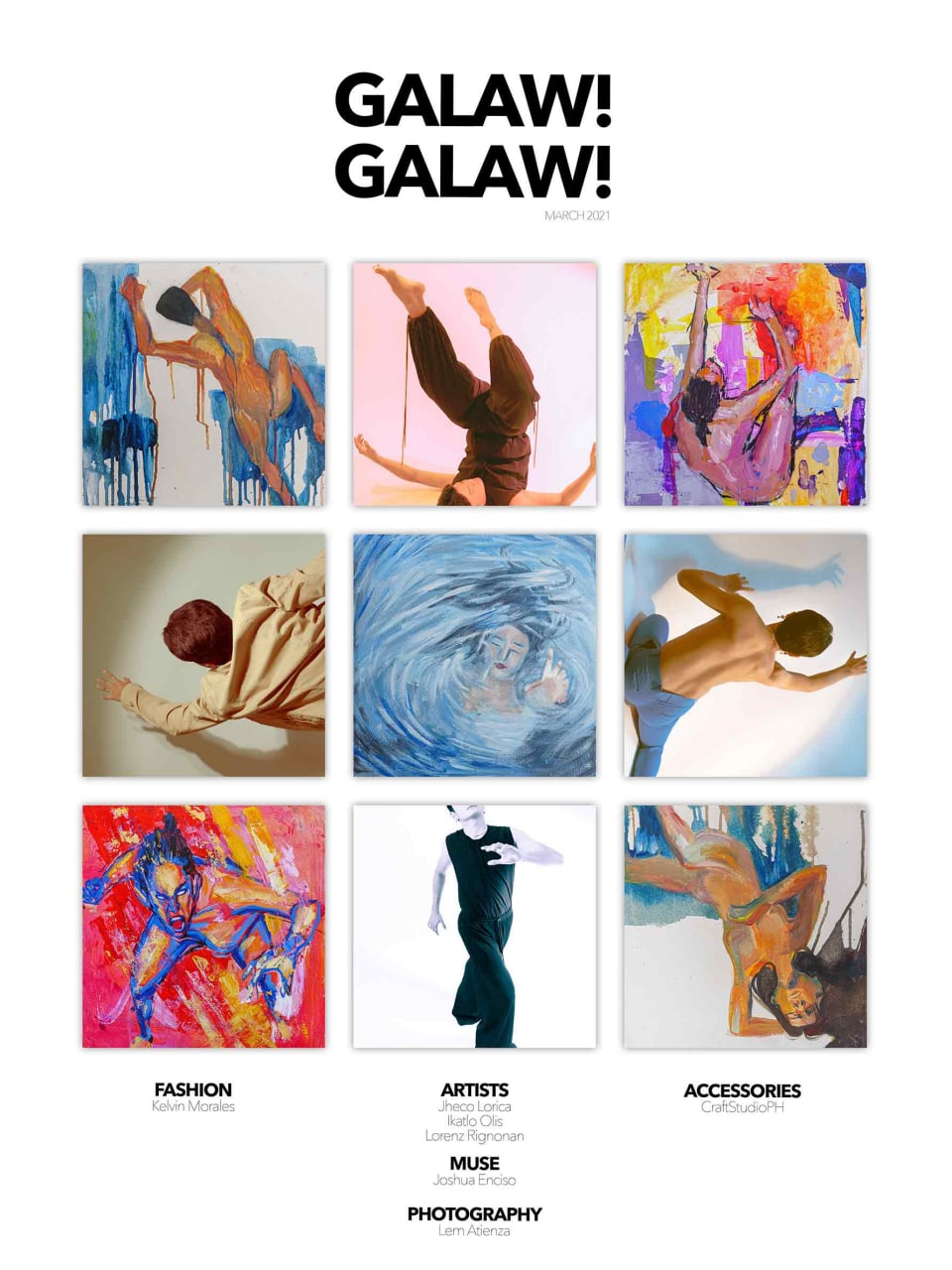 Released on March 15 a.k.a. the Manila lockdown anniversary, “Galaw! Galaw!” is a virtual exhibit that follows a moving body—bending, falling, reaching, signifying full control—alongside emotionally charged paintings. But at the same time, this gallery hones us into the truth: the longing to escape from the walls that make it impossible for us to walk beyond our spot.

The project also serves as a “commentary on the government’s slow-paced efforts in alleviating the effects of the health crisis in the country,” Lem Atienza’s page reveals. A 21-year-old photographer and digital filmmaking major at De La Salle-College of St. Benilde, Atienza initiated “Galaw! Galaw!” and took full creative control.

Together with fellow students Ikatlo Olis (fine arts, Technological University of the Philippines), Jheco Lorica (architecture, Far Eastern University) and Lorenz Rigonan (visual communication, University of the Philippines Diliman) who made the paintings, designer Kelvin Morales and CraftStudioPH’s Joshua Baldomero who completed the muse’s look, and Ballet Manila’s Joshua Enciso who personified the project’s message, “Galaw! Galaw!” serves as an arresting documentation of our repressed uproar. The longer you look at it, the louder its voice sounds.

To know more about the project, Atienza reels us in on his team’s creative process and making art that calls for change.

Hi Lem! How would you describe yourself as an artist?

I value capturing moments and evoking a feeling. The theme and concept of my works are very important to me. Content is king. My works/photos focus on my subjects’ body forms, candidness and spontaneous movements, complemented by a minimalist approach to photography and pastel treatments.

Can you walk us through the conceptualization of “Galaw! Galaw!”?

Though the whole project and concept were my brainchild, it was a collaborative effort that brought it to life. I reached out to student artists across art institutions in the metro. Ikatlo, Jheco and Lorenz played a significant role in bringing this idea of mine to what it is today.

How can we have a new beginning if we don’t move? Thus, it led us to the “Galaw! Galaw!” idea.

The conceptualization of “Galaw! Galaw!” came from my thematic statement of “having a new beginning for Filipino creatives through art and healing.” Before, it was named “Project Liwayway” and I had a different visual treatment for the project. However, when my collaborators and I finally met in person in late December 2020, we had to flesh out my thematic statement. But then a question lingered: How can we have a new beginning if we don’t move? Thus, it led us to the “Galaw! Galaw!” idea.

It was in January this year when we finalized the concept and I led the creative direction for the project. I wanted to incorporate my style in photography of having movements and body forms as subjects. We all accorded to the concept of motion, mental health and moving out of the walls, engraved with the diversity of our artistic styles.

Can you tell us more about the artists? What was it like collaborating with Jheco, Ikatlo and Lorenz?

The artists who are part of “Galaw! Galaw!” are my friends from elementary and high school. Ever since, we’ve been seeing each other’s works and progress. However, we have never gotten the chance to collaborate and produce something [together]. That’s when I reached out to them because I believe in their talents and the harmonious workflow we can do.

Working with them was extraordinary. When they were working on their canvases, I told them that I wanted our art-making sessions to be a safe space and therapeutic for all. Because when we’re in a clear headspace and there’s no pressure, we can properly express ourselves and give our very best in producing an output. 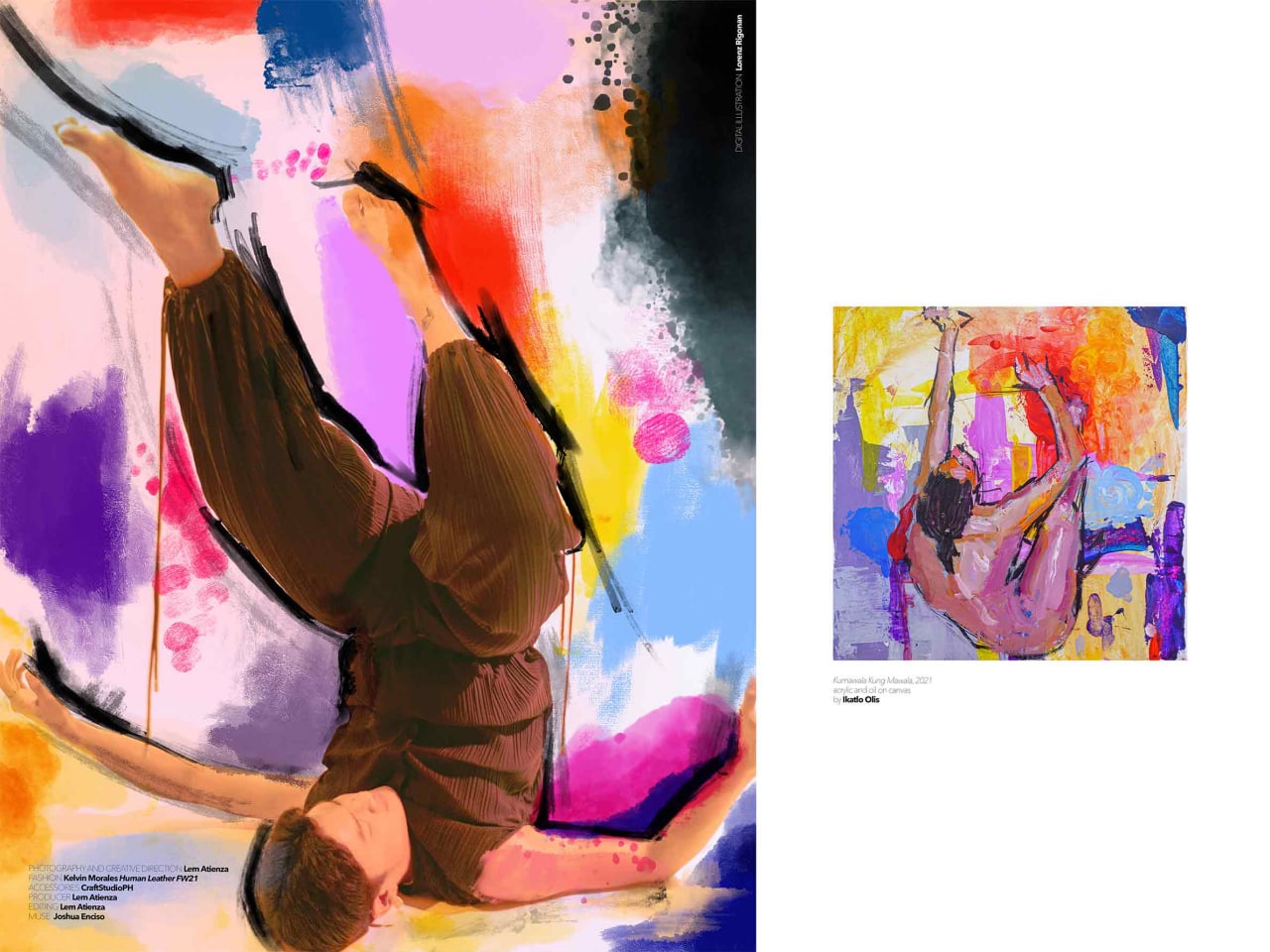 “Galaw! Galaw!” serves as a commentary on the government’s slow-paced efforts in terms of pandemic response. Can you tell us more about this call to action? What was your current headspace like while producing and shooting the project?

“Galaw! Galaw!” to move out of your comfort zone (which I did in this project—reaching out to other creatives).

“Galaw! Galaw!” for Filipino artists to not box ourselves and keep moving forward, one step at a time, together with art and healing.

And most especially, “Galaw! Galaw! ” to our government officials to step up and double their efforts in alleviating the health crisis’ effects and to acquire more vaccine supply.

While producing and shooting “Galaw! Galaw!,” I was in a good headspace and I had full control of the flow. However, during the middle of the process, I was a little puzzled and doubtful. There were a lot of schedules to be synchronized and revisions to be made. Also, school requirements were starting to pile up. It became a hazy moment for me because I couldn’t see the clarity of the project just yet. But those doubts turned to relief, clarity and confidence that we’re going to put out a body of work we’re all proud of. 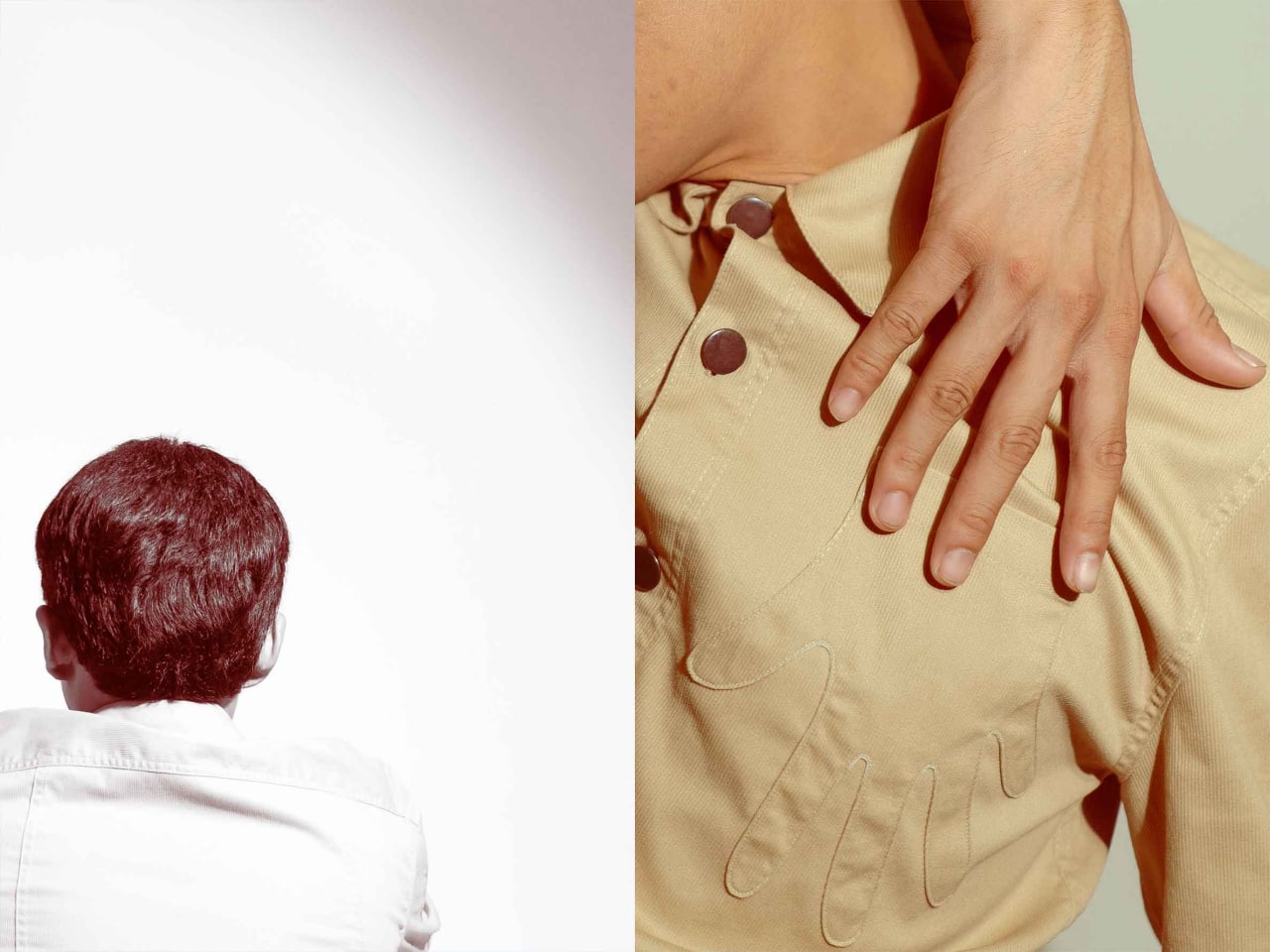 Aside from shooting, editing and producing, you also handled the creative direction. Perhaps what other artists worry about right now when creating is how their output’s intention might be misconstrued as romanticizing the situation. Did you feel the same way?

My collaborators and I didn’t experience the same worry in releasing “Galaw! Galaw!” because from the start, our purpose and intentions were very clear. We’re not doing this for clout. We did “Galaw! Galaw!” to express ourselves and to call for action about the efforts being put into the pandemic response.

I remember during dinnertime after our art-making session, we had this conversation about artists who tend to romanticize societal issues for clout-making “political art” and for the social media buzz. Some people really take advantage of situations and make them about themselves, rather that making art for the benefit of others. And, we’ve also discussed how politics and art are inseparable because everything we do is political or involves thereof.

We, as artists, should have a discerning eye and not be pretentious when we create because we hold a social responsibility. Our art is at its best if it’s well thought out and if it’s as authentic as it can be, not just for fame or attention.

More than ever, the art we produce as artists now strongly holds a social responsibility.

What’s your favorite thing about working with Kelvin and Joshua for the styling?

My favorite thing about shooting with Kelvin Morales’s pieces is that his designs are really extraordinary and evocative. His “Human Leather” and “Penetration” collections suited very well for the project. I respect and believe in his contemporary art process and his distinctive, thrilling design translations.

Working with CraftStudioPH was magical because the pieces were handmade and personalized. Joshua Baldomero, the owner of the shop, put his heart into every piece he created, and that’s what made the accessories enchanting. It’s very rare to see a local accessory shop owned by a student artist who’s very hands-on and, at the same time, an academic achiever at university. 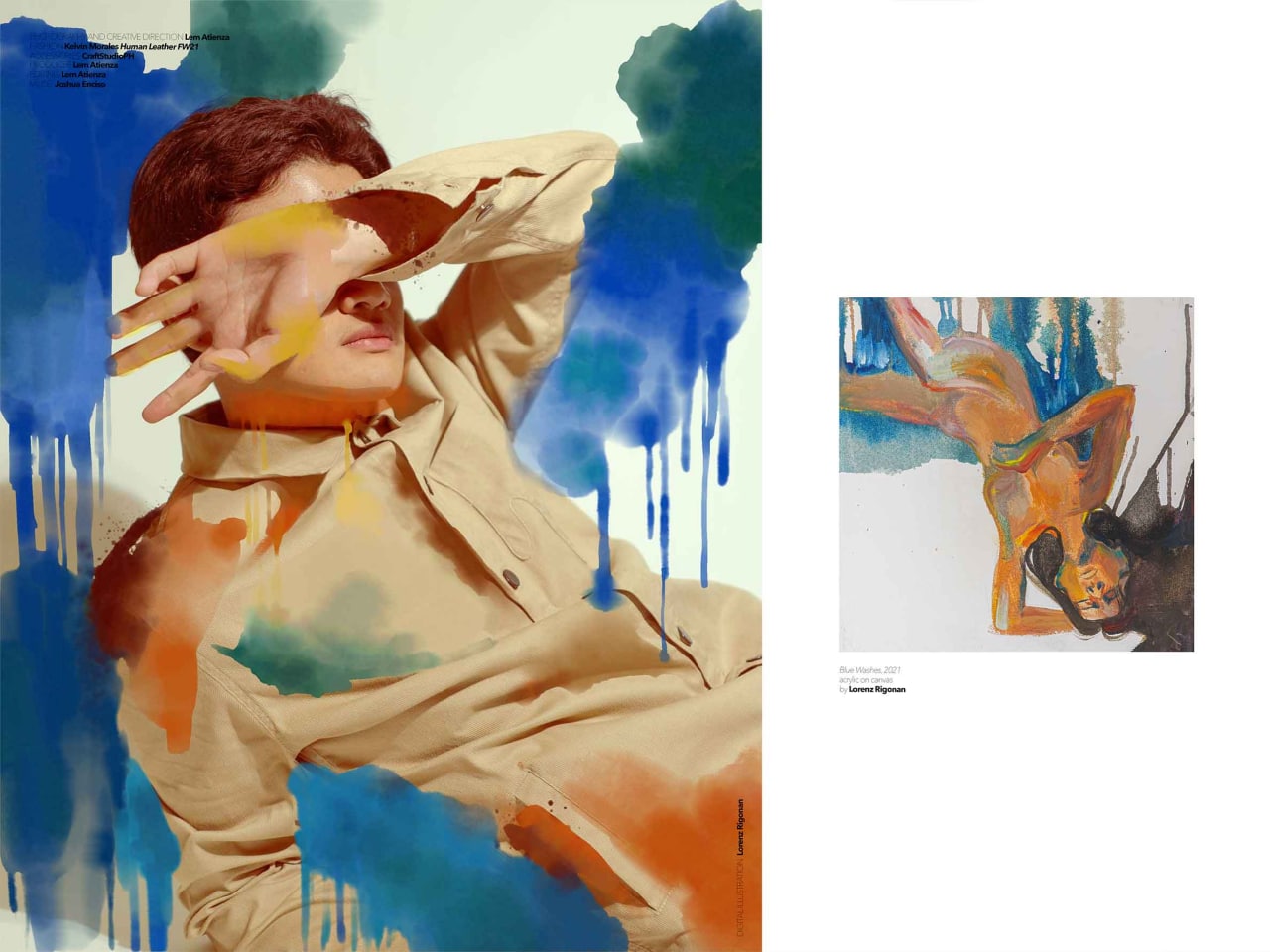 Was the project cathartic for you and your team?

The project was indeed cathartic and therapeutic for the whole team. When we had our art-making sessions and photoshoots, we had the time to catch up and go back to art after being stagnant for so long. That feeling of being physically “in the zone” with other creatives is very priceless. We had the opportunity to do art and, at the same time, share and hear each other’s collective experiences during this lockdown.

What do you think is the biggest responsibility of artists during this time?

For me, the biggest challenge and responsibility of artists in this pandemic is to create art that either answers the call of our times or sparks an awakening. More than ever, the art we produce as artists now strongly holds a social responsibility. [With] the way art influences our society, we should distinguish making purposeful art and making content for clout.

Check out the whole exhibit here.

The next streetwear trend? Rugs. Just ask this 14-year-old artist

SHAREBeyond the Monstera deliciosa and the succulents we all know and love, I...

The video is pretty simple: it features Atenean Richelle Amponin singing along to...