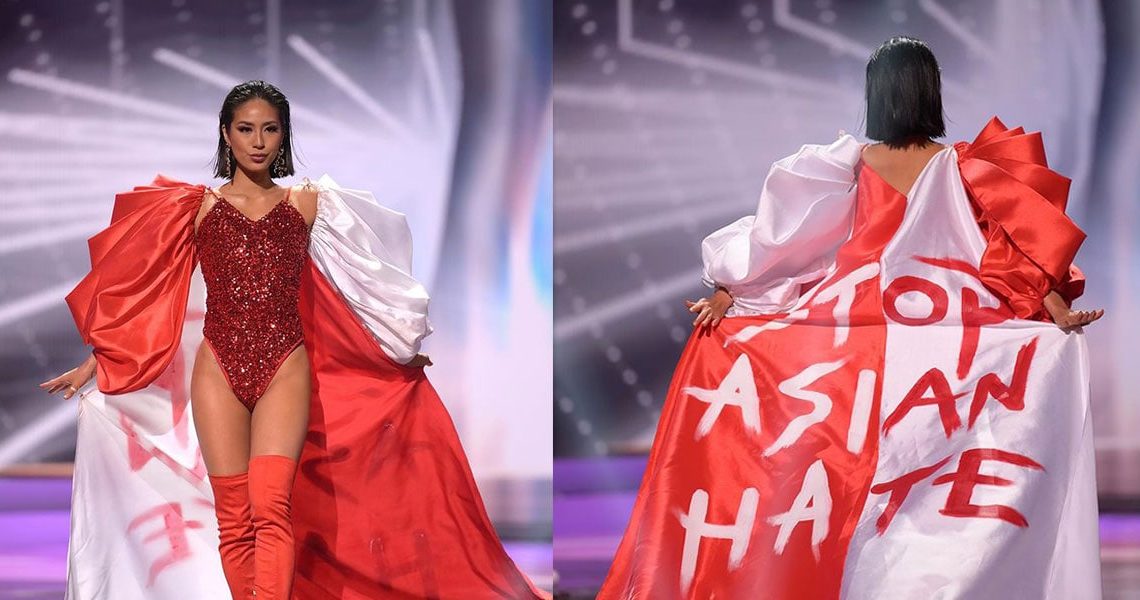 Today, May 14, everyone’s jotting down their faves from the Miss Universe national costume runway. But there seems to be one that overlaps in many lists.

“So many impactful pieces from this year’s delegates!” said the Miss Universe organization on Twitter, featuring a clip of Singapore’s candidate Bernadette Belle Ong’s turn onstage, repping her people with a sparkly look that resembles her country’s flag. But not only was her walk a headturner—it was also a statement.

As Ong turned around, she revealed the message on her cape: “Stop Asian Hate,” a rallying cry in the protests amid recent attacks against  Asians and Asian Americans in the United States. Many have commended Ong’s powerful use of her pageant platform, and she thanks her team for making this possible, including her Filipino designer.“Can you believe that this was made only in 2 days?” Ong said on Instagram. She reached out to Arwin Meriales, a 21-year-old fashion designer, who later on tapped another Filipino artist named Paulo Espinosa to paint on the cape. “When [Arwin] offered to get [Paulo] to hand paint something at the back I knew straight away that it had to be about the movement revolving racial spite and prejudice!” said Ong.

“When Bernadette asked me to make her national costume, I have to be honest, I thought it’s not going to work. I only had 2 days to make it. Considering that I’m still studying, I thought it’s not going to work so I was hesitant to accept it,” Meriales confessed on Facebook. “What made me say Yes? It’s not just a national costume. It’s a ‘STATEMENT and PROTEST’ to stop [A]sian hate. Who wouldn’t want to be a part of such cause.”

Ong also shared that Arwin was busy with exams when he whipped up this costume—along with two other outfits for the pageant. IDK about you, but that’s the energy I aspire to have.

SHAREWhat do you get when you cross the Taika Waititi vision with the...

Remember back then when the first thing you opened on your web browser...