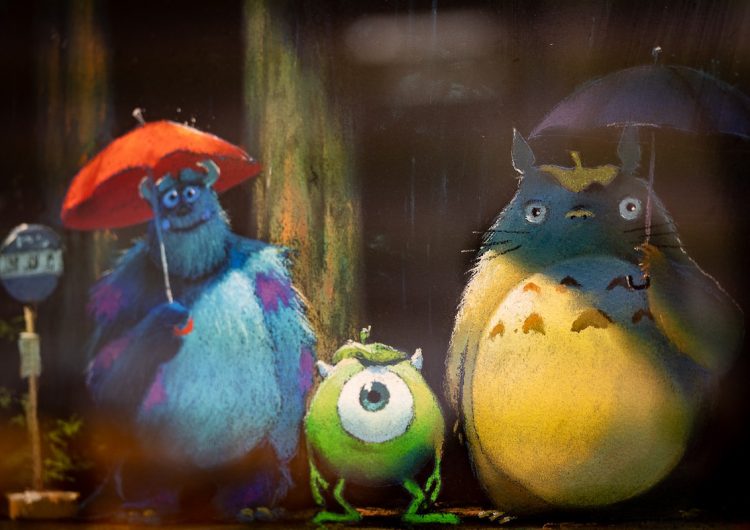 We’ve long thought about it, dreamed about it, and maybe even ditched the idea to save our supply of tears. Now, it could become a reality, as Studio Ghibli might’ve just teased a possible collab with Pixar.

Recently, Film Twitter went haywire after Studio Ghibli tweeted an artwork featuring friendly gray giant Totoro under an umbrella, waiting at a stop for the multi-legged cat bus. (You know, that photo.) But instead of sisters Mei and Satsuki in tow, Totoro has two new pals in the artwork—and they’re none other than Mike and Sulley from Pixar’s “Monsters, Inc.”

To absolutely no one’s surprise, fans ate it up, thinking that the tweet might possibly hint at an upcoming collab between the animation giants. It isn’t that far-fetched of an idea, given the history between the two.

In fact, this isn’t the first time Totoro was spotted getting close with fictional folks from the Pixar realm. Back in 2010, the titular character of “My Neighbor Totoro” had a cameo in “Toy Story 3” as one of Bonnie’s plush dolls. The then-Pixar head John Lasseter had said that it felt like a “very appropriate homage” to Ghibli co-founder and long-time friend Hayao Miyazaki, and it showed how much the Japanese studio meant to the Pixar crew.

The Totoro x “Monsters, Inc.” artwork isn’t something new, either. According to SoraNews24, the painting was displayed at one of Tokyo’s Studio Ghibli offices, as seen in an NHK documentary back in December 2019. So, is the tweet just a cheeky throwback? A strategic teaser? A random thing posted by its social media manager that threw us in a frenzy, while they diabolically laughed behind the screen? We don’t know yet, but our hopes are still up, anyway.

Elsewhere in the Ghibli ’verse, we finally know the secret to their mouthwatering food. (At least we can eat that while waiting for a confirmation.)

Read more:
This Cebu artist turned Studio Ghibli into Filipino stories
Meet Studio Ghibli characters hanging out at UP Diliman, thanks to this artist
Netflix is finally making a film about Philippine mythology

SHARE“Their time is up.” Four words, and yet Oprah Winfrey delivered it with...

SHAREGood news, demigods! Rick Riordan has finally come to his senses and went...