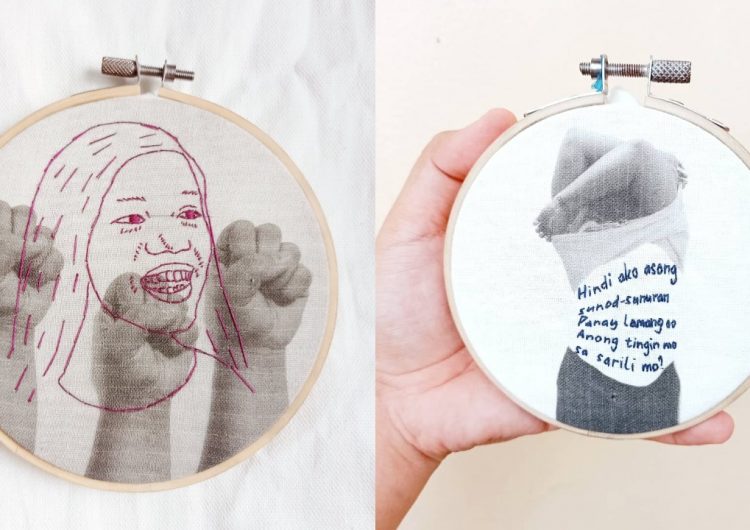 How do you speak against societal oppression? Most art activists would have the common arsenal on hand: a can of spray paint, a brush, a handmade zine, or for the more digitally-inclined, a tablet booted with Photoshop. But for one artist, the call against widespread injustices all starts with these: a thread, a needle, a hoop, and pieces of fabric that leave space for jarring messages.

Twenty-seven-year-old artist Ja Turla’s portfolio consists of exactly that—eye-opening statements that reflect the real state of the nation, now sewn into cloth. Raised in Northern Samar but based in Cavite, Ja juggles several art forms as a multimedia artist, but the art of hand embroidery became an outlet as an aftermath of a digitally dependent pandemic. 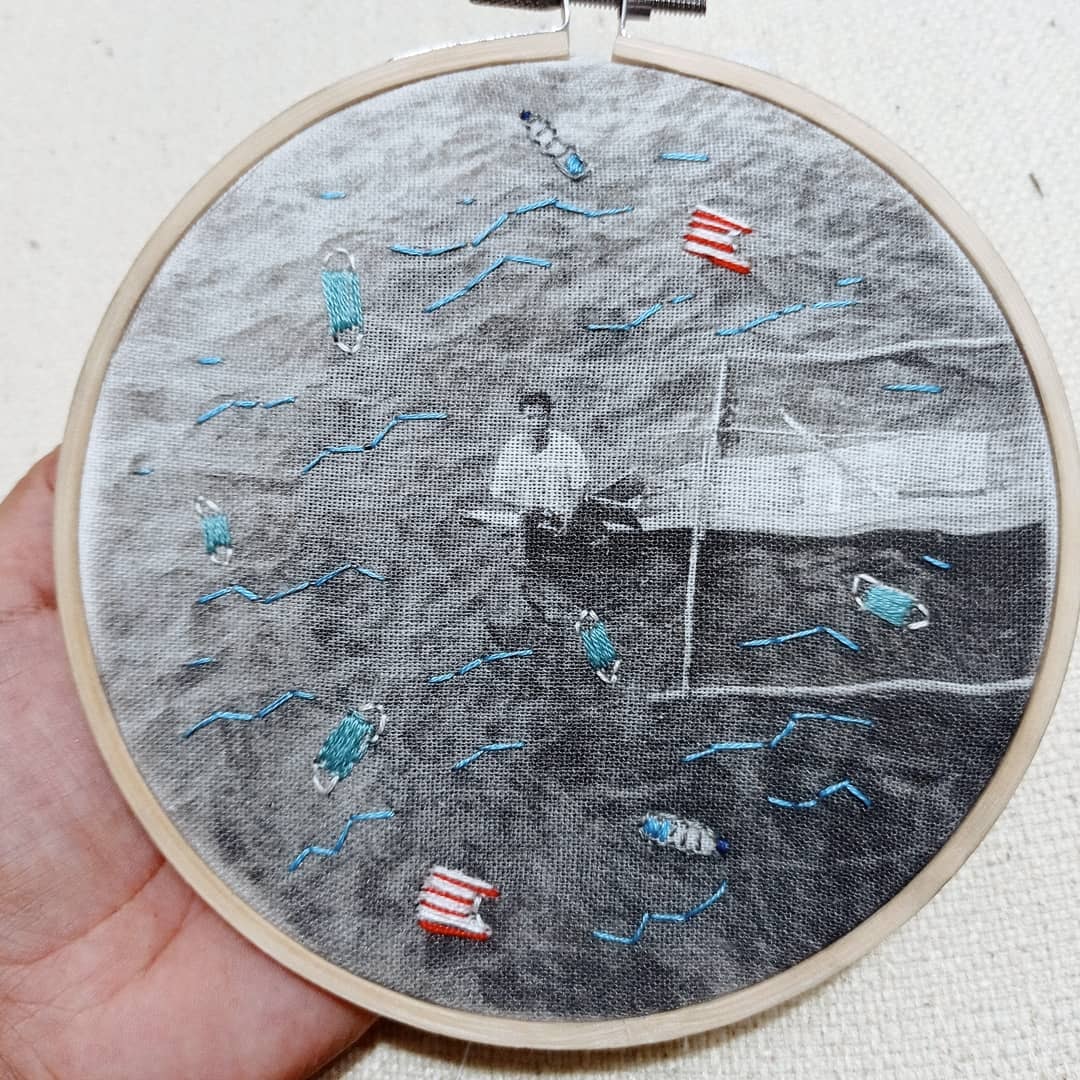 “The digital world fully consumed me, so I had to seek another form of visual expression where I can disconnect,” Ja tells us. She recounts a time last year where she bought a beginner’s embroidery kit online, and from then on, stitching seemed second nature. Her interest resulted in Instagram pages dedicated to the art, including Dagum (the Waray word for “needle”), Ligalig (a series on mental health), and Emo.broidery, where she houses her outcries on topics like ocean pollution, attacks on farmers, voters’ rights and LGBTQ+ issues.

In spite of her many diverse takes on social issues, Ja says her recent passion for this had more of a “gradual discovery.” After graduating from the University of the Philippines Baguio, she worked as an editorial production assistant at the Philippine Daily Inquirer, where she was witness to the ins and outs of news clips and reports, and as a result, was exposed to a harsh world that most wouldn’t be privy to.

Fast forward to the present, it’s a subject that’s almost synonymous with her work. For today’s Seen on Scout, we talk to Ja about embroidery as protest, her most challenging work, and the fear that plagues any art activist today.

Protest art can be expressed in a number of ways and it’s constantly evolving—but to most, embroidery is a unique choice, since it’s almost a “meek” hobby that wouldn’t normally be associated with the loudness of activism. Why is this your medium of choice?

At first, I never intended to use embroidery to express my voice and speak up. But I realized it’s a perfect medium because I see activism as an act that takes a lot of time, thought, effort, and courage, and that’s also how I see embroidery. One stitch can ruin an entire piece and its message, so giving it careful thought is necessary. 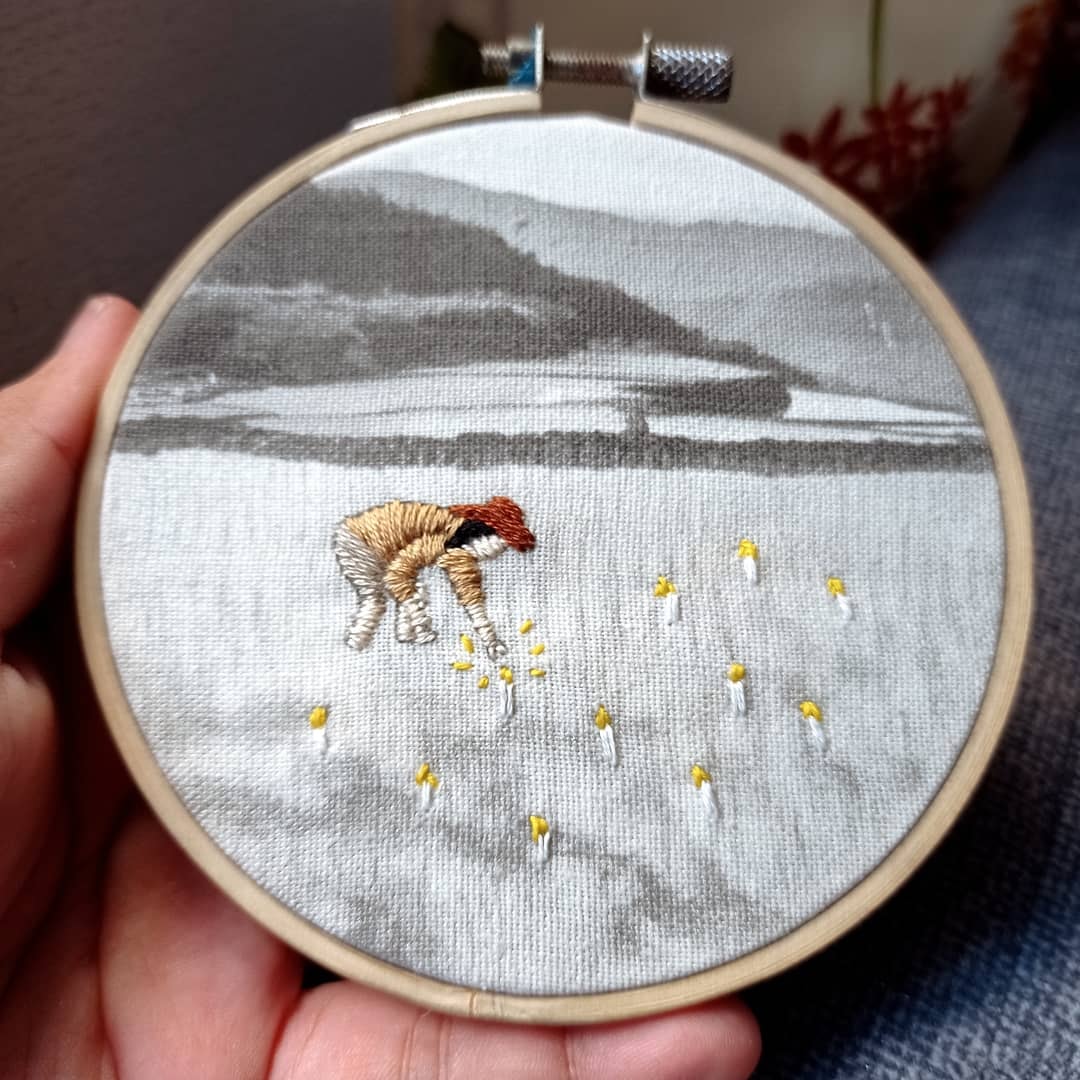 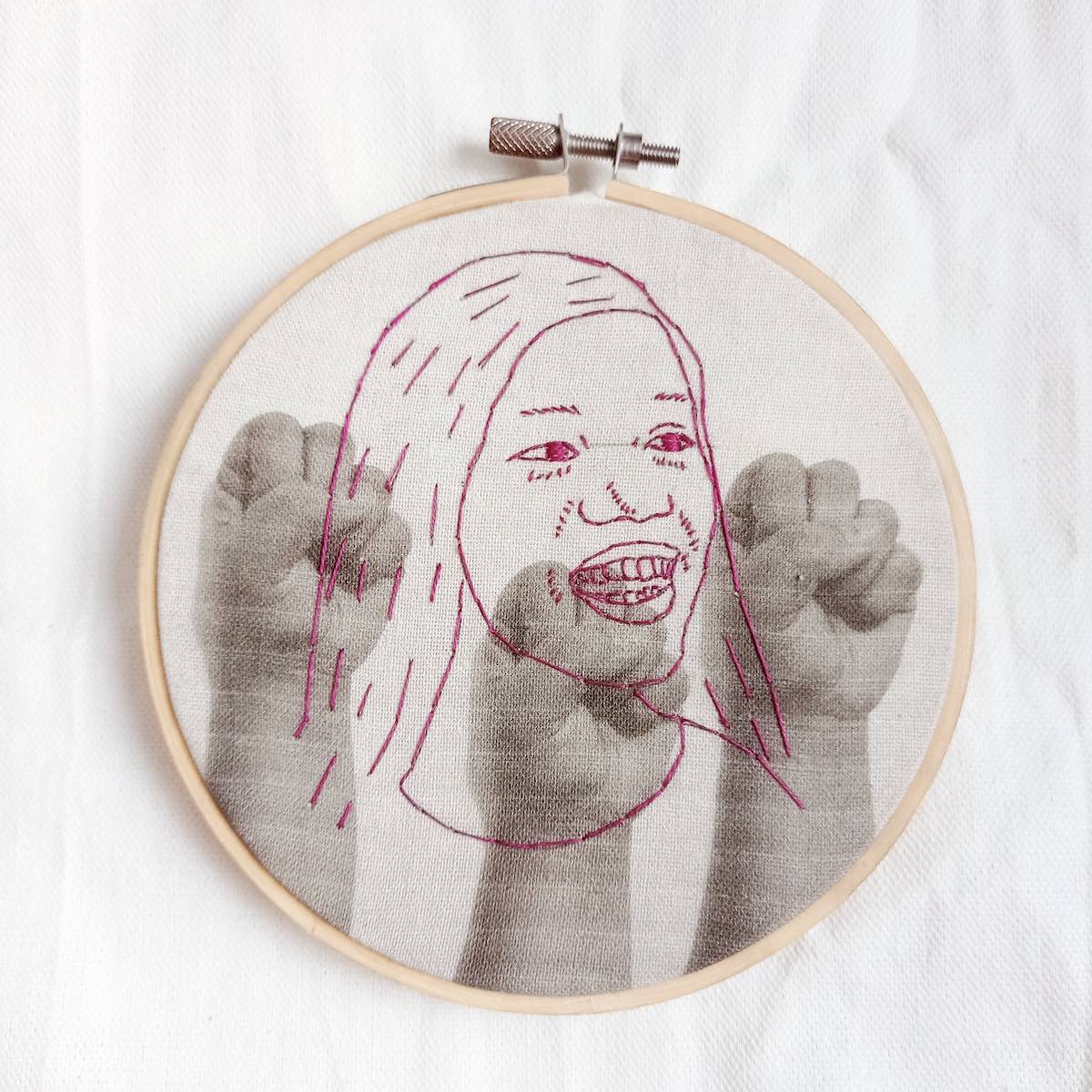 You’ve tackled several issues in your works. How do you conceptualize each of them? Can you walk us through your creative process?

My creative process usually starts with an existing message or social issue that many people are involved or affected with. I then think of how I can translate it into an art form, specifically an embroidered piece. Conceptualization takes as much time as transferring it into the fabric and I really try my best to come up with innovative concepts, if not original, every time. 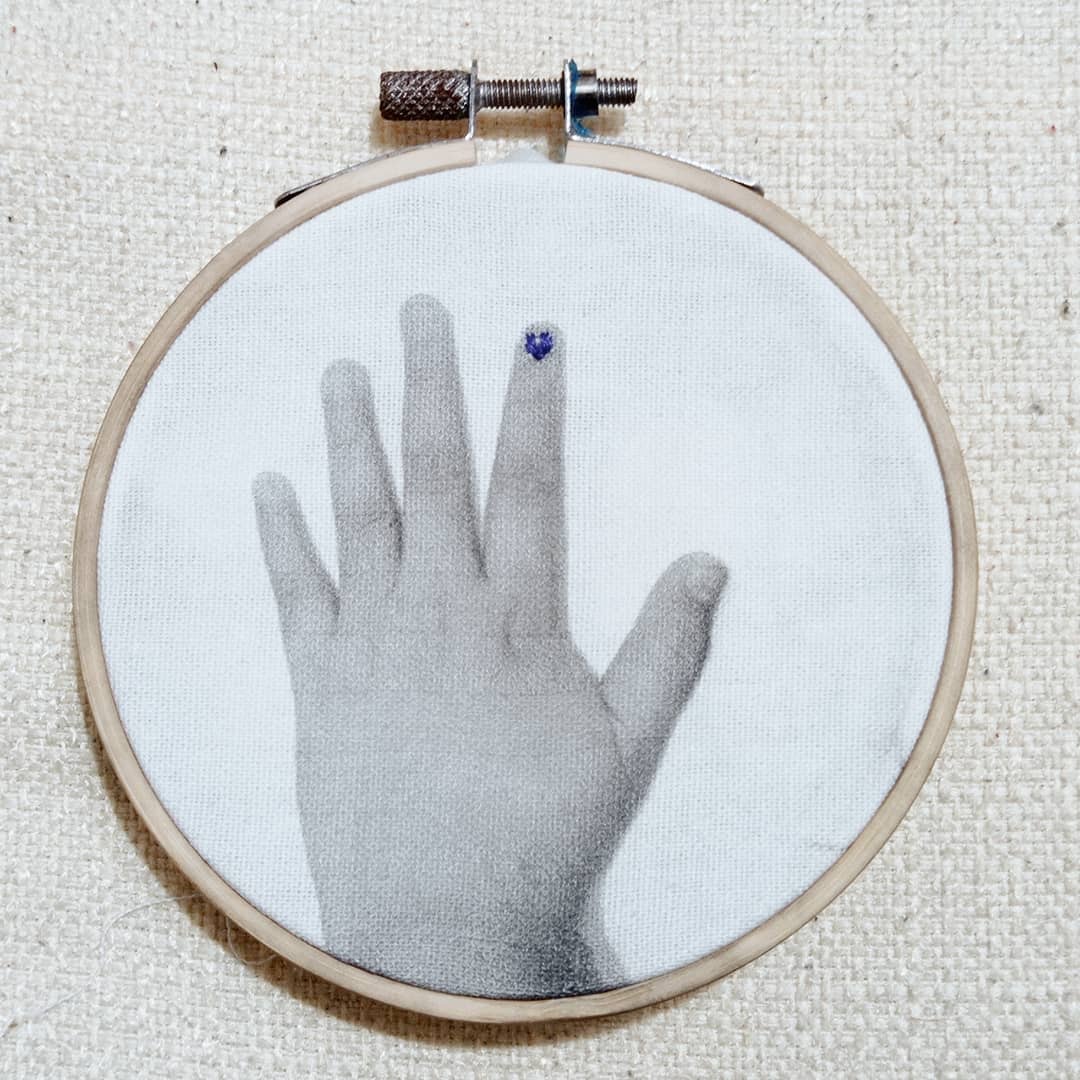 Tell us about the most challenging piece you’ve created.

It’s the piece that I created to mark the first year of nationwide lockdown in the Philippines called “12,837.” That’s the total number of deaths in one year due to COVID-19. It contains 3D embroidered elements resembling the casualties of the virus wrapped in white cloth. Besides the “bodies” is the title in red thread.

At first glance, it’s a very clean and minimalist piece. What made it challenging was how to make it impactful with a story worth telling, so I thought of making it a performance piece. I took a video and recorded the process. I took out a pair of scissors and opened the “bodies.” I pulled out what’s inside—excess, tangled threads in different, vibrant colors. The stories are inside the bodies: 12,837 different stories stitched during their lifetime. 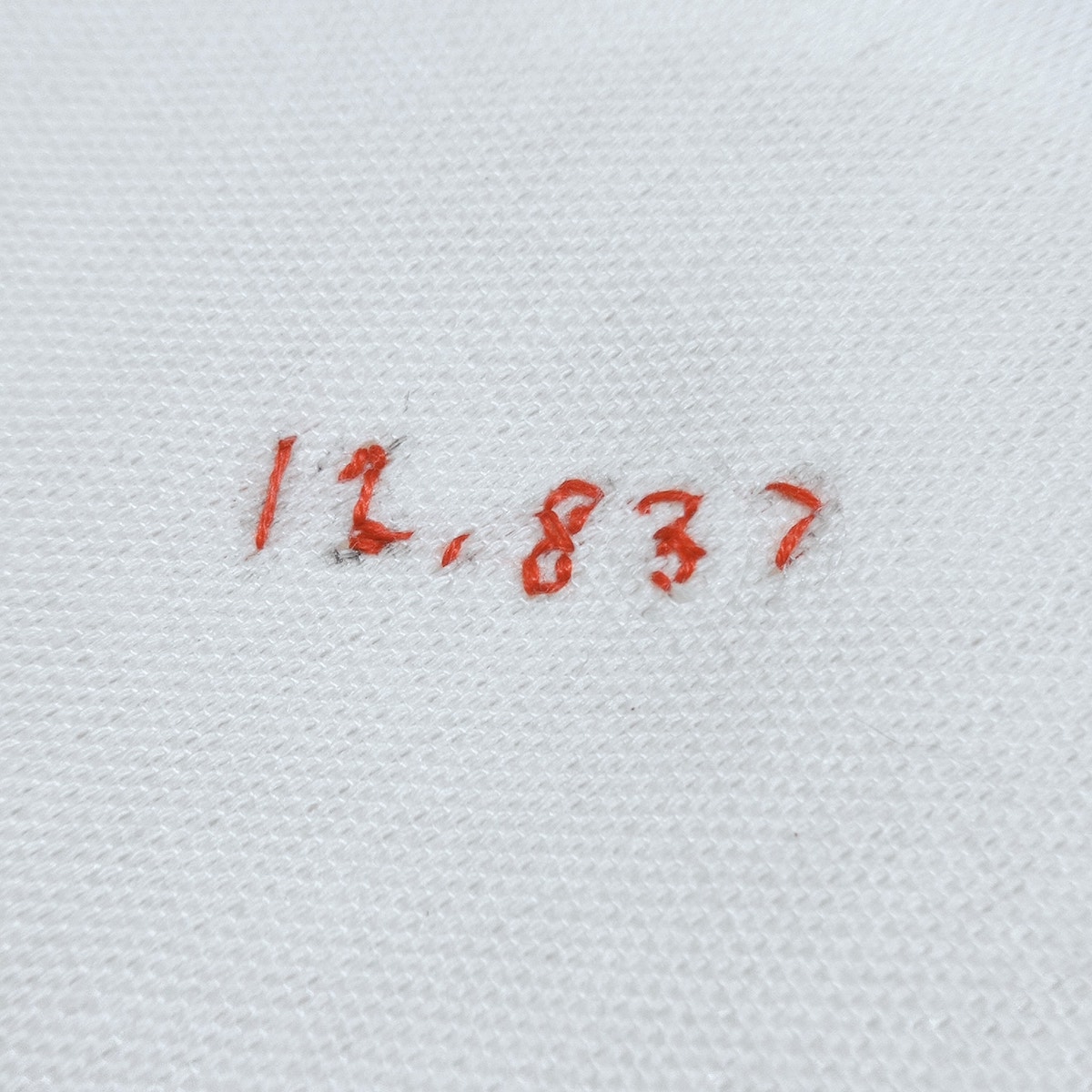 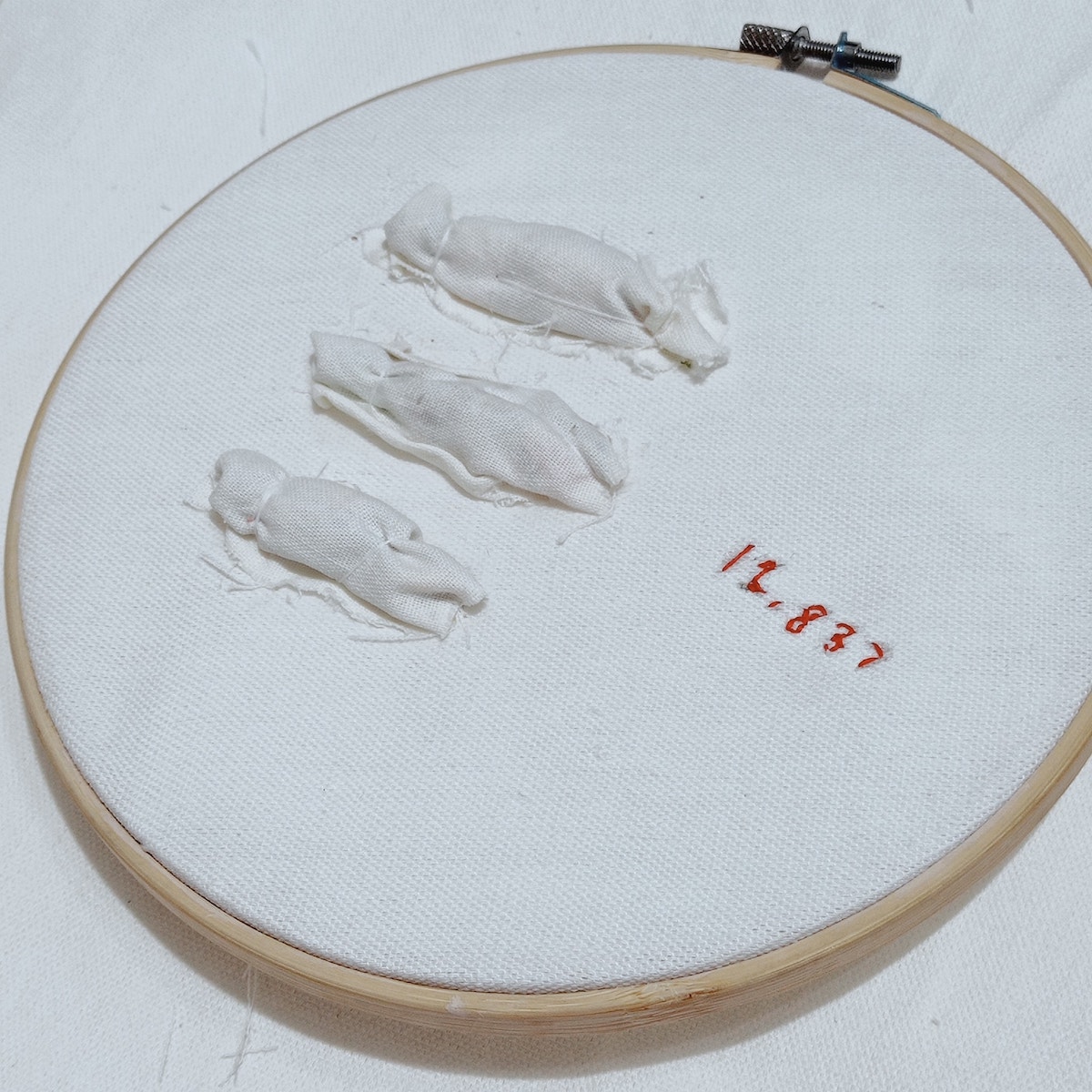 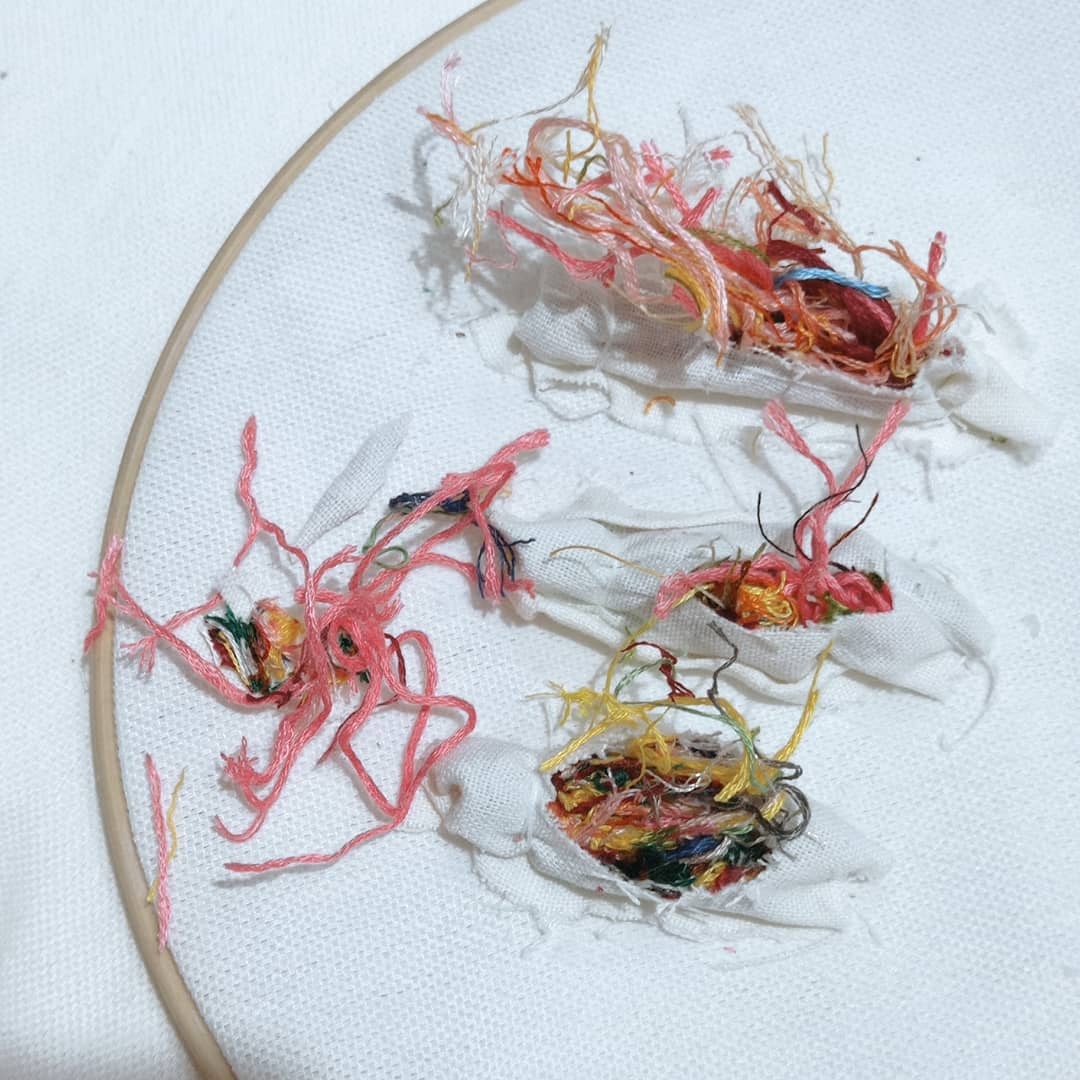 Creating art that speaks about social injustices is in itself challenging for some, especially in a time where young people are at risk of getting red-tagged. What motivates you to create your works? Do you have any advice for young artists who feel that dilemma?

My motivation comes from the people who already raised their voices and equally from those who didn’t. Seeing people being actively involved in the fight against social injustices makes me feel that I can do it, too, and that they are there to back me up when I feel unsafe. In addition, seeing people who don’t speak up because of misinformation, or just because they’re being neutral or not affected at all makes me feel the need to speak up even more. I want my art to become pieces of information to educate people and raise awareness.

I see activism as an act that takes a lot of time, thought, effort, and courage, and that’s also how I see embroidery. One stitch can ruin an entire piece and its message, so giving it careful thought is necessary.

All I can say to young artists who face that dilemma is that it really takes time to muster the courage to speak up and it’s natural to feel fear. And it’s their choice to fight or flee. But one thing I’m sure of, it’s a life worth living if you have something to fight for. 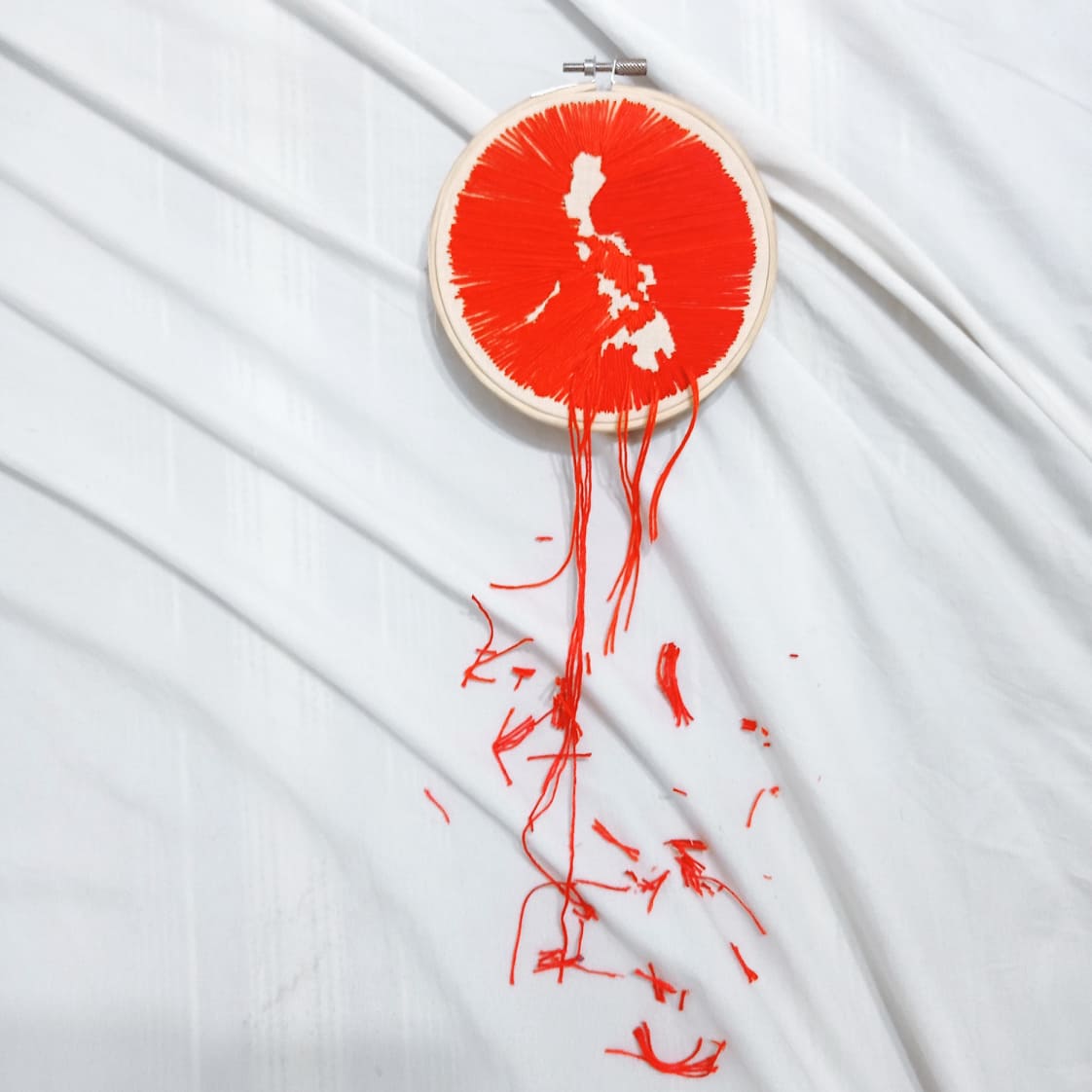 What do you hope viewers would take away after seeing your art?

There are problems in this country, and we should rightly acknowledge and address them—even if we’re not directly affected.

SHAREBy Celene Sakurako Halloween is still seven days away, but if there’s one...