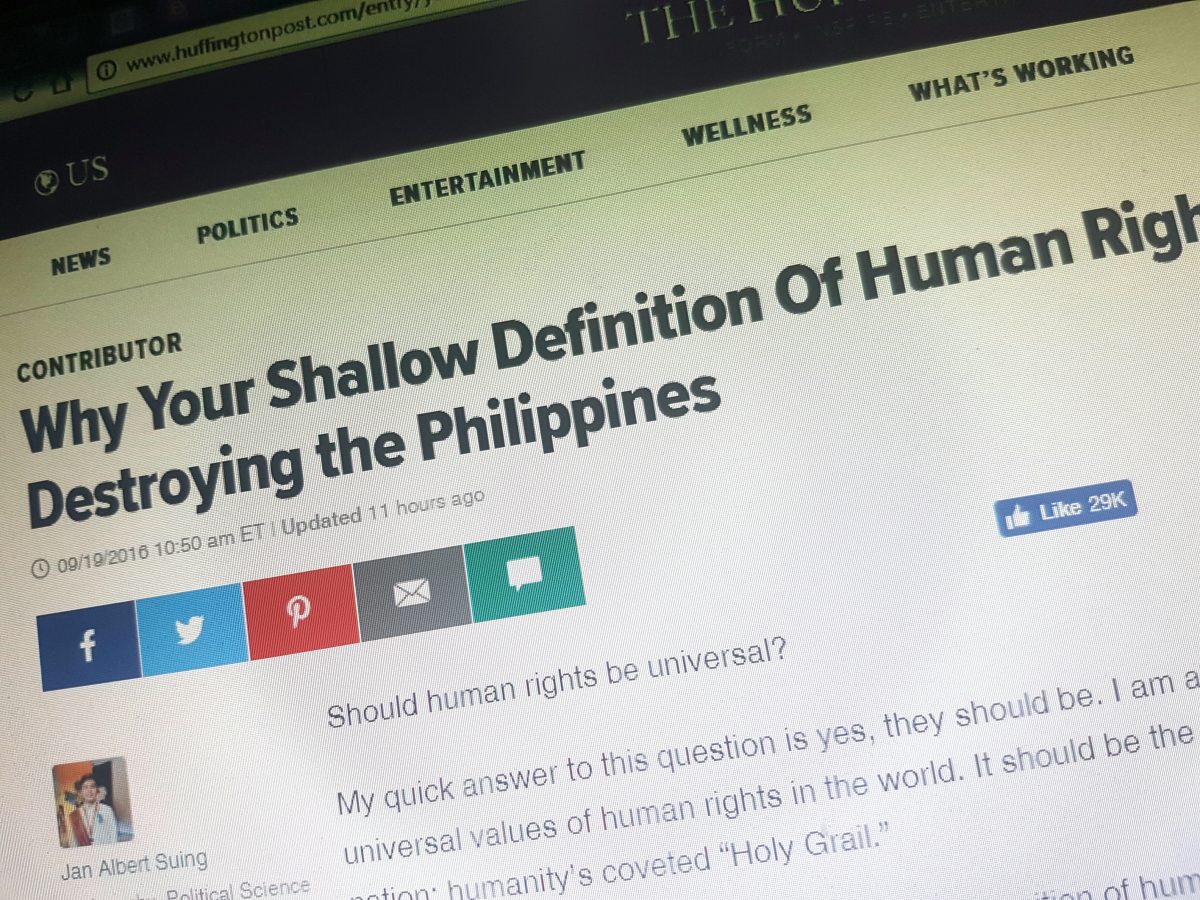 The current political climate of the country is pretty much an invitation to open season for thinkpieces. In fact, one reason why we don’t run them so much is that we’re aware we’re only just going to add to the glut of toxic word vomit you read on your social media feeds every day. Some of them are all right, and we can list down some really sober, well-thought out discourses from supporters of the administration, but of course, there are those who are plain misguided.

UP graduate Jan Albert Suing wrote an article for the popular news site, and its headline is quite the doozy: “Why Your Shallow Definition of Human Rights Is Destroying The Philippines.” Harsh. In it, he claims that if we can make economic gains under an authoritarian rule, then it’s all good, and the renewed push to recognize human rights is being met by resistance because Filipinos are more concerned with trying to survive. The push for human dignity. And he hits what he calls “wealthy elitists” who are busy defending their “secondary rights” because their “basic rights are already guaranteed.”

On the first point, Suing doesn’t go much into how exactly the Philippine government plans to do better with the economy so that this compromise on human rights can even be halfway tolerable. He cites Lee Kuan Yew’s Singapore, but doesn’t offer concrete solutions on how stricter governance could be better economically. Perhaps it’s because there aren’t that many plans on the administration’s part right now, as the main focus since day one has always been this war on drugs. Cool.

[pull_quote]By the way, isn’t the right to due process a basic human right (also, the exact and only thing advocates are fighting for in this particular scenario) that every citizen should have access to?[/pull_quote]

On the second point, Suing ridiculously generalizes the people he’s criticizing. Yeah, it’s hard to deny that there will always be people who are doing this to throw shade at Duterte without thinking about how they’re doing it (but mostly because there are legit reasons to criticize him), but he apparently pigeonholes all critics into this classification without even going into specific details of how the advocates he’s criticizing are simply doing it out of “elitism” or “intellectual snobbery.”

Whatever “narrow, self-serving view” of human rights he’s accusing people of aren’t exactly fleshed out; and by the way, isn’t the right to due motherfucking process a basic human right (also, the exact and only thing advocates are fighting for in this particular scenario) that every citizen should have access to?

And Suing argues, based on a column from The Guardian, that the application of rights should be “pivoting around evolving time and context and the achievement of greater ends,” by which he means making life better for the poor. My dude, you’re turning a blind eye to the criteria you just laid out, because poor people are getting shot out there. People are getting shot out there.

Although Suing is completely entitled to his opinion, our biggest issue is maybe he should’ve actually laid out decent arguments that actually stop readers in their tracks, if only for a moment. He does make one (just one) good point about partisan opposition to the president (that we shouldn’t hate mindlessly), but generalizes the rest. This is the barest of minimum, and even though this is part of the largely less moderated section of the Huffington Post, the fact that it’s even on HuffPo kinda means you have to do better. And dear young people, there is a better you can aspire to.

SHAREBy Scoutmagph Video by Two Fold We dropped by Sunnies Studios to ask...