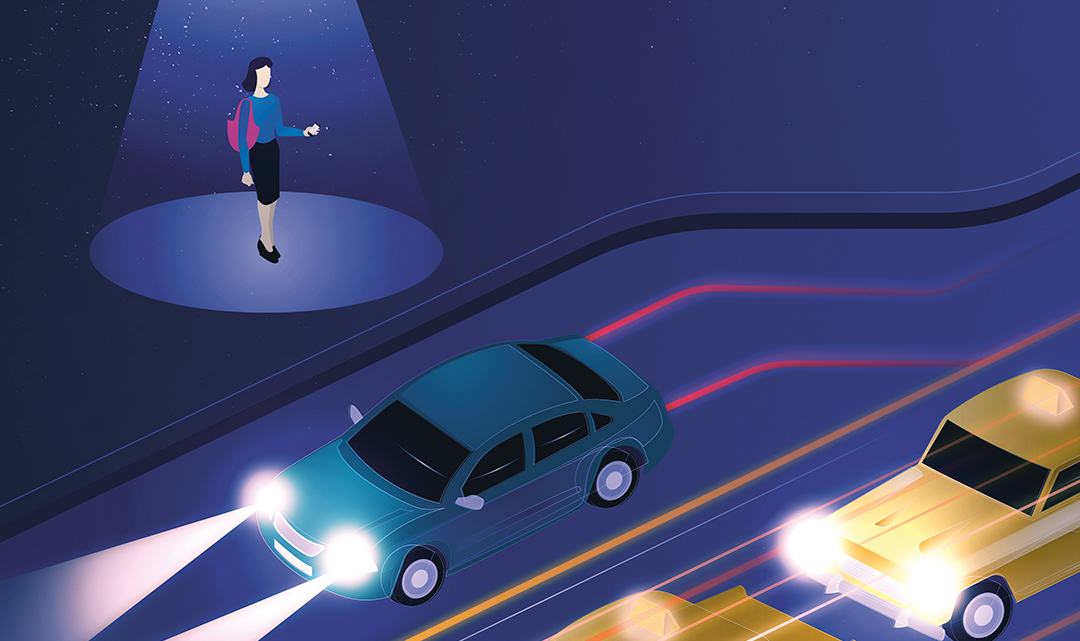 Manila is currently at war. It’s a simmering conflict in the streets, and as with every war, there are at least two sides. In one corner, its inhabitants who need to get around the concrete labyrinth. They are the ones who must brave rage and disrespect and the occasional brandishing of a katana (really) by the very same people who they entrust with their money and their lives for passage around the maze.

On the opposite side, there are the veterans who ply these routes. These shrewd taxi drivers seem to see passengers as walking stacks of money, not anxious people with their own destinations. This is probably the only thing that justifies their blatant disrespect toward them whenever they turn down a customer or mouth off on them out of inconvenience. Thankfully, not all of them are like this. It’s unfortunate, however, that the bad apples spoil the game for those who remain honorable. It’s not something the best of them deserve.

There’s a third side to the mess, though. A new pantheon of heroes who want to change the game. Or at least, the masses see them as the heroes—the drivers either despise them or defect to them.

This is who’s fighting for control of Manila’s streets. It’s a war of ideals and virtues, of policies and orders. It isn’t a war that needs to involve gunpowder or swordplay or any sort of violence at all.

For some strange reason, however, it does. It seems that one can no longer ride a taxi, the most convenient form of transportation over a considerable distance, without being on the defensive. You’ll have to brace for the possibility that a taxi will refuse to take you where you need to go, or worse, the driver will become hostile after you make a seemingly innocuous request at some point in the ride. There are ridiculous viral stories from last year of drivers going postal on their passengers after they refuse the infamous “kontrata” (fixed rates instead of going by the meter) and of drivers threatening physical violence, such as the aforementioned story of one driver brandishing a freaking katana on a passenger and his kid, among others. They make the concrete jungle a real jungle.

This is where services like Uber and Grab (formerly known as GrabTaxi) come in. Who they are and what they do need no introductions by now—everyone already knows, through experience, what gaps they fill and that they fill those gaps well—but they deserve it, anyway.

Uber started out as a ride-sharing service, or a way for people with cars to make a little extra money on the side by giving other people rides. Grab began as a way for people to flag taxis down without the risk of rejection, but soon also moved into Uber’s territory of ride-sharing, eventually expanding into a motorcycle taxi service, a courier delivery service, a helicopter service (which Uber now has, too), and a carpool service. Both companies have seen an influx of partners (operators/drivers making up the backbone of the employee base) partly due to some of them treating it as a glorified taxi service, buying fleets of cars and conscripting rosters of drivers to work under them.

The two ride-sharing services and everyone who’s signed up to work for them (Grab has at least 75,000 drivers nationwide, as of March 2015) are raking in millions of pesos simply because of an overall better customer experience.

“I have noticed that it’s easier for people to get a ride with us. It’s true that [some taxi drivers are choosy and unfriendly],” says Eduardo Godeloson, a GrabCar driver who used to drive a taxi. Grab’s GrabCar service places a fixed fare depending on distance and whether or not it’s currently a peak hour, unlike Uber, which relies on a metered fare with additional Surge multipliers depending on traffic and peak conditions. No matter what they choose, passengers are guaranteed a ride, unlike regular taxis, whose drivers can be choosy. “Not that I’m bashing other drivers because I know that there are also drivers who aren’t like that, but what about the passenger’s needs? They just want to go to their destination. That’s what I’ve observed.”

It’s this silent backlash against traditional taxis (and their drivers, mostly) that’s allowing Uber and Grab to creep more and more into the public transportation market. And to the ordinary commuter, it only makes sense—why should any denizen of the city, already bogged down by all sorts of urban stress, have to suffer dealing with shady cabbies who don’t really want to take you where you want to go when you can easily book an Uber? Why risk riding with a guy who might turn angry and belligerent the moment you stand up to him, when both Grab and Uber strictly hold all their drivers accountable? Why waste time with a driver who doesn’t know where to go when you can be in vehicles that are obligated to have smartphones with Waze?

[pull_quote]It’s baffling, then, why a lot of the drivers in the established system still refuse to wake up and change the behaviors that are mucking up their reputation. It’s literally the only thing driving customers away from them—doesn’t it say something that people would always rather pay more for what they think is better service?[/pull_quote]

This gradual loss of their market share is why the long-established system is trying to fight back. The Land Transportation Franchising and Regulatory Board were arresting Uber drivers for not having a franchise as recently as October 2014. They eventually stopped after they decided to try to figure out a way to make the services legal. Back in August 2015, traditional taxi operators protested to the LTFRB, resulting in an attempt to arrest Uber and Grab operators if they were not able to properly register themselves by a certain date. Uber and Grab were able to get it done, but as late as last December, however, a Quezon City court slapped a TRO on the companies, suspending new driver applications after a local transport group complained; as of February 2016, the court has decided to not extend the TRO.

“I believe that as long as the government allows Grab to operate and deems [them] legal, it should be okay,” comments Pedro Bande, a GrabTaxi driver. Taxi drivers are free to sign up for GrabTaxi, even without having to go through their operators. GrabTaxi actually ends up being more beneficial to cabbies, who still have to make their 24-hour boundaries for their operators, by sending them more passengers their way. “Some operators are sketchy; they’d still put old cars out there just to make a profit. It’s good that the LTFRB made Grab [and Uber] legal, because these services use brand new cars. What the LTFRB is approving are brand new cars.”

“I don’t think taxi drivers and operators have the right to get mad at Grab and Uber,” says Godeloson. “We became legal and everything. We’re all just making a living.”

But is there any way these two sides can coexist?

Even though Uber and Grab are the most ideal choices we have right now, a regular taxi is, in theory, still a more practical choice for those who can’t afford the former’s comforts. Uber fares are prone to skyrocketing thanks to Surge and the way it brutally applies the laws of supply and demand. Grab is slightly cheaper, but an added booking fee on top of the metered fare might be too much for some people’s budgets. Whether commuters like it or not, the humble taxi is still important.

It’s baffling, then, why a lot of the drivers in the established system still refuse to wake up and change the behaviors that are mucking up their reputation. It’s literally the only thing driving customers away from them—doesn’t it say something that people would always rather pay more for what they think is better service?

“I think LTFRB needs to tighten up their rules and regulations so that everyone follows them,” says Bande. “The LTFRB should monitor all the drivers. And then there should be fitting punishments. I have a feeling they’re having a hard time monitoring drivers because of a lack of manpower.” Bande also believes that the LTFRB is at fault for being corrupt enough to grant permits to units that are really old.

Perhaps at the end of the day, even though the two systems can exist side by side, the real reason Manila’s citizens still flock to Grab and Uber is symbolic. The two services are an intelligent, yet most importantly, hopeful and sincere solution not only to the problems we have with traffic and transportation, but also a dark and corrupt system.

Since then, the LTFRB has capped Uber and Grab’s time-based rate increases to twice the fare to make it easier for commuters. Meanwhile, Taxi drivers and operators under transport group Drivers Unite for Mass Progress and Equal Rights are protesting Grab and Uber anew, this time accusing the companies of not paying taxes. (Grab has denied these claims, while Uber has yet to comment.) So far, the transport groups don’t seem to address or acknowledge their operators and drivers’ behaviors and attitudes that lead people to prefer ride-sharing.

Even though they’re not fully pure (both here and abroad) you worry less about an Uber driver possibly knocking you out with chemicals. When you key in your destination, you can be sure a GrabTaxi won’t shake his head at you and speed away. We’re assured that our voices will be heard when we rate a driver. We’re tired of the old system that lets impunity slide, so we embrace the new way and hold on to it as best as we can. The more the old men continue to ignore this and refuse to adapt to it, the more they’ll lose the important war on the streets.

This article originally appeared on the April 2016 issue of Scout and has been edited.