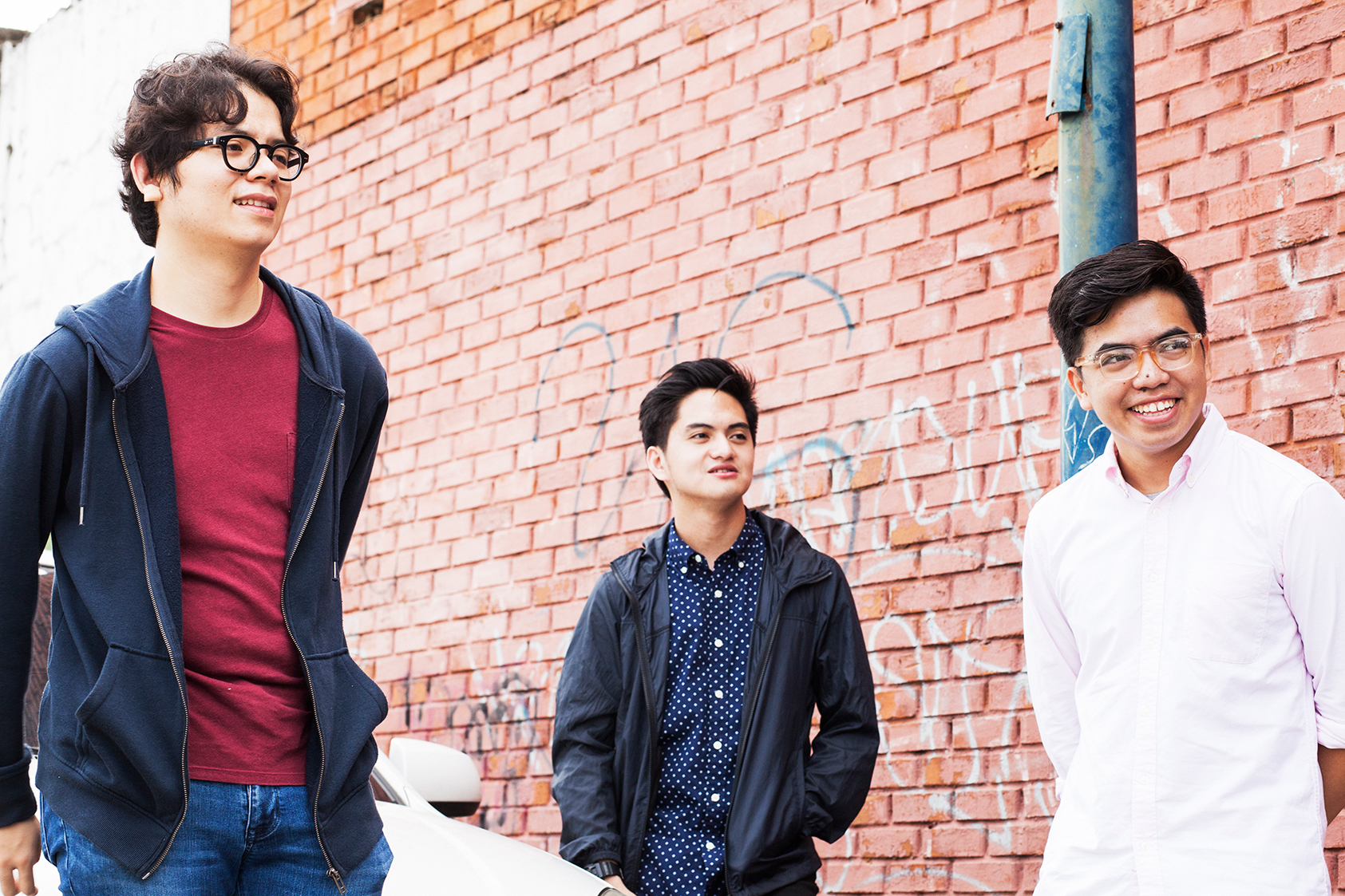 Fervent but not aggressive, playful but not meandering, and entirely serendipitous, the music of Tom’s Story is a shower of golden flecks of rhythm. The progression of their songs can lull you into the comforts of a familiar, recurring beat, then quickly unfold itself with a crackling burst of guitar and drums that surges through you like a sonic boom, then takes another step back, and repeats. The band doesn’t bend genres as much as it borrows from them: emo, post-rock, and math rock, to name a few. 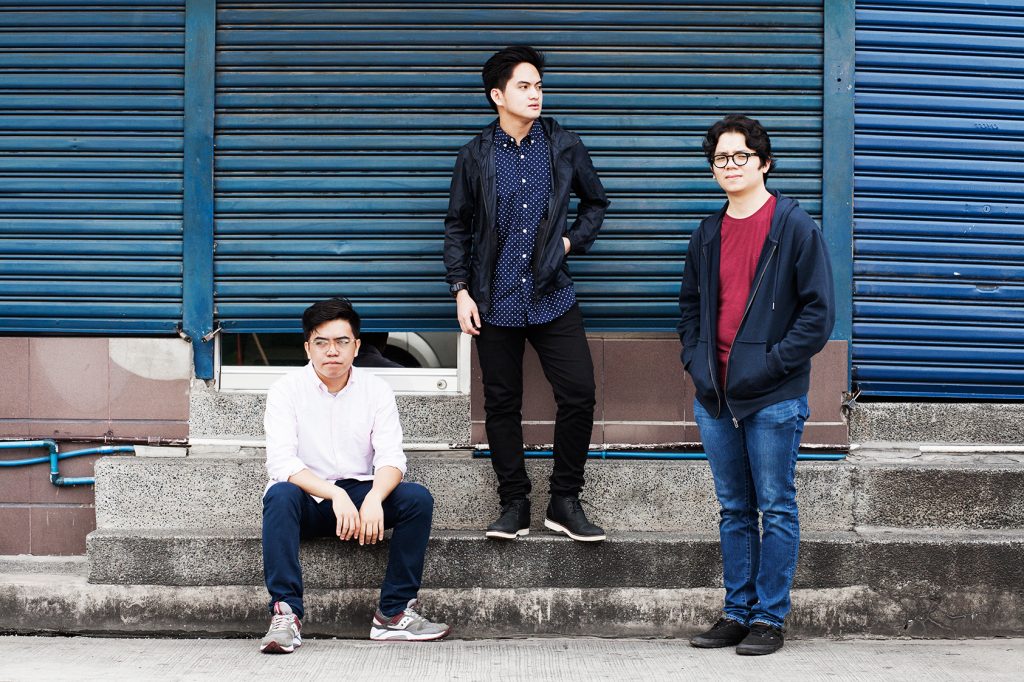 But Tom’s Story doesn’t really try to pigeonhole themselves into labels. “We don’t really like to put our music into one specific genre. We’re really just an instrumental rock band,” shares Tom Naval, bassist and one of three members that form Tom’s Story, alongside Gabba Santiago on guitar and Degs De Guia on drums. Their inspirations are a mixed bag: Circa Survive, Toe, Enemies, John Mayer, and Chon. When asked about what they’re listening to right now, each of them also gave different answers. Tom has Elephant Gym and Death Cab For Cutie, Degs goes for Into It Over It and You Blew It, and Gabba shares Tycho, Enemies, and Totorro.

It’s no surprise that they each have different tastes. They are different people, after all. But where does the cohesion come from? What holds the narrative threads of Tom’s Story?
The answer, as cheesy as it may sound, is friendship. Tom, Gabba, and Degs have been childhood friends since they were in grade school in Colegio San Agustin, Makati. “Degs and I have been classmates since Grade 2, and we’ve been classmates with Tom since Grade 6,” says Gabba. They’ve had their fair share of hobbies, but he shares that music is what really what stuck with them between the tail end of their high school years and their freshman year in college, circa 2010. “We just played covers before. Si Tom kumakanta pa nga noon, eh.” 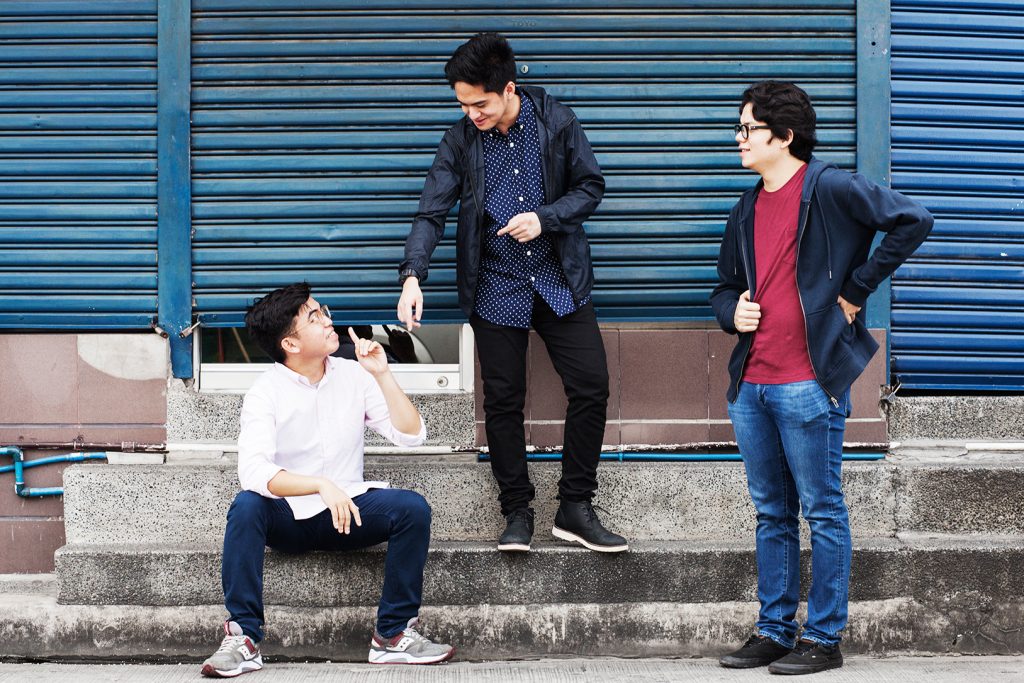 Over the years the band has solidified their sound sans vocals, and has been a constant presence in the local gig circuit. They’ve played internationally and have opened for visiting indie acts such as Silent Scenery and Anechois. Their self-titled debut album released earlier this year is a testament to the band’s talent; each song from the 10-track album stands independently from each other. “The first album is really just a compilation of songs over the years,” Tom quips. At times ambient, sometimes groovy, sometimes ethereal, the music of Tom’s Story traverses through transitions and build ups with finesse.

But the band’s music (and almost any band for that matter) is best heard live. When a band has a vocalist, you normally find yourself fixated on the frontman, reading the lips to follow what is being said. But with music such as Tom’s Story’s, it is possible to sing along to songs with no lyrics. Tom mentions that the band can play without him or Degs but not without Gabba, and for good reason. As the guitar riffs play you will find yourself singing-shouting to each unmistakable, distinct strum. The songs (Anchors is a personal favorite) sculpt impressions, moods into your psyche, while the songs themselves are sculptures—structured and aesthetically pleasing to the senses.

The songs sculpt impressions, moods into your psyche, while the songs themselves are sculptures—structured and aesthetically pleasing to the senses.

In short, their music is a real trip. And so are Gabba, Degs, and Tom. As serious as they play their instruments, you can tell they’re having fun when the play. How else could they make such groovy music? When asked about memorable gigs, they’re quick to reply.“We’ve actually just had a memorable one a week back,” Tom shares. “There was a few seconds of no electricity in the venue but Degs just played like it was nothing. When the light came back, we just picked it up from there.” Of course, they also list down their album release in Route 196 with Autotelic, Musical O, and tide/edit, which they also consider their dream lineup to play with.

Right now, the band is going steady. Tom is busy with his on-the-job training while studying Mechanical Engineering, Gabba has just graduated, and Degs has a full-time job in a startup. They have their busy months when it comes to playing in gigs, but they find time to rest. In their early 20s, they don’t look like they’re in a rush. “We’ve been composing songs, conceptualizing,” Gabba shares when asked about their second album. The band notes that first albums are for the band, while second albums are for their fans. With that, we’ll keep it chill and just wait.

This story appeared in the September/October 2016 issue.

SHARE[Trigger warning: Mentions of harassment and rape.] Growing up, I’ve seen girls being...

SHARE  This local indie classic of a band has proven its longevity and...