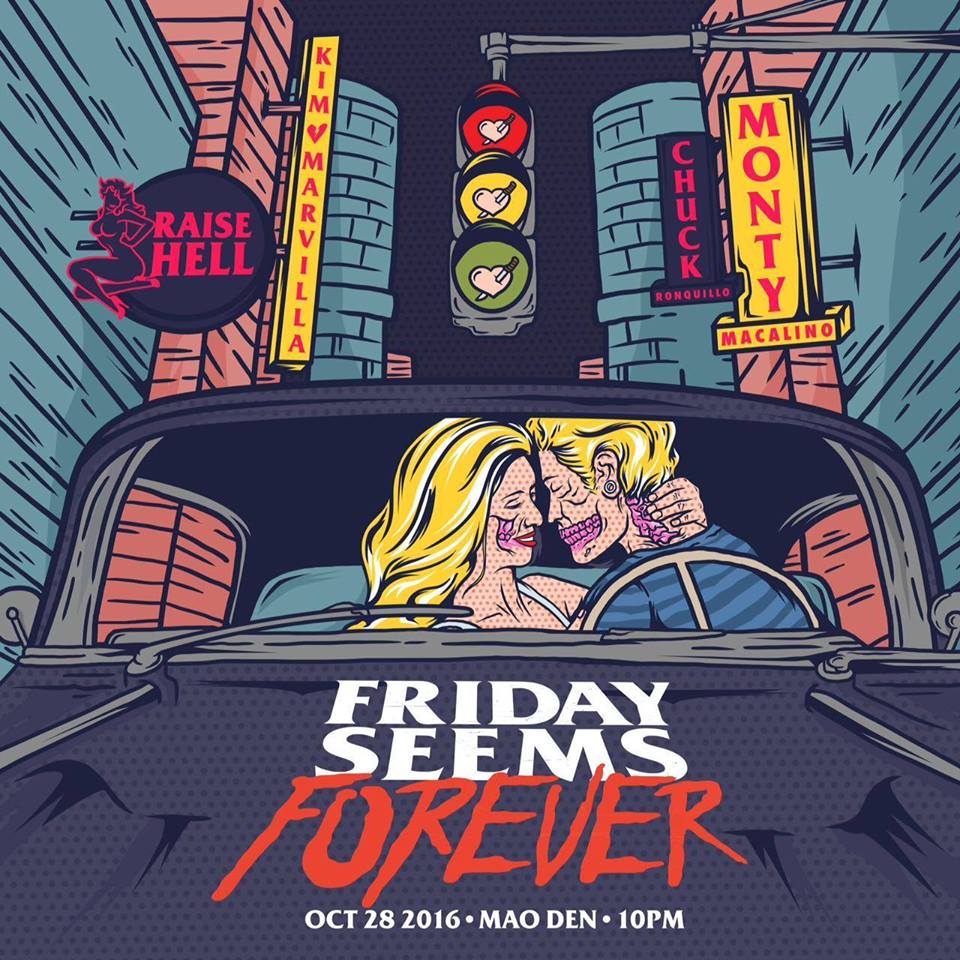 Halloween is when almost everyone is itching to go out and maybe get really, really drunk. Destroyed. Wrecked. Whatever you want to call it. Gone are the days of childhood trick-or-treating, but we’re all for it if that’s right up your alley. Just make sure to catch up right after for this year’s craziest happenings.

We’re always after the newest where-to and go-to, much especially during the most awaited weekend of the year. Mark your calendars, people. This short little list of ours shows how you can spend the spooks in the coolest way possible. Say no to the FOMO!

FRIDAY IS FOREVER
First stop: what better way to bring out the monster in you than the ultimate monster himself? Start your Halloweekend with a bang, folks! We’ve always wondered how partying in a zombie apocalypse with other creatures would feel like. You shouldn’t fall short with your costume too. Snag those tickets and dress to the fullest with RX 93.1’s Zombie Tunnel at Tunnl Makati this Friday. Are you ready to #PartyLikeAMonster?

We totally understand if you’re on a tight budget, especially when you’ve spent zero on that DIY costume of yours. However, we don’t want you to miss out on the booze and fun, which is why we scouted The Drop x The Block: Pre-Halloween Party at Black Market for all you people ready to slay the Halloween game until the AM. Though the rad underground music and the eclectic crowd are incredibly tempting, we’re just giving you a heads up for the long lines of ghosts, devils, sumo wrestlers, and other beasts that are dying to get inside.

No costume and don’t want to feel the party vibes? We got you, fam.

If there’s anything more stressful than being caught up in a murder scene, Murder in Museum by Ayala Museum x Mystery Manila just amped it up a notch. Call your friends and solve the case of who killed the museum curator this Friday. Was it the security guard? The concierge lady? Or maybe even your own friend?! The pressure is real. Escape the museum before the killer catches you.

SATURDAY NIGHT AND WE IN THE SPOT
Future freaks, come out and play! In what might be the biggest underground spooky gathering of the year, Today x Future requires one rule: don’t be lame and come in your finest #FilmVSTelevision costume on October 29. Wicked freebies for the best one, too! We’re totally unconventional film and TV character meet-ups at Cubao X.

MONDAY MADNESS
To cap off the weekend, let’s go far out and take you to outer space. The Palace Manila is throwing a space-themed interstellar Halloween Ball this October 31 and everyone in the solar system’s invited. Make sure you chuck away those last minute alien ears as they want everyone to go over the moon. Cosmic Spocks, futuristic astronaut costumes, #ManusxMachina Kim and Kanye, and Demogorgons are highly welcomed.

Not the raving type? No problem. If you’d rather spend your Halloween at a gig, here’s one where you can ham it up with the hottest local acts in the music scene. Pinoytuner and Grrrl Scout are rounding up bands like Sandwich, Autotelic, Cheats, and Pedicab. No costume, no entry of course! It’s Halloween! No buzzkills allowed.

Before making a name for herself and gaining traction across the country, BP...