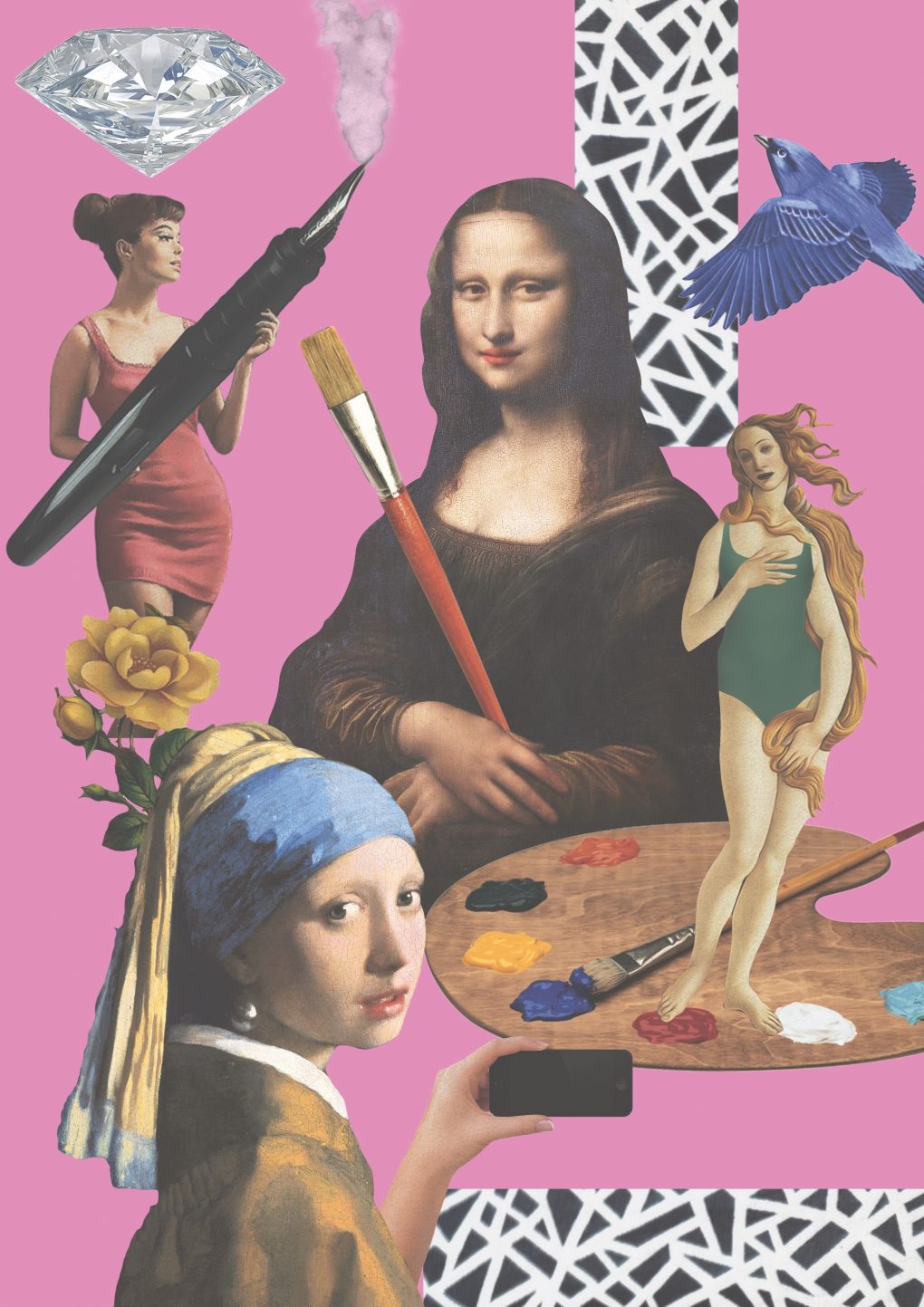 If Mona Lisa were given a chance to redesign her portrait, how would she paint that smile? If Venus were offered the upper hand to recreate the image of her well-celebrated birth, how would she interpret and make known to man her oceanic and godly origins? If the girl in “The Girl With A Pearl Earring” saw her tronie 350 years later, would she be pleased that it was taken at an angle where she was caught off-guard? Or more importantly, how would she feel that she wasn’t even acknowledged by her real name? That people only know her as the girl with that pearl earring?

Now that it has been brought to the light of the day, we can’t help but speculate—if these women of art lived today where feminism is on its full swing, they’d probably tell us how tired they are of being gazed at. Perhaps they’d even proceed to let us know that they are worth far more than by being someone else’s muses and simplifications of beauty, love, and fertility. We assume they’d even go beyond defending themselves; they would most likely take the higher seats of redecorating and retelling their respective stories and tales from the past. And just as how we imagined it to be, this is what happens when the muse strikes—she becomes the master of her own life.

When asked about the role of women in art, oftentimes in the pursuit of finding the perfect words, it takes an ocean to get the message across to everyone. But Mao Zedong needed just six words: “Women hold up half the sky.” Modern times recognize the woman who not only knows how to revel lavishly under the spotlight, but also the woman who toils harder behind the scenes. She is no longer just a thing of beauty to be stared at. The modern woman as an artist is a creator. An innovator. A collaborator. A storyteller. And an orchestrator. She swarms all light for the purpose of scattering it, and this is why the art that we know today has never been this colorful. If Atlas is the god bearer of heavens, then women must have been the conjurer of light—and this is how the women today hold up half the sky.

As sisters zealously venturing in the arts ourselves—both of us using collage as a medium through which we share our stories and illustrate our advocacies—we often get pried on who, for us, are the most inspiring women. It’s always a struggle drawing lots from a myriad of supreme female figures. There’s just so many heroines to include. When we ask each other this question though, with expected ease and candidness, we’re able to tell right who those women are. Among others, it’s got to be Maya Angelou, Coco Chanel, Frida Kahlo, and eternal poll-breaker Beyonce.

When asked about the role of women in art, oftentimes in the pursuit of finding the perfect words, it takes an ocean to get the message across to everyone. But Mao Zedong needed just six words: “Women hold up half the sky.”

It’s likely that these personalities are topping others’ lists as well, and almost self-explanatory as to why. Clearly, these women are much coveted for being the creative wunderkinds that they were and are—among the finest in the fields of literature, fashion, music, and visual arts. Still, to us, there is something more fetching about these women that stretches past their being firecrackers and geniuses. In fact, it’s what we think has turned them into these things: they’ve been, just like many of us, victims of unfortunate events such as objectification, discrimination, abandonment, assaults, post-traumatic stress, loss, and/or defeat which had likely largely inflicted in them a sense of inferiority and self-doubt. And yet, these women refused to remain sufferers of their smaller stories. They had fiercely defied staying a casualty of their circumstances. They are not even just survivors who merely chronicled and lived through their monstrous pasts. They are women who repainted their lives back to vitality. Each recycled her pain and turned their experiences into a work of art. As if to life’s harshness, they retorted, “Take whatever the hell you want from me, just give me back my canvas!”

Writer and civil rights activist Maya Angelou is an eminent figure in the performing arts and literature at large. She excelled as an author, actress, screenwriter, dancer, and poet; in fact, it is said that her versatility in the arts is an understatement for the vast expanse of her accomplishments. Illustrious as her achievements were, Maya had quite a disquieting childhood. At an early age, from being so traumatized by racial prejudices and discrimination, sexual assault, and bearing witness to violence, Maya spent several years as a virtual mute. However, with an insane amount of courage and monumental support from her loved ones, Maya broke ground by translating her life experiences into literature. This brought her to put into paper and spoken word her most popular autobiographical work, I Know Why the Caged Bird Sings. And the most striking of all lines speaks volumes of Maya’s life and how she walked through the fire and had risen from her ashes: “A bird doesn’t sing because it has an answer, it sings because it has a song.”

One can never know the eternal beauty of a self-portraiture if he or she is not acquainted with Frida Kahlo’s works. Her masterpieces are reflections of how Frida really was a woman of her time: bold, lively, beautiful, and highly spirited. What most of us do not know is that, her artworks are endurances of her dark sufferings from the past. At the age of 18, she was involved in a bus accident. Skewered by a metal handrail that entered her hip and exited through her vagina, she was not expected to live. It was after several medical interventions and while bedridden that Frida began to paint. And if her artworks are telling us stories, it was because all her physical, emotional, and spiritual joys and pains were translated into masterful paintings. Her husband, Diego Rivera, once said about her, “Frida is the only example in the history of art of an artist who tore open her chest and heart to reveal the biological truth of her feelings. The only woman who has expressed in her work an art of the feelings, functions, and creative power of woman.”

We reckon that the challenge for feminism then, and for womanhood in general, is to not only expose and wallow in the oppressions we’ve experienced, boxes we’ve been placed into, and silencing they’ve had us women taste for centuries, but to ultimately take creative responsibility for our lives.

The lover of the classic little black dresses can’t thank Coco Chanel enough for her alteration and re-creation of the modern woman. Prolific and revolutionary as she was, Coco Chanel was known for deviating from the “corset era” and have liberated women by creating and designing clothes which are loose on the waist (but still elegantly fitting) and dresses which are a little bit above the ankles. Her revered fashion is a staple in the wardrobes of those well-off, but unknown to most, Chanel was homed in an orphanage for the poor and the rejected. However, for what she has braved through and how she has persevered, Chanel will always be an emblem of hard work and determination. With the legacy she has brought upon the world of fashion and women, what she said rings true: “Hard times arouse for an instinctive desire for authenticity.”

Of course, there’s the one who at some point made us question the worth of the 24 hours we’ve been endowed with daily due to the immensity and intensity of things she’s been able to accomplish with her own. Fan or not, we can all agree it’s quite an understatement to say that Beyonce is bionic and iconic at what she does, otherwise, would a concept of a visual album ever be realized in the history of music—two albums at that—with her latest giving us a little history lesson on the hard lives of black women, calling out infidelity, and yet ultimately teaching us about forgiveness? There is a reason that the general consensus about Bey is always that she is goals. There is a reason there’s a so-called #BeyHive. There isn’t only real work behind the “magic” that she produces, there are also real emotions, and in the case of Lemonade, real pains. Through all her challenges, her creative resilience burned harder and wins. True enough, she told Elle in a recent interview, “I hope I can create art that helps people heal. Art that makes people feel proud of their struggle. Everyone experiences pain, but sometimes you need to be uncomfortable to transform.”

And so these women—Maya Angelou, Frida Kahlo, Coco Chanel, Beyonce, and hundreds of other unapologetic heroines of the arts—are the women we pictured to be the essential muses who would gladly strike if only to own and share their stories in the most authentic and artistic ways they know how. Novelist and Pulitzer Prize winner Eudora Welty once said, “I like the feeling of being able to confront an experience and resolve it as art.” We reckon that the challenge for feminism then, and for womanhood in general, is to not only expose and wallow in the oppressions we’ve experienced, boxes we’ve been placed into, and silencing they’ve had us women taste for centuries, but to ultimately take creative responsibility for our lives, to design for ourselves a more palpable reality using our experiences as raw materials versus remaining a victim of our injured pasts. When the lights of the skies go out, it’s still much better to blaze up a candle than to curse in the dark.

This is why art will always be a good ally of feminism; it allows us to communicate our hearts’ desires, longings, fears, retributions, shams, hopes, and dreams. We are most fortunate that we live in an era where, literally, our lives—and the chance to recreate it—is at the tip of our fingers. The only thing that stands in the way is our refusal to believe it. And you know what they say when a woman finally tells the truth about her life? The world will split open.

You’re more powerful than you think.

This article originally appeared in the July-August 2016 issue, and has been edited.

by Lex Celera In a time where local politics is always a headline...

Admit it: You still get absolutely lost in life more times than you’d...