You probably heard of the entire Bliss brouhaha that happened a couple months back. In a fashion similar to 2 Cool 2 Be 4gotten’s controversial R-18 label, Bliss was rated X by our trusty old friends working at the MTRCB. Thankfully, during the film’s appeal for a second review, Bliss was eventually bumped down to R-18, uncut in its full uncensored glory.

Like this controversy’s effect on most viewers, this only made us want to watch it even more. 3 out of 4 Scout team members attended a screening during its opening night and damn. This movie was one wild ride from start to finish.

Bliss follows popular actress Jane Ciego (played by Iza Calzado, who is absolutely stunning as the character everyone wants a taste of) after her onset accident at a film shoot. Disabled, helpless, and practically on the verge of insanity, she remains trapped in a house with her unemployed husband (TJ Trinidad) and a mysterious nurse (Adrienne Vergara). And we all know nothing good is going to come out of that situation.

Ya’ll gotta see it to believe it. Bliss is quite something to process–difficult to fully digest but will leave you craving for *Audie Gemora voice* more.

Here’s our list of reasons why you can’t pass up this cinematic experience.

Philippine cinema isn’t really famous for its thrillers, but Bliss is a gem amongst the few dark local films that managed to work. The audience feels as wary and suffocated as Jane is in the movie, constantly beguiled by repetitive scenes and eerie noises. Its hazy and sometimes distorted cinematography is successful into placing the viewer into the perspective of its protagonist, leaving an overall bitter taste that makes them scramble for answers.

2. It parallels aspects of showbiz IRL 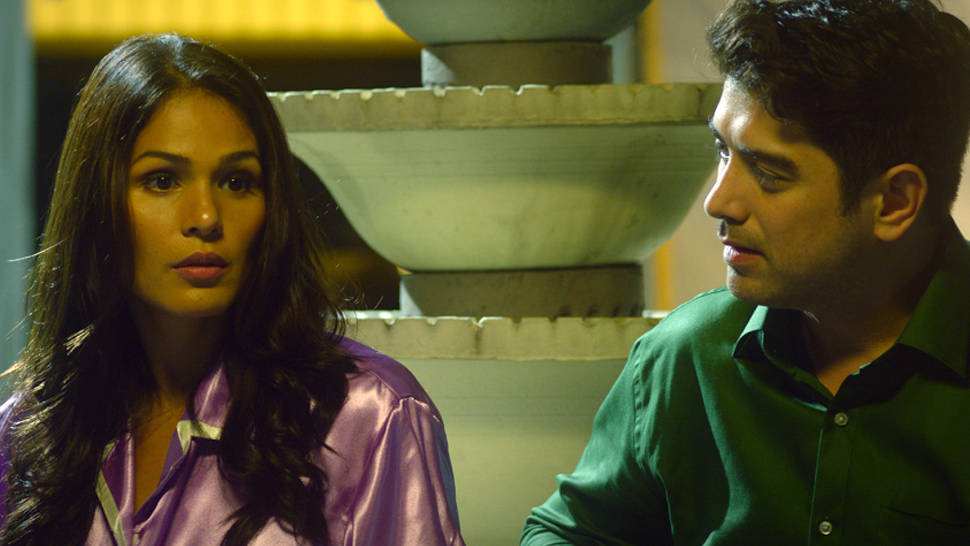 In one scene, Ian Veneracion and Iza Calzado’s characters mention the movie Inception, which is one of the many films Bliss is inspired from (Misery being another one). Bliss plays out like a dream within a dream, a movie within another movie. It gets even more overwhelming when you notice themes that mirrors actual life, such as Ian Veneracion’s unnamed actor character starring in an alcohol commercial (which is actually the case with Ian Veneracion himself in real life), Bliss being Iza Calzado’s (and her character’s) most daring role yet, film directors from hell, and more.

In true Jerrold Tarog style, Bliss thankfully adds a dash of (dark) humor in its dismal play. Tarog never fails to include at least some laughs in his movies, and we see this in similar one liners from his other work, like Heneral Luna and Sana Dati. No matter how black the comedy is, they effectively evoke some much needed lightness for the audience.

I think this is a no-brainer. Iza Calzado bagged the Yakushi Pearl Award at the Osaka Film Festival for her role as Jane. While she no doubt shone throughout the movie, her daring portrayal was supported by a wonderful cast. Adrienne Vergara, who plays aloof nurse Lilibeth, is a stunner who just nailed creepy. Audie Gemora was absolutely frightening as an abusive, Cannes-starved director, while TJ Trinidad was the epitome of an emasculated and egoistic husband. Great performances all around for this film.

5. It’s going to leave quite the impression

Bliss is filled with shocking sequences that’ll leave you utterly speechless once the credits begin to roll. It’s got the whole mix in–creepy themes, a mystery that viewers will be itching to solve, suspicious characters, and an unreliable narrative. The final climax is a horrifying scene that spells out mindfuck quite neatly. Definitely more than your money’s worth, if you ask us.

SHAREOne Click Straight released their debut album after being in the gig circuit...