After the Department of Tourism drew serious flak for releasing a video similar to the South African ad, the issue on the controversial promotional video remains in unsteady waters.

Just yesterday afternoon, the DOT issued an official statement articulating their termination of contract with the McCann Worldgroup Philippines. This is what they said: 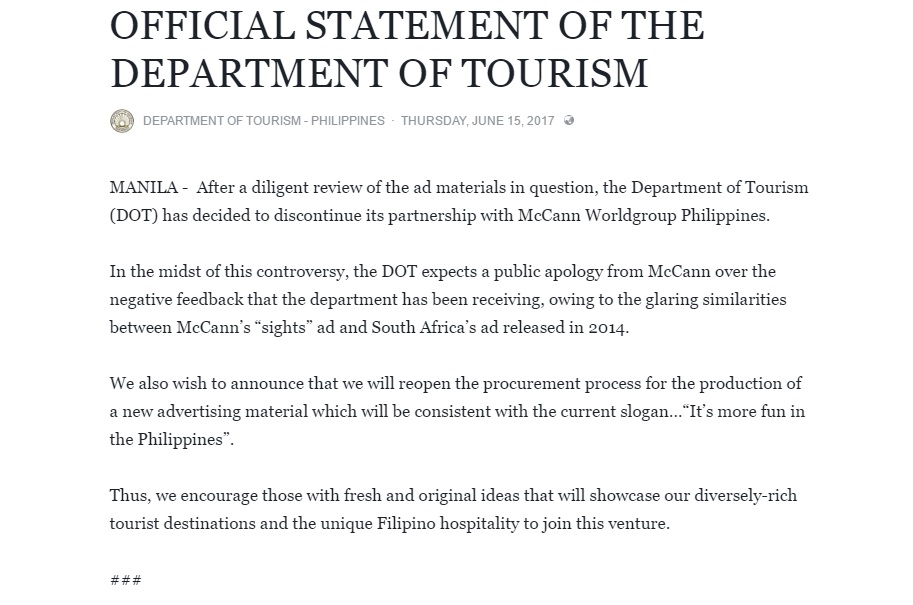 The statement ends in high spirits, with the DOT looking forward to receiving new ideas that can bring out the best of the Philippines. After all, that’s what tourism promotion is all about, right? Well, we hate to break it to you, but it isn’t that simple. Clearly, there’s more to this issue.

McCann Worldgroup released a response earlier today to the DOT statement, saying that while they respect the decision of the department, they have not received any formal communication about its termination of contract. Yet McCann has thanked the department and has wished them well for their future undertakings.

The subject matter became even more confusing when both parties issued their official statements. The question is: What is really your stand, DOT?

Let’s do a quick recap on the events regarding the Department of Tourism promotional video controversy.

And no matter how much we want a good ol’ happy ending for both the parties, Facebook users have expressed disappointment on the DOT’s apparent hand-washing:

Others, remaining optimistic, encouraged a nationwide contest on who can come up with a brilliant idea for a new Philippine tourism video:

Where do you stand?

Get a fresh whiff of Amoy Ano’s hyper specific scents