Screened at Mandaluyong’s Shangri-La Plaza’s Shang Cineplex Cinema 4, there will be seventeen films in total, from seven Latin American countries: Argentina, Brazil, Chile, Colombia, Mexico, Panama and Venezuela. Better grab the opportunity, because hear us out—admission is free! Yes it’s all for free, so be sure to catch the screening schedules of the films you want to see below as admission will also be on first-come, first-serve basis, open 30 minutes before screening time. 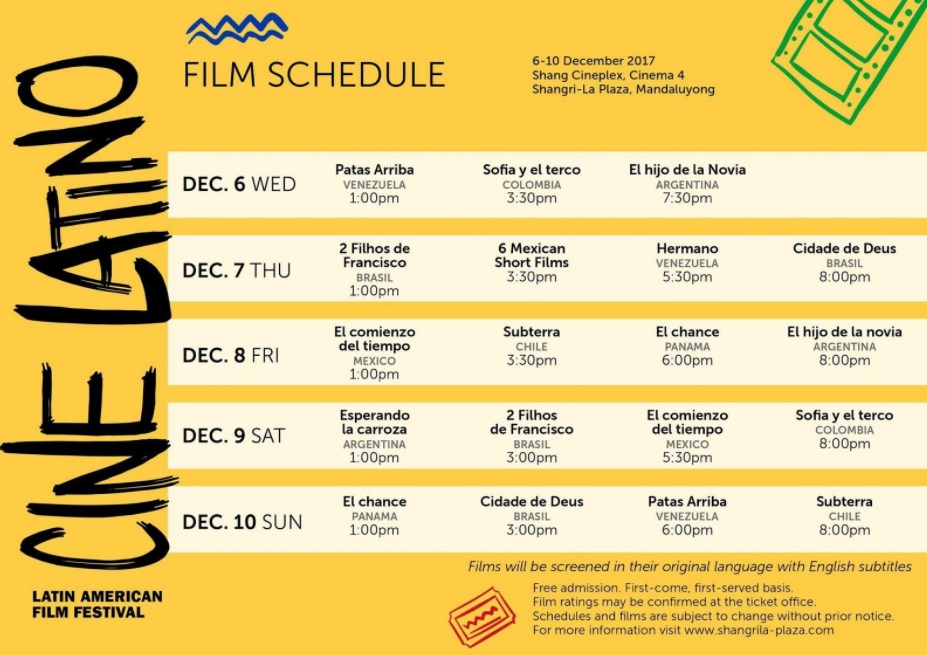 Here’s five of our picks of movies to watch at Cine Latino 2017:

This ’80s Argentinian dark-comedy film by director Juan José Campanella is about how a mother, Mama Cora, is still living with her son but is forced to move out because of her daughter-in-law. In result, her children fight over who will take care of their chaotic mother.

This Brazilian drama by director Breno Silveira is about two boys who pursue their childhood dream of becoming singers. This musically rich film, coupled with the underdog characters, will make you look back on the dreams you had as a kid.

A Chilean drama by director Marcelo Ferrari that is based in 1897 and centered around the mining industry, tackling monopoly and popularly-known harsh labor conditions. The protagonist is a courageous man, who driven by his suffering workmates, tries to change things.

The essence of time is highlighted in this Colombian film by director Andrés Burgos Vallejo,  as an aging couple  living in a routine for so long, plan a trip in order to break the cycle of their monotonous lives. However, this “dream trip” remains a plan. This the perfect watch for those who dream of getting away.

In this comedy from Panama, director Abner Benaim depicts a story of two housekeepers of an aristocratic family who are constantly mistreated by their superiors. While the family is out on a trip out of town, Toña and Pacquita, try to take control of their boss’ mansion. What begin as a small revenge plans, ends up becoming something bigger.

Cine Latino 2017: The 1st Latin American Film Festival will run from Dec. 6-10, 2017 at the Shang Cineplex Cinema 4, Shangri-La Plaza, Mandaluyong. Admission is free for all, with tickets on first-come first-serve basis.

A win for the students and teachers