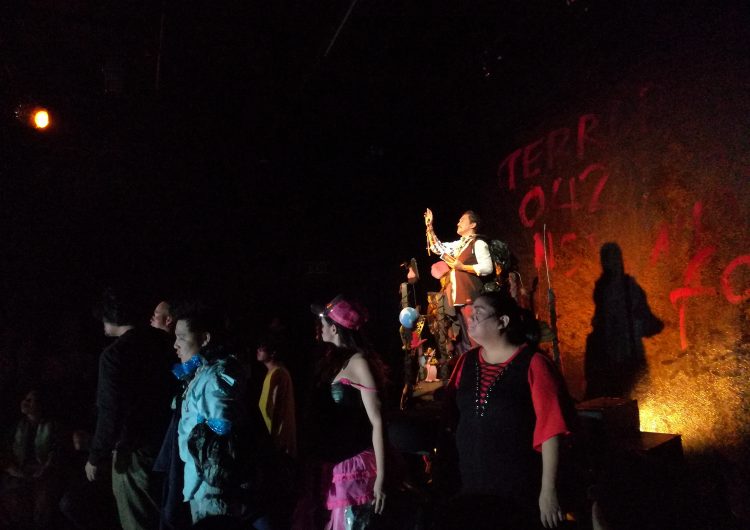 When Shakespeare wrote the play Richard III more than 400 years ago, he depicted the reign of the English king as tyrannical, marked by boorish neglect for morality, and his egomaniacal and selfish nature. Who would have thought we’d see that reflected here and now—in our country, at this time? RD3RD brings that to the modern Philippine stage. An adaptation of Shakespeare’s Richard III, the play is showing this January at Ateneo de Manila University.

The play revolves around the rise to power, and the reign of Richard III. But unlike Shakespeare’s, this version of Richard hits closer to home—his kingly clothes seems to feature an embellished barong, his dagger is a handgun, and his words bellow “putangina!” in nearly every line. Juxtaposed too, are commentaries to today’s bloodbath. As Richard sent men to murder his brother to cement his ascent to the throne, we could also see today’s equally bloody perspective – those same men are killing a helpless man to add another statistic in this country’s death toll.

“Unlike Shakespeare’s, this version of Richard hits closer to home—his kingly clothes seems to feature an embellished barong, his dagger is a handgun, and his words bellow ‘putangina!’ in nearly every line.”

A strong assortment of characters from the original play are featured, made to reflect the same characters that are the oppressors and the victims of these horrific times. The entirety of it is compelling, with the actors taking advantage of the intimacy of the theatre space, as their words and acting not only the only ones driving the point home but also do the environment.

The show went to a close; actors and persons who made the play possible were greeted with applause and cheer. Then, Dr. Anton Juan, one of the directors of the play revealed that in each and every seat in the theatre is a name of an EJK victim. That led me to this perspective: that when each of us goes to bed every night secure and in the comfort of our homes, there might be someone in the same city, perhaps a dozen blocks away, whose muffled pleas are drowned by gunshots and helpless screams. No due process. No questions answered.

I exited the theatre, and started the ten-minute walk back to a gate leading out of the university. It was nearly 10PM. Left with nothing but the sound of my footsteps and my thoughts and recollections of the play, I took a deep breath, and tried to look at the bigger picture.

In an archipelago where there is no snow, each snowflake is a droplet of blood from thousands killed. The howling winds are foul words and horrid curses from national television and viral videos, echoed in each keystroke by faceless scribes. Our country has become a frozen landscape, littered by blackened bodies, wailing widows and orphaned children—all shrouded by apathy and indifference, by deceit and violence. All these are what RD3RD tries to illuminate. To light fires. To urge. To signal these times as the winter of our discontent.

RD3RD is staged on selected dates until January 28 at Ateneo de Manila University. You can reserve tickets (₱500 for regular, ₱300 for students) at https://tinyurl.com/RD3RDTickets or visit the official Facebook page at https://www.facebook.com/RD3RD/. You can also call 09088884247.

SHAREThe jig is up: The Marcos family is finding its way back to...

SHAREWith this year’s Scout Music Fest right around the corner (15 days away...