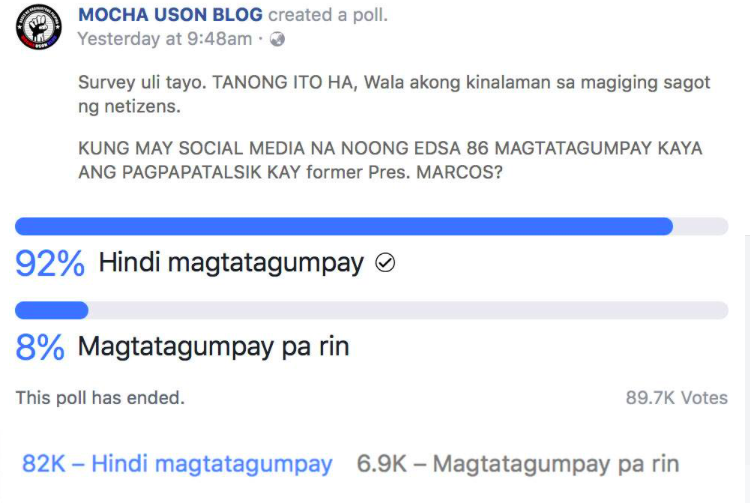 Last Sunday, on the anniversary of the 1986 People Power Revolution at EDSA, our good Assistant Secretary of the Presidential Communications Operations Office Mocha Uson posted a poll. Seemingly innocently, she asked: was EDSA—in her audience’s opinion—a product of fake news?

While I can tell you that the answer is surprisingly yes—only that EDSA was a reactionary result of Marcos’s fake news and lying, not any media organization who was on the side of truth and justice at the time—it’s clear that she’s trying to ramp up support for her cause. That is, to say, to discredit anyone who happens to oppose President Duterte by way of throwing everyone in with the lot of the Aquinos.

The take was so sub-zero freezing that even the Palace, via Harry Roque, the master purveyor of terrible, hypocritical political takes, had to speak right up and tell her off. In the bigger picture, though, it doesn’t really matter, because she and her supporters and the president’s supporters will go on to believe whatever they really want to believe. And it’s so easy to manifest these crusades using something so simple and banal as a poll on Facebook.

Why? For one thing, trolls can get going and game the system by using dummy accounts to vote for the choice they want as much as possible. In the aforementioned poll’s case, obviously “Yes, People Power was a product of fake news” won. That also emboldens supporters into commenting “yes” on the post’s comments section.

And with this, it’s much easier for her to divide us even further. Now she doesn’t even need to explain away any nuances, whether false or otherwise—all you have to do is vote yes or no, because fuck nuance, right? This is what they already believe in and they don’t have to explain it to anyone who doesn’t understand, or chooses not to understand. We already knew that they couldn’t be reasoned with using words on a screen, but this whole poll business is them saying it louder for those at the back.

It’s easy to blame Facebook for allowing these things to happen, but nobody knew that it would be so simple to subvert something so seemingly innocuous into something more evil. I also can’t blame Facebook if they’ve got their hands tied with the issue of spreading misinformation, because even the most objective measures can be hijacked as long as there’s a way to hijack them, trolls to do the hijacking, and money to pay the trolls. Facebook striking down fake news sources on their own initiative would inevitably color their operations politically, and I get all that.

The problem is something none of us really know how to fix on its social media face, and while we struggle with how to deal with the DDS, their side keeps on dividing—even when one of their own chides them. Nowadays, sometimes it feels like the best thing Facebook can do for all of us around the world… is to blow itself up.

Bottomline: Whether you voted “yes” or “no” to her polls, it doesn’t matter. It’s most likely been rigged from the start, and doesn’t hold any water since the questions are already skewed towards a certain answer.

SHAREOur favorite web series is bringing its hot wings (and even hotter questions)...

SHAREFollowing in the footsteps of bands Jensen and the Flips, Tonight We Sleep,...