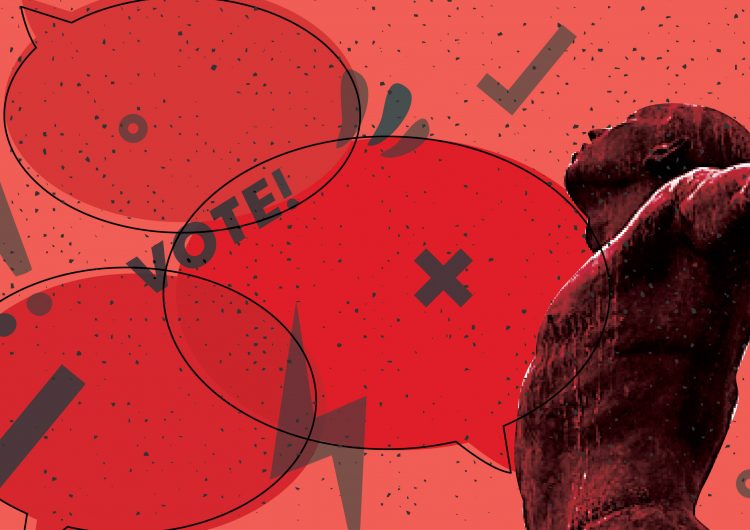 Once a year, change comes in the form of the University Student Council elections. The USC elections in UP Diliman kindles a spark within the students and gives them the courage to stand up against a flawed system. As members of the student body, it is our duty to ensure the progress and advancement of our university.

With intensifying allegations of sexual misconduct, censorship, slander, and deception, this year’s USC elections prove to be a hot topic among people both in and out of the university. Leave it to UP to hold an election where friendships are forged, bonds are broken, and ideologies are questioned.

Despite the obvious camaraderie, the elections expose the grim side of the student body and of campus politics in general, as political parties tear each other down and candidates go against their own morals to please the voters. At this point, we’ve pretty much heard everything the candidates have to say. Now let’s hear from the constituents. That means “voters,” Brenda.

Athena Presto, sociology instructor and former president of UP Namnama, voices her perspective on this year’s elections. “Every election season is a huge marketing festival,” she says. “Candidates and political parties have a unique branding used to urge the student body to vote for them.”

”Every election season is a huge marketing festival. Candidates and political parties have a unique branding used to urge the student body to vote for them”

Many can be deceived by the performance of these candidates, but deception has no place in UP Diliman, especially in the university student council.” She continues to urge students to vote, as a competent council is impossible without the voters’ comprehensive assessment. And no, looks won’t cut it. And NEITHER DO THEIR FAMOUS RELATIVES.

And no, looks won’t cut it. And NEITHER DO THEIR FAMOUS RELATIVES.

Journalism student Red Carao also shares her stance. “In times when thousands are dying and millions are living in poverty, we need student leaders who will never leave the people’s side and will never compromise their democratic rights.” She shares her fear of a nationwide dictatorship, saying that at any moment, You-Know-Who could ban student councils, publications, and organizations that act as the voice of the toiling masses.

Incumbent CHE SC Chairperson Pauline Indita gives her insights as part of the student council, saying that students must be critical in their selection, keeping in mind that work ethic, while necessary to perform basic duties, is only a fraction of what it takes to lead the student body. “Principled leadership and passion for the Filipino people will distinguish the student leader that we deserve and need from the rest,” she says. After all, the heart of leadership is in the passion and desire to serve.

And what is election season without a little drama? Recently, the blue partylist ALYANSA had their fair share of backlash after publishing an accomplishment report of the entire university student council, claiming it to be theirs exclusively. The student body was quick to call ALYANSA out on their bullshit, leading to a public apology via a post on ALYANSA’s Facebook page.

More problems emerge as the yellow partylist KAISA UP was accused of censorship last Saturday during the UP Solidaridad Mudslinging Debate after “forcing”—take note of the quotation marks, Brenda—the UP Repertory Company to end their presentation mid-scene. Moreover, a member of the red partylist STAND UP running for USC Councilor is accused of enabling his frat bros to chant “Isang malaking puke!” and give derogatory remarks to several women during the Bar Operations last year, where said candidate served as deputy head.

Among this year’s “hot topics,” the most serious allegations involve sexual harassment from another member of STAND UP running for CSSP Representative. STAND UP faces criticism for allowing an “alleged sexual harasser” to run and defends their stance, saying, “We apologized, reached out to the victim, and are undergoing corrective measures, but the victim is not ready to talk yet.” I’ll leave it to you to figure out what’s wrong with that statement.

Drama and prejudice aside, the political parties share a common purpose: to give the students a voice, and to let that voice be heard. This isn’t A Quiet Place.

Our responsibility as voters transcends the confines of the voting booth. Speak up. Take off your rose-tinted glasses and acknowledge the inconvenient truth of our society. Only then can change begin. If there’s one thing I learned in Sociology 10, it’s that the oppressor stands no chance against the oppressed once they realize their power. So vote, for this is our power.

8 tips for taking care of your curly hair