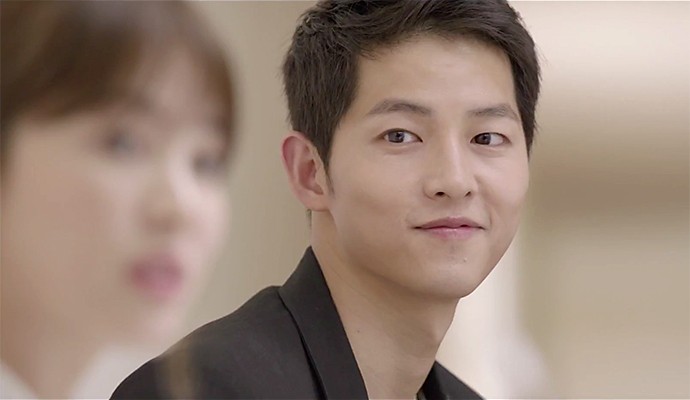 The sun has risen once again as 2016’s top summer K-drama, Descendants of the Sun, is reportedly coming back with a second season. KBS’ drama department head, Jung Song Ho, has confirmed a sequel as a way to repay the fans who have stuck with the show from the start.

It is still unsure if the sequel would continue to revolve around Yoo Si Jin (Song Joong Ki), his heroics, and his love story with Kang Mo Yeon (Song Hye Kyo). Though rumors have also been spreading that the planned second season will revolve around the show’s side couple, First Lieutenant Yoon Myung Ju (Kim Ji Won) and Master Sergeant Seo Dae Young (Jin Goo).

Either way, one thing’s for sure: more than a month after the conclusion of the first season, the drama turned into a phenomenon that managed to break records in both Korea and the rest of the world. Its gargantuan success spawned a strange new disease that emerged in Hallyu scene, sweeping across the globe.

No one is safe from the so-called “Song Joong Ki Effect,” thanks to the leading actor’s portrayal of the drama’s main character. I repeat–no one is safe. Nope, not even you. Hell, you probably already have it already. It’s still spreading and not even renowned Dr. Kang Mo Yeon can cure it.

Not sure if you have it? You’re probably just in denial. You can diagnose and see for yourself with these top symptoms of the Big Boss fever.

1. Memes. It always starts with the memes slowly flooding your social media feed, and you being guilty of posting and sharing them. 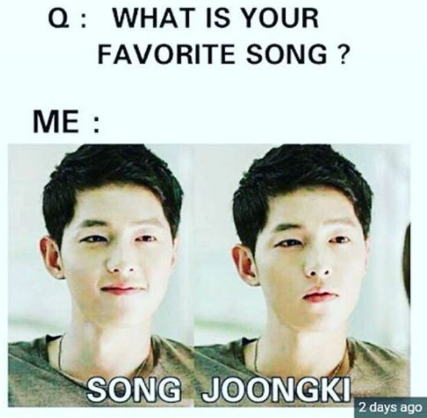 2. Merchandise. Cellphone cases, pillows? You most likely have at least one thing with Joong Ki’s (beautiful) face on it. 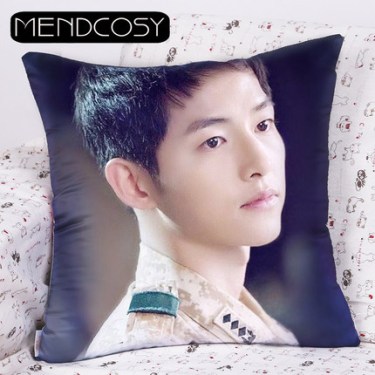 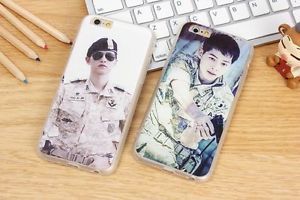 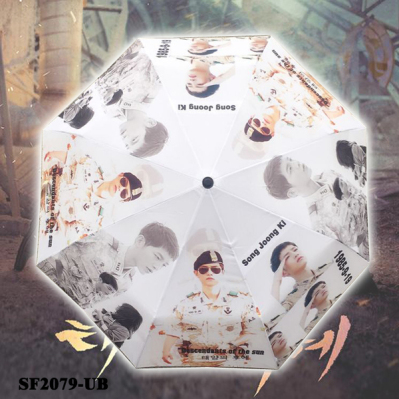 Images from ebay and workingwithgrace.wordpress.com

3. Maybe you’ll want to recreate iconic photos and scenes, regardless of your age.

4. Your favorite idols have caught Joong Ki fever too, tbh. And you find it awesome.

While AOA’s Seolhyun has also been very vocal about her obsession with Joong Ki even before the drama aired, Girls Generation’s Seohyun posted this edited picture of herself and fellow member Taeyeon as Si Jin and Mo Yeon in the iconic shoe tying scene. 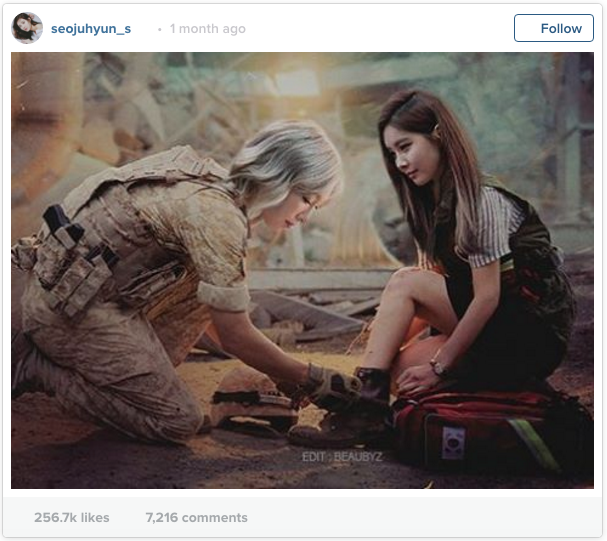 And who could forget this beautifully reworked poster featuring Running Man’s Kwang Hee? 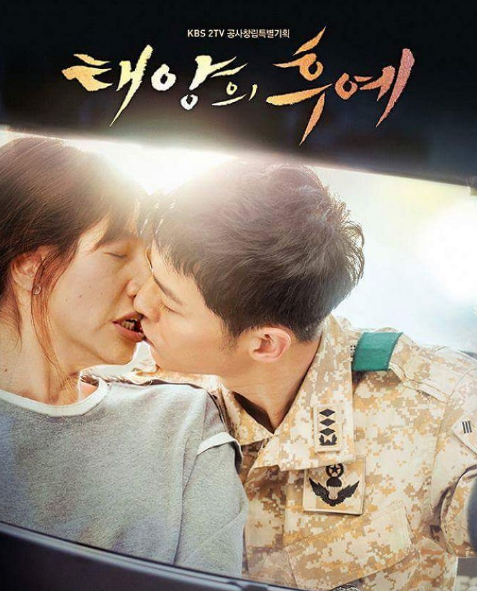 5. It starts following you to work or school. And you can’t escape it because even your teachers are head over heels in love with Big Boss. 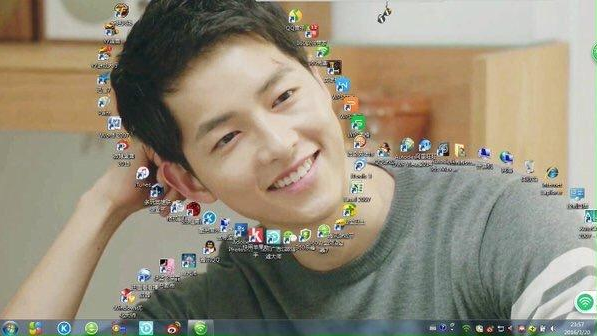 How can you study with that gorgeous smile staring back at you? Simple, have a professor that’s caught the same fever. 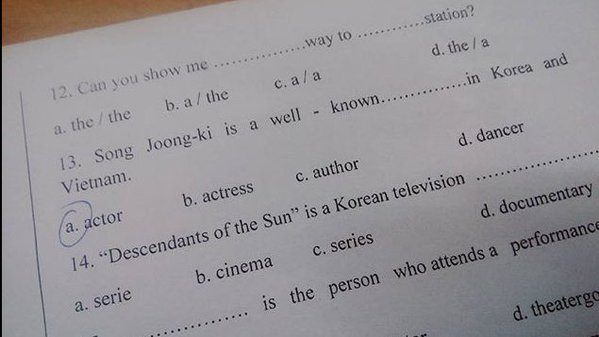 To cope with the sudden fan surge, KBS placed two cutouts of Captain Yoo Si Jin in their office lobby for fans to take pictures with. 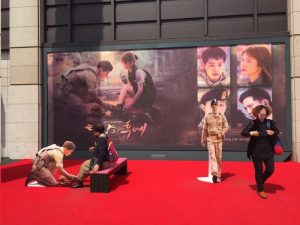 6. You would do anything to see him–maybe even risk your life by breaking your country’s rules.

North Koreans are reportedly among his newest fans. A North Korean defector has recently revealed that several North Koreans have been secretly downloading and watching the the drama, all at the risk of their own lives.

7. You want to go where Joong Ki as gone, even if it’s halfway across the world.

Greece’s Zakynthos Island, which was one of the shooting locations for Descendants of the Sun, has gotten so much tourist traffic that there are now special tours that cater to the fans’ needs.

But other fans have done it, nonetheless. Joong Ki himself expressed his concerns over his parents’ home becoming a tourist spot by curious fans. He admitted that he couldn’t stand the thought of such invasion of privacy. 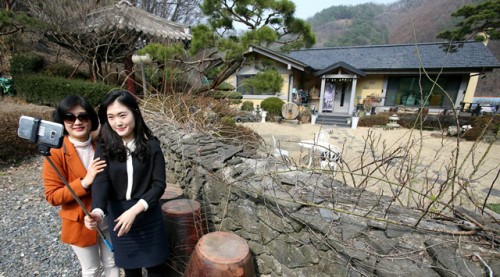 9. You secretly rejoiced when you found out that it’s about to hit local networks, regardless of the Filipino dub.

GMA7 recently acquired the rights to dub the show. You can judge for yourself and watch the official Filipino dubbed trailer.

10. You’ve either converted your significant other into watching the series and becoming a fan as well, or you’ve pissed them off by spending too much time fangirling over Joong Ki.

Men have gotten so jealous that their girlfriends and wives are directing all their attention to the drama star that China issued a public safety warning, telling its citizens to “beware of Song Joong Ki.” You know it’s getting real when an entire country is forced to issue a warning.

In the end, all we can be completely sure of is that this Song Joong Ki madness will last for a while. His upcoming movie, Battleship Island, has him playing an army role yet again.

You can’t really escape it; he’s everywhere. No matter how hard you try to deny it, you’ve got the Song Joong Ki fever. But perhaps this is one viral disease we wouldn’t mind catching. I mean how could you resist this?

SHAREREVERE is back with a new collection, and they aren’t holding back on...