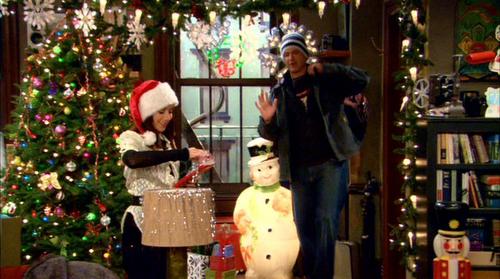 Is it just us or has it been really cold lately (yeah, okay, 25 degrees is already cold for us tropical folk)? This kind of weather could make anyone want to stay in bed all day. Picture it–you covered in blankets, alone with a cup of hot chocolate while watching some holiday flicks that could get that Christmas spirit on a roll. We did say that parties and reunions could become really exhausting after all.

Speaking of holiday flicks, which we’ve seen way too much of these days thanks to Hallmark Channel-esque movies–it’s time to ditch the movie marathon and reminisce some of your favorite TV shows. Whether it’s Friends, How I Met Your Mother, or The Simpsons, these series have got a bunch of hour-long Christmas specials too. Check our faves that you can binge watch this holiday vacation:

Friends: “The One with the Holiday Armadillo”

In the tenth episode of this cult classic’s seventh season, Ross decides to teach his son, Ben, about the Jewish holiday tradition of Hanukkah, and in an effort to do so, decides that there would be no images or representations of Santa Claus that year. He shows up as “Santa’s Tex-Mex friend: the Holiday Armadillo” and it was certainly an episode that shows lasting connections with family and friends.

This is actually the first ever full-length episode of The Simpsons and the first episode for season 1. Basically, it was the introduction of the Simpsons family to mainstream media, and what better way to introduce them than to start the series with a Christmas special! In this episode that premiered in 1989, Homer finds out that the Christmas bonus in the company he’s in is cut for “unskilled workers,” which includes himself. Homer then resorts to different methods that might help in saving the Simpson family Christmas.

That ’70s Show: “The Best Christmas Ever”

After watching How The Grinch Stole Christmas, Eric gets an idea to have a Christmas party in their basement which his father approves of, much to his surprise. The episode is filled with their usual crazy antics, all while jealousy arises when Eric sees Hyde giving Donna a special Christmas present.

How I Met Your Mother: “How Lily Stole Christmas”

An old answering machine sure can bring back old wounds. In the eleventh episode of HIMYM’s second season, Lily uncovers an old message in their apartment answering machine which has Ted saying mean stuff about her when she and Marshall broke up. A fight ensues between the two of them but *SPOILER ALERT* in the end, they make up and the gang’s friendship prevails. True friendship’s definitely part of the Christmas spirit.

In this New Girl episode, viewers can really feel how close the friends are getting and at the same time sympathize with Jess as her relationship with someone comes to an end. Just like the harsh realities of life, Christmas can be bittersweet after all.

The Fresh Prince of Bel-Air: “Deck The Halls”

Have you ever had a relative who doesn’t celebrate Christmas? Here, Will Smith’s character experiences the same situation and he’s determined to make his cousin’s first Christmas the best.

SHAREWondering what Jason Dhakal has been up to lately? According to his Twitter...