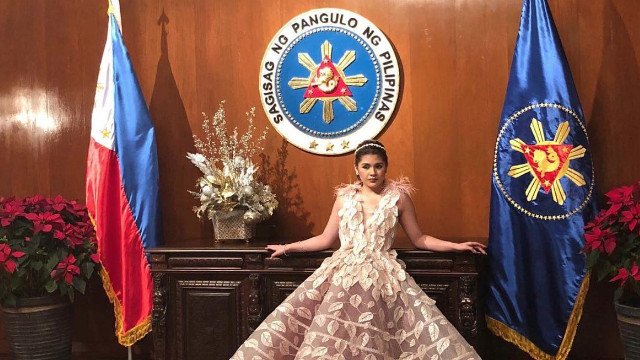 President Duterte’s granddaughter (Davao City’s Vice Mayor Paolo Duterte’s daughter), Isabelle Duterte’s lavish pre-debut photos of her frolicking in expensive gowns with her hired hairstylist and makeup artist shot at the Malacañang Palace have surfaced the net, and everything about it is just all sorts of wrong. I mean, what the actual fuck?

Not only might she be committing a felony by posing in front of the Presidential seal, but there’s a debate about Isabelle’s actual age. Netizens have reason to believe that the young debutante might actually be 15 years old. If these rumors are true, we question why she has to take pre-debut photos two years before her debut? And, out of all places, at the Palace? Having celebrated my 18th birthday myself, I know how it feels like to be excited for the big one-eight, but this is just too much. Tacky and tasteless, to say the least.

Amid, the young Duterte took to her now private Twitter @isabelleduterte to speak her sentiments on the haters by basically telling them to use their energy elsewhere:

But, we’re not taking any of it. There’s nothing wrong in celebrating one’s coming-of-age, but she really should’ve thought this one through. There is such a thing as taste and sensitivity. Just because you can do it, it doesn’t necessarily mean you should.

Surely, Juliana Gomez, daughter of Ormoc City Mayor Richard Gomez and the current representative of the fourth District of Leyte Lucy Torres-Gomez, didn’t ask parents’ for their office as her venue location for her 16th birthday celebration, last Sept. 2016. She kept it simple and fun with an intimate pool party.

Another example of a classy debutante: daughter of Quezon City’s Congressman Precious Castelo-Hipolito, Winona. This is what her pre-debut shoot looked like:

And her actual debut? She booked Crowne Plaza Manila Galleria as her venue, where Winona rocked a blue sweetheart ball gown for her special day. Her mom Precious, posted this photo of her taking her first dance with her younger brother.

The point is this, there is no harm in celebrating birthdays. Heck as Filipinos, we know that festivities runs through our veins, but there is a time and place. Isabelle, as well as the Palace could’ve been a bit more sensitive and empathic on the feelings of their constituents. Truly, a little bit of sensitivity would have helped.

What do you think?

The ‘Euphoria’ star scored another milestone in her list of ‘firsts’

SHAREIf you’re missing SarawaTine like all of us, here’s some news to beat...

SHAREPoliticos aren’t celebrities.  But love them or hate them, local politicians have found...