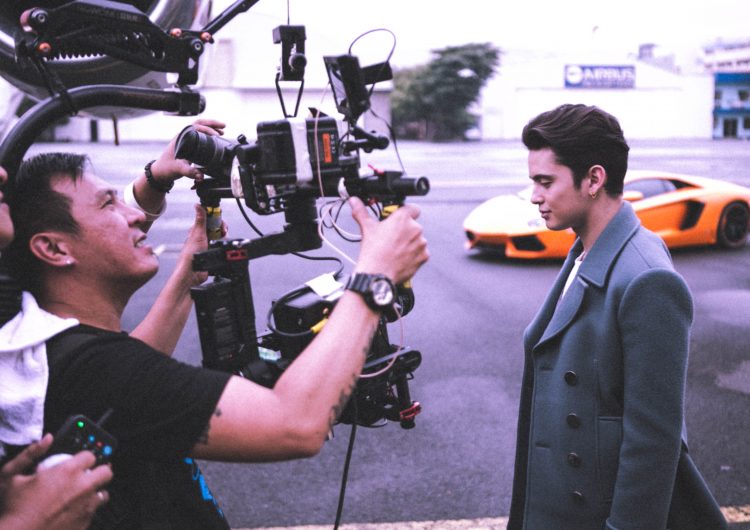 Last week, we finally got to see James Reid’s much-anticipated music video for his track “The Life.” Fans were more than looking forward to it due to the fact that it was co-directed by Nadine Lustre herself, along with renowned filmmaker Petersen Vargas.

What we got was definitely worth the wait. Not only was it beautifully shot, but Nadine also made sure to add a personal touch to James’s video, adding their own privately filmed clips of themselves traveling all over the world. These two are couple goals for sure, and it really seems like they’re making the most out of #TheL1fe they’ve got. James wasn’t kidding when he wrote that he was ‘livin’ it up’ with Nadine.

In the meantime, we got to catch up with photographer Andrei Suleik, also known as a close friend of James and Nadine’s. He was cool enough to not just send over some exclusive behind-the-scenes photos, but also talk to us about what it was like on the set of “The Life.” Check out our short interview with him as well as his pictures right here:

What was the set environment like when you were there shooting with James, Nadine, and Petersen?

I came in when the set was ready for Scene 1, it was still dark around 4:30 to 5:00am. Approached Petersen, said hi, and went straight to the standby area to check on James and Nadine. When I entered the room, it was very quiet, then I saw them typically fixing their hair and clothes. It seemed like a normal day until they were called for scene 1. Walked to the set and it was like a stage, curtains drawn and everything. We were at the airport, sobrang liwanag and there you see a Rolls Royce, a jet plane, and a bright orange Lamborghini. When James and Nadine stepped in, I knew it was gonna be a badass music video.

This is Nadine’s directorial debut. As a close friend of hers, what was it like seeing her transition from in front of the camera to behind? How was she like as a director?

It’s just so different when she takes control of everything. From details to vision, she wants what she wants. When she says na parang “I want this to be like this kasi this is how i envisioned it,” they really do make it like that. Hindi yung, “Sige, bahala na lang.” I never heard bahala na or sige, yan na lang on the set. If [she] needed to change the set, [she’ll] change it. She’s really into details and how she visualized every scene and frame. I think that is why the MV was really good.

Do you have any interesting or funny stories to share while you guys were on set?

So we landed from Japan midnight. Went straight to our respective houses and had a nap. Onset, Nadine realized that she forgot her clothes! So if you watch the music video again, the black tank that Nadine was wearing was really a shirt. She just requested the stylist to use scissors, cut it, and make it like that. Next thing you know, she looked hot in it, and pulled it off like she always does. Cowboy si madam.

Do you have any upcoming future plans or collaborations for your photography?

I do. I’m flying to Japan by the end of January until the first week of February. I’m taking a vacation again and I got invited to Osaka to do an exhibit of the photos during our Japan trip last October for Halloween and Nadine’s birthday! If you guys are there, you should visit the exhibit!

I’m also excited for their JaDine Revolution concert. I messaged Nadine that I want to take BTS from the start to the end of the concert. So expect a lot of photos!

SHARESo it looks like the Last Woman standing was left standing because she...

SHAREIf rom-coms taught us anything, it’s that love can be found in the...