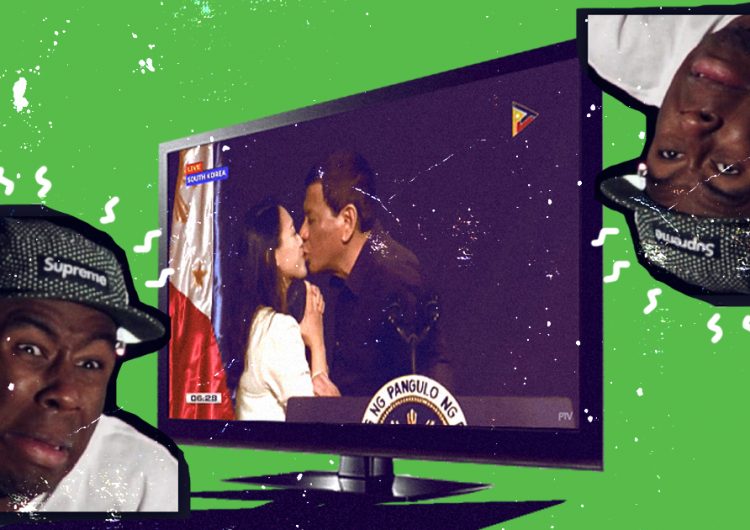 This kiss, this kiss; it’s horrible.

There’s a photo I’ve been trying to avoid for the last 24 hours. It has been plastered all over social media, and now, I am writing about it in order to face my fears, trypophobia included.

Duterte recently flew to South Korea for a state visit and his itinerary included a meeting with the Filipino community in Seoul. He ended his speech by calling a woman on stage, and kissed her on the lips. This is not the first time the President has done something like this. Even in his campaign trail, he’s been seen kissing women left and right. And unfortunately, I’m pretty sure this won’t be the last.

The image of Duterte kissing a Filipina OFW left a bad taste in peoples’ mouths as they voiced out their disgust on social media. Many saw it as a display of power and the blatant disregard of her agency. Duterte quips that the kiss meant nothing, and should not be taken seriously. Supporters say that it takes two to tango and even went as far as to claim that the woman liked and enjoyed the kiss.

It shows how the President and his administration sees women: stuck on objectification, undeserving of the post of Chief Justice, not entitled to privacy, dignity, and respect.

I am going to argue that it absolutely meant everything but nothing.

Supporters are saying that it is the critics that are taking the agency away from the woman, who has already surfaced and said that the kiss made her feel “kilig.” The President saying that his actions toward the woman meant nothing means absolutely everything.

It shows how the President and his administration sees women: stuck on objectification, undeserving of the post of Chief Justice, not entitled to privacy, dignity, and respect. The Duterte Administration has continuously shown that actions toward women mean nothing, starting from the Vice President down to the OFW struggling to make ends meet.

This cycle has already shaped the minds of Filipinos, women included, to think that this behavior is normal, that we can be disappointed but not surprised. Some may keep defending the President, pointing out that the woman has given consent. But it is important to consider to whom the consent was given, who in this case, is a person in power. Can the consent of a woman who has alienated herself because she has accepted such behavior as normal considered freely given?

The President asked a kiss from an OFW, a member of a demographic known to be prone to abuse. How many of these women found it hard to say no to the advances of their employers – persons who are likewise in power?

It used to baffle me to think why all of these madness did not end with “Ang mayor ang mauna.” The President has finally provided me with an answer. His actions toward us women don’t matter because we don’t matter. He was voted into power despite what he says and what he does, because in the grand scheme of things, we don’t matter. For the sake of security, order, and discipline. I know that now, I am disappointed, but I will forever be surprised. This behavior will never be normal.

SHAREBacktrack hip hop holds a special place in our 00’ walkman-playing souls. For...