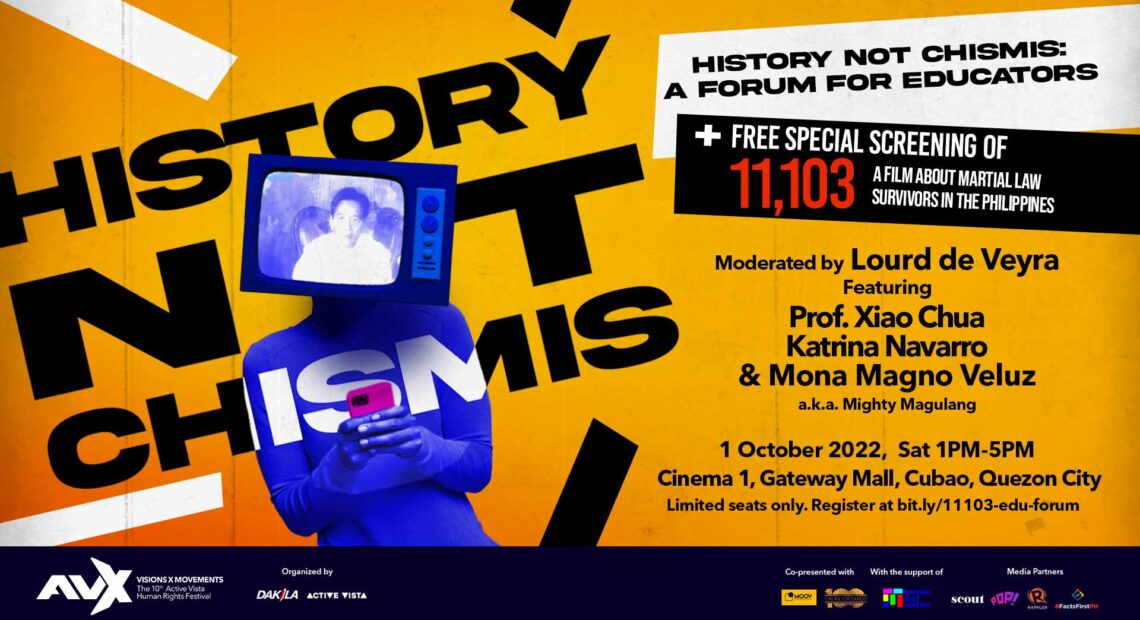 Manila, Philippines – Contributing to commemorating the 50th anniversary of Martial Law in the Philippines, the 10th edition of the Active Vista Human Rights Festival challenges the ways of viewing and tackling the topics of human rights, dictatorship, and historical integrity. DAKILA and its education arm Active Vista organize the forum and screening History Not Chismis targeted towards educators, particularly those in the frontlines of the classrooms. The event gathers around 300 educators, cultural groups, youth and civil society leaders on October 1, 2022, 1:00-5:00 p.m. at Cinema 1 – Gateway Mall Cubao. (Interested participants are encouraged to register here.)

On the topic and challenges of Martial Law education, DAKILA’s Education Director Darlene Ramos-Gan shares that alternative resistance needs to be uncovered or built in a noisy and disinformation-contaminated social sphere. “Telling engaging and relevant stories from the Martial Law era in innovative ways and through new platforms can help reshape the dominant consciousness of people towards authoritarianism and fight back against the narratives manufactured by the Marcoses,” she adds.

Injecting the arts and creative resistance in the afternoon forum, the organizers screened the new Martial Law documentary titled “11,103,” directed by Jeannette Ifurung and Miguel Alcazaren, and produced by Kara Magsanoc-Alikpala. The film tells the account of Martial Law survivors, particularly those the government recognized to receive reparations.

“The Martial Law years produced a Philippine cinema reflecting harsh realities of that time as well as artists who had taken up the mantle of truth-telling and social rousing,” states producer and Active Vista’s Festival Director Alex Poblete. “Film has always been a potent tool in the arsenal of the resistance against dictatorship and oppression. We hope and believe that is still true to this day,” Poblete adds.

“Educators are on the frontlines of preserving history and truth. We hope to actively engage teachers and all stakeholders in the education sector to reimagine their roles and innovate in nation-building towards protecting truth, historical integrity, democracy, and human rights,” Darlene Ramos-Gan added.

History Not Chismis is the last major addition to a series of innovative events of AVX: Visions and Movements – the 10th Active Vista Human Rights Festival. In pursuing to marry advocacy and the arts, the festival produced Politikal ang Comedy, Politikal ang Komiks, and KALAS/AKLAS: Politikal ang Pagtatanghal, as well as screenings of socially relevant films on MOOV – Cinema Centenario, Cinema ‘76, at UPFI and other cinematheques and communities in the country.