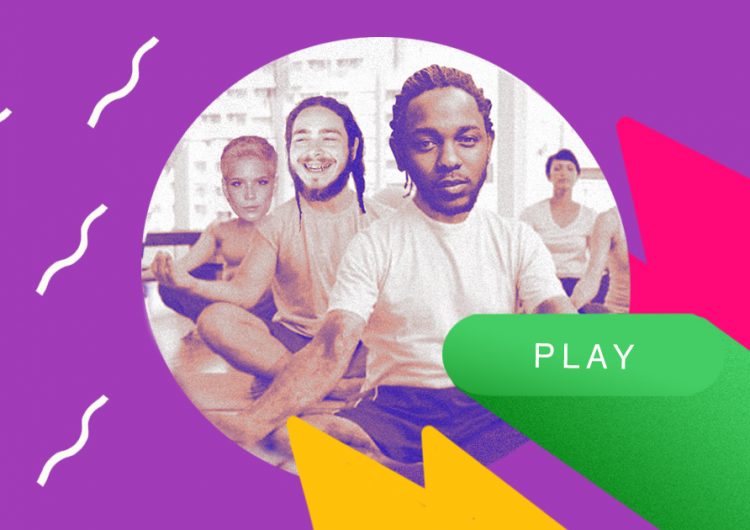 Thinking of yoga will give you a picturesque scenery of being one with nature. Imagine the weight being lifted off your shoulder, the cool breeze mingling with the trees, and achieving your inner zen as Kendrick spits some bars in the distance. We know what you’re thinking — are we talking “Poetic Justice” Kendrick or “DNA” Kendrick?

Yoga might be an ancient art form. But nowadays, the art form goes beyond wooden wind chimes and Hindu yoga chants. Spotify did a recent study and dug into unexpected genres found on yoga playlists. What they found was we’re not doing warrior poses with Tibetan singing bowls humming in the background anymore.

“We found that pop, hip-hop, rock, R&B, and reggae are being used to inspire yoga practices. For some, yoga is also taking the opportunity to get creative and expressive with the right beats to match,” Spotify’s study indicated.

It’s also revealed that more and more people are turning to one of Spotify’s 2.4 million user-generated, yoga-inspired playlists. “There’s been an 11% increase in yoga playlist streams year-over-year,” the study said. Wondering what top artists are taking over people’s yoga hour?

We’re telling you right now, they’re not from the Songs for the Burdened Soul compilation. We’re talking Khalid, Halsey, Post Malone, and even Kendrick Lamar.

Having a hard time on your meditation next time? These top tracks from yoga playlists around the world will surely take care of that for you.

“This evolution of using music as the base of our practice has almost become a yoga style of its own. It’s all about tapping into our subconscious, which music allows us to do more freely. Upbeat songs make poses stronger and more dynamic, while relaxing tunes can help us feel more grounded in our resting poses,” said Stylerunner CEO, Julie Stevanja, about the study.

People talking about WiiFit revolutionizing yoga are kidding themselves. These playlists are the real deal. Excuse us, we’re just going to do a downward dog Kung Fu Kenny and bad girl Riri real quick.

What’s the ultimate track that keeps your zen at bay? @ us @scoutmagph

I’ve always had that kind of heart, but decades since my first brush...

SB19 is starring in their own Christmas movie

We love one (1) advance gift