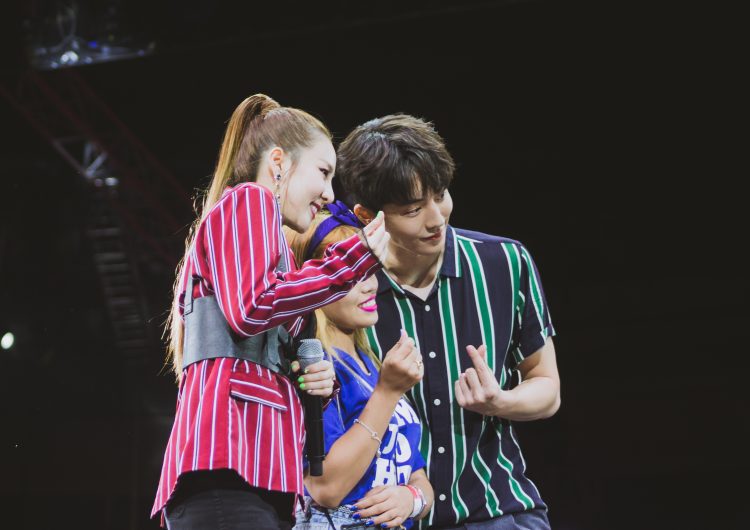 Fanservice is often frowned upon by hardcore media critics and fandom snobs. But we all know that a power of a fanbase knows no bounds. They support an artist through and through. And the most loyal ones, stick around whatever happens. The well-deserved props go especially for k-drama and k-pop fans nationwide. Fans from far and wide crowd the MOA Arena last Sunday for Penshoppe’s Fancon. But for who? None other than k-pop phenom Sandara Park and k-drama heartthrob Nam Joo-Hyuk. With their idols coming all the way to Korea, Filipino fans did not gather to the arena to disappoint.

Armed with their glowsticks and merch, fans of the k-wave swarmed over the arena, anticipating their idols. The fans were first hyped up by  ClubPenshoppePH’s Loisa Andalio, Ronnie Alonte, Maris Racal and Khalil Ramos, Keiko Necesario, and IV of Spades. This fueled fans for sure. We know this because when Dara and Nam Joo got up on stage, they went full-on ballistic.

Imagine fireworks inside the arena. But instead of explosives, it’s the fans with their screeching from left to right. Our idols went out to bond with everyone in the arena through a fun, quick-fire Q and A. They even strutted on the runway and shared their ideal date scenarios.

Dara, who do you miss when you’re not in the PH? “Sinigang!” ???#PenshoppeFancon #DaraAndJooHyukforPenshoppe

Aww, did you hear that? This is Joo Hyuk’s most memorable moment in the Philippines! ? #PenshoppeFanCon #DaraAndJooHyukforPenshoppe

Without a doubt, the highlight of fancon this year are the fan interactions. We all wish we’re the girl that got close to Nam Joo and re-enacted a scene from Weightlifting Fairy. What wouldn’t we give to be held by Nam Joo like that? And if anyone’s curious, the whole arena swooned and we swear Dara did too.

This is one of the biggest and wildest Penshoppe Fancon there is. Dara and Nam Joo give their 100 percent, but they admit that it is the fans that fuel them to go on.

Aww, did you hear that? This is Joo Hyuk’s most memorable moment in the Philippines! ? #PenshoppeFanCon #DaraAndJooHyukforPenshoppe

People can say what they want about fans. Sometimes they can be a bit too much or plain toxic. But real fans, loyal fans, fuel the artists that we see today. They are the salt of the Earth. Highkey, idols know the power of their fanbase. The fans at Penshoppe’s Fancon proved this to everyone in full blast. To any doubters out there, they can take that to their next critique.

Read more: A year in Hallyu: Looking back at the best in 2017 K-pop culture

Did you feel a huge wave of FOMO washing over just now? If you did, then perfect. Whether you went armed with glowsticks or did #teambahay this year, what was your highlight of this year’s Fan Con? @ us @scoutmagph.