Days may have passed after APCC, but a lot of people are still having that post-con depression. The biggest one who’s having it is surprisingly the Internet. What’s causing it? None other than our local cosplayers and fans’ organizing the Boku No Hero (My Hero Academia) fan meet.

The famous anime that started from the Weekly Shonen Jump manga has won people’s hearts around the world. It’s nominated as the Best Anime Series in IGN for two consecutive years already. What started as a small project by a handful of anime fans turned into something that broke the Internet. The local gathering is still getting upvotes on Reddit. The fan gathering is still trending on both the My Hero Academia and the cosplay subreddit. They had professional Italian cosplayer Leon Chiro as All Might and Filipino-American cosplayer Canvas Cosplay as Eraserhead. With great local cosplayers to inviting two huge names in the cosplaying scene, they’ve organized a gathering that was beyond anyone’s wildest dreams.

Read more: 5 highlights of this year’s APCC that will induce intense FOMO

Curious on how these local fans got the Internet screaming “Plus ultra!” still? We sat down with one of the local fanboys that started it all. We asked local cosplayer and member of Fightsaber Philippines Cholo Tolentino (Deku cosplayer) on how they pulled off a fan meet up that accidentally blew up on a global scale.

When did the idea to do the meetup start?

The idea began after an earlier pop culture convention (ToyCon) ended. My girlfriend, Reg Velez (Uravity cosplayer), and I were resting on the side. We’re talking about how fun it would be if it wasn’t just the two of us going around in full BNHA hero suits. As if on cue, a good friend of ours, Sean Price (Ingenium cosplayer), passed by to say hello. And we both shouted in unison “Sean, please be our Iida!” From there, we decided to make a group and started inviting some of our friends.

We ended up with a core team. This included Zack Tolosa (Todoroki), Roxanne Kho (Momo), and Elijah Tolosa (Tokoyami cosplayer). I then posted a thread on my wall about our lineup and interested cosplayers started pouring in! In no time, we had over 40 people involved. What really hyped everyone up was the fact that both Canvas Cosplay and Leon Chiro acknowledged the budding gathering on Instagram. 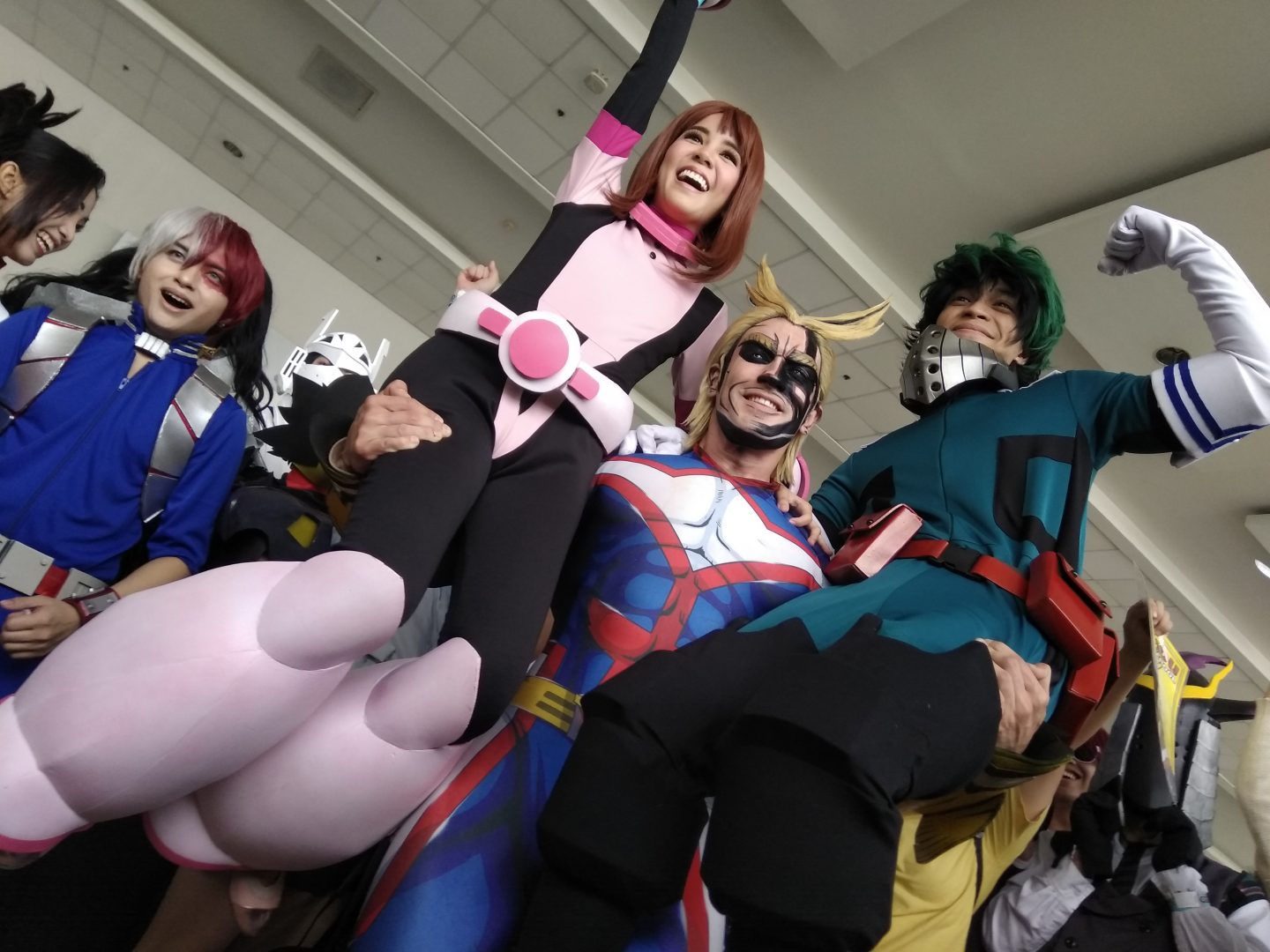 For a local anime fan gathering, this could make local con history.

What drove you to spearhead it and make it into a reality?

What really motivated me to lead this was how quickly the passion for the gathering grew. It went from being a couple cosplay to a small barkada thing to a big BNHA family gathering. Everyone was counting on each other and I wanted to do what I could to make the ambitious gathering a reality. Leon Chiro mentioned he decided to change his cosplay lineup because of the gathering. And Canvas Cosplay commenting “Aizawa will be there!” on my thread. Right there and then, I knew there was no turning back. For a local anime fan gathering, this could make local con history.

What does Boku No Hero Academia mean for you?

BNHA means a lot to me. Growing up, I always felt like an underdog. High school was rough on me and so was college. Watching the show, I could really see myself in Deku. How the hard times really molded him little by little into the individual he turned out to be. The show reminded me that the best way for me to do something is in my own way. That I should play to my strengths and never let what I lack hinder me from what I want to do. And now, the show means even more to me. The family that Class A is really reminds me of the family we were in the gathering.

What were your worries during planning the meetup?

Another worry was if our special guests would really be able to make it and join us upstairs. The gathering happened outside of the halls of APCC 2018. It would honestly be out of the way for them to leave their booths to join us. But there really was no other area to hold such a big gathering.

The day of the convention came and the very first person Reg and I saw after entering the con was Canvas Cosplay! He immediately recognized us and expressed his excitement about the gathering. He even mentioned the convention organizers knew about it and said it was okay for him to join us! Later on the same day, Reg, Sean, and I dropped by Leon’s booth to say hi and he recognized us as well! He also expressed excitement and asked for the time of the gathering. After telling him that it would be at 3:00 pm, he promised us he would be there for 30 minutes and had it written on his itinerary. He didn’t stay for 30 minutes. They both stayed for nearly an entire hour.

How did it feel for the meetup day finally come?

The cosplayers were extremely cooperative which made blocking everything that much easier. It was truly a team effort. And right when we got the blocking down, the group started chanting “Aizawa! Aizawa!” as Canvas cosplay went up the escalator to join us. Everyone wanted to talk to him but being as professional as they were, they knew they could save it for after the group photos. Then everyone turned to the escalator once more as the chants started growing “All Might, All Might, ALL MIGHT, ALL MIGHT!” just like that iconic scene from the anime. Leon Chiro bolted to us and everyone lost it! That’s when I knew that everything planned out for the gathering was a success. He led us in the “PLUS ULTRA!” shout and even recorded a video for Funimation Japan! After the shoot, the special guests stayed around to hang out. Leon even called me and Reg to him and he lifted us up on his shoulders effortlessly like the All Might he is! Like I said, surreal. 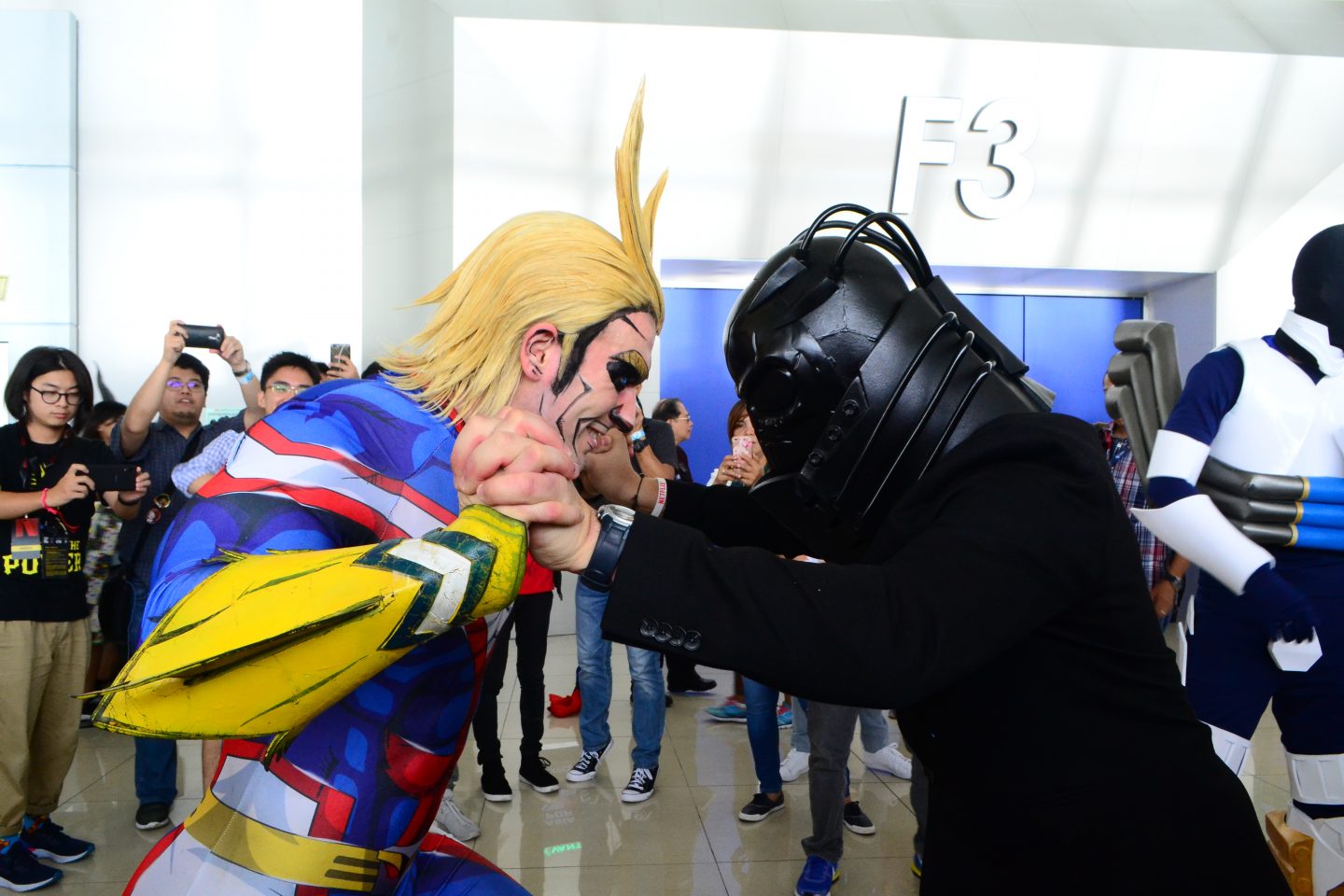 The people who joined the gathering were some of the most friendly, caring, cooperative and professional cosplayers I have met in my entire life regardless of whether they were dressed up as a hero or a villain.

What makes the anime fandom unique for you?

The fans of BNHA are so passionate. I believe all of the dozens of heroes and villains have cosplayers that want to suit up as them, regardless of how difficult the costume, how obscure the character or how weird the quirk. The show really shows lots of good values and incredible character building. This really shows in BNHA’s fans. The people who joined the gathering were some of the most friendly, caring, cooperative and professional cosplayers I have met in my entire life regardless of whether they were dressed up as a hero or a villain.

Did you think the meet up was going to be a success?

Honestly, despite all the worrying, I truly believed from the start that it was going to be a success. The core team was incredible. The planning was detailed. The marketing for the gathering was effective. Everything went according to plan. I had complete trust in everyone who was a part of the gathering. Now that it’s over, we’re already looking at what we can do next as a group. Trust me, this won’t be the last time you hear from BNHA MNL!

SHARESad news, Lana fans: A spoken word album from the queen herself will...