SCOUT General Public will be our fourth-anniversary celebration. This year, we attempt to capture the spirit of the D.I.Y culture that exist in the fringes of our usual scope. With performances from Meh Shua, Pure Mind Quiet Heart, Rusty Machines, Samba School Imperatriz Filipinense, IV of Spades, ABRA, CRWN, Bawal Clan, and Careless Music Manila filling our sick lineup.

What to expect? Street art, arcade classics, local clothing brands, and overflowing food and drinks for everyone.

How did SCOUT get here? Let’s take a trip down memory lane as we get all nostalgic. This is a brief history of SCOUT parties.

“The ’90s made a big comeback during the Scout Magazine launch, Scout Valley High, as a sea of plaid, goth makeup and backward baseball caps flooded through the gates of Samsung Hall at SM Aura last Saturday.” — SCOUT Valley High photo album description The ‘90s are all the rage now. With streetwear having a comeback and a reboot of classic shows, we can all brag that we lowkey kind of pulled the ‘90s revival off first. The title of our launch was an homage to the classic YA novel Sweet Valley High. Our attire? Nine-tease da bomb!

This marked the launch of SCOUT to the public. It was a basement style party with free pizza, beer, and an arcade. Just like your favorite ‘90s sitcom, we’re nostalgic but forward. We knew the curse of being young and why it needed be celebrated altogether. It gave birth to the SCOUT you all know today. 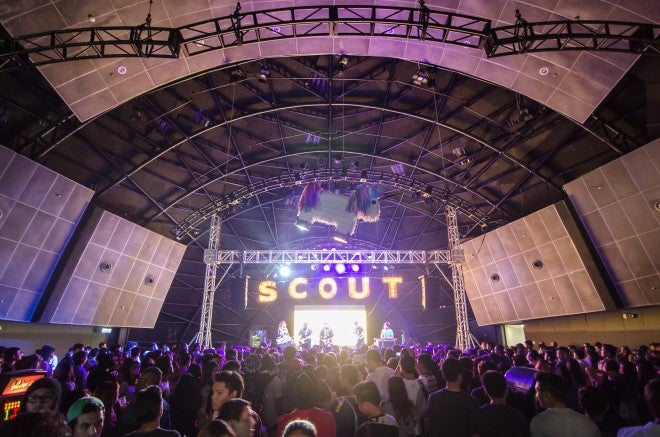 The first anniversary of the publication. Again, we went to SM Aura for three B’s —beers, bands, and backlight. Imagine our launch where the sequel is bigger than ever. There was a bedroom where you can read old SCOUT issues. There were tons of arcade games, and did we mention a damn good line up?

We curated up and coming musical acts that are now household names. That had always been the SCOUT way. Musicians Rabble Duke, Chocolate Grass, Ang Bandang Shirley, and many more acts played through the night. One of the highlights became our limited merch release. It was a transparent bag asking: “Where have all the kids gone?” The simple answer was they were probably at our place.

“Summer camps—the ones that pluck you out of your comfort zone and into a vast, unfamiliar, expanse—aren’t familiar to everyone, but to everyone who has been part of one, you would know the feeling you get when the event has transpired and you’re on your way home.” —SCOUT TEAM, “Our Favorite Moments From Scout Summer Camp”

Was it too early to say we went back to our roots just to make a pun happen? It probably was. As the title of our second anniversary implied, the theme for it was all about embodying the publication name. That night was when everyone embodied their forgotten girl/boy scout history back in grade school. Of course, but with a twist, since we’re all about that.

If anyone remembers the Nickelodeon classic Salute Your Shorts, that was the exact vibe that the celebration induced. Fake woods and fake greenery served as the backdrop for the realest people out there —our readers. Cheesy, but hey, they’re the real OGs. SCOUT literally wouldn’t last for four years without them.

“I couldn’t focus on taking pictures at that time masyado kasi akong nagsasaya noon. Hell, I even hurt myself. Rjay Ty’s set was so lit that I hurt myself! I was f—king bleeding, literally!” —Boris John Garcia, SCOUT Intern for 2018

Our launch might’ve been a ‘90s throwback, but on our third anniversary, we went one decade further. We brought back the neon and charm that the ‘80s can bring. It’s another reason to come late. What we brought to SM Aura’s Samsung Hall once again was a little bit of sun, a little bit of surf, and also a little bit of nostalgia for days we’ve never had.

Of course, there was beer pong and foosball. But the heart of it all was the music. It was a well-curated mix. That’s kind of the SCOUT guarantee. The genres varied ranging from Jensen and the Flips to Rjay Ty. It was a romp, to say the least. When hasn’t it been?

Now that you’re fuelled with hype and nostalgia, we hope to see you in our most ambitious SCOUT anniversary up-to-date. This time around we’re defying ourselves. The pastel-clad magazine you love to hate and vice versa is going beyond its magazine’s borders. Here’s to the new SCOUT and the old. See you all at General Public.

Buy your tickets now at all SM Tickets Outlets, at smtickets.com by typing the key word Scout General Public or call 470-2222.

Photo by The Visual Club

SHAREHello, burnout generation. We implore you to please put down the to-do list...

SHAREFormer senator Bongbong Marcos was rumored to have COVID-19 last Mar. 21. To...