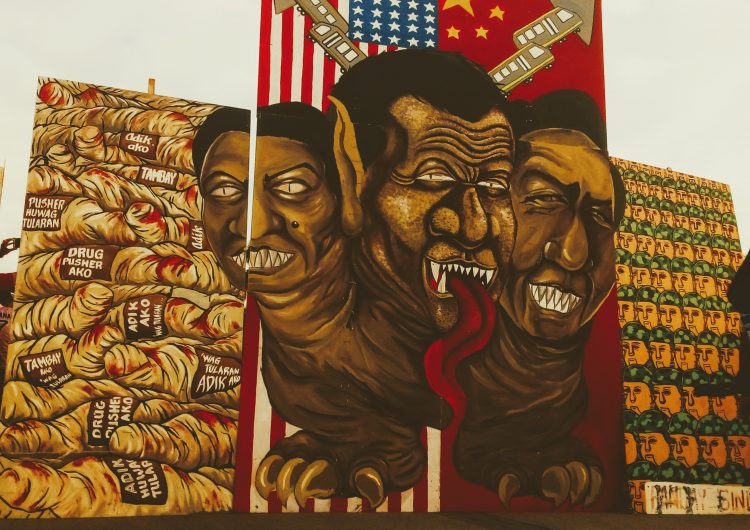 At this point, the president is clearly following the late dictator’s footsteps. 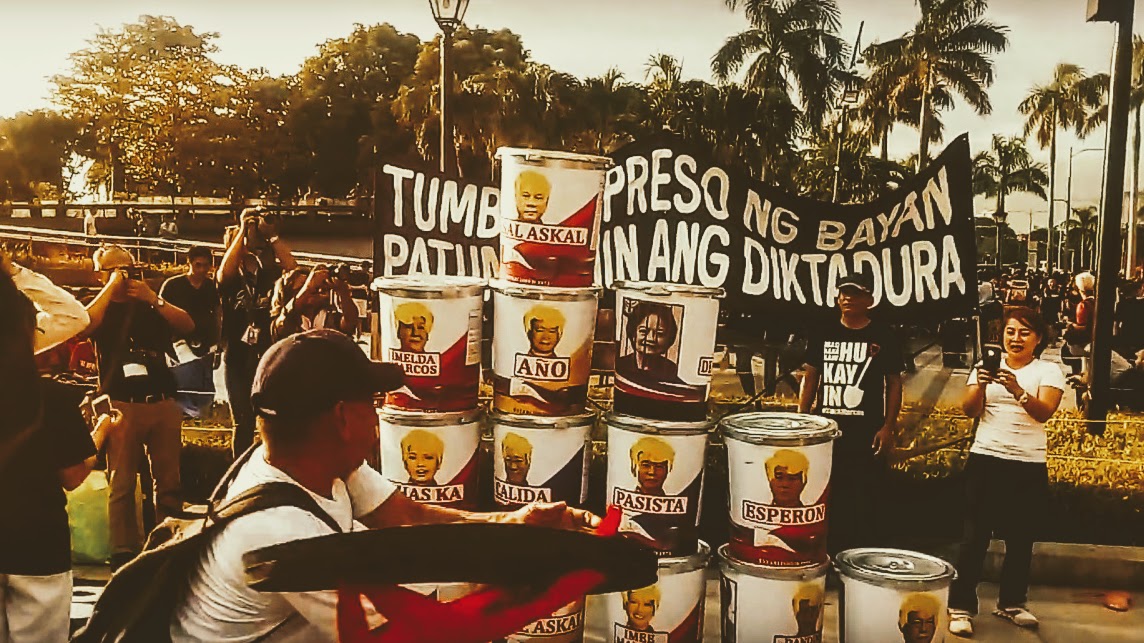 I grew up listening to my parents’ 70’s and 80’s records. I’ve spent so much time on them back then that I could easily tell if a song is from that era (or at least, patterned after that era). I admit, I‘ve also spent some time being embarrassed by saying I like old songs, but with pop culture shamelessly bringing back the sounds of the past—with Carly Rae Jepsen approximating 80’s synthpop or IV of Spades blatantly patterning themselves after 70’s disco bands—it’s safe to come out now and say that looking at the past and a good throwback won’t hurt.

It’s a weird phenomenon, to be honest: after all, we live in the fast-paced world of the internet where everything is in constant change and motion that it’s easy to simply forget and move on. But while trends come and go and return at one point or another, it’s a different matter altogether when we talk of history. History in itself demands remembering: we look on the past for us to relive victories and defeats, to rethink our perspectives on issues, and to reflect on the times when we went wrong, hoping that we won’t repeat them.

History in itself demands remembering: we look on the past for us to relive victories and defeats, to rethink our perspectives on issues, and to reflect on the times when we went wrong, hoping that we won’t repeat them.

For starters, it’s definitely hard to grasp the idea that we’re inching towards another dictatorship because it seems for the most of us that the idea of dictatorships is a thing of the past. After all, I’m still able to write this piece or that I can tweet about how big the president’s pores are, or that people can still march in the streets and burn effigies bearing his face. 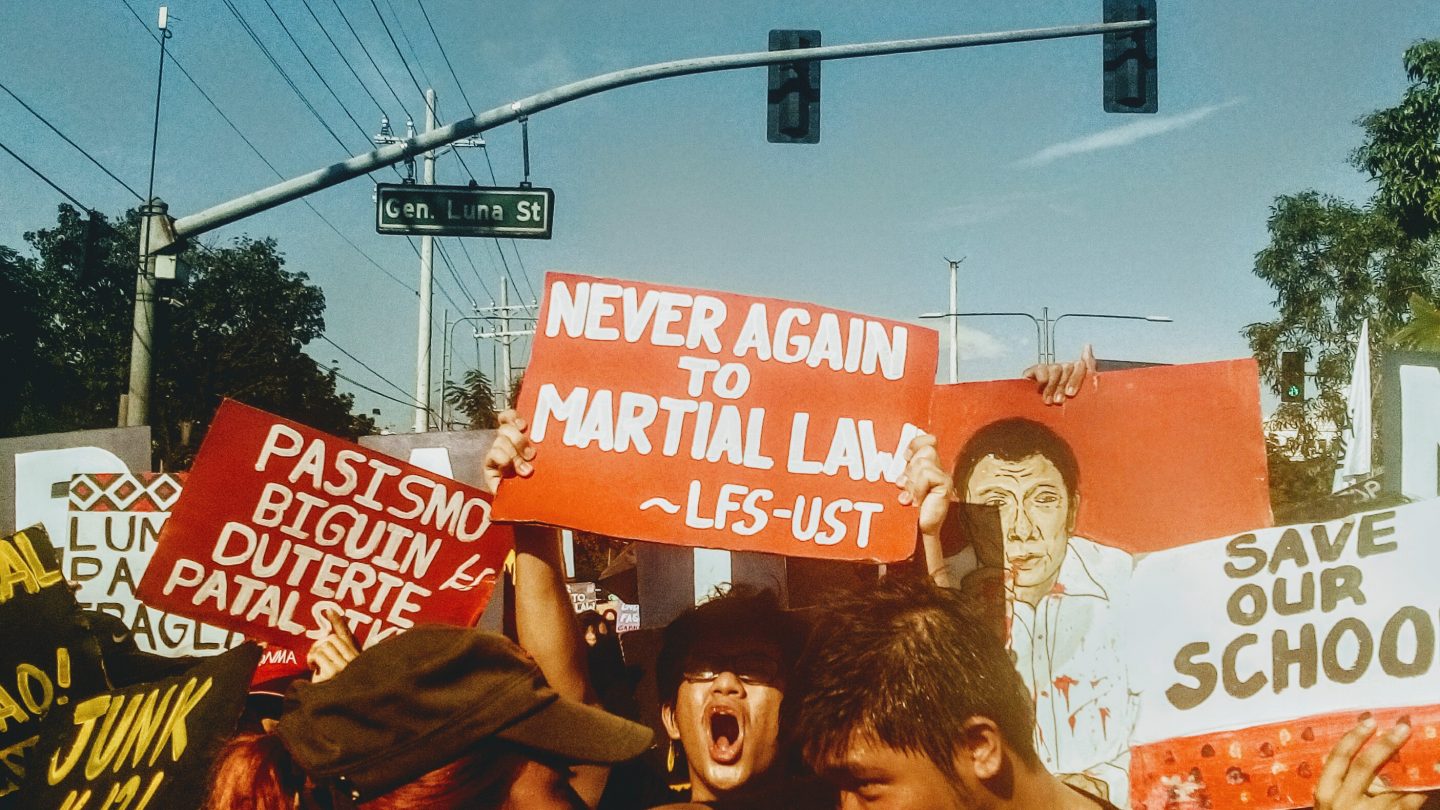 While I wasn’t thankfully born during the dark years of martial law under the late dictator Ferdinand Marcos—which saw rampant corruption, killings, arrests and torture of political opponents and forced disappearances of thousands of activists—last year’s mass protest commemorating the 45th anniversary of its declaration made one thing very clear to me and a lot of young activists that marched to Luneta: we’re indeed inching towards another dictatorship, almost similar (if not worse than) the one our country suffered under the Marcoses.

I’ve already heard the chant “Duterte, Marcos, walang pinag-iba! Parehong tuta! Diktador! Pasista!” in the protest last year, but the angry chant took on a deeper meaning last Friday at the United People’s Action, where thousands once again marched to Luneta to commemorate martial law and decry the looming dictatorship under Rodrigo Duterte. 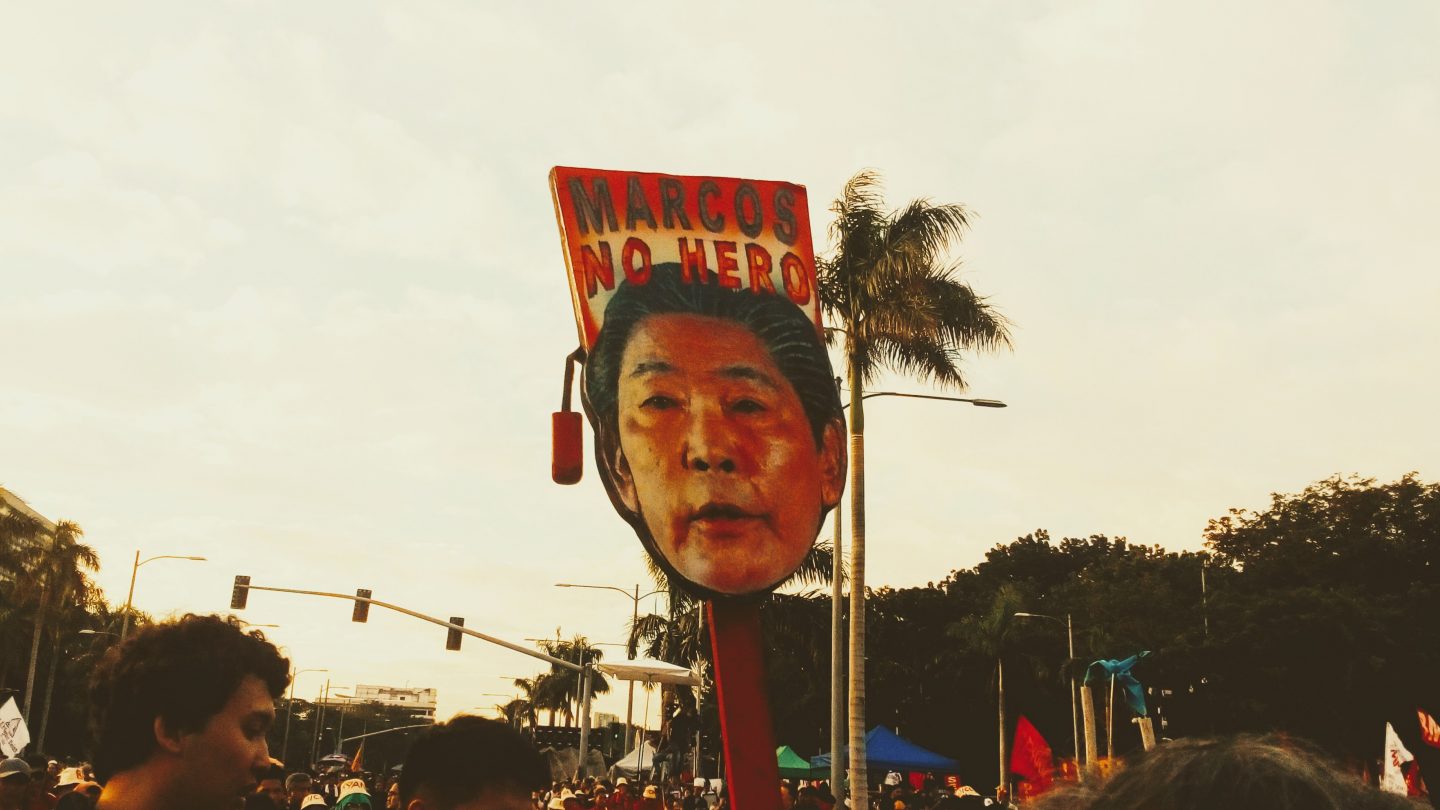 While the president is yet to ban an anime like Voltes V (whose theme song welcomed us as we arrived at Luneta), we have a Marcos fanboy for a president whose first three years in power saw the most politically turbulent years in Philippine history probably unseen since the 70’s and 80’s: history is being revised in real time by trolls and fake news as massive killings and rampant human rights violations continue under Duterte’s brutal drug war and dissent against his growing authoritarian rule is slowly being criminalized with his tirades against media outlets, trumped-up charges against and arrests of his political opponents in all branches of government, and the persistent threat of placing the entire country under martial law or a “revolutionary government” to squash alleged destabilization plots against his rule. For a Marcos fanboy, Duterte is doing a good job in following the late dictator’s footsteps, and it is becoming more and more apparent that he is paving the way for another dictatorship.

For a Marcos fanboy, Duterte is doing a good job in following the late dictator’s footsteps, and it is becoming more and more apparent that he is paving the way for another dictatorship.

Tyrannical regimes and dictators don’t come to power in one swoop, and Ferdinand Marcos did not become a dictator when he signed Proclamation No. 1081 four decades and six years ago. In 1968, four years before martial law was declared, the late Senator Ninoy Aquino was already warning that Marcos was turning the country into a “garrison state,” and for the then-student activists who joined the radical student protests of the First Quarter Storm of 1970, the violent dispersals and suppression of protests that erupted almost every day in schools and universities—which Marcos claimed to be “a revolt by local Maoist communists”—proved to be tell-tale signs of a rising tyrant that feared the people’s uprising. 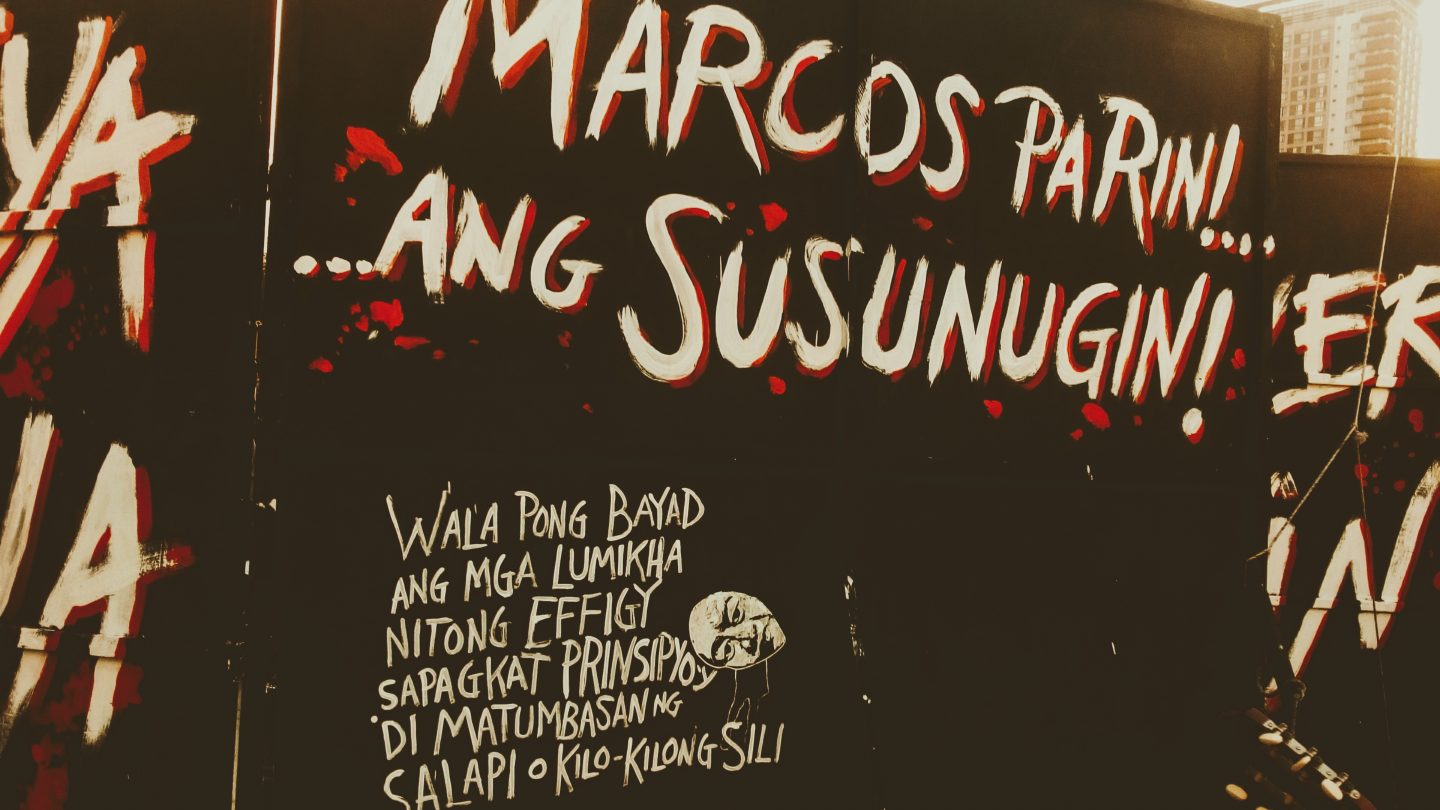 Marcos would pin the blame of the 1971 Plaza Miranda bombing—along with other bombing and bomb threats that rocked Manila that year as well as the staged assassination attempt of then-Defense Minister Juan Ponce Enrile (who just went into a tête-à-tête with the dictator’s son denying all martial law atrocities) the following year—on the communists and his political opponents. The military immediately swept into action as they closed newspapers, radio and TV stations, and arrested Marcos’s critics in the media, political opponents, and activists, accusing them all of being communists and subversives.

At this point, the parallels are way too uncanny. Notwithstanding his fixation on drugs and killings and disregard for human rights and checks and balances, Duterte has a seemingly obsessive fixation on squashing alleged destabilization plots against him, and like the true Marcos fanboy that he is, these plots against him were being led by—surprise!—the communists and their connivance with his political opponents. He even claimed that an assassination was underway for September 21 (which proved to be a baseless claim) that and a communist “Red October” uprising is in the works.

Notwithstanding his fixation on drugs and killings and disregard for human rights and checks and balances, Duterte has a seemingly obsessive fixation on squashing alleged destabilization plots against him, and like the true Marcos fanboy that he is, these plots against him were being led by—surprise!—the communists and their connivance with his political opponents.

While I can only speculate on who was behind the fake bomb threats on several schools days leading to the martial law protest (all of which were allegedly sent by communist guerrillas, which they have denied), the police’s intelligence claims that the protest in Luneta would be led by communists was not only absurd—the United People’s Action was in fact led by groups from various political, religious, and social backgrounds—nor was it just a desperate attempt to dissuade people from joining the protest: it was very telling of how the government is playing up the threat of a communist insurgency as if it was the 70’s all over again, perhaps to crack down activists and government critics. We’d know soon enough.

I joined other students in braving the rain to march from España to Luneta, but by noon, we were forced to stop along Morayta to wait for other students and let the rain pass. The bomb threats and class suspension that day didn’t threaten us, and heavy rain definitely wouldn’t stop us either.

As we sat along the sidewalk, we began to talk about how Duterte is already becoming a parallel of Marcos, and we asked ourselves if he even needed to declare martial law at all. We even wondered on what we would do if Duterte succeeds in declaring martial law. Where would we hide? What would happen to our families? Would we be able to make it out alive? I imagined how hard it must have been for many student activists to leave their families for fears of being arrested and tortured, or worse, killed. 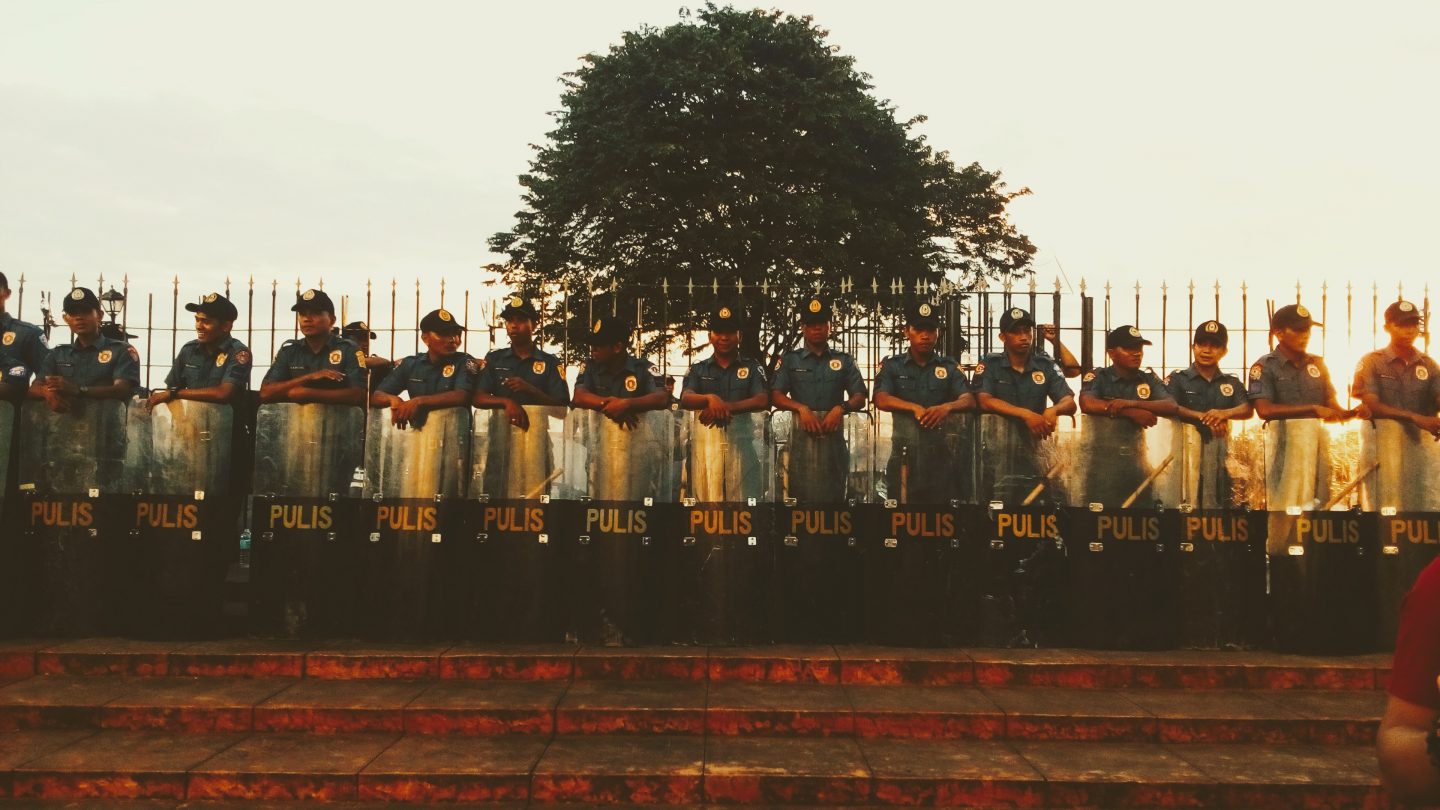 We only answered with smiles and nervous laughter. Being an activist in a time of a looming dictatorship could definitely feel like a death sentence, considering that killings are rampant, and we could very much end dead if we’re not careful.

But perhaps it was that very same fear that drove us to push through with the protest. Perhaps it was the unspeakable feeling of solidarity with landless farmers and contractual workers, Lumad students who can’t go to school because of martial in Mindanao, families left by those who were killed by the drug war, and the survivors of martial law who marched and chanted with us in demanding justice, land, jobs, education, in honoring those who fought and died before us, and in denouncing the rising tyrant in our midst.

As prices are surging with the tax reform law and high inflation rate and the poor are being plunged deeper into poverty, the people are growing angry, and many of them are already finding the courage to speak up and fight. It’s very tempting for us to simply stay at home and watch the protests from a distance, maybe even tweet a thread or two on why we should never let another dictatorship happen—but if history would tell us something, it’s that revolutions are not born from the internet’s echo chambers: revolutions are in the parliament of the streets, where people from all walks of life are united in saying “never again to martial law!”

it’s that revolutions are not born from the internet’s echo chambers: revolutions are in the parliament of the streets, where people from all walks of life are united in saying “never again to martial law!”

The youth aren’t afraid. We do not forget. We would never move on if the past is clearly making a comeback, and we would not stop marching in the streets, we would not stop resisting until we take back our democracy. Another dictator is not the throwback we asked for.

SHARESound the alarms: R&B queen August Wahh is back with a smooth new...