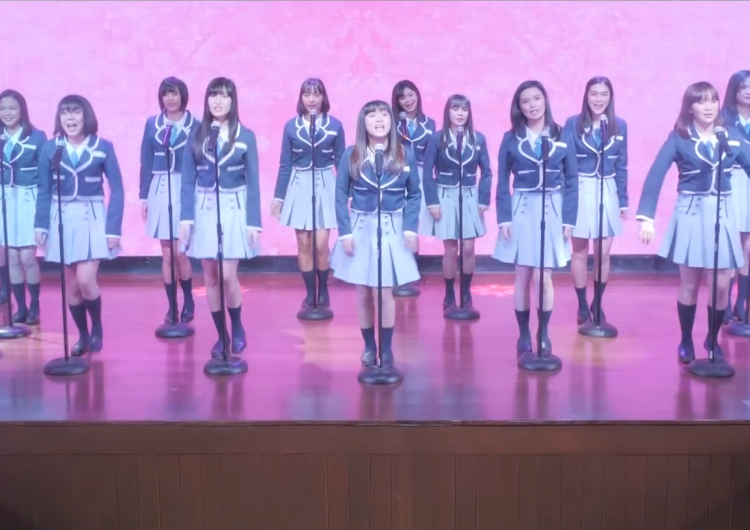 They can sing, dance, and act but aren’t exceptionally good at them. So if they’re not singers, dancers, or actors, what are they? They’re idols, supposedly.

Celebrities here in the Philippines are either: a. hot, b. related to another celebrity, c. from a reality show, or d. are really good at what they’re doing. Most celebrities aren’t trained to be celebrities. We’re not used to the idea. Sure, actors and singers go through workshops and all that. However, the idea of a person to be for the public is weird.

We look at celebrities and sometimes forget that they’re just like us; normal people living their lives. Though through fandoms, street teams, and fan clubs, there is a sense of entitlement and ownership over an artist. Like they are ours. Like they work for us. Idol culture takes that idea and blows it up like crazy.

Idol Culture in a nutshell

In Japanese pop culture, idols who are average-looking are manufactured to become role models for young people. They are trained in singing, dancing, and acting; afterwards, marketed to be admired for their cuteness. Idols are made for the people. This entails being forbidden to have relationships while being inside the group for the belief that it will ruin the fantasies of the fans. Kind of scary, and most probably breaks the labor code.

They cannot be of higher status than the general public, for the public must relate to them. Their songs doesn’t require much vocal prowess. Their dance moves, on the other hand, must be easy and repetitive so everyone can dance to their songs. Hence, giving the idea that the idols are just one of us, only with cameras pointed at them.

Now, this isn’t really different from when the South Korean pop culture (K-pop) came here. It’s a weird idea because it’s new. Let’s be honest, some of us hated K-pop when it first came to the Philippines, but now? It’s on the top of our charts. Trumping both local and American music.

In one sentence, MNL48 (read as /em-en-el-forty-eight/) is an all-girl sing-and-dance group. That’s it. The group is the newest sister-group or the Filipino version of AKB48 from Japan. You’re probably thinking, “sister-group?” Yes, sister-group under the 48G Family. AKB48 has franchise across Japan and all over the world.

It’s quite different from the elite and bigger than life ideology we put unto celebrities.

The first one though, AKB48, is the big(gest) sister of it all. AKB48 was founded in 2005 by Yasushi Akimoto, a renowned producer of top Japanese idol groups. He has this concept of “idols you can meet.” See them almost every day, shake their hands (handshakes, literally), get their photos, have them sign it, etc. It’s quite different from the elite and bigger than life ideology we put unto celebrities.

AKB48 is the first pop group in Japan to have its own theater where performances are held daily. The idea was to give fans the ability to watch their favorite groups perform live on regular basis. Crazy, we know.

As of February 2016, there are 554 members in the 48G Family. Yasushi Akimoto is expanding the AKB48 concept to several sister groups.

Sister groups in Japan include SKE48 in Nagoya, NMB48 in Osaka, HKT48 in Hakata, and NGT48 in Niigata. Sister groups abroad start with JKT48 in Jakarta, Indonesia. Announcements of TPE48 in Taipei, Taiwan; BNK48 in Bangkok, Thailand; and of course, MNL48 in Manila follow.

The first ever idol group in the Philippines, MNL48

After a nationwide registration and audition tour that set the search for the 48 girls who will be part of the first ever Filipino idol group revealed in “It’s Showtime,” they have finally debuted. MNL48 is here.

How will you get to know them all? Easy. They developed two systems to introduce the girls. You don’t have to be a hardcore fan of the entire 48. It can be by 16s!

First one, subgroups. There are three under MNL48: Team M. N. L. (MII, NIV, L); plus Kenkyuusei or understudies. When a member from the main 48 leaves, a Kenkyuusei gets promoted. These subgroups can release their own stuff and perform solo. Each subgroup also has their own front liner called the group leader. She may or may not be in the Senbatsu group (more on this later). Most of the times, though, they are.

From the Senbatsu, 7 girls will get the Kami 7 slots which will become the frontliners of the performances. Not to mention the opportunity to get into trainings and chances to perform worldwide. From Kami 7, the winner (as the Center Girl) of the general election will be the face of MNL48 worldwide and the overall leader of MNL48.

If that piqued your curiosity and want to check them out, they debuted this year with “Aitakatta – Gusto Makita”. A second single was also released just last Saturday, entitled “Talulot ng Sakura.”

Their lyrics are just songs by AKB48 translated to Filipino. Franchise groups usually start like that, before branching out to their own original songs. The sound is very J-pop, and you have to expect multiple voices you can’t distinguish all throughout the song.

MNL48 First Generation will be performing at their very own MNL48 Theater (located at Eton Centris), and will have their music recorded and released on a regular basis as well. These girls will do more training under the company that honed AKB48. On top of that, they will do occasional endorsements from clothing lines that are exported from Japan.

The idea of MNL48, or any groups under the 48G family is to embody a role model to the younger generation.

The idea of MNL48, or any groups under the 48G family is to embody a role model to the younger generation. They’re not allowed to have boyfriends to focus on finding themselves and enjoying their youth. They go through A LOT of training and the ranking system is there to show us patience, hard work, and perseverance. The image they’re trying to portray is a mixture of Filipino and Japanese culture and practices wrapped in shiny costumes and teeny bopper tunes.

MNL48 wants to take a snapshot of what it’s like being young. That’s also why they have an age cap on their trainees (it’s 21 years old, by the way). They sing about graduation day (“Talulot ng Sakura”), about wanting to spend time with someone regardless of the challenges (“Aitakatta”), and even about how a woman loves (“Umiindak na Saya”).

Idol groups today are not new to us, given that K-pop is already mainstream here. But manufactured idols or starlets that are from our own? Unusual. However, that doesn’t mean it will be rejected. We still have a long way to go as per idol culture, but before sending hate, try to give them a listen.

Makoto Shinkai is working mad hard for his new project

SHAREIs it the “Weathering With You” follow-up we’ve been waiting for? Let’s see. ...

SHAREI don’t know about you, but a good read always seems to make...