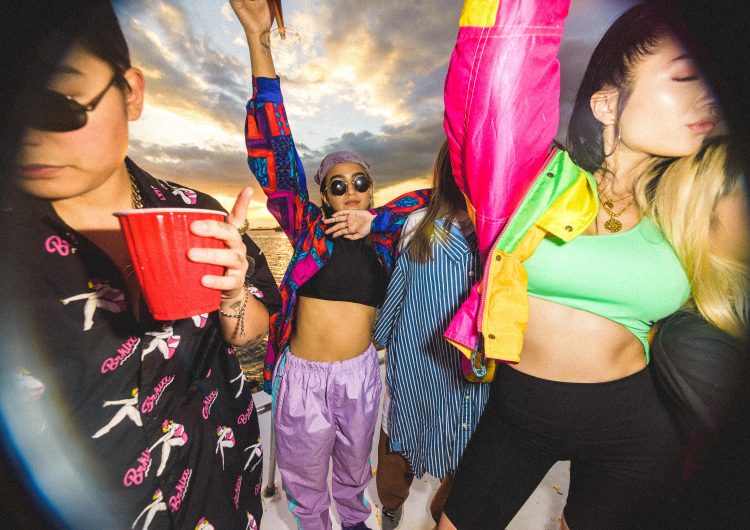 Recently, I’ve put on some weight. It shows when I wiggle my way through my pair of selvedge pants, or when I’ve been opting to buy shirts a size larger than what I usually get. I lost the bare definition I used to have in my chin. There are two Venn diagrams in my wardrobe: clothes I feel comfortable with, and clothes that don’t make me look like a total wreck. The intersection between those two has become pretty small.

So the morning of the day that Converse would hold a party in a yacht to promote the release of the Dark Stars, I was freaking out. It’s not that it’s a Converse event, but that it’s a party in a fucking yacht. I don’t even know the full details. Would the boat just be docked the whole time? How big is the yacht? Where would we going, if ever? International waters?

For a person that’s never stepped foot on a yacht, let alone attend a private party set in one, I had no idea what to wear. It’s a party. In a yacht. This is stuff music videos are made of.

So I Googled. One Reddit thread lead me to a screenshot of a G-Eazy set photo, and a meme. Thanks for nothing, r/streetwear. With a lack of options, I set out wearing one of my many dad caps, a thrifted denim jacket, a pair of chinos, a patterned short-sleeved button down I borrowed from a friend, and my One Stars, which was my idea of dressing for the occasion. Did I mention that this was a party on a yacht?

I can tell who else in this Starbucks we’re in is going to this yacht party. I see tiny sunglasses. I see loud patterned shirts. I see air pods. And I feel a different kind of energy. . .

So off I went with my teammate Kyle from our sales department, who was better dressed because he picked up the memo. I forgot to mention that the invite read that we were to wear “streetwear” for the occasion. Oh well. I see my photographer friend Ed and he tells me I dress like Tyler, the Creator. Okay? Okay! While we were waiting, I can tell who else in this Starbucks we’re in is going to this yacht party. I see tiny sunglasses. I see loud patterned shirts. I see air pods. And I feel a different kind of energy, the type that you can expect from Converse’s roster of ambassadors: the AntiHeroes and the Converse X gang, both spawns of their Rated One Star campaign. 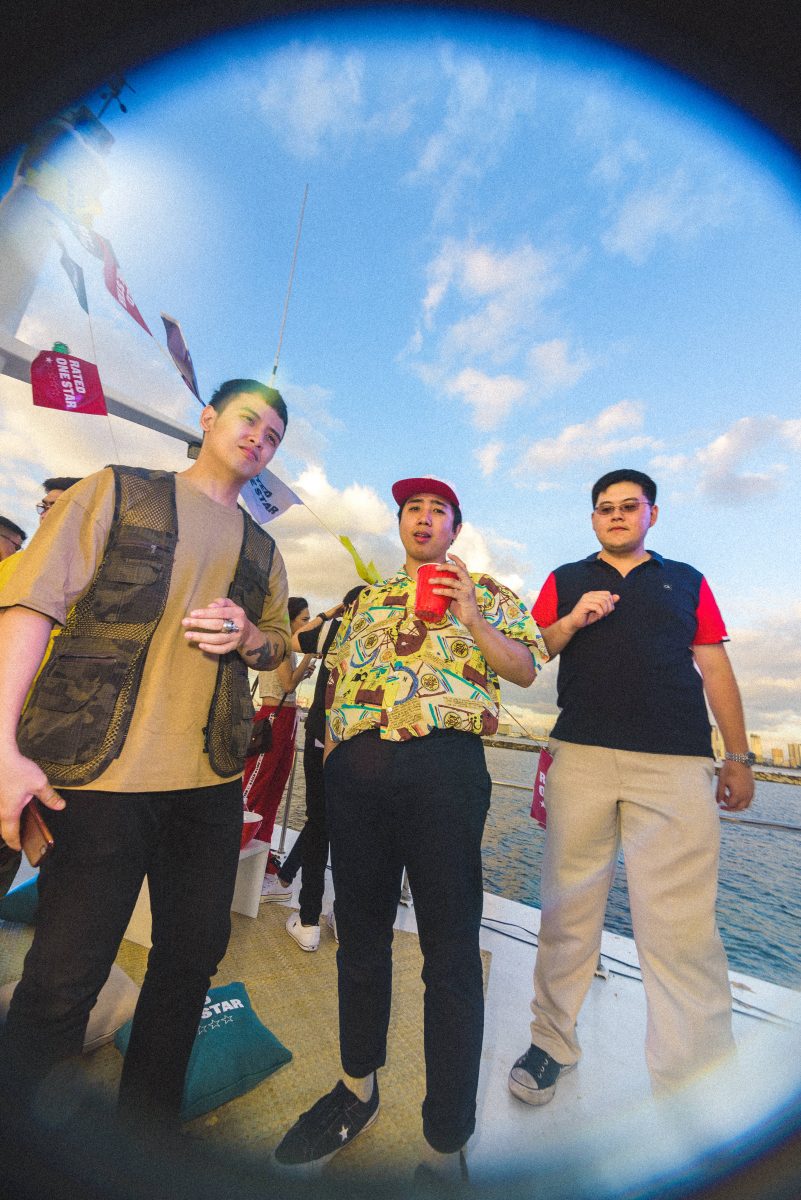 Kyle, me, and a newfound friend

We get a glimpse of the yacht running across the horizon as we’re looking outward, into the glistening water, and booming EDM comes on. We walk to a little dock-ish platform, and ride a dingy boat with the Rated One Star logo on it. The booming music came closer. As we step on the boat, I see the spread: slices of brie and gouda paired with charcuterie, bottle of Bombay Sapphire and Black Label, pretzels, and biscuits, and chicken lollipops. There was a pair of Dark Stars on cake. Like, the entire top layer of the whole cake. The music gets louder. 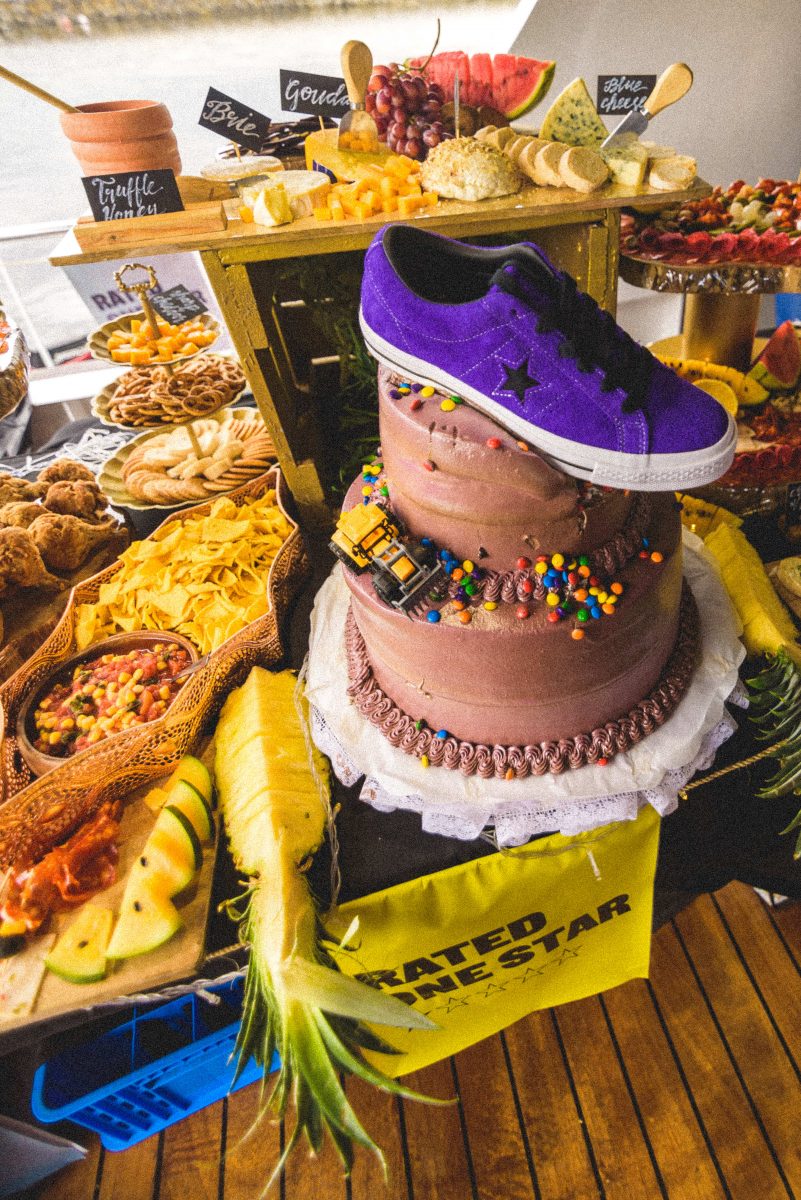 Just look at this thing.

I go in, and there’s AC, champagne glasses, and throw pillows with the Rated One Star branding on it. There’s a TV turned on with graphics I only see during a specific activity: karaoke.

Kyle and I go up to the deck, and there are more throw pillows and banigs and booming EDM and more alcohol. And another pair of Dark Stars encased in Jello. I make a joke related to The Office while taking a picture of it. Right: I am here for media coverage; time to do some Instagram stories. The crowd gathers while the marketing manager picks up the mic. He thanks everyone who are here to attend, and directs the ambassadors to pose somewhere in the deck. Smart: the party was also a photo shoot for the campaign, and with us there to see it, it was content all around. Sweet, sweet, content. 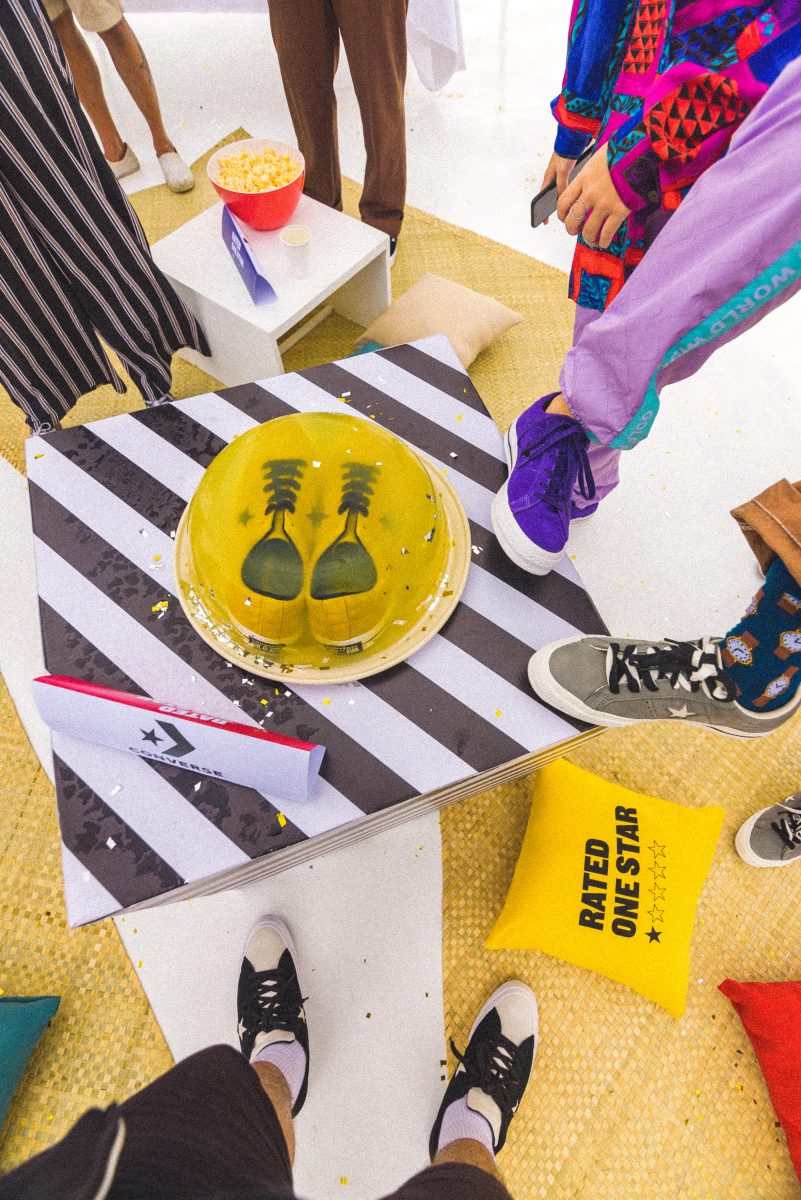 Between the media, the Converse team, the Converse ambassadors, the event crew, and the crew of the yacht, I’d say we’re around 40 or so people in here. They popped two bottles of champagne—pop!—and my shirt and cap are drenched. 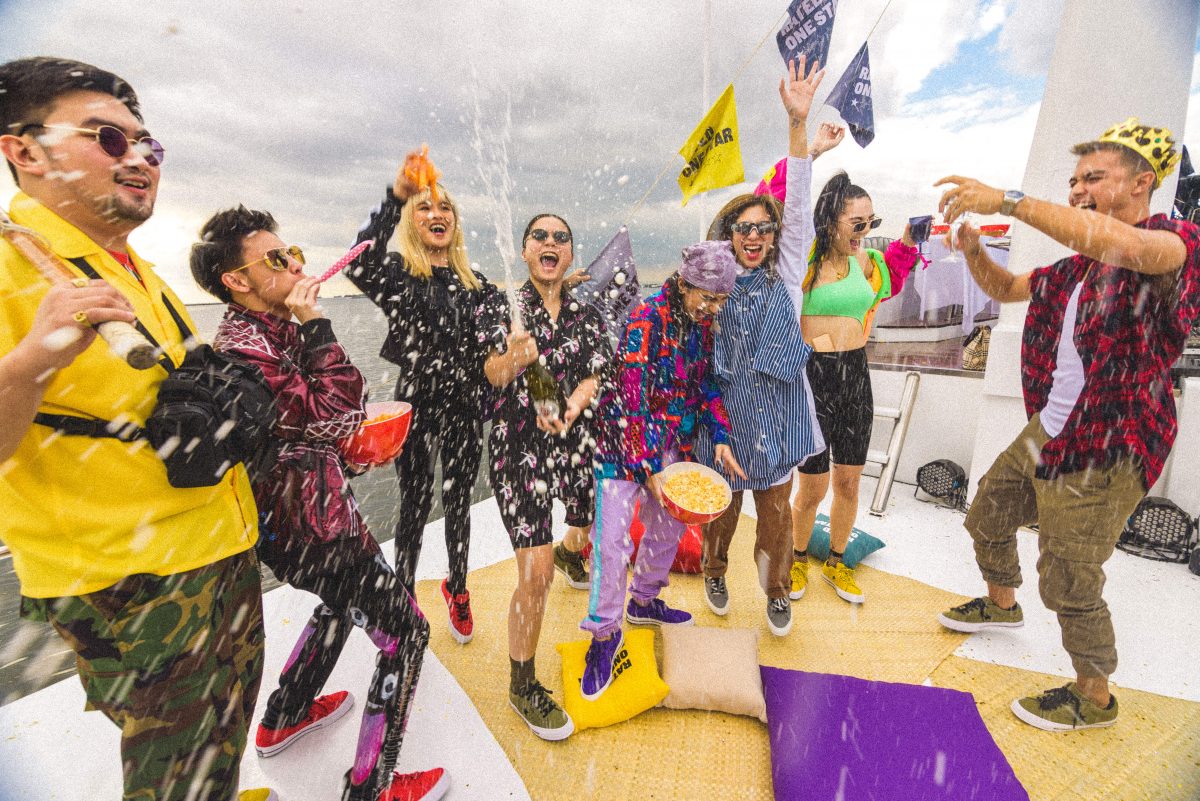 The champagne went straight for my cap.

I ask someone from the Converse staff about how long we’re staying here, and she says we’re here until past sunset, around 7:00 in the afternoon. Oh right. The idea was to catch the sunset. I can picture it: A luxury yacht going full speed towards the sun the minute it would set, so the sunset would be forever and the party would go on and on and on. Like an eternal golden hour. I can imagine someone getting tossed off the yacht and someone would throw a lifesaver and we would all have a laugh. I can imagine it was me. I’d be down.

I can picture it: a luxury yacht going full speed towards the sun the minute it would set, so the sunset would be forever and the party would go on and on and on. Like an eternal golden hour.

Or was I? The party fell into the middle of the tail-end of an important week in work. I had deadlines to chase, stories to write, and meetings to arrange. I had the rest of my team hauling ass while I sat here clinking a champagne glass. I felt bad for having fun, but I also wanted to escape, so the rest of the afternoon was an awkward push and pull between these two desires.

The music played on. Loudly. We were really cruising around like royalty without a care in the world. We drank, and ate, and drank some more. More IG stories. More drinking. I switched between the rooms of the yacht to find some comfort, but almost everywhere I went had this concentrated energy. I was left hanging in the port side of the yacht with some of the event crew, who were basking in the moment. We passed by Mall of Asia, and then Solaire. Seeing the coast of Manila bay this way felt…weird.

Personally, I hold the Rated One Star campaign close because it felt like it came straight out of my head. I was part of a press tour involving Converse’s pop-up in London last year, and I could easily it was my highlight of the year. Converse’s collaborations with Scout under the #RatedOneStar campaign were more than ideal: We featured people with style, with substance, and with a distinct following in their circles. We played with the rules of social engagement.

I look at the crowd in my haze and I think: what are we doing here? I hear the Mafia City theme song. What’s going on? The song goes on for a solid five minutes. I unironically love the track now.

The Dark Star collection, according to Converse, was inspired by “’90s skate crews coloring in the white stars of their classic One Stars black with a marker.” I looked at everyone’s Dark Stars. I looked at the water. Suede and water don’t mix well. I look at the crowd in my haze and I think: What are we doing here? I hear the Mafia City theme song. What’s going on? The song goes on for a solid five minutes. I unironically love the track now. 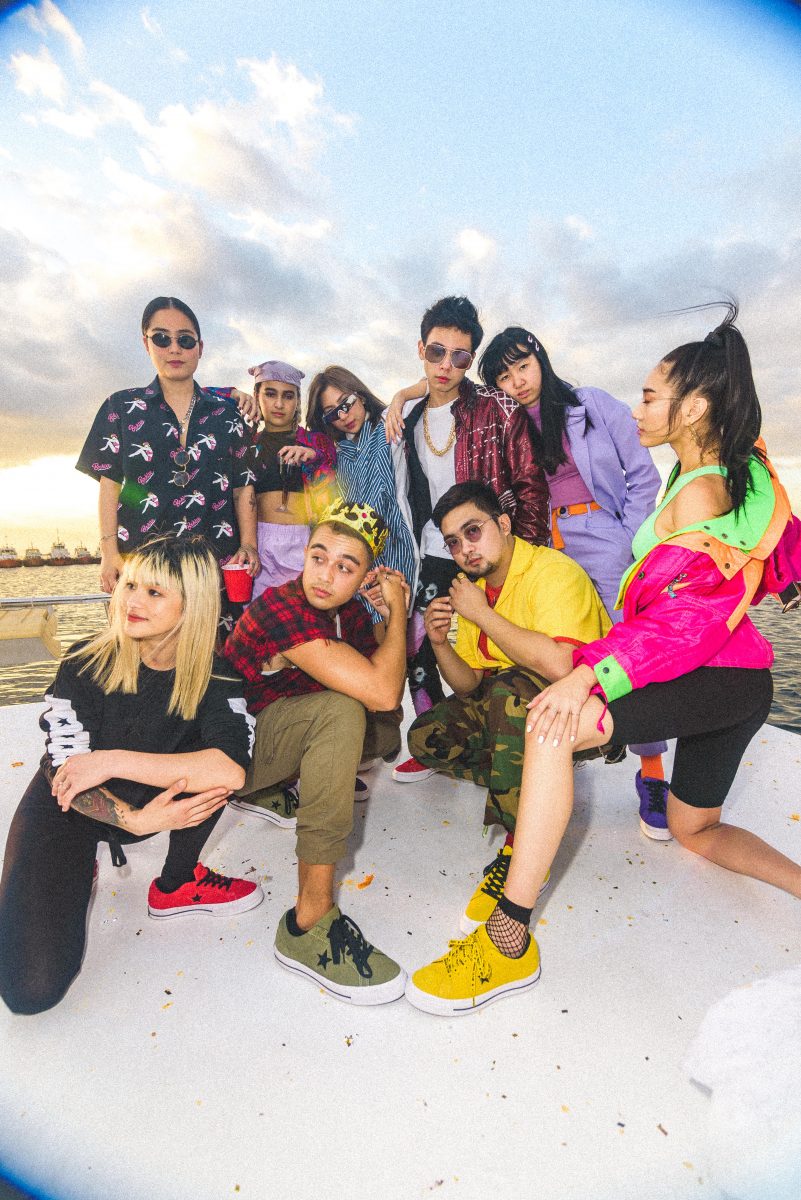 The Converse ambassadors: AntiHeroes and members of the Converse X collective. Guess which one’s which.

But also: Why do I need to read on it too much? My shoulders were tense. Can’t I just enjoy? Am I reading on this too much? Am I losing touch with what the kids are into these days? We were called on again to the deck because the sun was about to set. The yacht changed course. My phone was up. Another bottle of champagne was in one of the ambassadors’ hands. We were ready.

The sun glowed a bright orange-red, then red-orange, then faint red, then receded down into the ocean. I find myself in the karaoke room. They were singing a Queen song. I sang along. I didn’t feel that we were near the harbor until I heard that people were joining the first ride back via the same small dingy boat earlier. Kyle and I were the last to go back. I look back at the boat: the darkness took everything from the luxury yacht and made it look overwhelmingly empty. Maybe this whole thing was an exercise in seizing the moment, of not caring about the consequences and just letting go. Maybe I am missing something. Everyone else looked like they enjoyed.

Maybe this is the Rated One Star life.

SHAREThe day I am to interview Ruru Madrid is the day after the...