“Why do we need to label things? Why try to be in a box when in fact, there isn’t even a box to begin with?” makeup artist Zidjian Paul Floro asks.

Zidjian is one of the many young queer artists today who embrace their gender identity and refuse to conform, and he couldn’t be any more right. Why do we have to stay in a box? What’s wrong with creating something entirely new altogether? 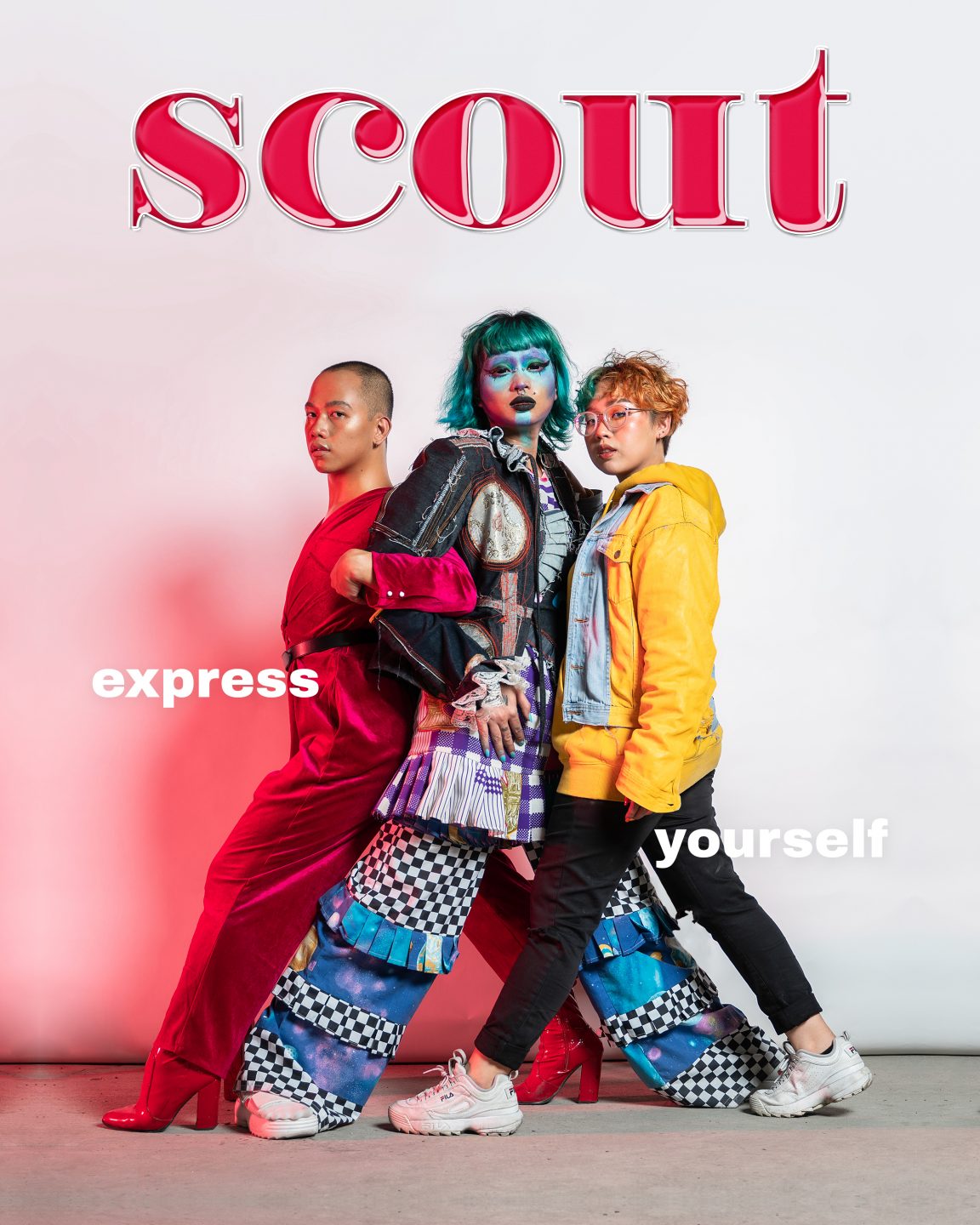 It’s hard to be young and even harder to be queer in the Philippines. Although the Philippines is dubbed one of the most LGBTQ-friendly Asian countries, what may come off as acceptance is, in reality, just tolerance. Young LGBTQ+ Filipinos have a heightened risk of “adverse physical and mental health outcomes, including depression, anxiety, substance use and suicide,” according to the Human Rights Watch. Queer people are prominent figures in comedy and entertainment, but their rights are easily neglected. We are far from the LGBTQ+ friendly nation the statistics imply.

While the fight for gay rights has yet to move forward in the Senate, the LGBTQ+ community will not back down without a fight. And in this fight, creativity is their weapon. Queer artists like Zidjian, Anton Belardo and Ida Siosoco are using their craft and unique style to subvert labels and gender normative ideals.

Androgynous, bright and unafraid. Proud to be who they are. This may be weird for others, but this is the future of Filipino queer culture. 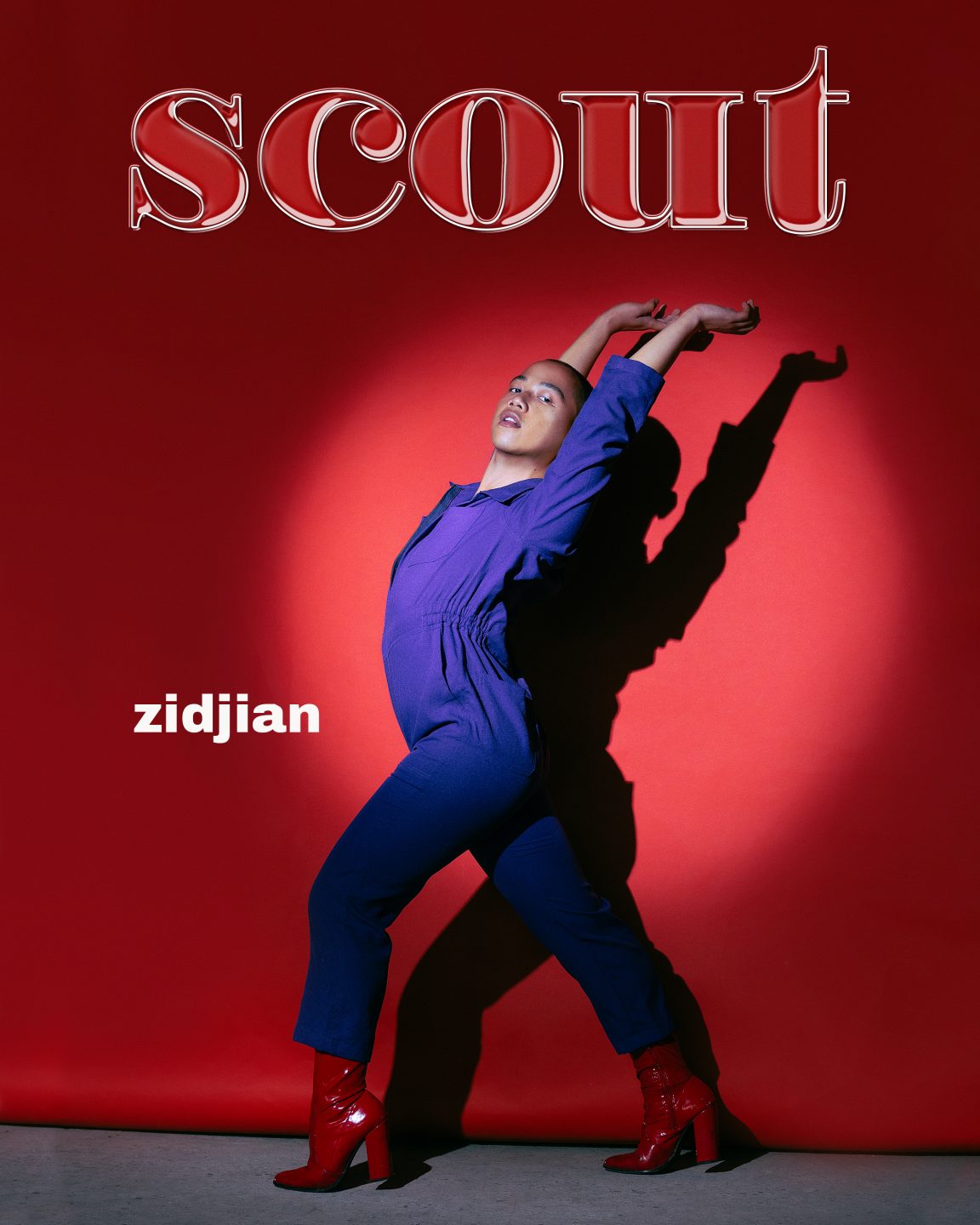 Zidjian is a well-known makeup artist. By day, he serves neatly brushed brows and an overall glow. By night, he transforms into his fierce drag persona Bambi, with straight hair a la Naomi Campbell and full-on mug that’s beat for the gods. He is empowered by Azealia Banks, strippers and other strong, confident women. Short, brown and proud, Zidjian exudes an air of confidence both as his drag persona and as himself.

How did makeup become a part of your life?
When I was younger, my grandmother always had this tall drawer, and on the top shelf nandiyan ‘yung makeup niya. I would climb up to check and look at her collection. Then in high school, may electives kasi kami sa Cavite. At the time, I chose cosmetology. Not only do I know how to do makeup, but I also know how to do nails and hair, marunong pa akong mag-foot spa. I even did makeup for local pageants. Then after college, I would do test shoots, meet different people, really try to put my name out there. Then now, I professionally do makeup.

Can you tell us more about your drag persona?
Her name is Bambi, based on Azealia Banks’ stripper name. I love Azealia Banks. I would say she is the female version of me. It’s not who I really am, rather she [Bambi] is just a small part of me. She loves to dance, is super confident. Maganda kasi siya and she knows it. 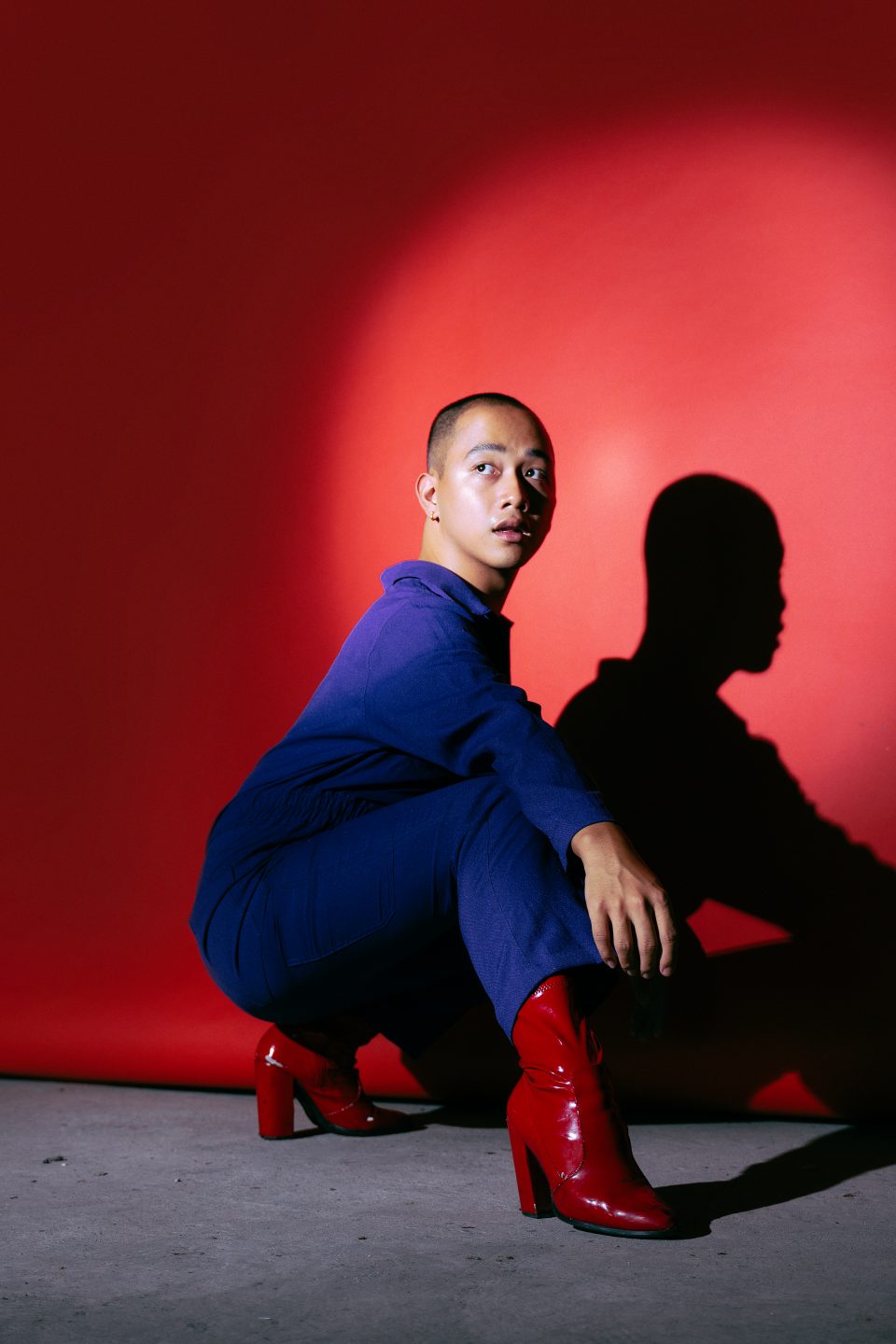 “Actually, it’s not even blurring lines because there are no lines. What is to be feminine or to be masculine? Parang why should we try to question what it is when it’s just that?”

Does drag change your personal style in any way?
Now, I dress differently. Wala na akong pakialam masyado sa katawan ko or what I wear. I feel that doing drag is like exposing yourself to people you want to be surrounded with. Bambi is the product of all my friends: people who embraced themselves or didn’t care about what other people think of them. So Bambi, or rather my current self, only cares about the opinions of the people who matter.

What do you think about the rise of drag culture and how it’s becoming more and more accepted in the world?
Progress is progress. I’m thankful that being queer and feminine is more accepted now, but there’s still such a long way to go. However, I don’t want to focus on the negative side. We have so many things to do, but right now I am happy that we are being seen more.

What have you discovered about yourself through drag?
It’s about blurring lines. Actually, it’s not even blurring lines because there are no lines. What is to be feminine or to be masculine? Why should we try to question what it is when it’s just that? Why do we need to label things? Why try to be in a box? When in fact, there isn’t even a box to begin with. 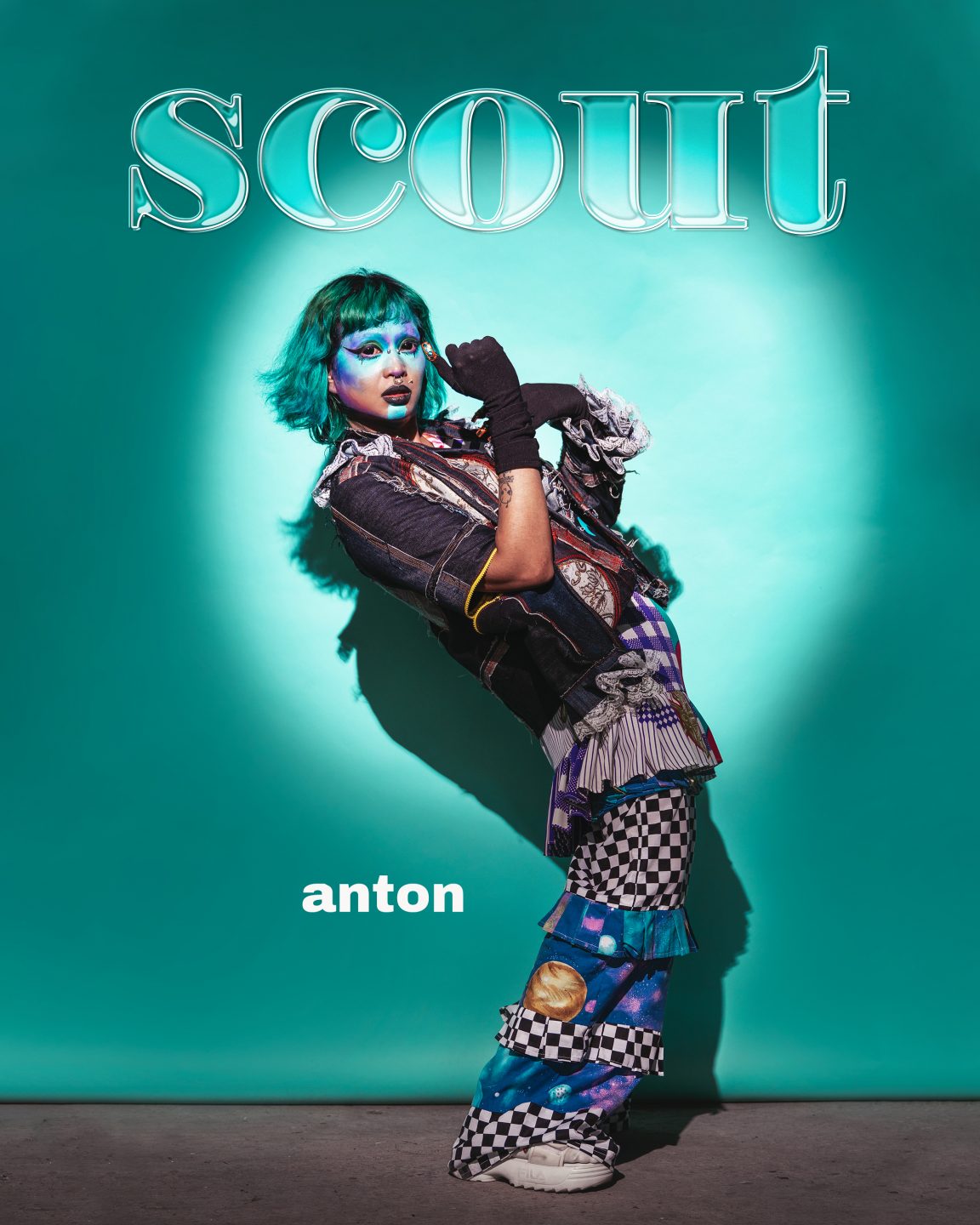 Anton is a model/artist who looks like a ‘cosmic housewife’ from the ’60s. “’Pag dinescribe mo kasi ‘yung1950s to 1960s—lahat super colorful. Lahat mukhangcandy-colored, mukha siyang perfect and glossy, pero maraming issues behind it,” they describe their aesthetic.

This mirrors Anton’s style journey. Through fashion, they slowly became more comfortable in expressing who they truly are. Anton’s style became otherworldly, colorful yet gloomy, and filled with new possibilities. Unlike before, they no longer care about others’ opinion. “I just dress up for myself,” Anton tells us. And they wear this statement well.

What do you consider yourself, if not a drag performer?
Feeling ko more on transvestite. Hindi ako entertainer, I just dress up for myself talaga, so eto ‘yung normal ko. Siyempre may mga toned down looks din ako, pero ito ‘yung sino talaga ako. 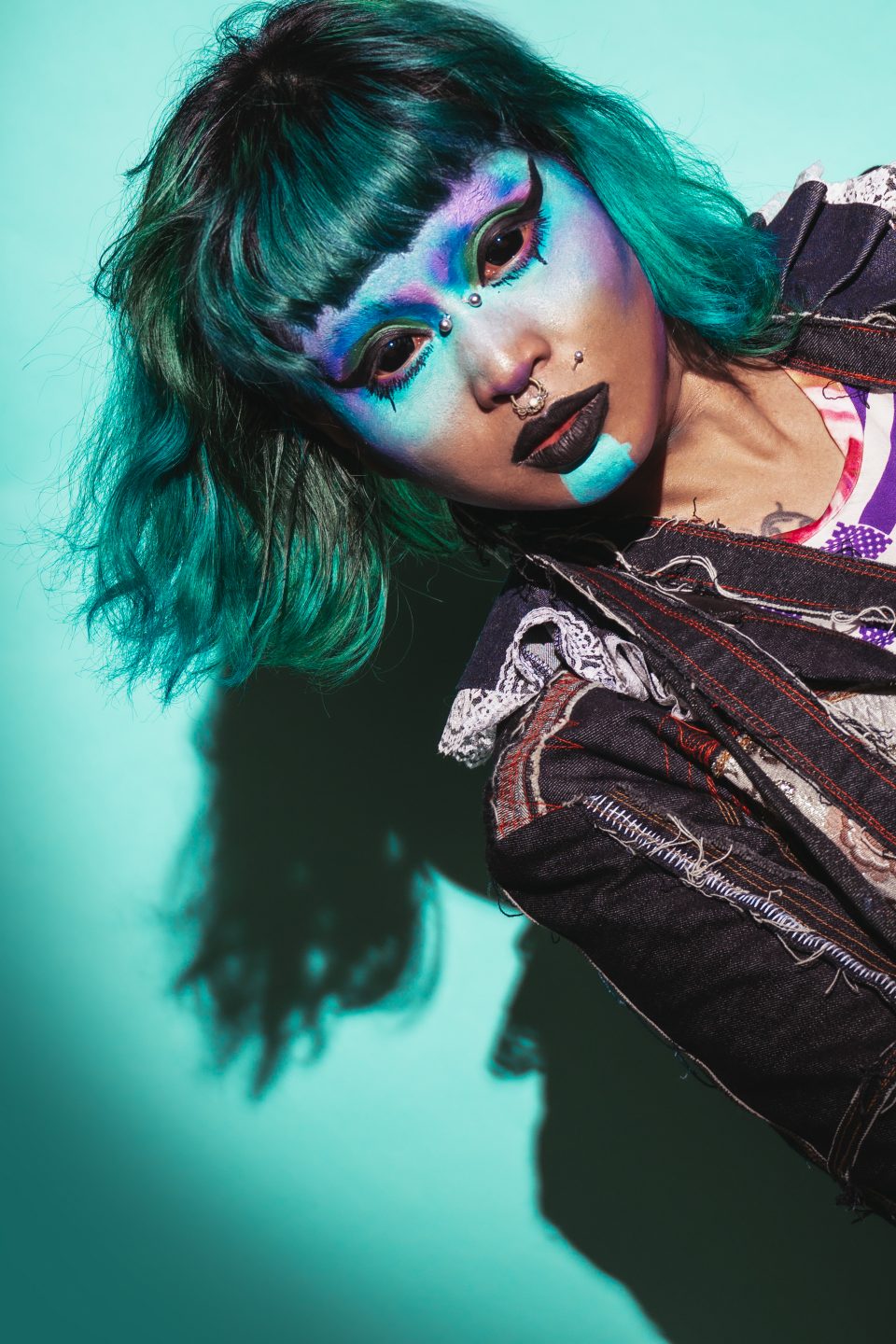 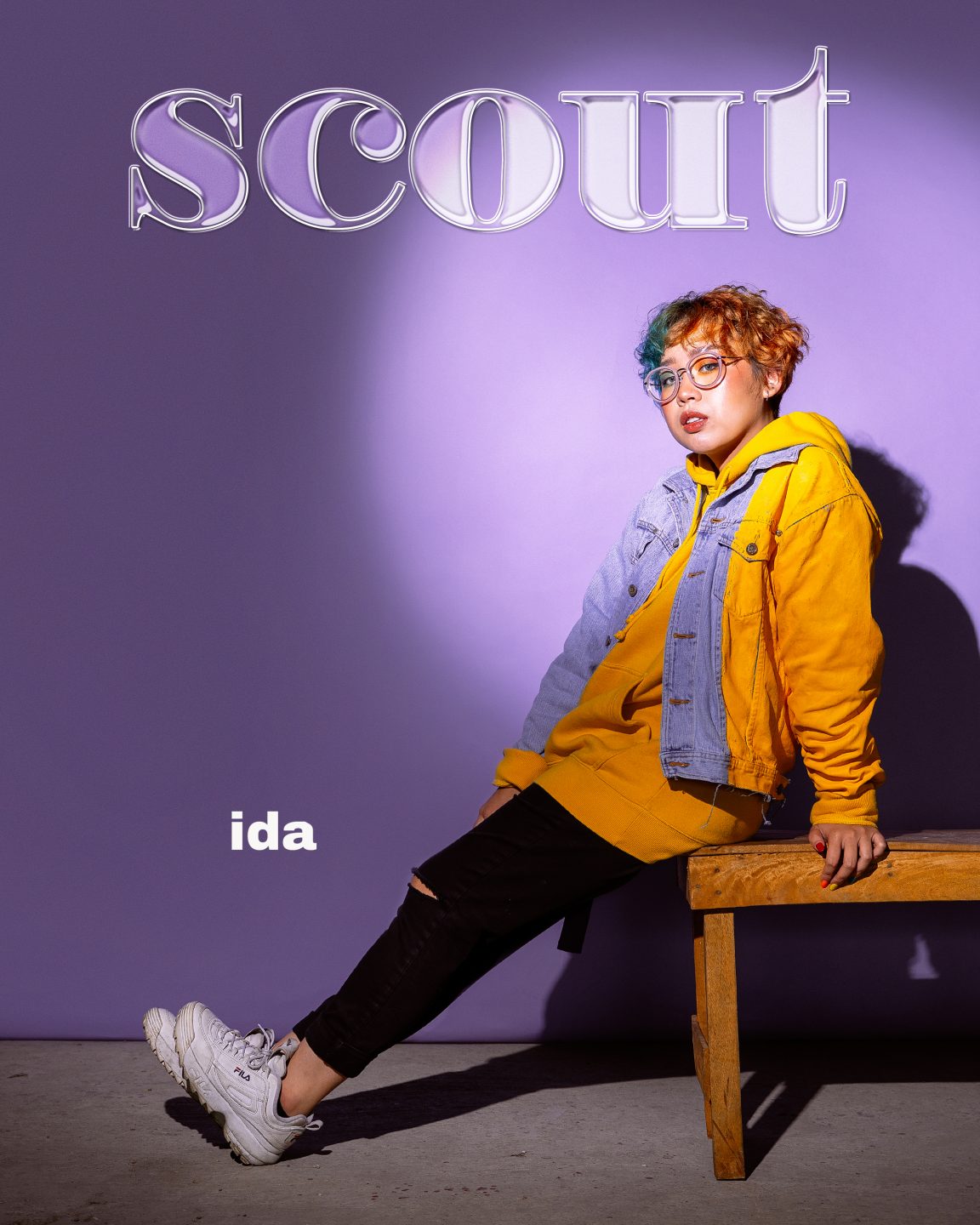 Ida is a young makeup artist/model who likes to live in bold colors. Her hair during the day of the shoot is dyed partly in two colors, with her eyelids matching her hair. Her personal style spells no fear and no limits. “Labels can limit people,” she says. And she doesn’t let them keep her from shining.

What got you into makeup and fashion in the first place?
Noong bata pa lang ako, I’d be very particular about what I wear and how I look. For makeup naman, my parents told me nung preschool daw, I would always wear lipstick before I leave the car for some reason. Preschool ’to ah [laughs]. So bata pa lang pala ako, kikay na ako.

What are your thoughts on gender and fashion?
It’s good that androgynous fashion is becoming popular. I think kung gaano ka-fluid ang gender, ganoon din dapat ka-fluid ’yung expression when it comes to fashion. Limiting people or putting people in boxes na “eto, feminine lang” o “eto, masculine lang” limits people’s expression. It could be different, it could also be the same. It varies. 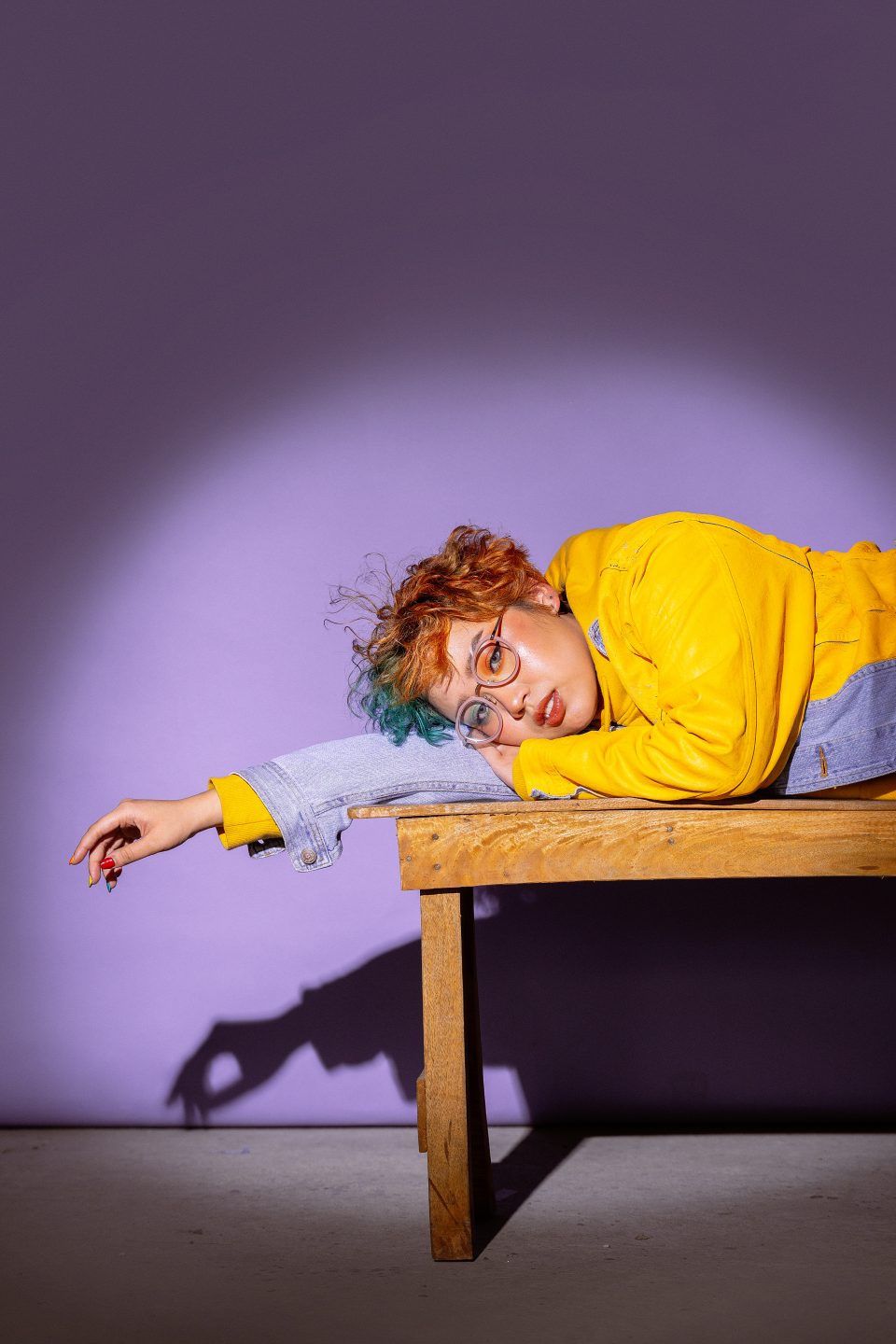 Could you tell us more about growing up as a young bi person?
Kasi I came from an all-girls school, so… [that] explains a lot [laughs] and ‘nung time na ’yun I really didn’t think it was not normal. Before I turned grade six na nagkaroon ng rules na “ah bawal talaga ’to.” Before, I thought it was a normal thing people go through na girls have crushes on guys, but girls can also have crushes on girls, so never ko siya nakita as wrong personally. I don’t think it’s a factor sa personality ko ’cause I’ve always been like that.

How do you find the courage to express yourself through fashion?
For me, it’s part of my art. How you express yourself becomes a brand din. The main thing is wala na akong pake if I get negative comments. In my opinion, I’m not really doing anything wrong. I’m just expressing myself. Personal lang naman talaga ’yung expression, as long as it’s not offensive to people. 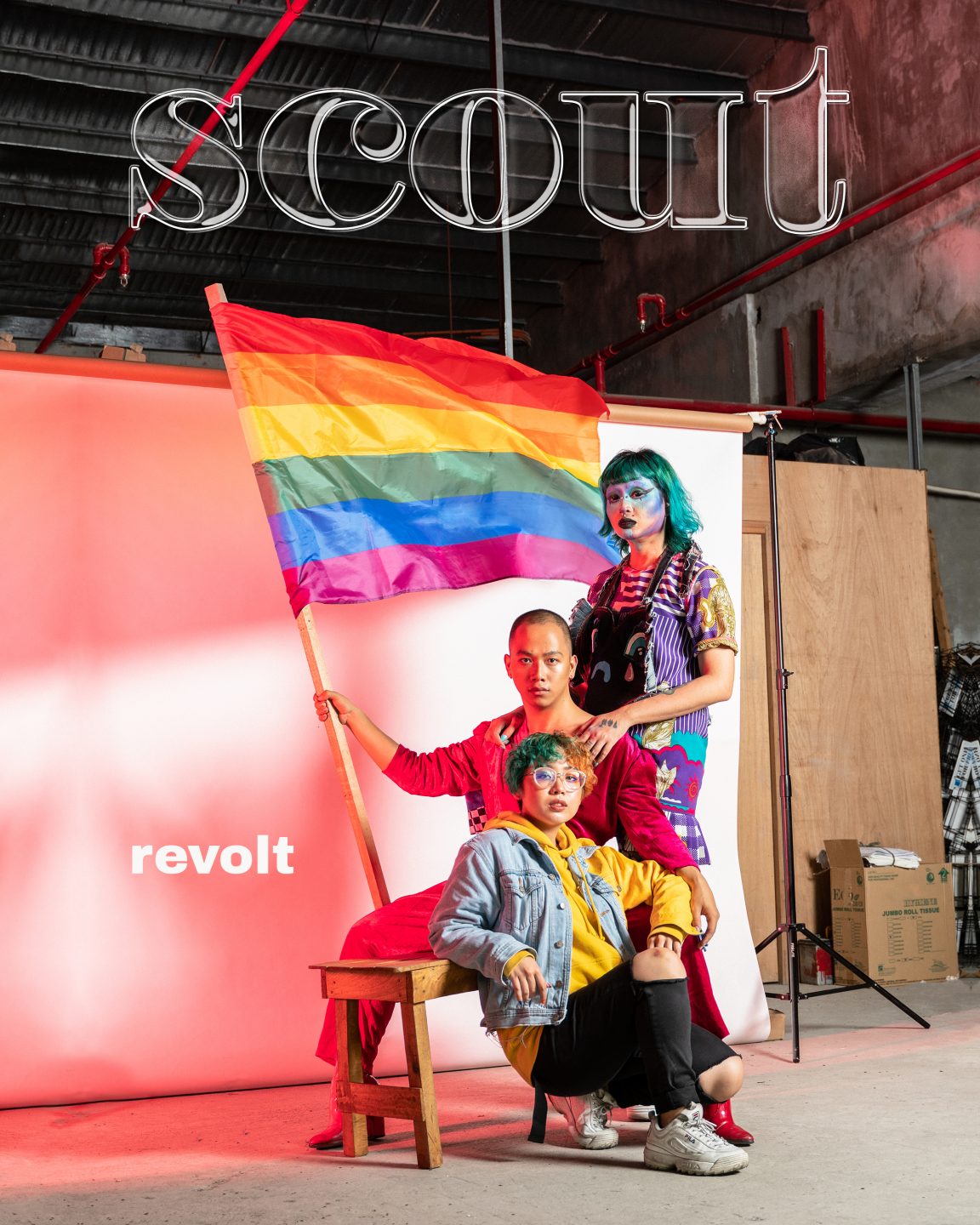 SHAREWhat a time to be alive. The visual counterpart of “Power Is Power,”...