Our queer culture seems to be thriving. Metro Manila Pride March this year had more than 70,000 attendees, queer safe spaces are growing in numbers, and we even have a locally made queer dating app hitting the market soon. Progress is slow, but progress exists…in Metro Manila.

But what does it mean to be queer outside a the capital? Is this progress we speak of experienced in other parts of the country? We must understand how diverse Filipino queer identity is. The country’s entire queer culture doesn’t exist in one city alone.

The region of Bikol’s strong cultural identity fuels their own storytellers. From their diverse range of macrolanguages to their influential folklore and mythology, Bikol never runs out of stories to tell. And in BKL/Bikol Bakla: Anthology of Bikolnon Gay, Trans, and Queer Writing, Bikolnon queer writers from Bikolnon queer narratives.

“We are the new norms. We have our stories to share. Hence, this anthology.”

“We’ve had early works of writers such as Kristian Cordero, Danton Remoto and the late Carlos Arejola, but  we’d hope for an anthology to encapsulate the narratives that frame Bikolnon gay, trans, and queer life,” one of BKL/Bikol Bakla’s founders Paolo Sumayao recalls the early days of this anthology.

“Years later, over dinner, together with my co-editor Jaya Jacobo and the late Carlos Arejola, we jokingly pondered on a book that celebrated the Bikol Bakla. The rest, as they say, is history.” 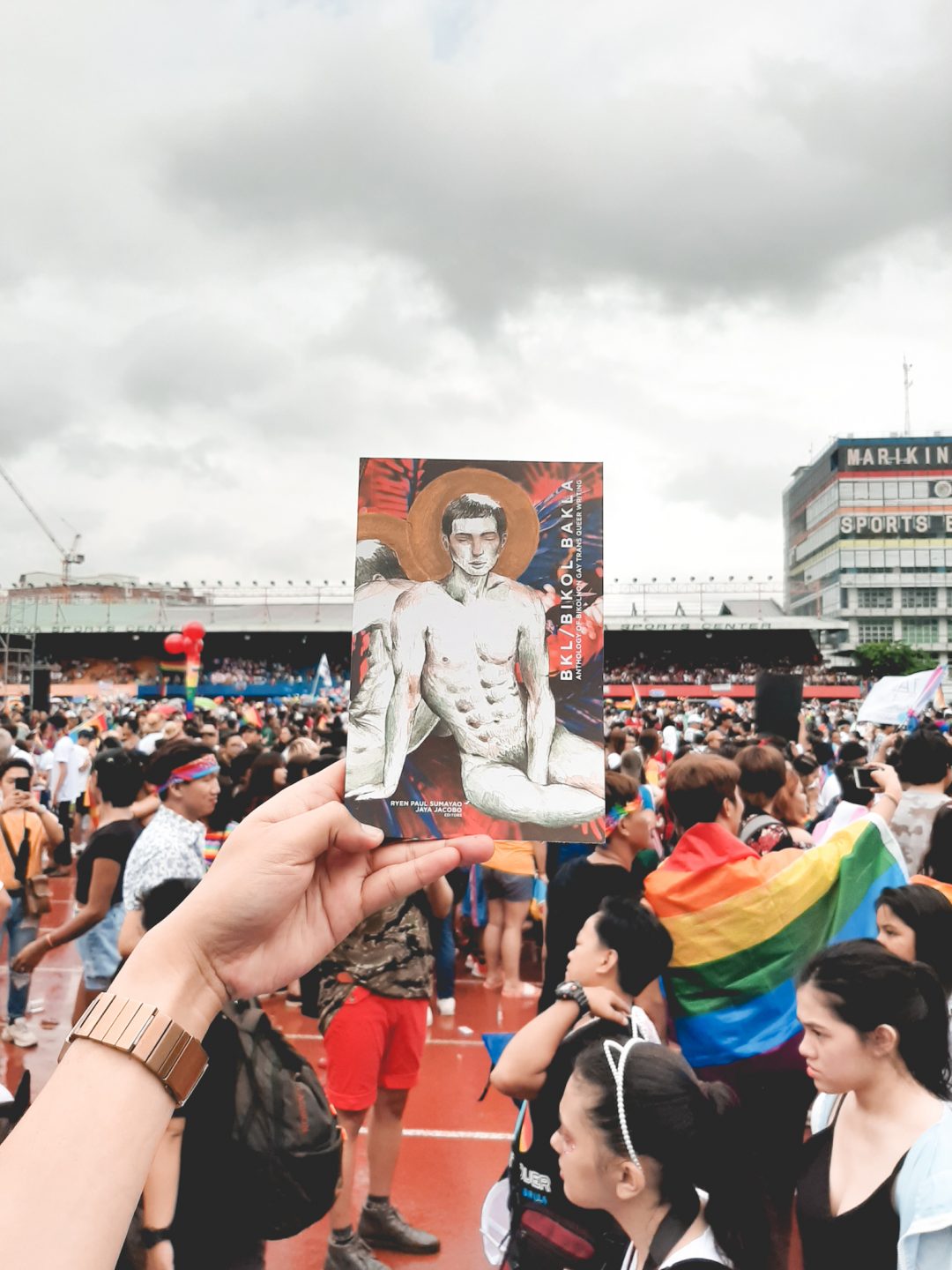 BKL/Bikol Bakla launched last Mar. 23. Created by Paolo Sumayao and Jaya Jacobo, this anthology collects queer stories from gay, queer, and trans Bikolnon writers. In this anthology, not all texts are translated in Tagalog or English, others were left in its original Bikolnon text for the stories to stand on their own—saving it from possible aberrations brought about by the process of translation.

They aim to release proses on Bilol’s queer life from a diverse bunch of queer Bikolnon writers, as they try to define what it means to be a Bikol Bakla.

We caught up with BKL/Bikol Bakla’s Paolo Sumayao and talked about Bikol’s queer culture, LGBTQ+ narratives in Filipino literature, and their hopes for their young anthology.

What sparked the idea of starting this anthology by and for Bikolanos?
We’d read the works of writers J. Neil Garcia and Danton Remoto alongside the early writers of Ladlad back in college, and we’d always end up looking for text published for a Bikol audience.

Are you looking for anything in particular while compiling these pieces?
We weren’t really after any expected outcomes. We’re just particular for the contributors to be ‘out’ to make sure the anthology becomes a credible resource.  We just let the submissions shape the anthology itself. 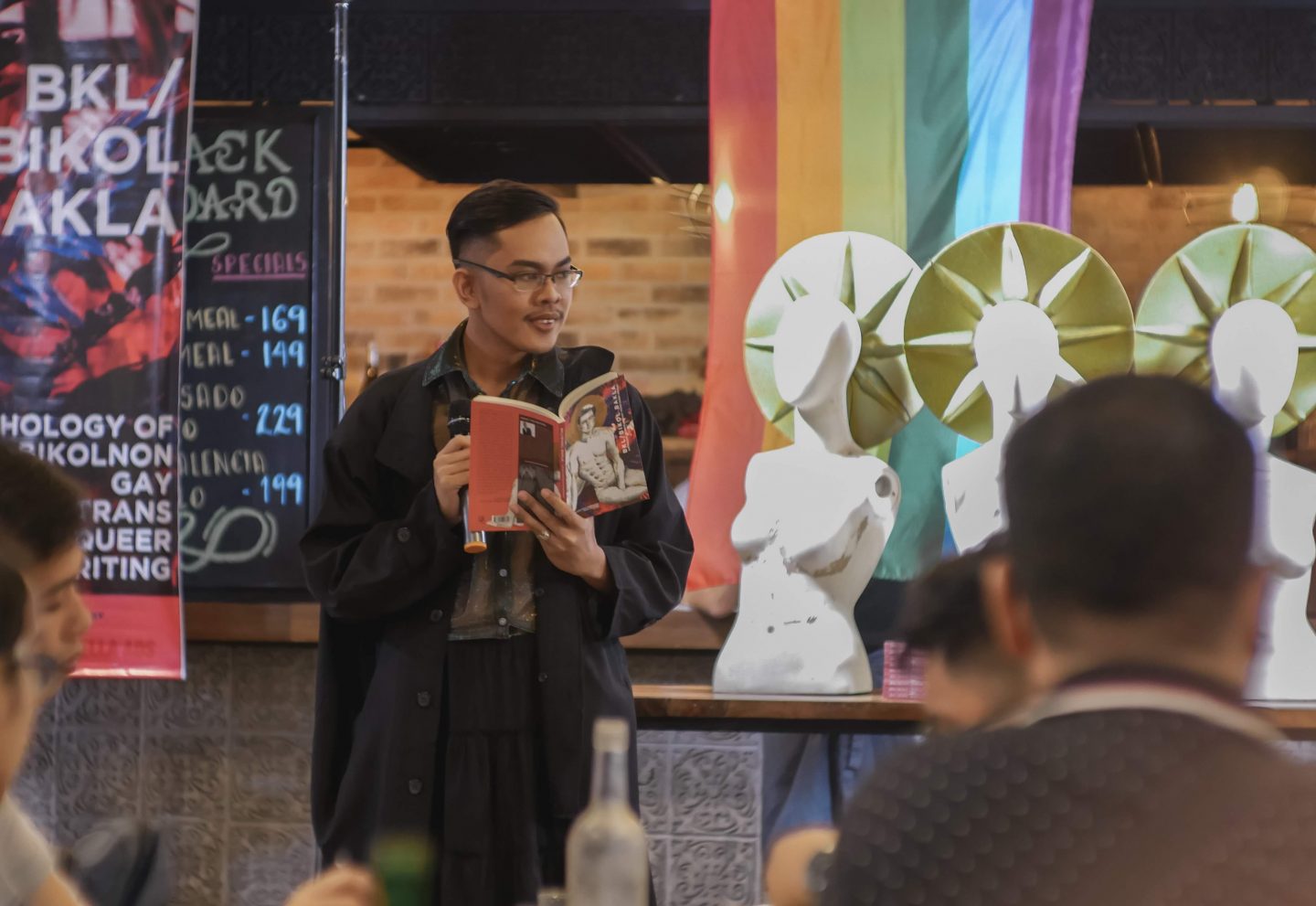 For one, we didn’t have a lot of submissions, we had less than a hundred. This way, one by one, the submissions slowly identified the direction of the anthology, which was kind of organic.

Who are the writers that can contribute to your anthology?
The writers who are part of the anthology have varied backgrounds. Quoting from the introduction of the anthology, “The Bikol-rooted all-gay, queer, and trans ensemble is a formidable line-up of writers, filmmakers, teachers, bankers, lawyers, professionals, artistes, and illustrators, each with admirable feats in their respective fields.”

“We envision a country with a well-represented LGBTQ+ community in its body of texts, noting that the regional voice, too, is as essential as its metropolitan counterpart.”

What specific piece did you find particularly unique or interesting?
We especially liked the pieces produced by young writers. They were able to frame their own stories in ways that are both specific (set in their own tropes and localities) and universal with such novelty. We liked how they were upfront with their messages and narratives: be it on cruising, intimacy, relationships, among other things.

Could you tell us more about the queer culture in Bikol?
We feel it’s really no different from its other provincial counterparts. We’re just big pageant fans. For instance, we have one of the longest-running gay pageants in Asia.

But due to Bikol’s recent cultural renaissance in literature—the arts, food, tourism over the last few years—all eyes are on Bikol. As a region, we take pride in the best that we can offer.

Apart from writers in your anthology, do you follow any Bilolano queer writers?
I’m particularly fond of the translations of Kristian Cordero of Kafka and Wilde alongside several other works. I first read of his works in college and he was one of the few writers I have adored because of his cunning use of language—Bikol especially—in harnessing the region’s poetics.

Read more: These five LGBTQ+ books portray issues that we should know about

Why is this the perfect time to highlight Bikol’s queer culture?
Over the last few years, we’ve seen the rise of cases on issues related to the lives of Filipino LGBTQs: the passing of the SOGIE bill, the rise of HIV cases, mental health issues, discrimination and hate crimes, among others.

“The Bikol-rooted all-gay, queer, and trans ensemble is a formidable line-up of writers, filmmakers, teachers, bankers, lawyers, professionals, artistes, and illustrators, each with admirable feats in their respective fields.”

We felt the need to come up with a project that not only acknowledges our presence, but puts us in a pedestal for people to see. We are the new norms. We have our stories to share. Hence, this anthology.

Do you hope the release of this anthology influences the Philippines’ entire LGBTQ+ scene?
We envision a country with a well-represented LGBTQ+ community in its body of texts, noting that the regional voice, too, is as essential as its metropolitan counterpart.

What are your hopes or expectations for queer culture and literature in Bikol?
We hope that by having this anthology, we would be able to inspire many young queer writers to publish their own texts and be brave enough to narrate their own stories.

SHARESuicide is the 10th highest-leading cause of death in the world. In light...

SHAREIf you’re missing SarawaTine like all of us, here’s some news to beat...

SHAREIN PARTNERSHIP WITH HONOR Ah, the selfie generation. It’s a label so often...