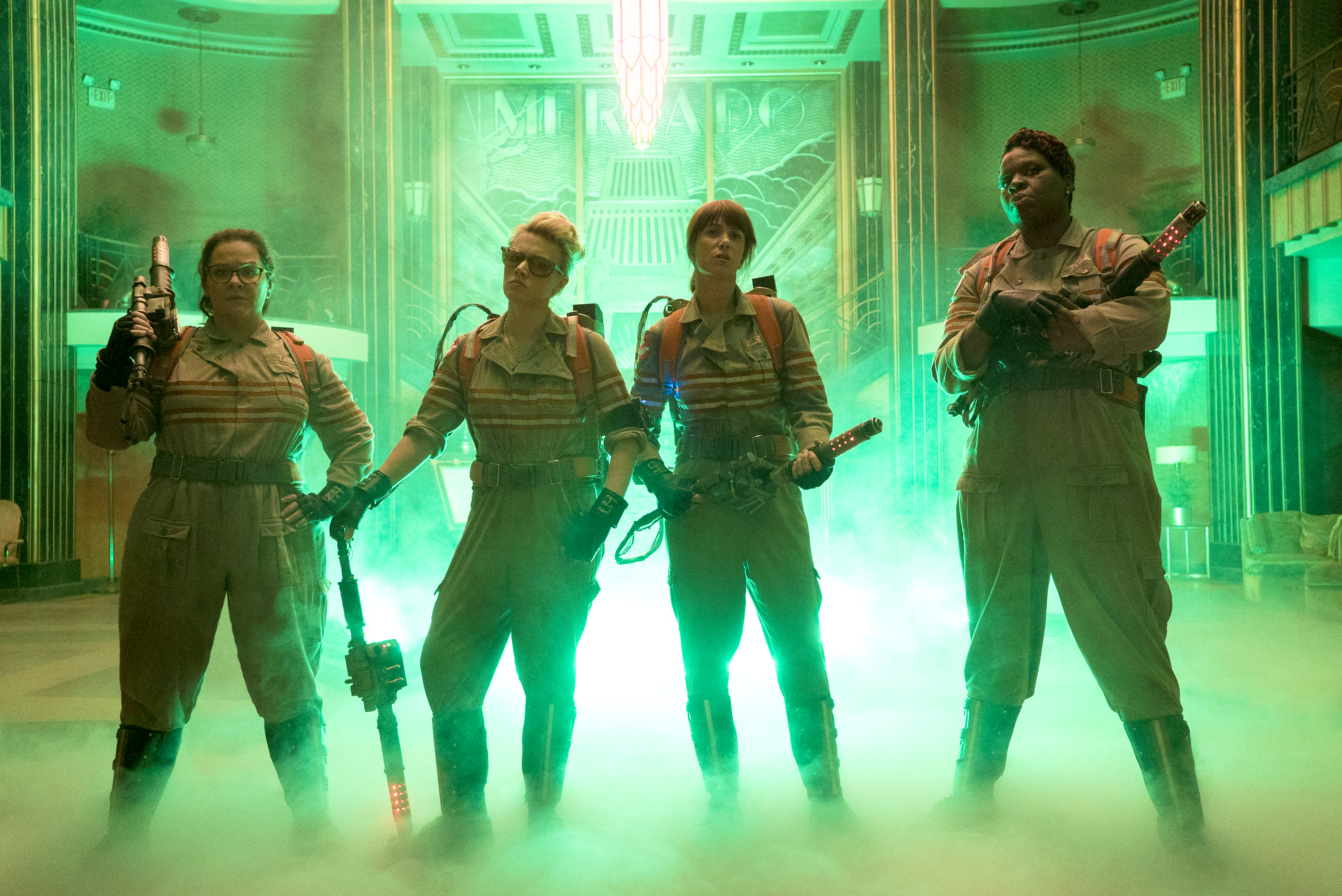 The Ghostbusters reboot is a comedy for our times. It’s self-aware, but doesn’t sacrifice the treacly fluff of a summer blockbuster. You laugh at the ghost spewing ectoplasm on one of the scientists, but also at how the big bad is an enraged fanboy (much like the legions of haters howling how the movie destroyed their childhoods). Here are four women, unapologetically doing things and making things and occupying space for themselves. They have impeccable comedic timing, but the jokes are not on them. Ghostbusters has no self-deprecating punch lines on race or size or self-presentation. Instead, we laugh at the ridiculousness of earning tenure, or using a hearse as a get-away vehicle, or pitiful YouTube comments (“Ain’t no bitches gonna hunt no ghosts”).

The first Ghostbuster we see is Dr. Erin Gilbert, a physicist gunning for tenure at Columbia University. She loses her chance thanks to a book she and estranged colleague Dr. Abby Yates wrote years ago, which argues the existence of the paranormal. Erin soon joins forces with both Abby and resident engineer Dr. Jillian Holtzmann to bust ghosts, and MTA worker Patty Tolan hops on board after seeing a ghost on the subway tracks.

In an interesting role reversal, the dumb secretary is played by Chris Hemsworth, who struggles with using the phone and serves as—for the most part—a semi-permanent decoration in their office. The first victim of a haunting is a male tour guide, whose scream signals the opening credits. (How many iconic women screamers have we seen in horror films? Hi, Psycho. Hi, Scream. If anything, the film is saying how unnecessary these tropes are.)

The antagonist of the film, Rowan North, is fueled by male entitlement. Yes, really. He wants to cleanse the world because no one has ever recognized his genius. The best part? His ghost-summoning technology was based on the theories in Abby and Erin’s book.

The ghosts are real (duh), but no one believes them. The New York City government publicly frames the Ghostbusters as frauds to protect red tape bureaucracy while secretly encouraging them to continue hunting ghosts. It’s funny to see the Mayor’s spokesperson denouncing the four women on record (and to see the Department of Homeland Security doing nothing and being useless), but the girl who cried ghost narrative is familiar to many women who are silenced at school, at home, or at work. Think about the concept of female hysteria or how we paint women to be too emotional (as if that’s even an inherently harmful thing to be).

[pull_quote]The original Ghostbusters showed the world that a ragtag team of geeky men, who did not fit the typical prototype of the action star, could become heroes. The reboot promises the same: women can love science, history, or building things, without pretense.[/pull_quote]

Ghostbusters is not afraid to poke fun at tropes, and does so in an almost flippant, “get over yourself” way. After all, the new Ghostbusters are not here to replace Bill Murray and company. The remake is just that: a remake. Proof that the 80s legacy lives on. A love letter that shows how the original has secured its rightful place in cult history. A new addition to the ever-growing list of Ghostbusters media—and an addition that wants to be more resonant to the people geek culture has generally forgotten about.

Because, yes, pop culture is incredibly influential, whether we like it or not. The original Ghostbusters showed the world that a ragtag team of geeky men, who did not fit the typical prototype of the action star,  could become heroes. The Ghostbusters reboot promises the same: women can love science, or history (“I read a lot of non-fiction,” Patty shares), or building things, without pretense. There are no melodramatic backstories that rationalize their love for the paranormal. The backstories we do get, however, talk about feeling different from everyone else – and that those feelings are valid and important. Toward the end of the film, one character waxes poetic about the beauty of physics, and the beauty of their friendship.

The new Ghostbusters are relentless and sure of what they stand for. They’re not ashamed to publish books on the paranormal (or, at least, learn not to be ashamed), nor are they embarrassed to be loud, dress the way they want, call people out, and demand space and respect. The four women don’t have to prove a point; they just exist, as radically and as unapologetically as they can (and throw in a handful of jokes for good measure). They’re Ghostbusters, they’re scientists, they’re New Yorkers, they’re women. End of story.

Bottom line: the Ghostbusters reboot is gleefully meta, and is funny enough for a summer hit (the self-reflexive humor is an added bonus). Honestly, though, I’m just glad I can finally be someone for Halloween. (And, it seems, so are lots of little girls.) Now, who you gonna call?

Regardless of this meme running its course, I still want answers. Can we...

SHAREBy Martie Rosales Following the success of its third season on Netflix last...