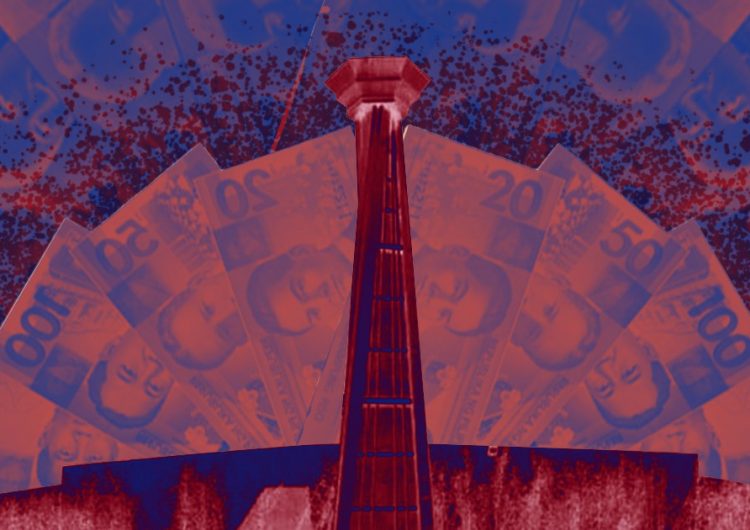 Today in Why Can’t We Have Nice Things?: The government continues to elude our people of said  “nice things.” By nice, we mean basic. Basic things.

About P50 million has been spent on a gigantic cauldron (kaldero) for the 30th Southeast Asian Games’ torch lighting ceremony. Officials have time and again defended these bloated purchases by saying that hosting SEA Games is—yup, you’ve heard this countless times—an honor. But is this oversized entity sitting on New Clark City Athletics stadium necessary?  For a third world country, we sure have messed up priorities.

Senate minority leader Franklin Drilon has already questioned this excess. Meanwhile, House Speaker Alan Peter Cayetano defended it, describing the cauldron as a “work of art” and monument for the athletes. Sorry, but we’re not having it. If anything, we’ve just been reminded of a lot of things in the country that are more deserving of proper funding.

In Ramona Diaz’ documentary “Motherland” (2017), the state of Fabella Hospital, Manila’s “baby factory,” was revealed. There are crying babies everywhere, but not just because of teething gums or light hunger—they might be uncomfortable in the under-resourced hospital. It can be seen with their mothers, still feeling their fresh, painful stitches, being forced to squish themselves in one hospital bed together with other moms with their newborn babies. The clincher? 100 babies are delivered there every day.

Meanwhile, the Philippine General Hospital (PGH), which is supposedly our “National University Hospital,” remains as one of the many underfunded hospitals in the country. An Inquirer article reads that PGH mirrors the current state of Philippine health care. In an interview, Mary Grace Villanueva, a BS Nursing graduate from PGH’s administrator and operator University of the Philippines Manila, told us about her eye-opening experience. Having worked in PGH for three years mainly in the hospital’s charity ward, she saw how the hospital’s main problem revolved mostly around the staff and equipment. “Sobrang understaffed. 12 to 15 patients per nurse per shift, compared sa ideal na four patients lang per nurse per shift. Kung nurse ka, halos 30 minutes ka lang per patient, [so] naco-compromise ‘yung care.”

Just like Fabella, there’s also a lack of beds. The charity ward is typically “full house,” which means 62 beds are occupied, and this is why some patients couldn’t be admitted. People then get piled up in the emergency room. The scene in the ER is even more heartbreaking—some patients sleep on the floor due to the absence of stretcher beds and wheelchairs. One thing they do to eliminate these recurring problems is to inform the patients of the hospital’s state beforehand. “Kung may patient na lalapit sa triage at magpapa-confine, ine-explain naman ng triage kung anong sitwasyon ng ER. Hinihikayat nila yung mga non-urgent na patient na lumipat na lang ng ospital kung saan maaasikaso sila nang mas maayos. Pero if a non-urgent patient insists, magtitiis talaga sila.”

Unfortunately, the government has slashed about P10 million off the funding for health services for 2020. This means employment among thousands of nurses would also be affected. All of these and more in a country trying to fight off recent measles and polio outbreaks. Sounds scarier than a “Black Mirror” episode.

Every year, back-to-school news always remind us one thing: the lack of classrooms. This year, Inquirer walked us through stories that proved there are many students, but not enough classrooms. In Juan Sumulong Elementary School in Antipolo City, teachers sacrificed a part of their midyear bonus to provide plywood—for a makeshift room divider. In 2018, the lack of classrooms in that school was “so acute that classes for the 9,000 students had to be divided into three four-hour shifts.”

Also, who could forget seeing teachers building makeshift faculty rooms in a Cavite school’s restroom? The reaction of Department of Education (DepEd) Secretary Leonor Briones’ was equally unforgettable: “They had their choice. They could hold office in the laboratory rooms, but of course, it is more dramatic, it’s more touching if you hold it in the toilets.” Looks like the point was missed.

Beyond classroom scarcity, last October, we found out about the P11.6-billion budget cut from the Commission on Higher Education (CHED). From P52.43 million in 2019, we’ll expect a decrease to P40.78 billion in 2020, which will jeopardize free tuition and scholarship programs.

Another mall? Hard pass. We appreciate the number of public spaces right now, but that doesn’t mean we don’t need more. Speaking of things we need, a bit of concern from LGUs would be nice.

Read more: We count places in Metro Manila that are open to the public

Many people complain about students overstaying in cafes, but we might want to look into one of the underlying problems: the lack of study areas. The government’s neglect is evident in the Manila City Library. In one of my visits as a college student, staying in the library for too long didn’t feel like the best idea. The floors and walls looked like they’re gonna break any minute, and weren’t study-friendly to boot. A NoliSoli report agrees to this, describing the place as “rusty” and termite-heavy. Aside from updated material and fast internet connection, the library is in desparate need of adequate staff who really understand how a library works.

A study about Manila Bay shares that the harbor’s problems stem from land-based and sea-based sources. This includes “harmful algal blooms, subsidence and groundwater extraction, overexploitation of fishery resources, and habitat conversion and degradation.”

The study’s author says that we can still be optimistic about solving the Manila Bay problem with the right environmental laws, better sewage systems, and more. How about proper waste disposal? Definitely. A 2017 Inquirer report reveals that more than 8,600 tons of trash are generated in Metro Manila. But a 2019 NoliSoli story reports that the MMDA failed to improve the garbage problem. One of the suspects is a lack of solid waste management implementation in the city. Maybe we can draw inspiration from plastic-free cities with effective waste management systems.

The list goes on, really. We know solving everything isn’t an overnight process, but it would really help if we’d all learn to prioritize, don’t you think?