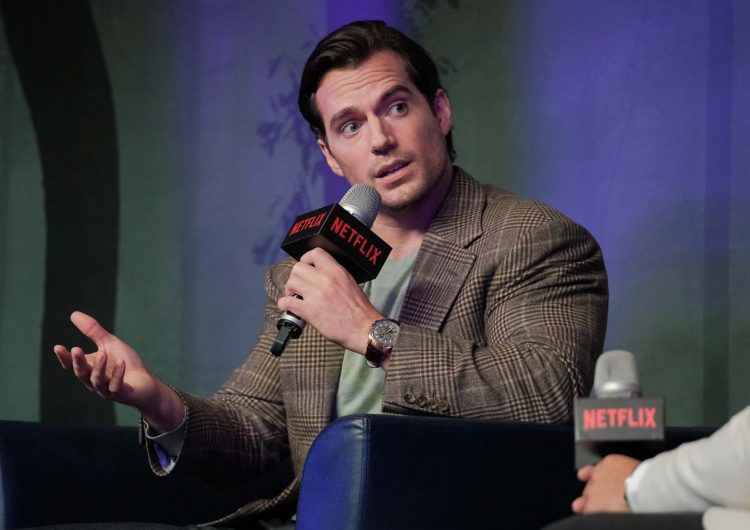 There he was, Henry Cavill, the man who seemed more like a mirage than a person in the flesh. For someone who’s best known as Superman, his real-life counterpart is hardly a Clark Kent—Matteo Guidicelli, the host of the press con for Henry’s new Netflix series “The Witcher,” likened him to a Greek god. And we, the audience, were blessed by his mere presence.

No one can deny Cavill’s magnetic pull. He held the power to reduce press conferences into titters worthy of a fan meet. But when responding to the Greek god comparison, he sheepishly smiled, much like anyone who’s been given a compliment (and it’s at this moment I realized that he’s human, after all).

He arrived in Manila for the Asia Pacific leg of “The Witcher’s” promo tour, where he plays the main character, Geralt of Rivia. Prior to becoming Netflix’s latest binge-worthy series, “The Witcher” was a fantasy-oriented role-playing game for PC and OS X. Even before that, they were a series of high fantasy books written by Polish author Andrzej Sapkowski. 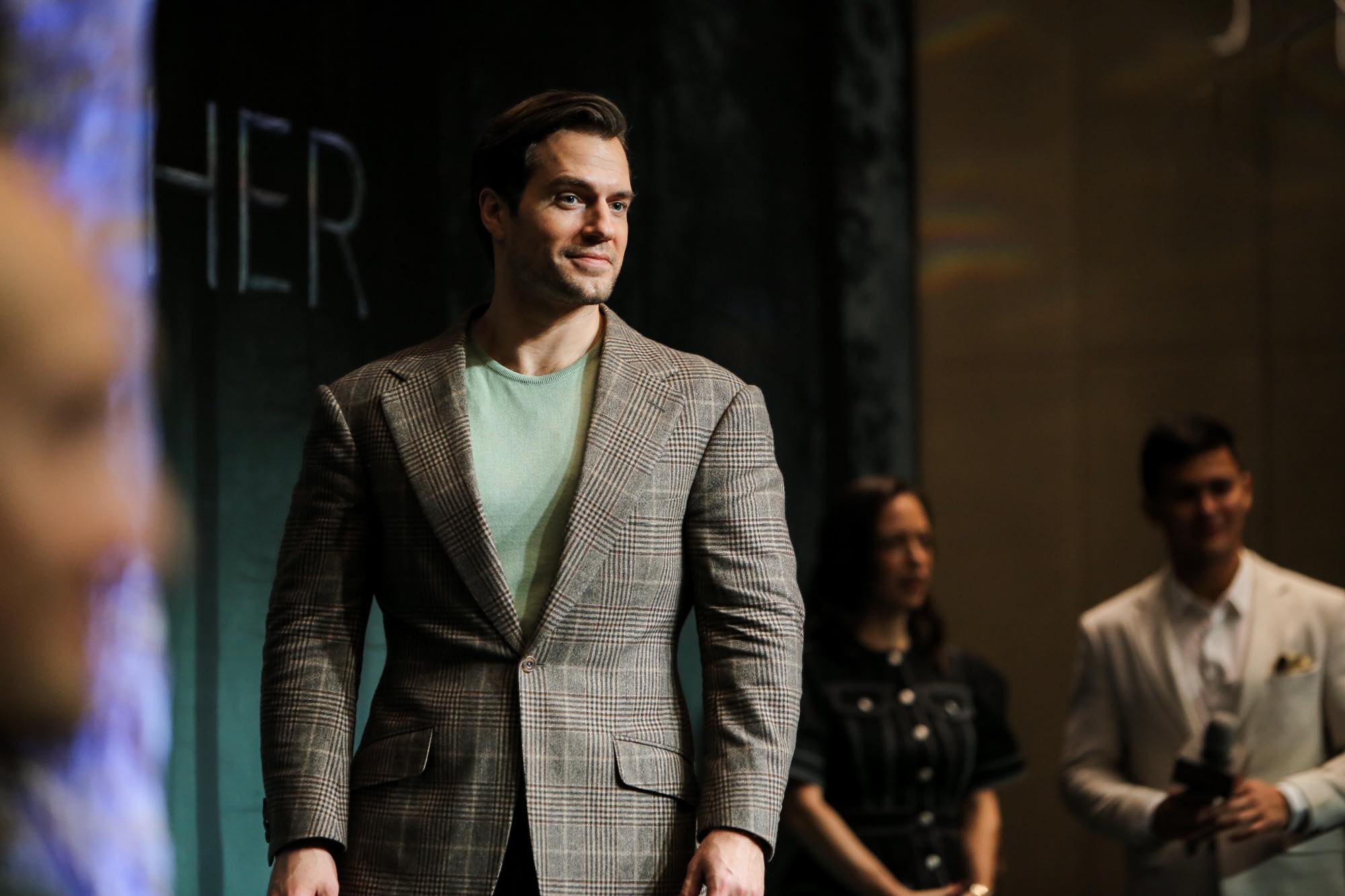 Despite his imposing appearance, the British actor is just like anyone you’d pick from the sea of fans he met the day of the press con. Before landing the role of Geralt, Henry was already knee-deep into “The Witcher” lore, thanks to the video games. Henry himself is a hardcore gamer, having once admitted that he was too busy playing “World of Warcraft” when “Man of Steel” director Zack Snyde gave him an initial call (Henry was able to pause in the nick of time, so the rest is history). He played “The Witcher” game series on PC, and had gone through the whole of “The Witcher 3: Wild Hunt” before being cast.

They must have said, ‘Look, you gotta meet this guy or otherwise, he’s gonna turn up at the door. That would be embarrassing.’ It was about six or seven weeks later when I got a call saying, ‘Would you like to audition for the role?’ I was on holiday at that time. I canceled my holiday, flew to New York for the audition, and the rest is history.

After discovering that the games were based on a book series, it was a match made in fantasy heaven. “I’ve been a fan of the fantasy genre since I was a boy. My father would read to me before I could even read. They were always fantasy books, and every book I’ve picked up to read in my free time has more often than not been in the fantasy genre.” 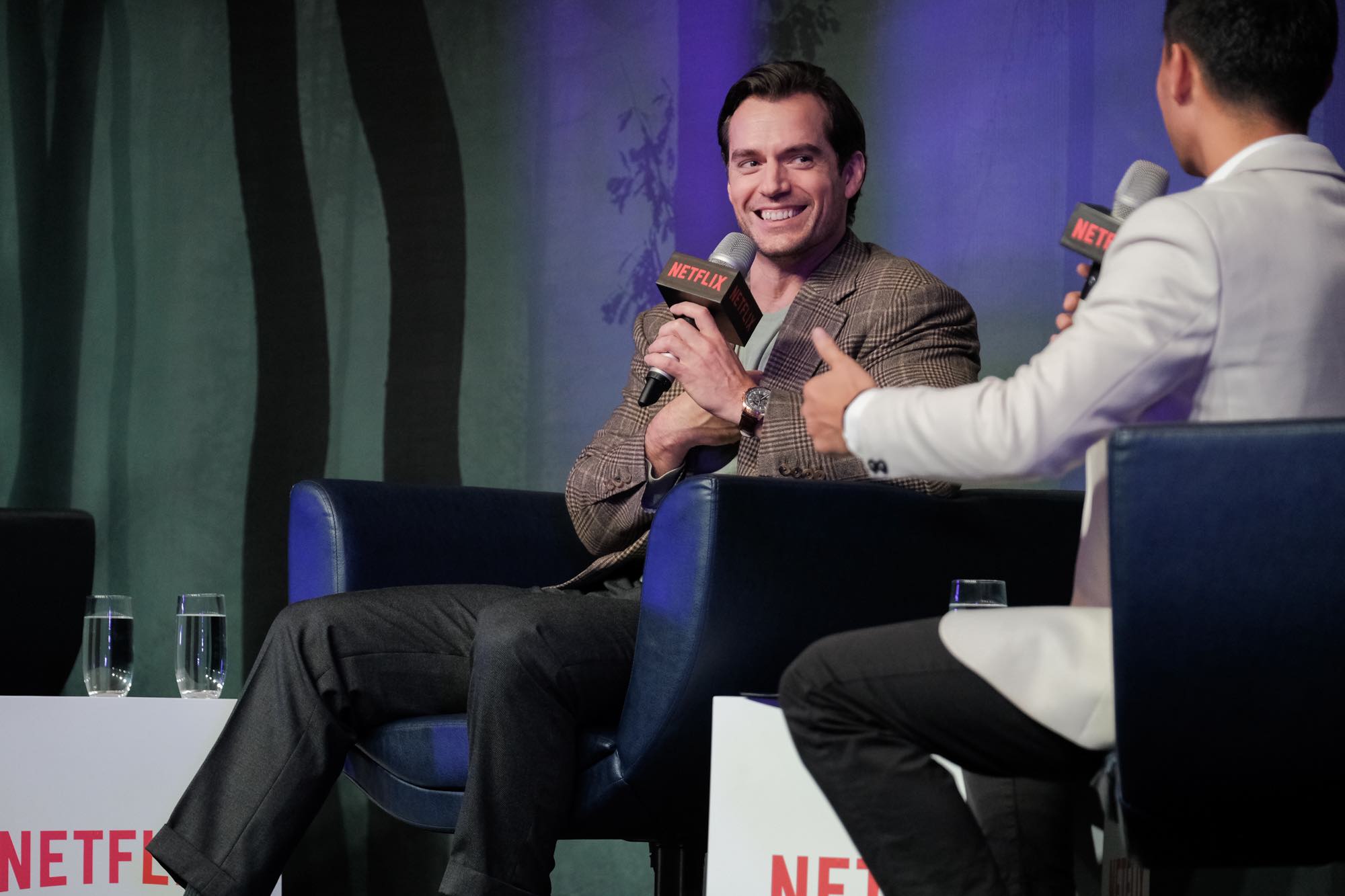 When it came to securing Geralt as his latest acting role, he was nothing short of persistent. “I heard that Netflix was making it into a show. I called my agents and said, ‘Right, guys. I want to at least get into the room here as early as possible, and see if I can get this. This is really, really important to me.’ I didn’t hear anything back for a week, and so I called them and said, ‘Have you done anything yet?’ And they said, ‘Yeah, yeah, we put a call to Netflix.’ Then I asked, ‘Yeah, but have you heard back?’ My agents said, ‘Uh, yes, we have. There’s nothing going on yet.’ I told them, ‘Well, keep on calling until you find what’s going on. And don’t stop calling.’ I called them back every three days just to ask, ‘Have you spoken to them yet?’ And they’d always say, ‘Yeah, yeah. We’ll call again, Henry.’

“They kept on with this, and eventually when Lauren [‘The Witcher’ showrunner] was ready to take meetings, they must have said, ‘Look, you gotta meet this guy or otherwise, he’s gonna turn up at the door. That would be embarrassing.’ Lauren and I had a lovely chat about the character and storyline, and then we went through the casting process. It was about six or seven weeks later when I got a call saying, ‘Would you like to audition for the role?’ I was on holiday at that time. I canceled my holiday, flew to New York for the audition, and the rest is history.” 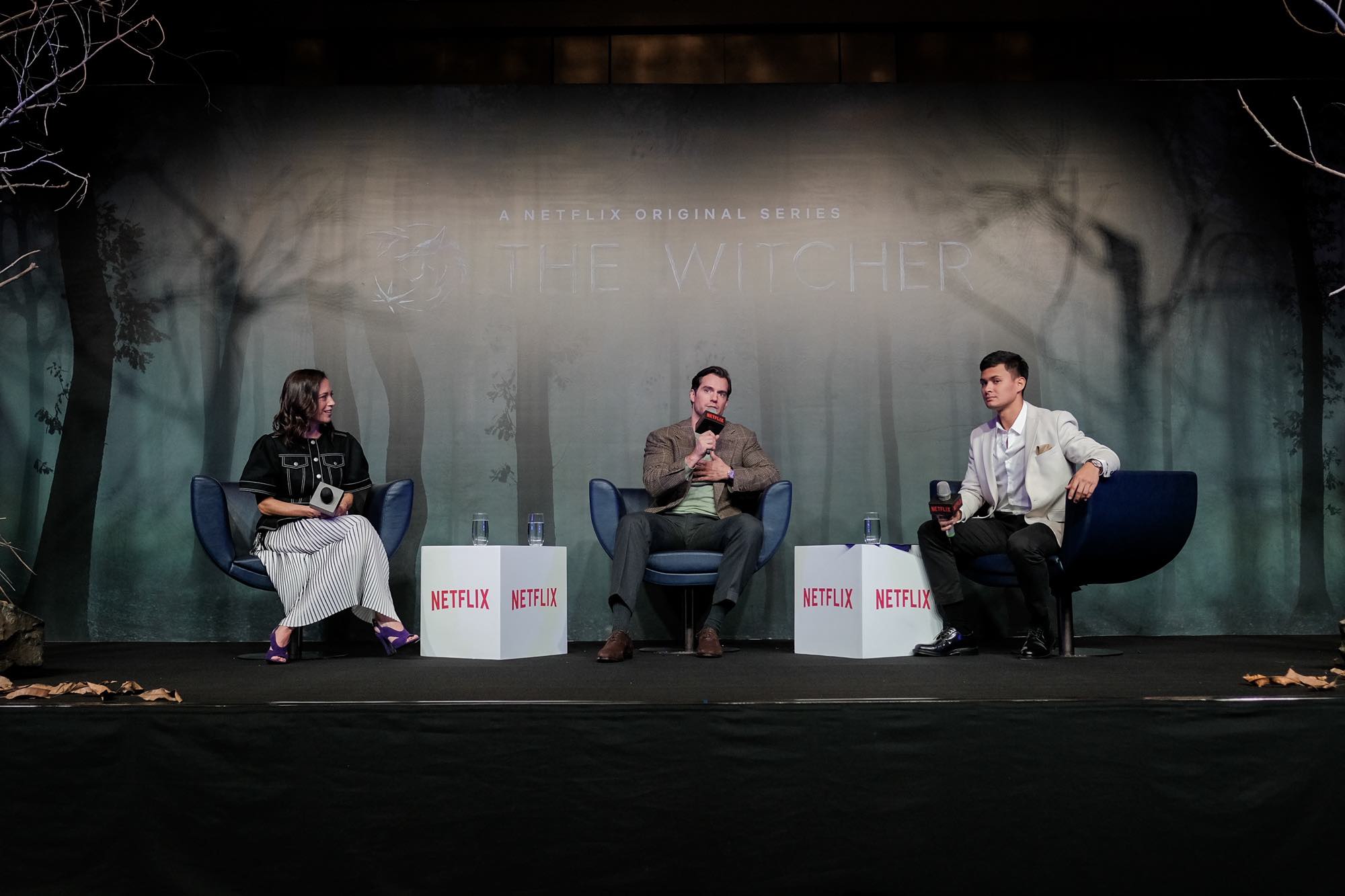 Henry won the role against 207 other potential Geralts from across the world. In response to this eventual decision, “The Witcher” showrunner Lauren Schmidt Hissrich said that Henry has become the Geralt in her mind. “What I realized is that as I continued writing those scripts, I always had Henry’s voice in my head.”

Geralt’s true secret power is his capacity to love, and his belief that the world can become a better place. How he sees the world is not really how he feels in the inside.

“The Witcher” captured the interest of Henry and the series’ loyal fanbase because of its fresh take on the high fantasy genre, much in the vein of George R.R. Martin’s “A Song of Ice and Fire.” The series follows Geralt of Rivia, otherwise known as The Witcher, a being attuned with magical abilities, trained to kill the monsters that dwell in the Continent. “Aside from having a greater endurance than your average human, Geralt can also cast basic spells. These spells aren’t as strong as sorcerers cast, but when combined with their physical prowess, they can be incredibly deadly,” Henry explained. “Aside from that, I think Geralt’s true secret power is his capacity to love, and his belief that the world can become a better place. How he sees the world is not really how he feels on the inside.”

The series also follows two female characters, Ciri, a princess who becomes a witcher-in-training, and Yennefer, the Continent’s resident sorceress. When asked about the show’s representation and her stand as a female showrunner, Lauren replied, “I never think of myself as a female writer, I’m just a writer trying to tell good stories. What’s important to me is that the stories that we’re telling about women are as dimensional and interesting as the ones we’re telling about men.” 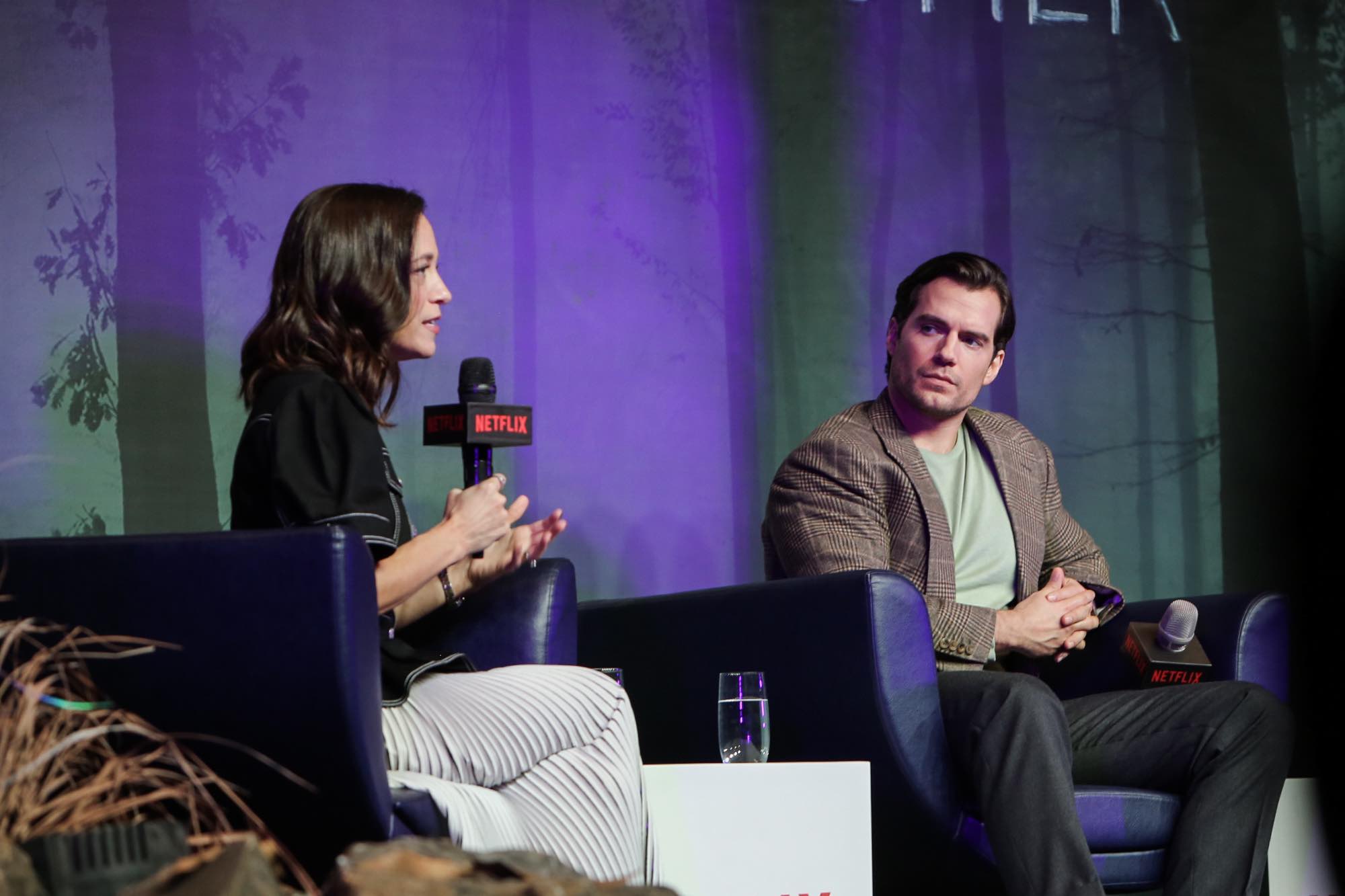 She continued, “I would describe the story of ‘The Witcher’ as a broken family coming together. In this family, there are three members. There’s Geralt, there’s Yennefer, there’s Ciri. Sapkowski spent a lot of time for us to understand Geralt’s soul. I just wanted to make sure that we understand the same about Ciri and Yennefer.”

Henry Cavill’s first meeting with Andrzej Sapkowski was like most hero-meeting scenarios—in that it was a somewhat awkward situation. “When I first met Andrzej, I was very nervous. I was in full Geralt costume. I approached him, shook his hand, and everyone was standing around watching us. I was about to do this stunt, which was a drop from the ceiling onto the floor about 15 to 20 feet. The trickiest thing about it was that it was backwards. I had someone at the top of me at that time. First thing Andrzej says is, ‘I didn’t write this, it’s not my fault! You can’t blame me.’” 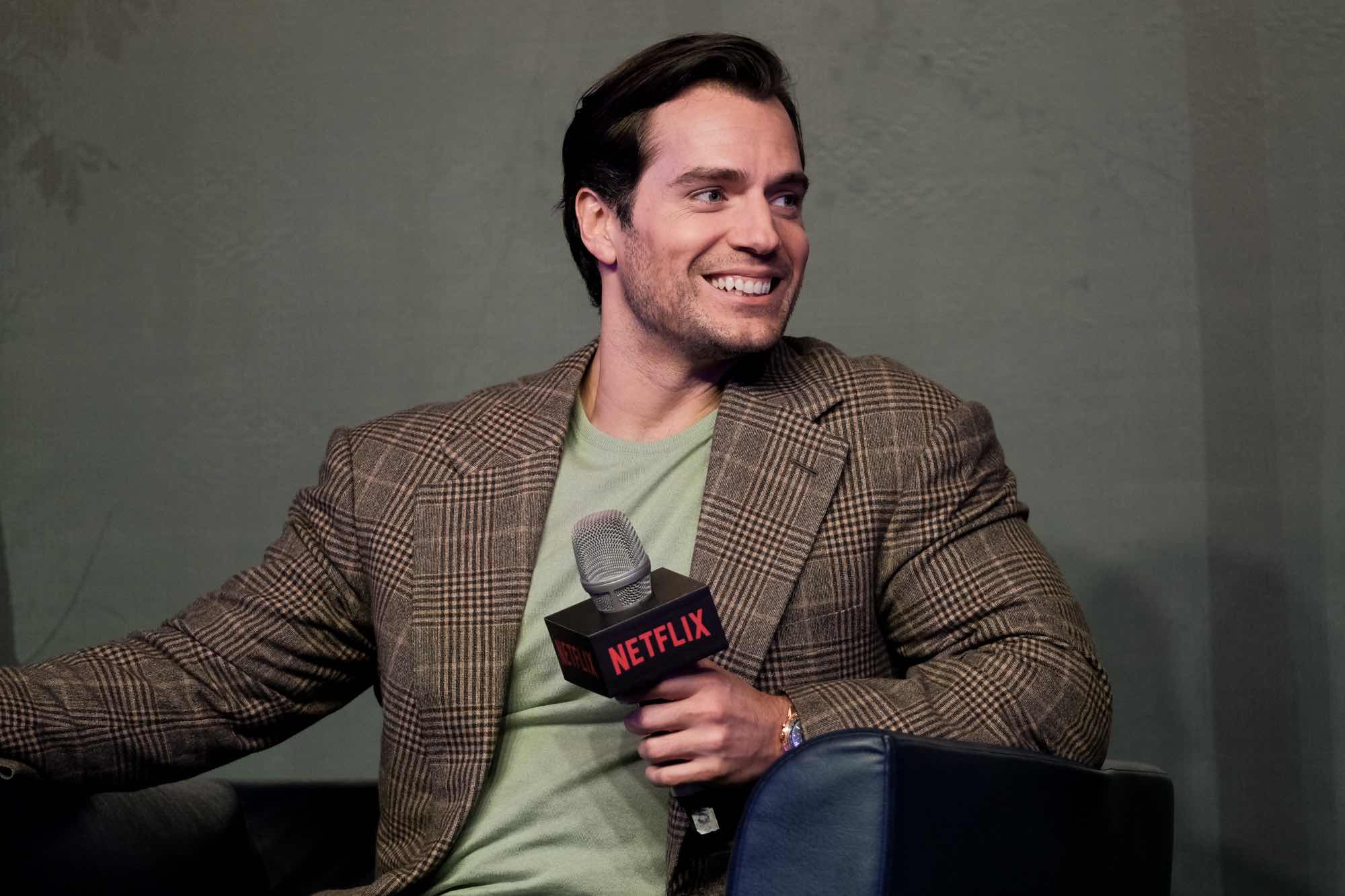 And like most fans, he hopes to continue the conversation with the author. “I’d love to have an opportunity to sit down with him and wax lyrical on ‘The Witcher’ and the world where it came from.”

The chat with “The Witcher’s” cast and crew was much like the fantasy Henry Cavill knows and loves. And if you’re wondering if that same magic is present in the new series—well, you can save a Netflix date on Dec. 20 to see for yourself.

Watch the trailer for “The Witcher” below:

SHARESuicide is the 10th highest-leading cause of death in the world. In light...

Thanks to the makers of “Blue Bustamante” and “Patintero,” plus digital creator Chris...