Gig hoppers and clubgoers cement the legacy of spaces they choose to inhabit.

But where do the kids go these days? Enter Club Matryoshka: the virtual music club based in Manila, hosted on a private Minecraft server. Similarobjects, one of the co-founders of the digital space, was guided by a strong DIY mindset to deliver and recontextualize the musical experience. Club Matryoshka has become the newest hub for musicians, gamers, artists, tech people, hackers, illustrators, animators, meme lords, trolls, and beyond.

Through Discord servers and Mixlr, similarobjects and his fellow founders Obi a.k.a. Seadollar (cavill), Jaime San Juan (dot.jaime), JP del Mundo (John Pope), and Patis Soriano-Del Mundo are experimenting with what else gigs can offer. “It started with my frustration as a gig organizer in Manila. I’ve been organizing shows for so long, but there’s been a huge decline in support and attendance in recent years,” says similarobjects. “On the real, I’ve been throwing parties for so long and I’ve basically been throwing money away. It started to feel like such an empty ordeal for me seeing no change nor improvement.”

With the decline of gig attendance in recent years, the idea of Club Matryoshka became a perfect trial solution for gig culture’s survival.

What inspired this unique virtual gig spot?
Seadollar: Similarobjects and ahjussi have always been planning to pursue an event through online means. Virtual clubs where people can do gigs, especially on Minecraft or VRChat, have started since 2014. Back then, I invited similarobjects, dot.jaime, and other friends to play Minecraft, which mostly sparked the fuel to eventually create the club.
Similarobjects: Naturally, I just felt like it was time to throw in the towel and find another way to push the culture forward. I grew up on computers. If I could pinpoint one main inspiration, it would have to be “The Palace” (The Palace or Palace Chat, Chat Palace, Palace. It’s a computer program in which users may interact with one another using graphical avatars overlaid on a graphical backdrop.)
The software concept was originally created by Jim Bumgardner and produced by Time Warner Interactive in 1994. The virtual experience just grew on me. I spent a lot of time chatting with people and messing around on this platform when I was six years old. 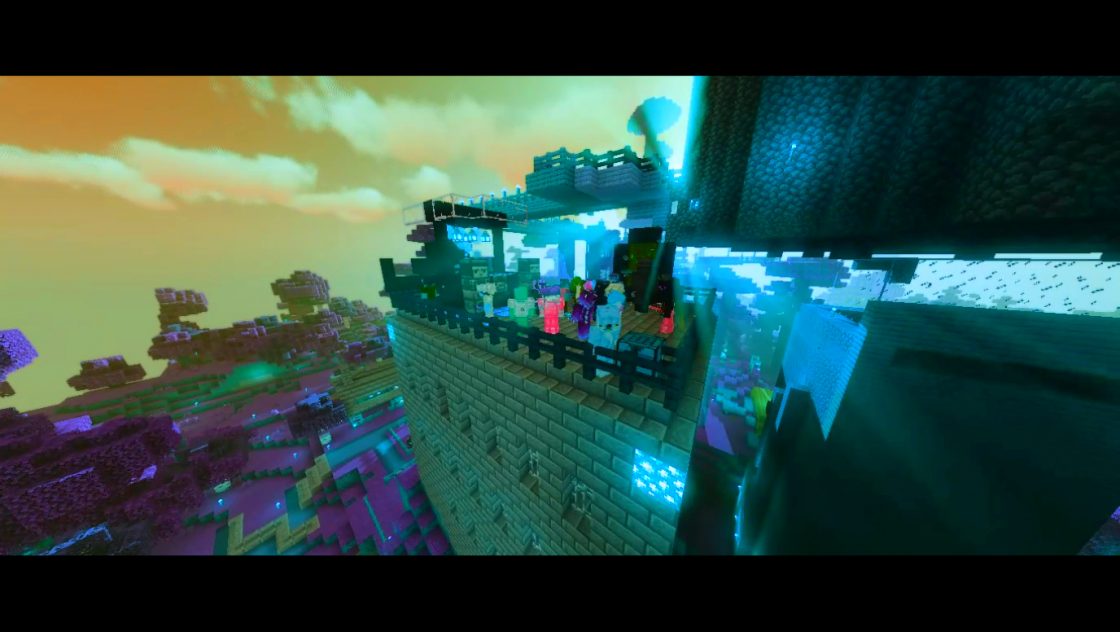 An overview screenshot outside Club Matryoshka, overlooking the pixelated sunset

How is Club Matryoshka changing the gig experience, apart from its virtual aspect?
Similarobjects: It’s definitely a tough task trying to fit in when most clubs in Manila have their own (sometimes unrealistic/cheesy standards) to uphold. I wanted to accelerate and mutate the club context further into a monster of its own.
There is a huge untapped market of music heads who don’t necessarily like the idea of going out to machismo dickfest clubs. There are only really a handful of venues here that are safe spaces and succeed at putting music first, not to make music an accessory or a status symbol.

Read more: This virtual music club by similarobjects is built on Minecraft

Why choose to mount it on Minecraft?
Similarobjects: I just tried to put myself in the position of the modern-day “Juan.” Everyone has computer access in Manila, and a lot of people have access to cracked software.
It’s normal for people here to use pirated software, so I was toying with the idea of it still being slightly illegal. Apart from that aspect, it was a platform that I personally enjoyed and found very accessible for most. The possibilities of Minecraft are seemingly endless because of its ability to be modded and edited. Anything is possible.
Seadollar: It is not only confined to Minecraft, because we organize and talk to the participants through Discord, then play the music through Mixlr. We’re definitely finding more ways to enhance the experience and keep innovating with every gig. We’re all just here to have fun. 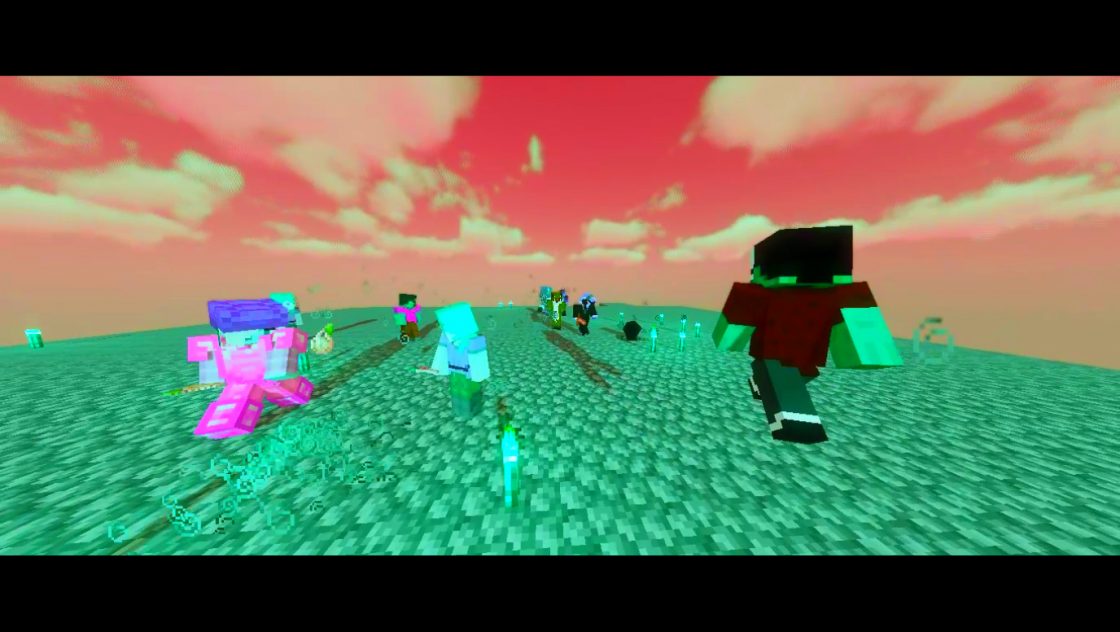 How can people get in, exactly?
Seadollar: People sign up on forms where we ask them questions. The questions can range from “What are your superpowers?” to “Explain why you want to join in Pig Latin.” We screen the responses and see who’s answered our questions properly. We want to know if they’re a fit for the club and the environment that they’d be in.
Similarobjects: Every show has a different set of mechanics, mini-games, and theme. For our second show “Druidism,” we did it as a benefit for the Amazon rainforest. We had mini-games aimed at gathering donations. Our recent “Mischief Night” last October was a zombie outbreak-inspired gig. The audience had to fight for their lives and seek shelter at a safeguarded hospital where the DJ booth was situated at the top of it.

Who’s your favorite Club Matryoshka performer so far?
Similarobjects: I think our October Show had the most powerful Club Matryoshka lineup yet. We featured modern experimental music stalwarts Meuko!Meuko! (TPE), DJH (DE), SWANMEAT (USA/DE), not to mention the equally amazing local lineup NIMA, Skinxbones, Mocksmile, VVVV, Teya Logos, JOHNPOPE, and me (lol). This was by far my favorite.
Seadollar: I am my favorite. [laughs] 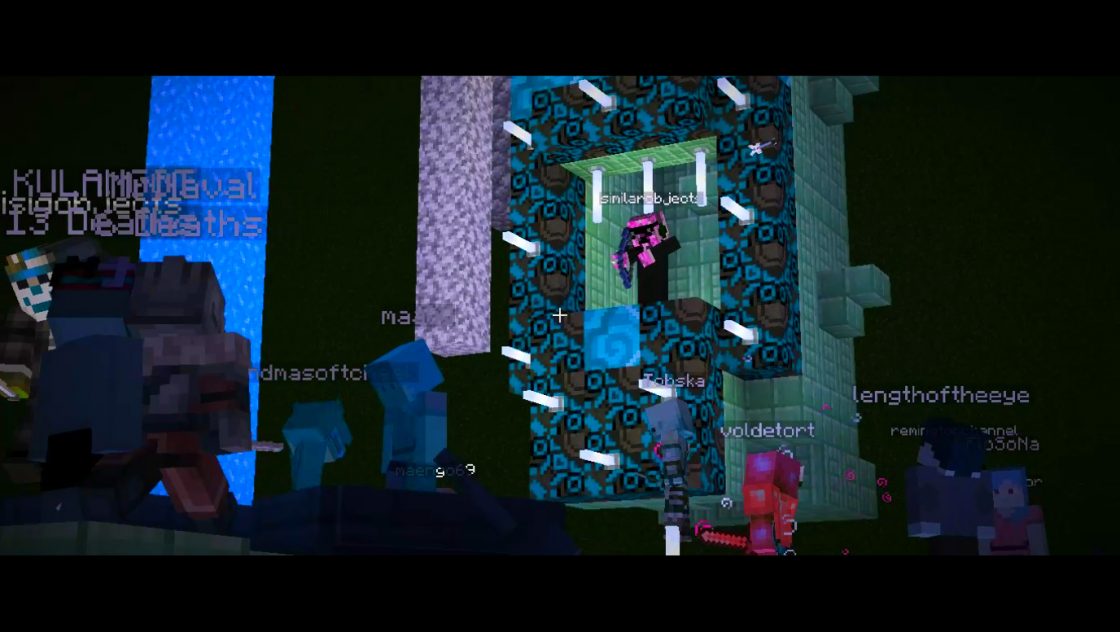 Co-founder similarobjects looking over the club

What does the future hold for Club Matryoshka?

Seadollar: Club Matryoshka is still opening dolls inside of itself and trying to discover what else there is. More events are coming, more artists are playing, and there’s more fun coming.
Similarobjects: We’ve already been getting a lot of interest in this project outside Manila. More artists, locally and internationally, want to check out what we’re doing. I hope it catches on. I feel like this is a step in the right direction and I hope to improve it further.
Maybe soon we can do a festival too. I’m open to seeing how things roll out!

SHAREText by Ken Coseto Photos by Kelsey Cheng Coffee is a staple in every...

SHAREBy Coleen Ramos 2015 was a momentous year of triumph for the LGBTQ+...