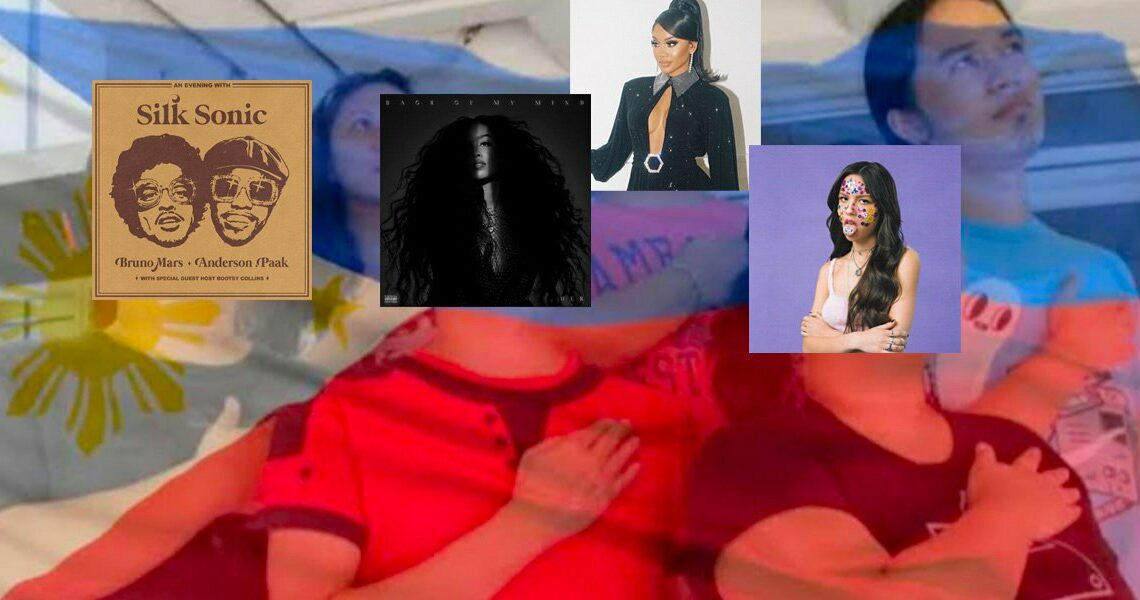 Grammy szn is now upon us, Stan Twitter and playlist-obsessed folks. While we’re still rolling our eyes over the yearly spell of snubs (BTS bagging only one nomination? Miley Cyrus’ “Plastic Hearts” getting nothing? Drake’s “Certified Lover Boy” being blanked too?), we might just bother watching the 64th Grammy Awards for the reason the meme above exists: Four Filipino-Americans getting that sweet, sweet nod.

In today’s list of nominations, we spotted the 18-year-old pop star Olivia Rodrigo—whose father is a Filipino-American—dominating multiple categories. The list includes Record of the Year, Best Pop Solo Performance, and Song of the Year for her chart-topper “drivers license,” Best Pop Vocals Album and Album of the Year for debut full-length “Sour,” Best Music Video for “good 4 u,” and Best New Artist, totaling seven nominations. She’s also the second youngest Grammy nominee in history, next to Billie Eilish.

Meanwhile San Francisco-raised singer-songwriter H.E.R., who’s part Filipino and part Black, snagged eight nominations, including Album of the Year, Best R&B Album (“Back of My Mind”), Best R&B performance, and Best R&B song (“Damage”), among others. This continues her successful Grammy streak from her previous take-homes for “I Can’t Breathe” and “Better Than I Imagined.”

Born to a mother of Filipino and Chinese descent, rapper Saweetie’s track with fellow Grammy nominee Doja Cat, “Best Friend,” is also Grammy-approved. She also sits beside Rodrigo in the Best New Artist category. Adding to the list is Bruno Mars, who proudly declared he’s Filipino in an “Saturday Night Live” guesting circa 2012. Silk Sonic, his collaborative R&B project with Anderson .Paak, scored nods for their soulful and funky debut track “Leave The Door Open,” like Record of the Year and Best R&B Performance, among others.

But look, cheesy “proud Filipino” copypastas aside, the recognition does matter in the bigger picture. In an award-giving body long accused of racial bias—especially with Black artists (also peep: Tyler, the Creator’s statement in the 62nd Grammys)—their names on the roster mean more than we think. One of the vignettes we can review is Billie Eilish’s acceptance speech for her Record of the Year win in the 2021 Grammys. Highlighting how Megan Thee Stallion should’ve gotten the title instead, she said, “I was going to write a speech about how [Megan Thee Stallion] deserves this, but then I was like there’s no way they are going to choose me.”

Not only does representation in award systems affect today’s female musicians and musicians of color, but most importantly the future generation’s aspirants who want to be offered the same space for acknowledgment and celebration. In an interview with Variety, H.E.R. expressed what her 2021 Oscars Best Song victory for “Fight For You” symbolized: “It means that there’s another Filipino girl out there and Black girl out there who says, ‘I can do that too.’”

On Instagram, Rodrigo also brought up what her seven Grammy nods mean to her: “Many dreams have come true for me this year but this one is probably the most meaningful.” It probably means the same for Saweetie, who’s always made efforts to make her heritage known—from her sound down to her Met Gala ’fit. Definitely the icons, the legends, the moments of the year.

The 64th Grammy Awards is happening on Jan. 31, 2022. For the full list of nominees, head to their official website.

I turned these Grammy-snubbed lyrics into classic poetry

Let’s talk about Tyler, the Creator’s statement on racism at the Grammys

What’s so wrong about being proactive?